If you have arrived at this page by following the #Think500YearsAhead campaign on Twitter, then thank you for taking that extra step and actually clicking on the link to find out what this is all about. You can read all about why the Thunderclap was launched in the original post below.

In the meantime, here are a few facts for you to take in, and please, really think about these facts, don’t just brush over them:

• Over 80% of marine pollution comes from land-based activities
• Drastic loss of 97% of UK wildflower meadows since the second world war
• The average time for a plastic bottle to completely degrade is at least 450 years
• 50% of world wildlife has been lost in the last 40 years
• long-term and ongoing decline of UK butterflies, with 70% of species declining

Some seriously worrying statistics there, and all of them have been caused by one thing, us. Nature has no borders or boundaries (apart from man-made ones). Unlike the EU, we are not either in or out of nature. We are part of it, we need it, and it has never been more urgent that nature is put at the heart of decision making.  This planet isn’t ours it isn’t owned by anybody. It’s not our right to keep taking from it and give nothing back.

Its common sense, if you take more than you give back, eventually there will be nothing left.  So please, as you go about your daily life, enjoying all the modern luxuries that take pieces from the natural world, please, please think about how you can give something back.

“The world as we have created it is a process of our thinking. It cannot be changed without changing our thinking.”
Albert Einstein

So we now have a date for the EU referendum, Thursday 23rd June. I wonder what the outcome will be and I wonder what this could mean for the natural world. How will this impact wildlife/climate policies, as most of these are made at EU level.

I gave a talk at Westminster last year asking our MPs to put nature at the heart of their decision making and not to leave it last in the queue. Sadly though, the natural world seems to have fallen further and further down the political agenda. Below are just a few examples of decisions that have been made since then:


It really worries me how short sighted so many political and business decisions can be.  They allow everyone to keep taking from the natural world and don't do nearly enough to protect it for future generations. We can't survive without nature, we all are a part of it, we all have to look after it. It's as simple as that.

I can't have a vote in the referendum, so I am asking you all to help my generation's voice be heard in a different way, by joining my Thunderclap in shouting out a clear message. The message is that we want to see people with the power to make a difference thinking 500 years ahead and not just 5 years ahead. 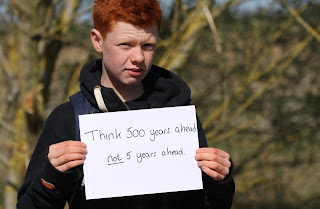 I have set up a Thunderclap to help this message get heard. For those of you who don't know, a thunderclap is a way of getting a single message to be shared by hundreds, maybe even thousands of people at exactly the same time on on Twitter. If the Thunderclap is really successful, we stand a chance of getting it trending on Twitter and therefore get even more people thinking about the importance of thinking further ahead, so that future generations are not clearing up our mess.


"I want MPs to put the natural world at the heart of decision making and #Think500YearsAhead not just 5 years ahead."

I now have about 60 days to drum up support for this Thunderclap and it will then be posted on social media accounts on 19th April, about half way through the build up to the referendum vote.

So please, please click here and sign up to the Thunderclap and help me to get my generation's voice heard.

Thank you, and keep thinking 500 years ahead. 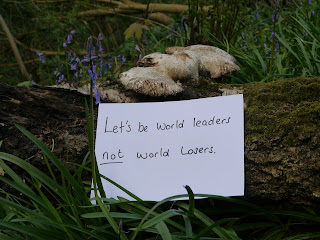