High Tides and a Blog Off

Over Friday and Sunday, I was volunteering for the RSPB with RSPB Burton Mere's Dan Trotman at two slightly different events. Firstly, on Friday, it was a high tide at Parkgate, where we were engaging with the public, and showing what species of bird are actually out there on the marsh, and what an important habitat the Dee Estuary is. During the weekend there was going to be a series of high tides, with Friday being one of the highest at 10.3m (which is huge). There was no storm surge expected to go along with the high tide, however with it being so high we still expected it to reach the promenade wall.

Due to it being nice weather on Friday, I managed to interact and talk to lots of people all about the estuary and birds, however, before it got too busy, I got a good chance to talk to the other two people on the stand, Paul Brady and John, who are both working for the RSPB. Paul originally worked for Burton Mere Wetlands, which is where Dan Trotman works now.

As it was a very high tide there were people lined up everywhere along the walls and sitting areas. Most people were however at the old baths car park, where there was also another RSPB stand. I think the Short Eared Owls were the main attraction down there. (Austin Morley has some great pictures of them on his blog). 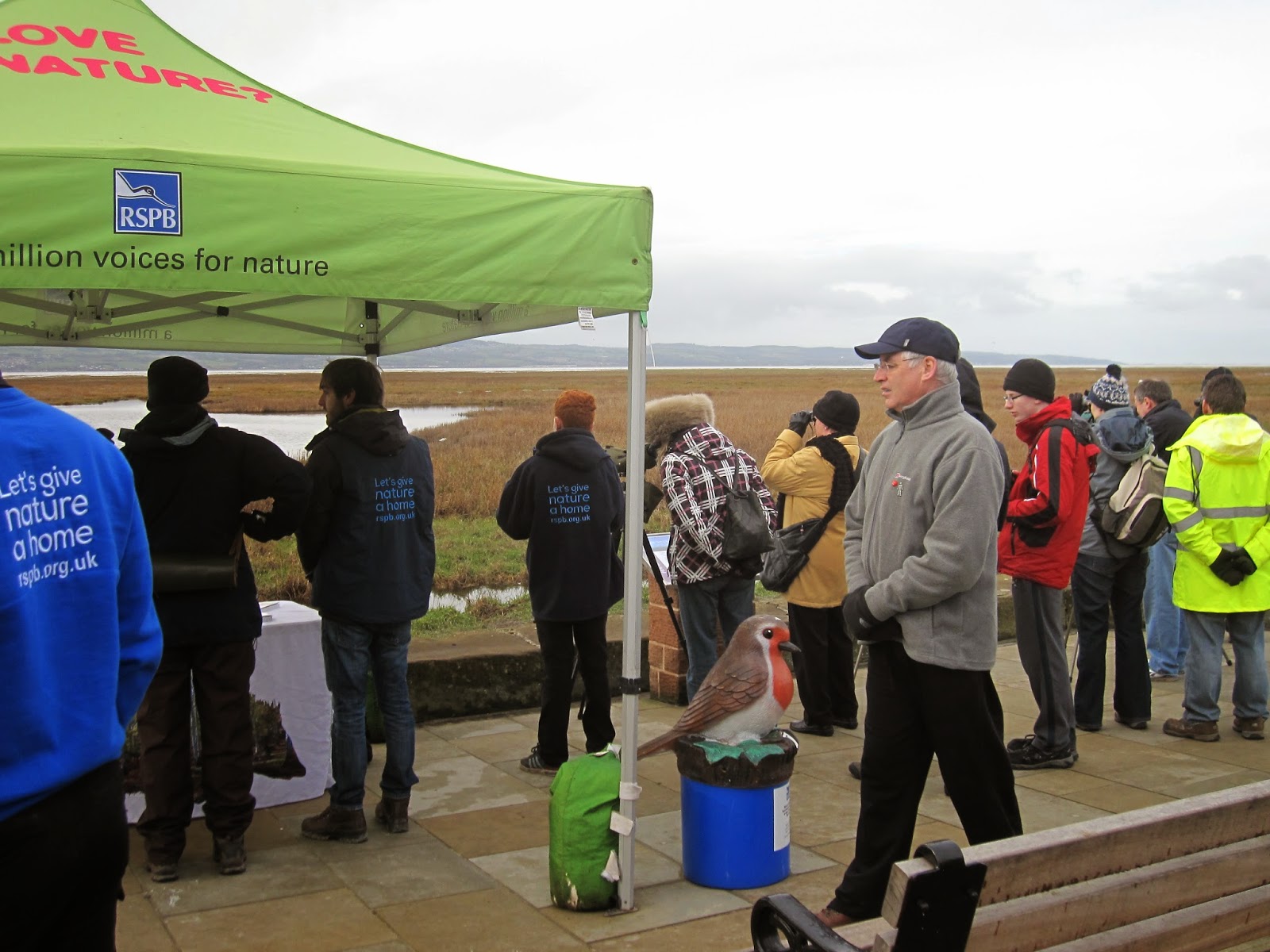 Instead of big gushing waves, the tide slowly creeps in at Parkgate, gradually making it's way up the marsh,before flooding into the flashes dotted around the marsh areas. We were watching the flashes closest to the Donkey-stand.

Whilst the street had quietened down for a bit, I decided to set the scope up and have a bit of a pan of the marsh. I managed to pick out a stunning Peregrine, then my dad picked one out, who I have to say was on fire with spotting things on Friday. After a couple of minutes of spotting things I came across a smallish hunched bird sat on a post quite distant for the scope. Me, Dan, Dad and basically the whole RSPB team had a twenty minute debate about what it was. Merlin or Short Eared Owl. We eventually confirmed it as a Short Eared Owl, we could tell with how dark it was around the eyes, and the wing shape when it took off from it's perch.

When the place got a bit more busy and I was talking to people a lot more, I noticed a familiar face pop round the corner, it was Austin Morley, long time no see. I first met Austin at Burton Mere when he volunteered there, but he now has a job with the Wildlife Trust. Austin was having a brilliant time and it was great to catch up with him.

Most of the people I did speak to had also been to see the Laughing Gull at New Brighton or the Long Eared Owl at Burton Mere before arriving at Parkgate for the high tide. 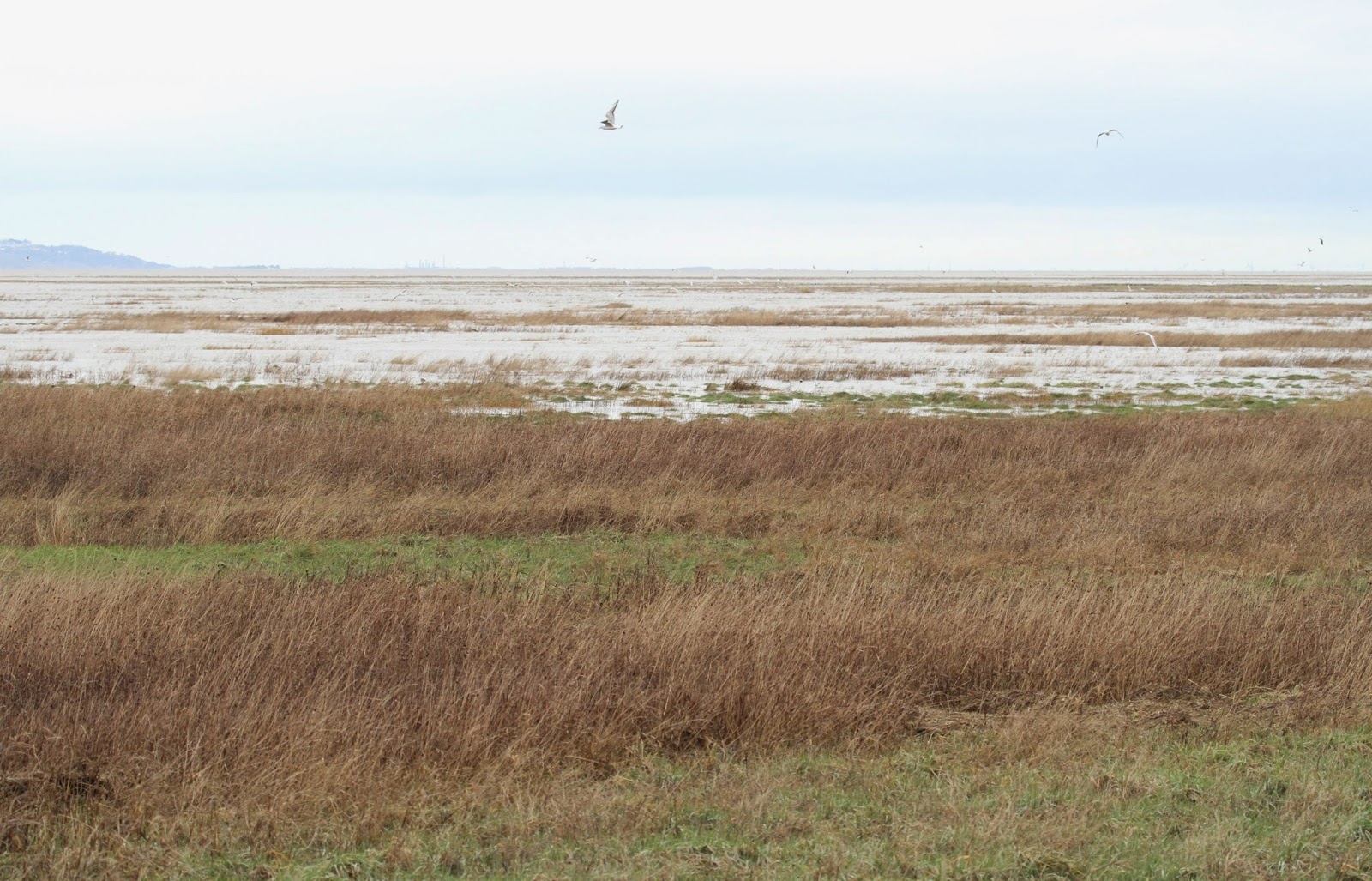 Tide creeping across the marsh

As the tide oozed in, the water pushed all the secretive birds out and on to any floating substance they could find. The poor water rail below got pushed all the way to the wall where we were standing, so we got a great view and some close up pictures. A fantastic little bird to watch. 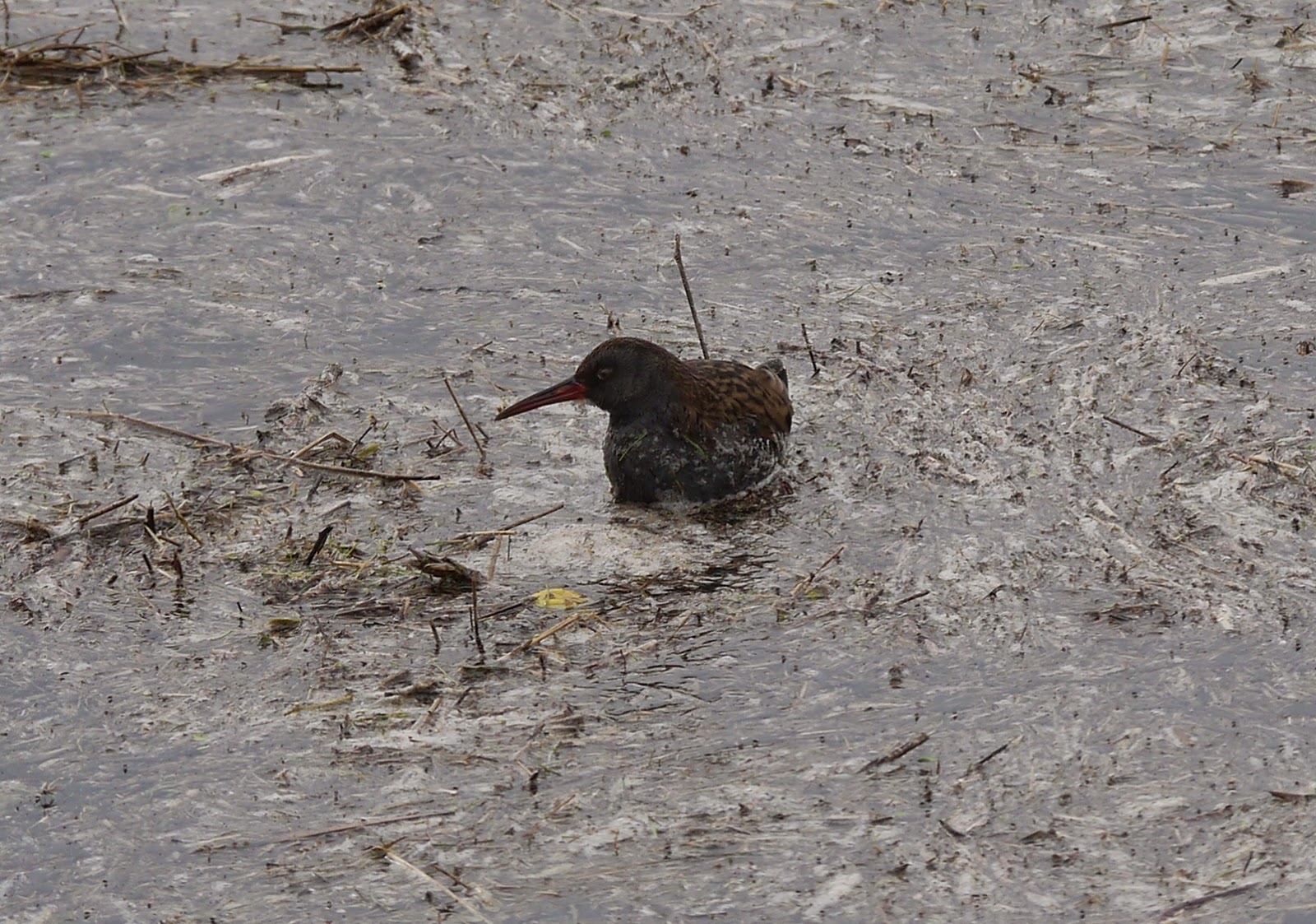 As well as this water rail getting pushed out, all the rodents were becoming victims of the tide, so the raptors and Black Headed Gulls started to circle like flying sharks. I watched the darker, but survival side of nature as the tiny mammals got picked from the water one by one.

As the tide started to recede, so did the people. The long line of cameras and scopes disappeared and I had a few quieter moments to scan the marsh once more.

On Sunday, the event was slightly different in more ways than one. It was still a high tide, but the main event was Skydancers on the Dee where we were raising awareness about the unacceptable decline of Hen Harriers. Again there were RSPB stands on the Donkey-stand and at the Old Baths car park.

Sunday's weather couldn't have been more different. It was freezing and was absolutely pouring with rain, sleet and snow, however it didn't "dampen" our spirits. There wasn't really much action to start with, as the tide was still a long way out. We didn't see much, because we were setting all the stuff up, apart from this stunning Grey Wagtail below. 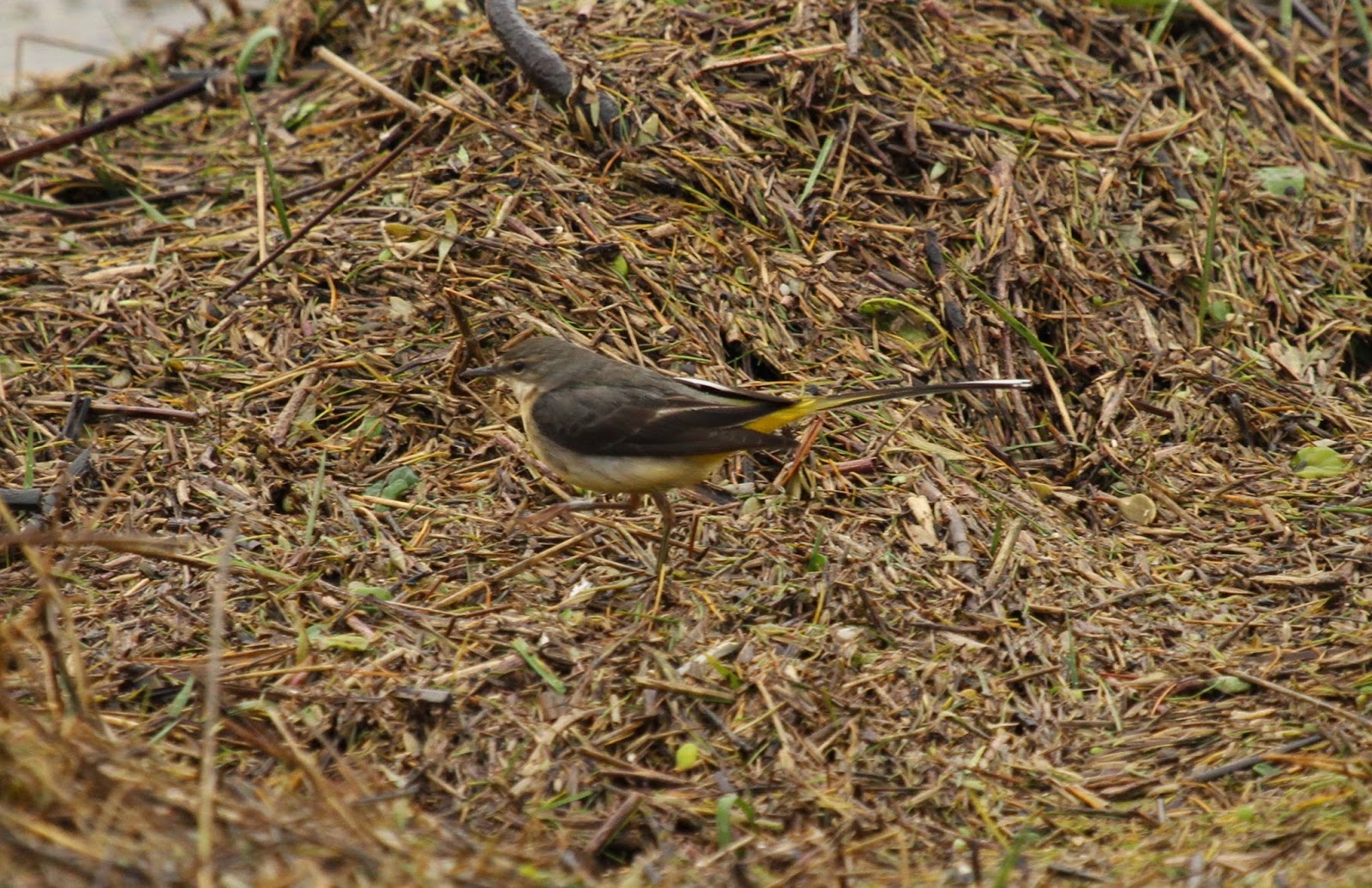 And then I noticed in a car, a Mr Dr Mark Avery (and of course Mrs Avery), who had come up from Northamptonshire to watch Hen Harriers and eat cake with me.  I had saved my birthday cake to have at the marsh, because I was hoping lots of people I know would come and share the amazing high tide experience of Parkgate.  The cold and rain didn't stop Mark from getting straight out of the car to have his first scan of the marsh. One of the first birds we watched together was a distant Great White Egret that kept bobbing it's head up above the marshland grasses. He is a great person to bird with and I hope we can get together again soon.

Rob Lambert and Lucy McRoberts (AFON) had come up to stay for Parkgate and it was great to catch up with them. They are always so interesting to talk to and I really enjoyed catching up with what they have been up to and sharing views on what is happening in the natural world.

Because I had been tweeting about the high tide event to try and encourage people to visit, there were other people I couldn't wait to see, including Keith (@HoldingMoments), Paul, a brilliant photographer (@arborist2222) and Phil Gatley (@PhilGatley) who volunteers at RSPB Conwy (a lovely man and full of knowledge).

After Mark, Phil turned up and we enjoyed a great discussion about Conwy. After Phil arrived, the streets were pretty empty so we watched a nice flock of Teal for a bit. However, after about half an hour Keith and Paul arrived so it was time for more catch up chats. Everyone was in good spirits despite the awful weather. 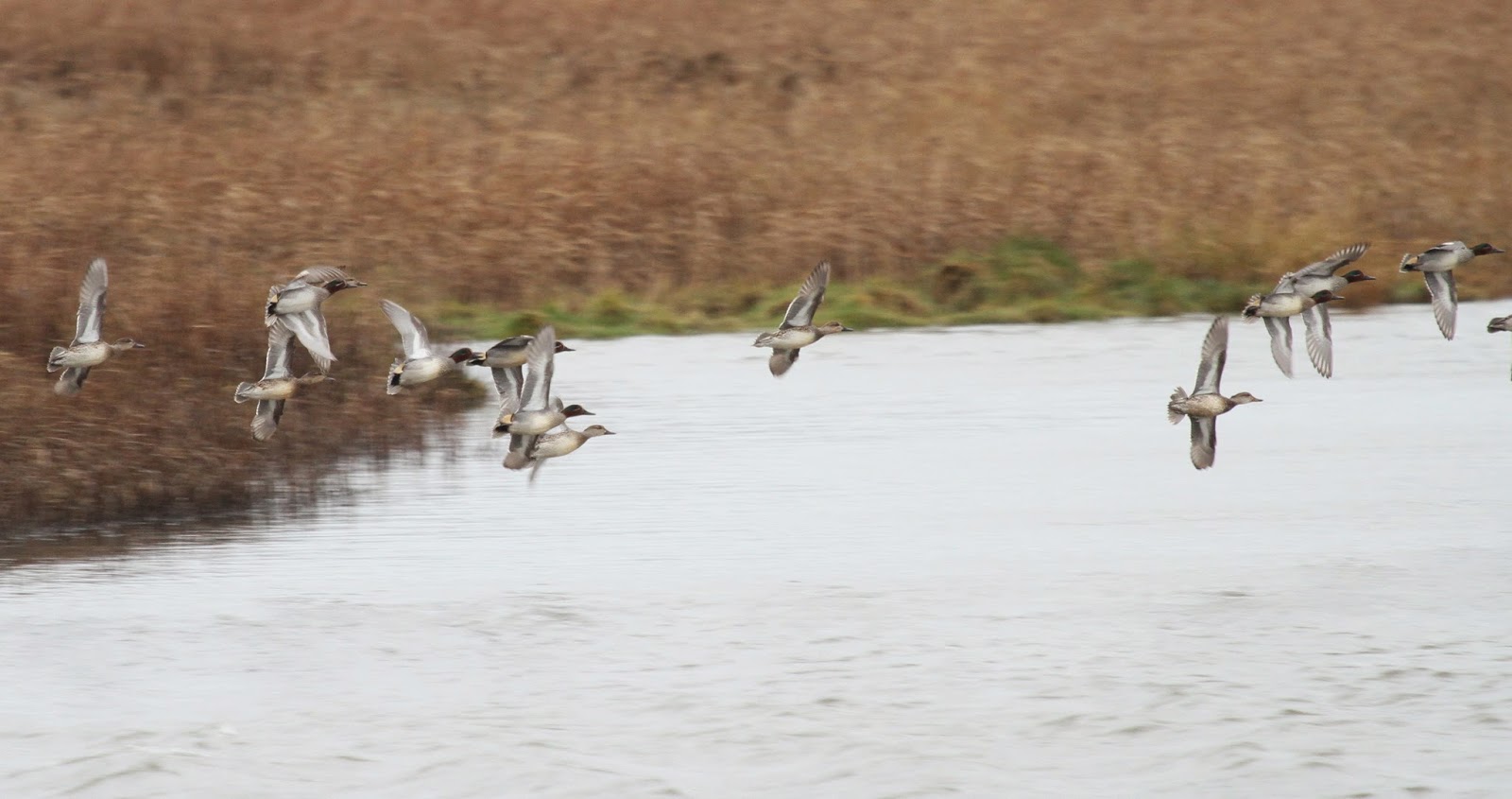 Next to arrive was the very knowledgeable David McGrath, along with Grace and Frank, who straight away settled a debate on another mystery bird. It turned out to be a Merlin this time, sitting way out across the marsh on a washed up branch.  Grace, Frank ( a lovely chocolate lab) and Harley then went off to the pub together to warm up for a bit.  And then it was great to see Kev from my ringing group turn up.

Everyone had of course come for the high tide, which although slightly lower than Friday's, was still a big one at 10.1m. It continued creeping up to the wall and we were all scanning the waters edge to see what it might flush out. "HEN HARRIER" came the shout from Mark, followed closely by "there's actually two of them". Mark then continued to talk everyone through the location of the birds and all the people on the stand (which was very busy by now) joined together for that magical moment of sharing an awesome wildlife moment together.

As the harriers flew directly in front of us, they came quite close and the views through the scope were amazing. Birders and non-birders couldn't help getting caught up in the excitement of seeing these birds. 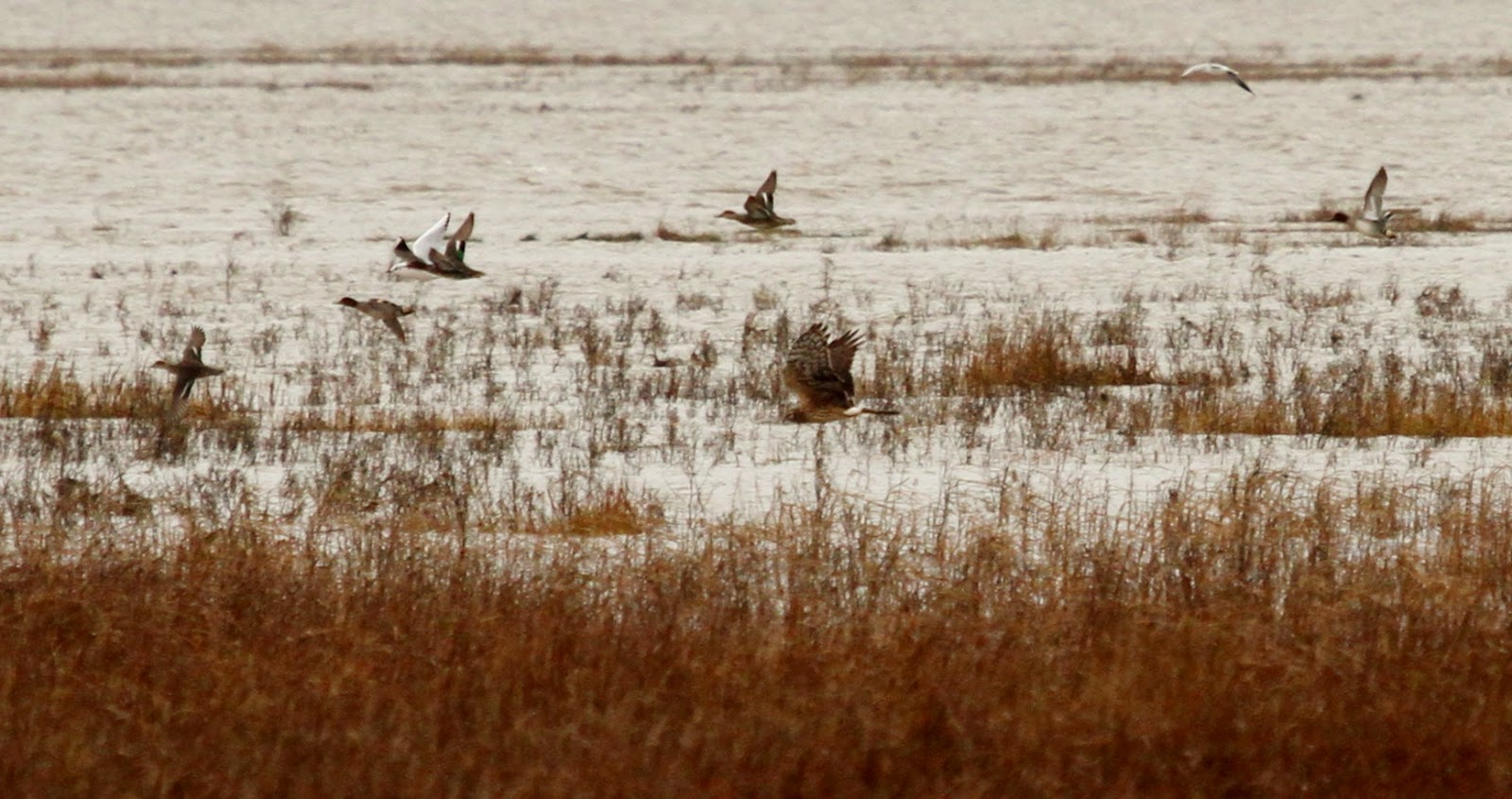 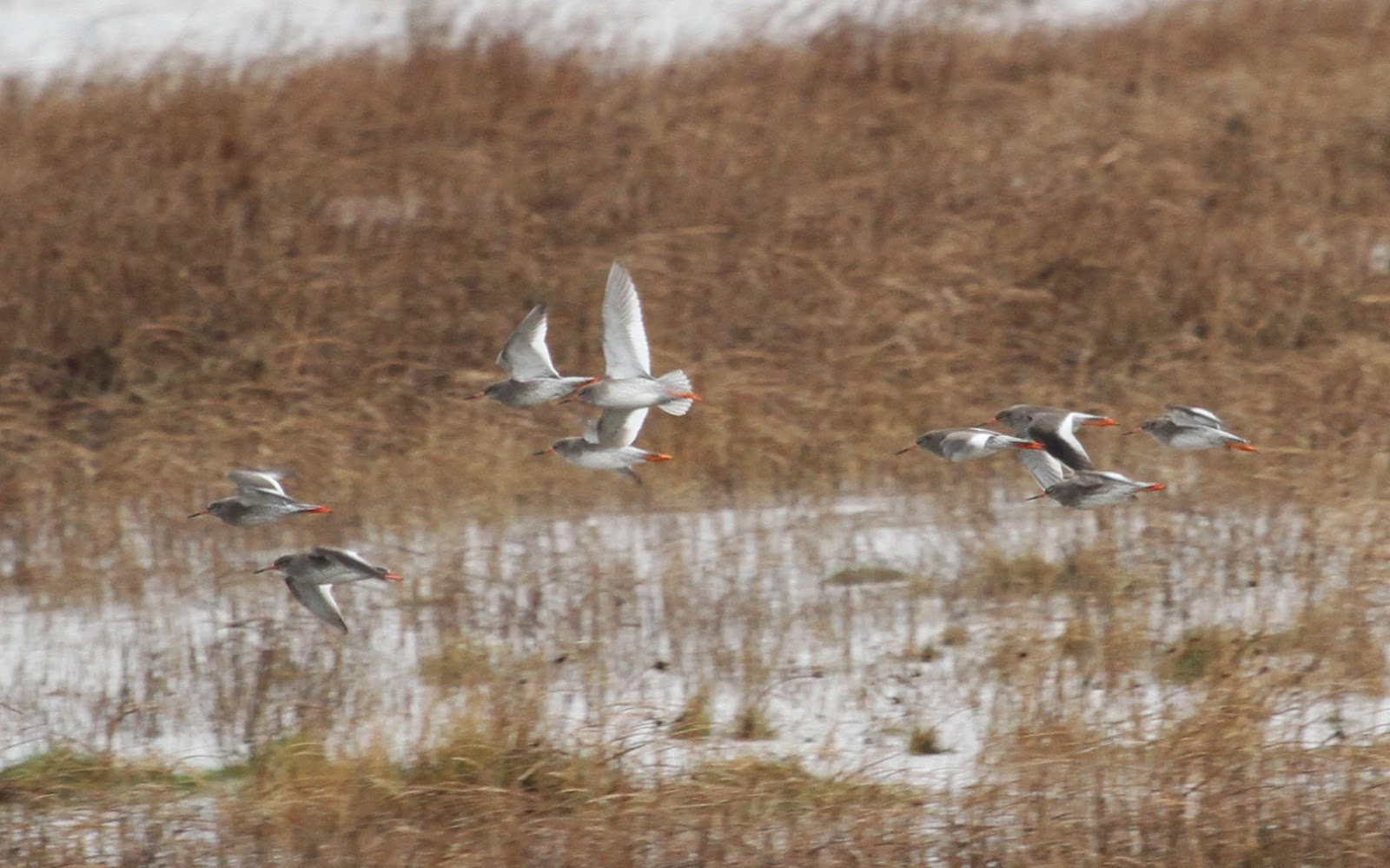 
As the tide reached it's height, every now and then you'd catch glimpses of Black Headed Gulls getting very interested in something in the water, and then you'd spot an almost drowned rat, half swimming, half running through the flooded grass. One poor rat survived all the gulls and raptors only to face a screaming woman when it reached the wall, but it was quite funny. 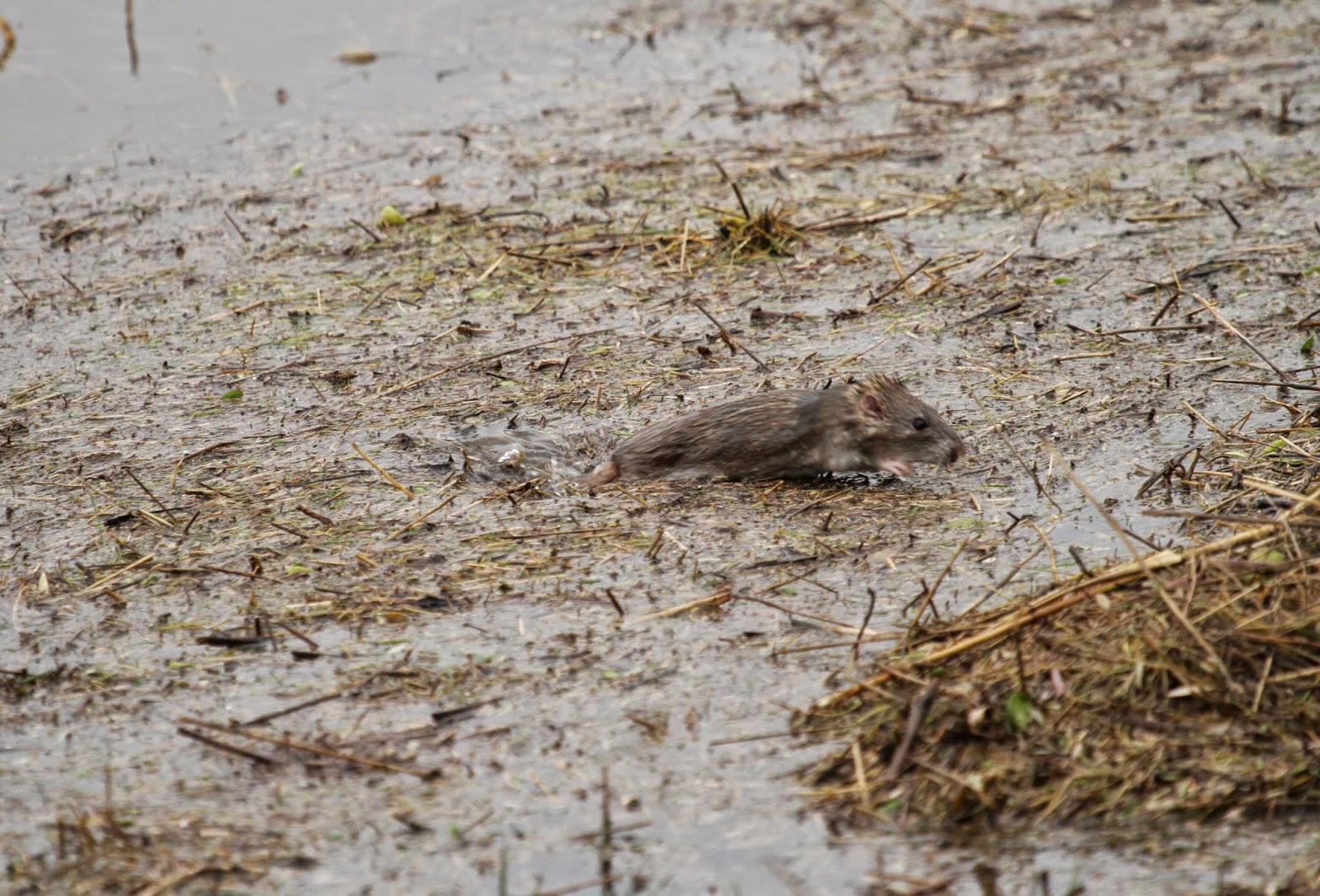 Some of the longer legged birds, like this Little Egret below, decided to stay put and just let the water rise around them. 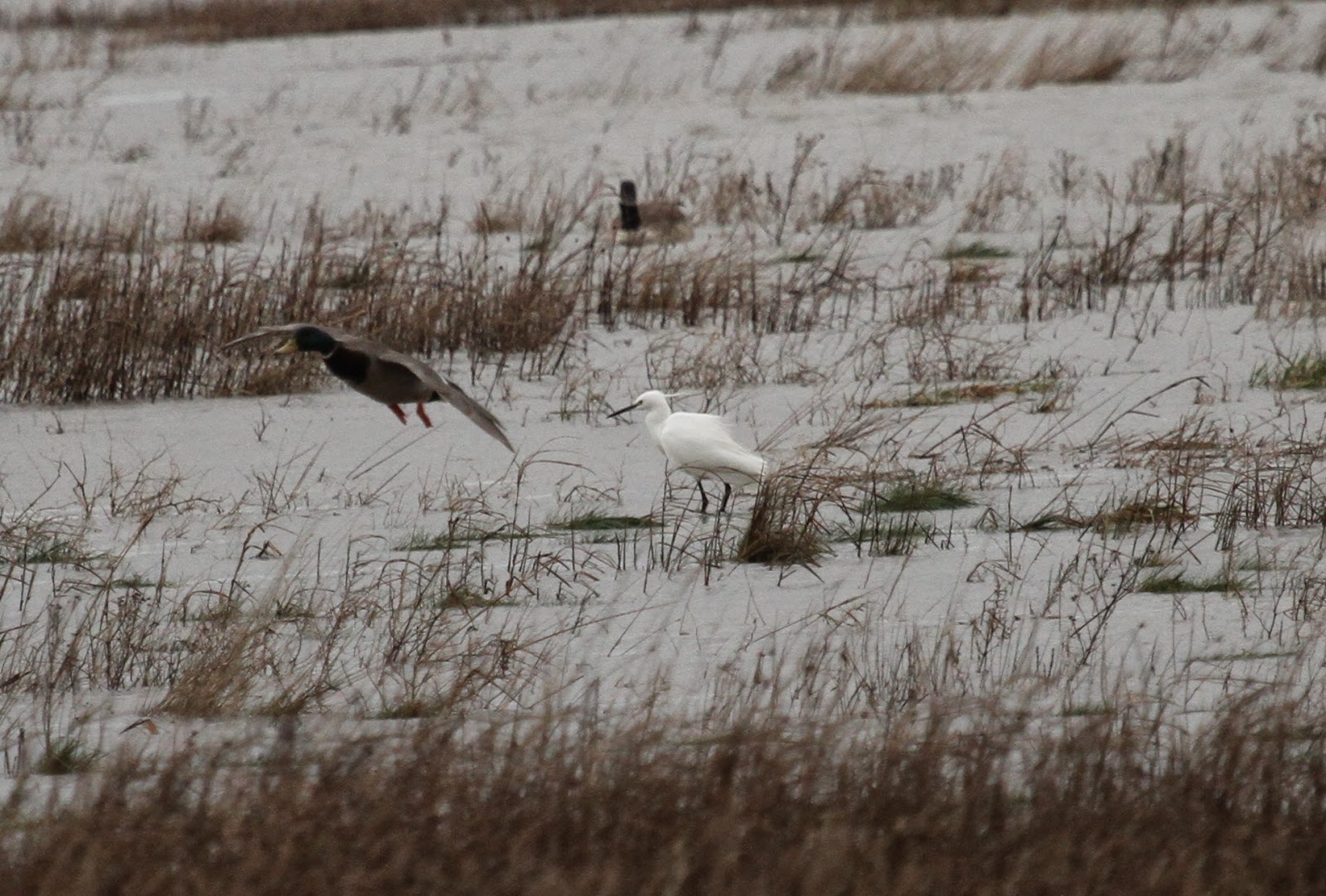 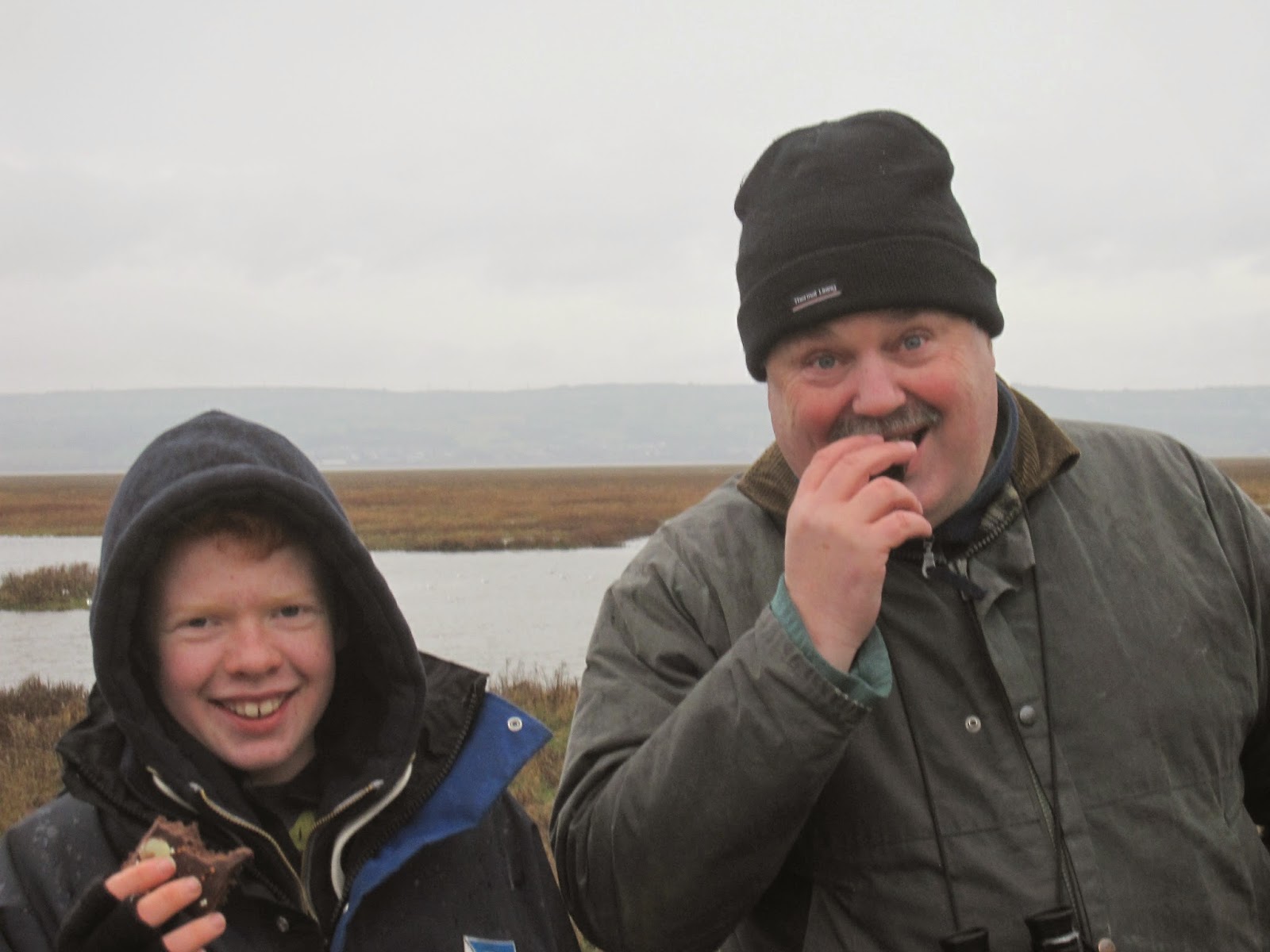 Oh and we ate Chris Packham's slice of cake!