After all the on-line communicating and talk of Hen Harrier Day, it finally came round. The event I attended was located at the North Peak District, however the same sort of thing was happening at Northumberland and Forest of Bowland (you can read about the Bowland event on David McGrath's brilliant blog).

The scenery on the journey to the Peak District was just great, especially when we entered the moors. We left the house at around 5:30am, and arrived just before 7:00am. The day had already started well as I saw six beautiful Red Grouse on the way.

Mark Avery (the organiser) had already arrived with a couple of other people, and was amused to see that I had managed to bring our 6ft Hen Harrier (with the help of dad and dad's van). I had already started to meet new faces and get chatting, when suddenly out of the blue came a male Goshawk. It settled in a Sycamore just in front of me. Another great sighting and it wasn't even 7:30am yet!

By now a few more people had started to arrive so me and my dad (the whole family did attend this event) decided to take the Hen Harrier (Harry) and his stand down ready to where the photo was going to be taken by the dam later in the morning.

Now for those of you who don't know, the actual event was to raise awareness for the Hen Harrier as this species is currently being persecuted i.e illegal trapping, poisoning and shooting, with only three pairs in England breeding this year and scientists saying the suited habitat could home at least 300 pairs, so we all need to do something about it.  If you've never seen one before, go and find one (and watch it's acrobatics as it skims, soars and dives across the purple heather) and then you'll understand just how bad it would be to lose them forever. 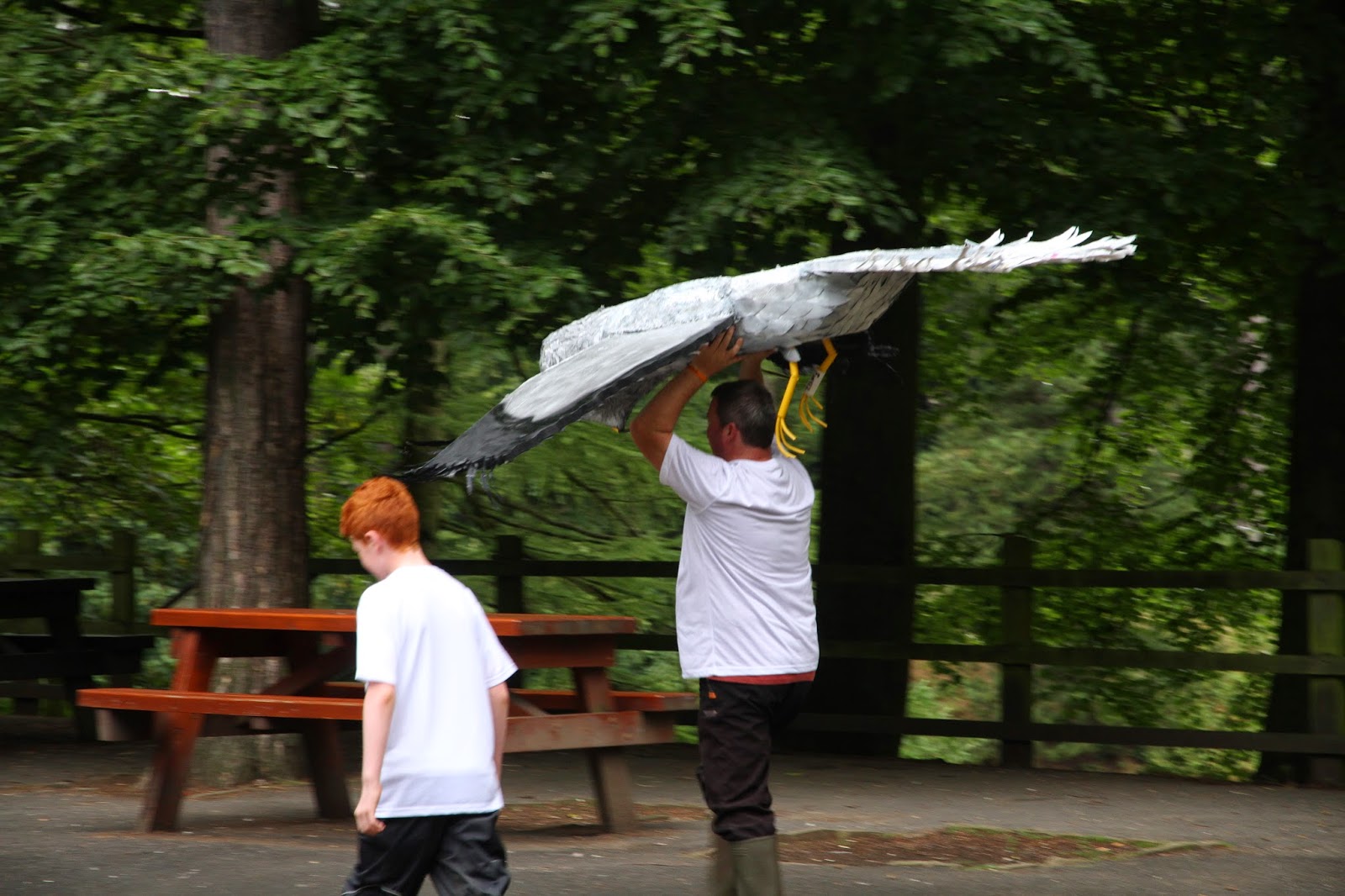 When we eventually got the Harrier down to the dam wall we had to screw the stand together, then get the bird actually connected to it, which I've got to say is much more easily said than done. Before we headed back to the car park I thought it would be great to get people to sign the post of the stand and again show how much support there is for our Hen Harriers. Dad's work pens came in useful.  And furthermore I have thought about leaving the signed stand (and maybe Harry) outside the house of my local MP (Stephen O'Brien) to see what he makes of our efforts. 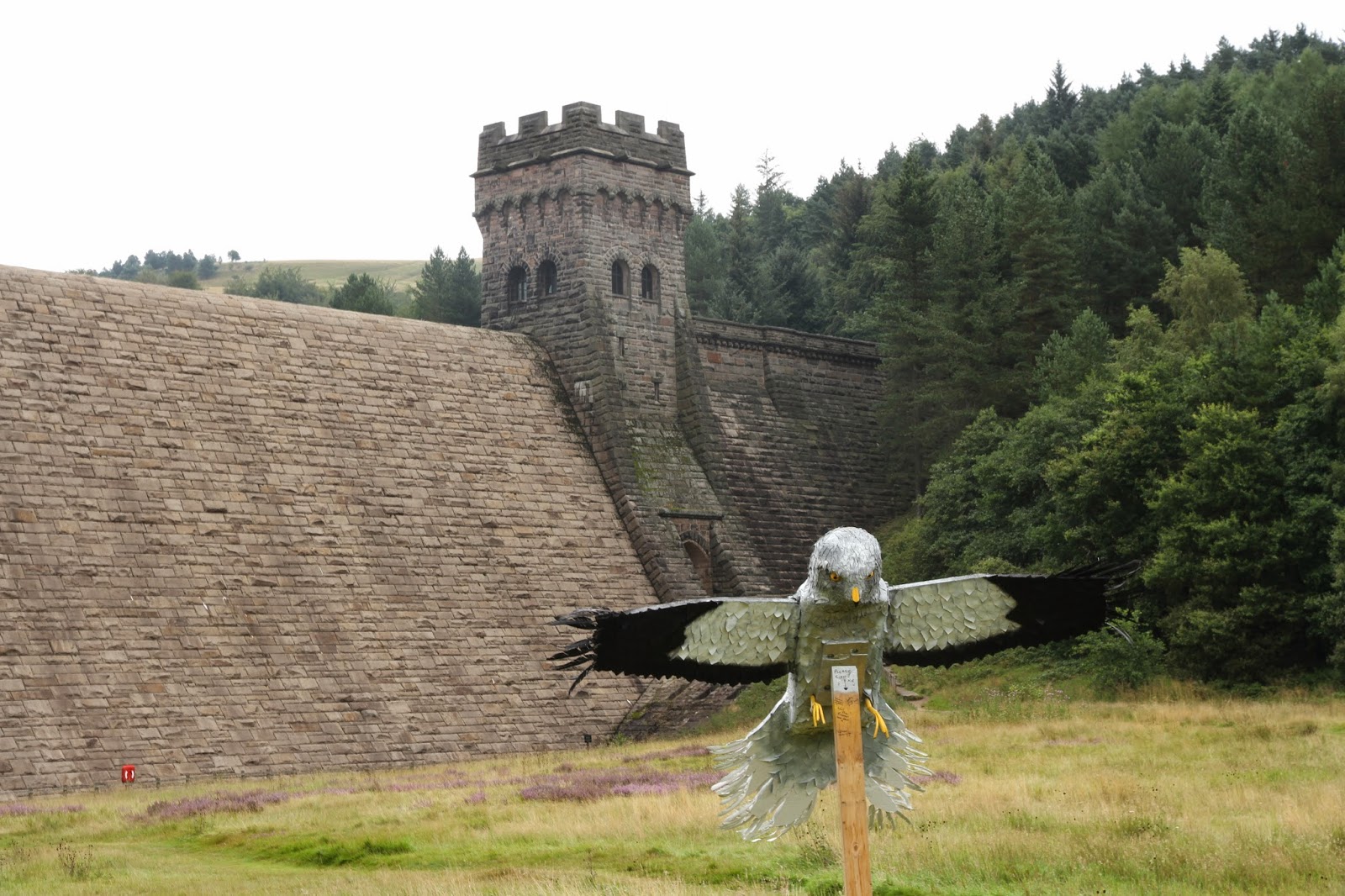 Harry in front of the dam before the crowds arrived


Now if you didn't know I hadn't made the Hen Harrier for the day, it was actually made for a village scarecrow competition to try and raise awareness for the Harrier aimed the citizens of Moulton, however when I heard about Hen Harrier day a couple of weeks back we all decided to take along Harry, and I think  it was the right decision as he seemed to keep everyone together in a big group after the talks were over.

The money I won for the scarecrow competition I donated to RSPB Sky dancer who I met up with and gave the money to at Hen Harrier Day. The lovely person collecting it was called Blanaid Denman and we had a great talk about Hen Harriers, Mark Avery, the event , all the people and how far they had traveled and of course the rain! 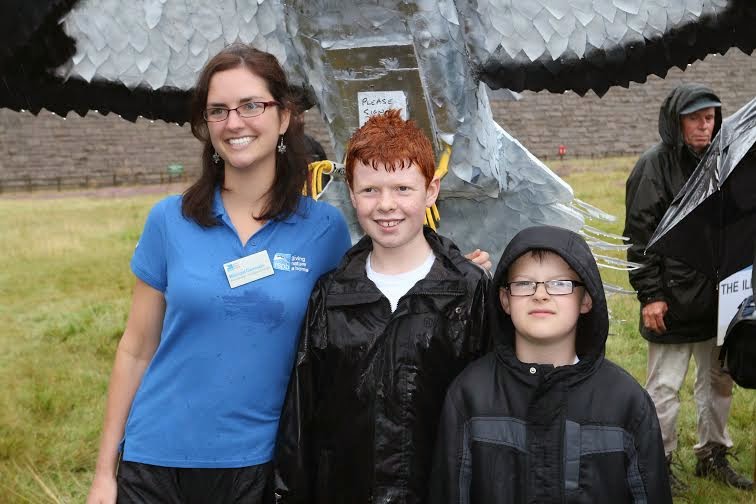 With Blanaid, Harry and Harley


After the first couple of photographs and greetings, lots of people had started to arrived and I was able to get a chat in with Chris Packham who was also there supporting the Hen Harriers; it was really nice to meet him again and I told him to look out for Harry down by the dam.

It was great to meet the likes of Andre Farrah, Alan Davies, the Hawk & Owl Trust, various Wildlife Trusts and lots of other people, and overall, from my point of view, it looked like a great turn out with all the people, film crews, media and even just normal people not aware of the event joined in.

When Ten O'clock came round Mark Avery gathered everyone round for the picture and speech. The first speech was a few words from Mark thanking everyone for turning up in the not so ideal weather conditions, he said it he hadn't done that much to organise the event but that isn't true. Anyone could tell that a lot of hard work, care and passion had gone into the event.

Mark then passed over to Chris Packham, he started off saying a few words, however suddenly he started talking about a big bird behind the crowd. I thought "hmmmmm that's my Harry" and a few seconds later he called my name out, I was so shocked.

After a round of applause for Harry, Chris himself started asking me some questions and passed me the loud hailer. I talked about what I felt about Hen Harriers and how and why I made Harry. I've got to say at first I was a little nervous talking in front of the 570 people that turned up, but at the end when I had finished I felt like my voice had been heard and that I could help to make a difference. 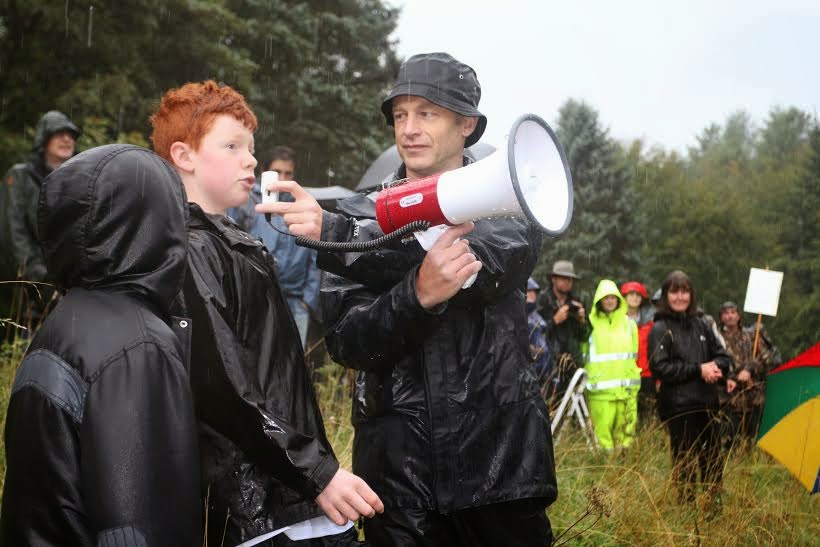 Thank you  to Guy Shorrock for this picture

Now of course I was listening to Chris's speech like a hawk (or maybe a Harrier) but one thing he said stood out to me that I had never heard anyone admit to before. "Conservation organisations and people had failed"; now that stood out to me because I am a young keen conservationist. I knew that what he had just said meant something because it did make people pay more attention, and made me feel that we all need to work harder for the Hen Harriers (and other species), but as Chris said at the end eventually "we will win".

At the end of the speeches everyone dashed back over to the Hen Harrier and I had a couple of pictures taken with Mark and Chris, the Wildlife Trust and a few other people; I found everyone there inspiring in some way and loved meeting everyone trying to make a difference. 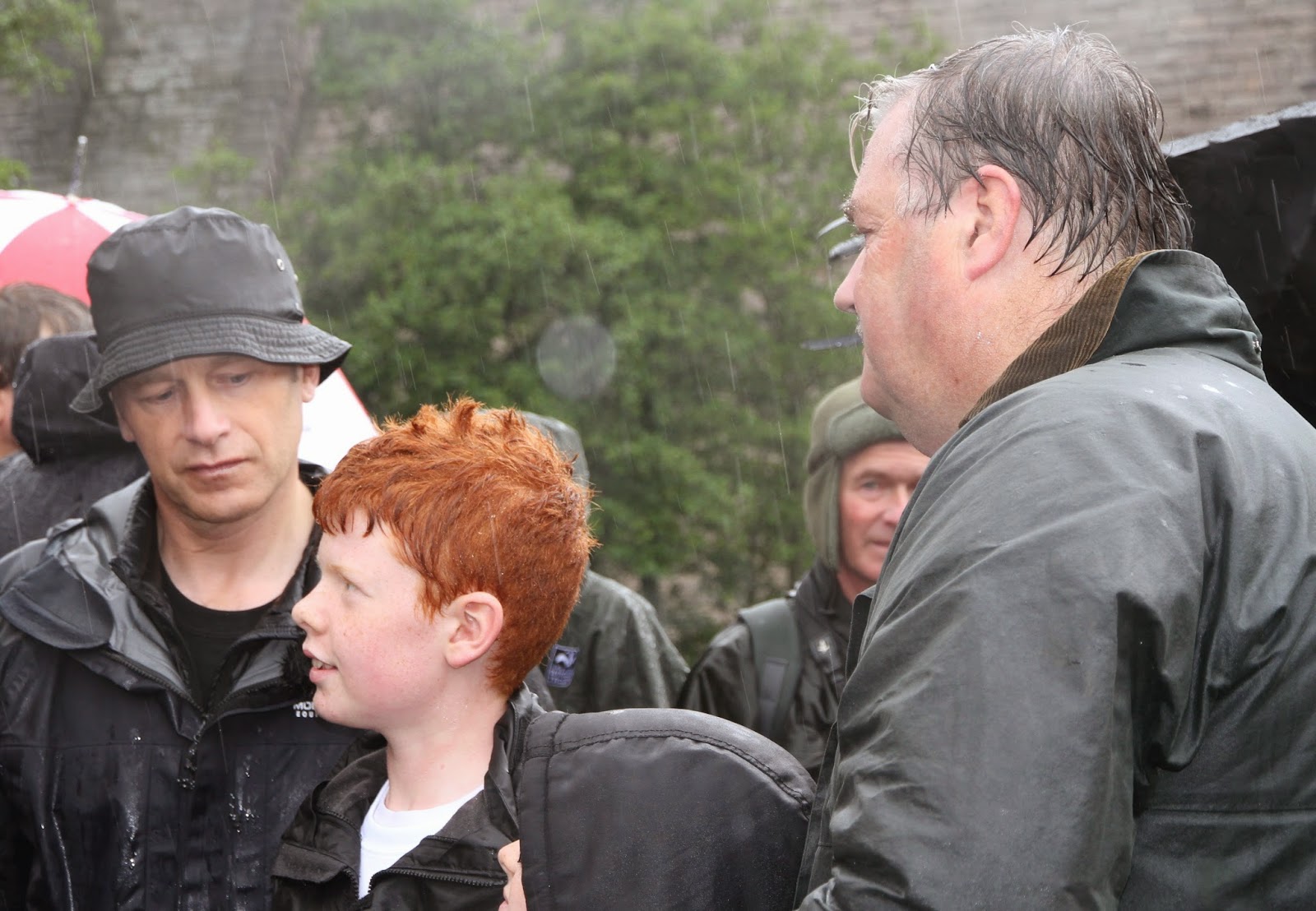 One of the other people I wanted to meet was an MP, the Shadow Environment Minister, Barry Gardiner, it was an absolute pleasure to meet him, and was really interesting to find out his point of view on Hen Harriers and of course overall conservation.  He said the same thing as Chris and Mark "you are the younger generation of wildlife protectors and will do well" which encourages me to keep trying but also reminds me to appreciate people's support and to take in to consideration different points of view, even if I think they are wrong. 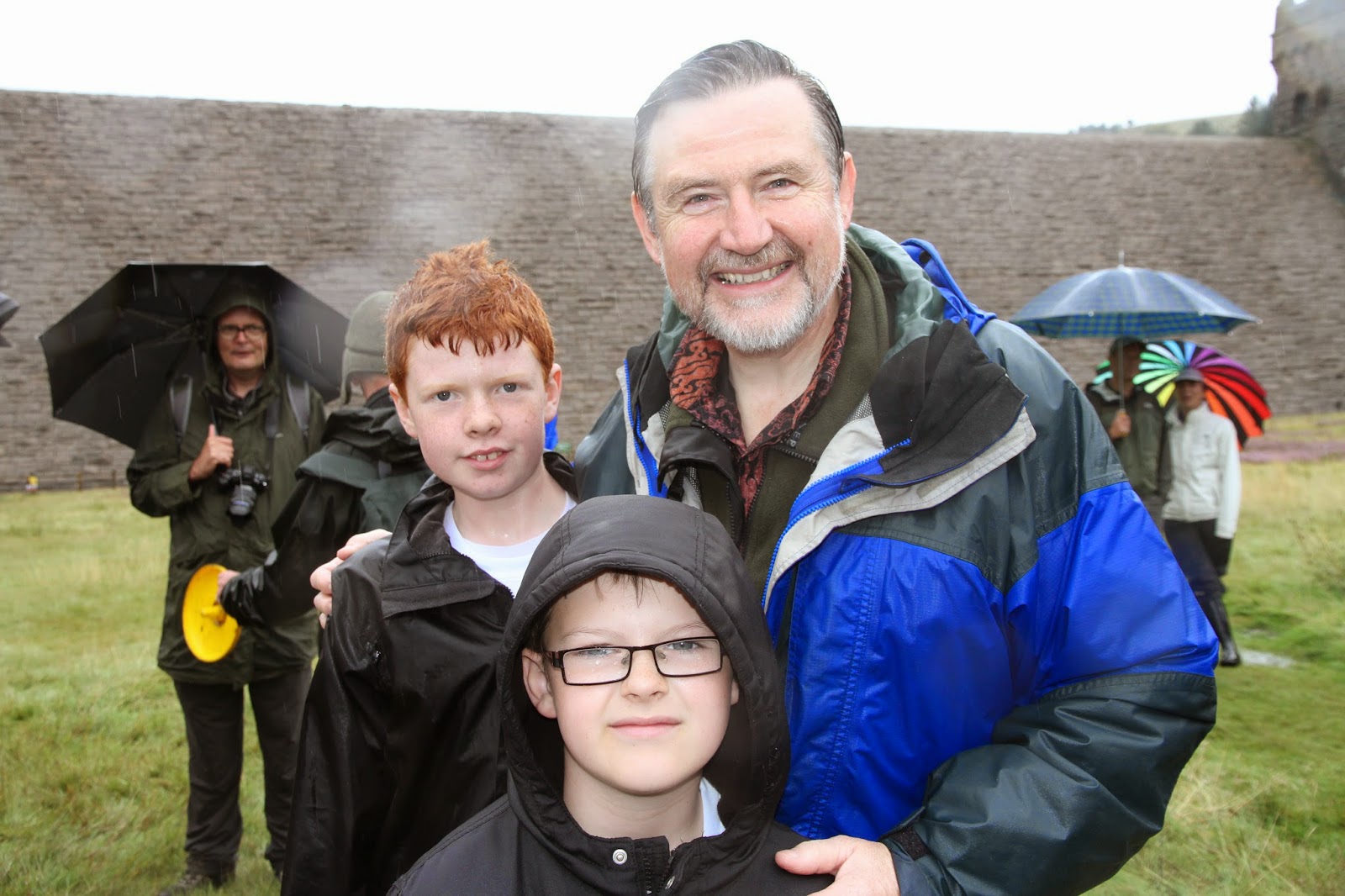 One the journey home all the rain had created amazing waterfalls across the Peak District and the clouds were still clinging to the tops of the hills. I imagined seeing a Hen Harrier coming tumbling out of the cloud and skimming across the moor, calling out to it's mate. In a few years maybe I wont just have to imagine this, maybe we will have made a difference, maybe we will have won.

I am going to finish this blog post off with a list of all about 250 people who signed Harry's perch. I wanted to say a massive thank you to them for caring and think they all deserve a mention. I might not get all the spellings and messages right as the rain and some dodgy hand writing on a post don't go very well together. 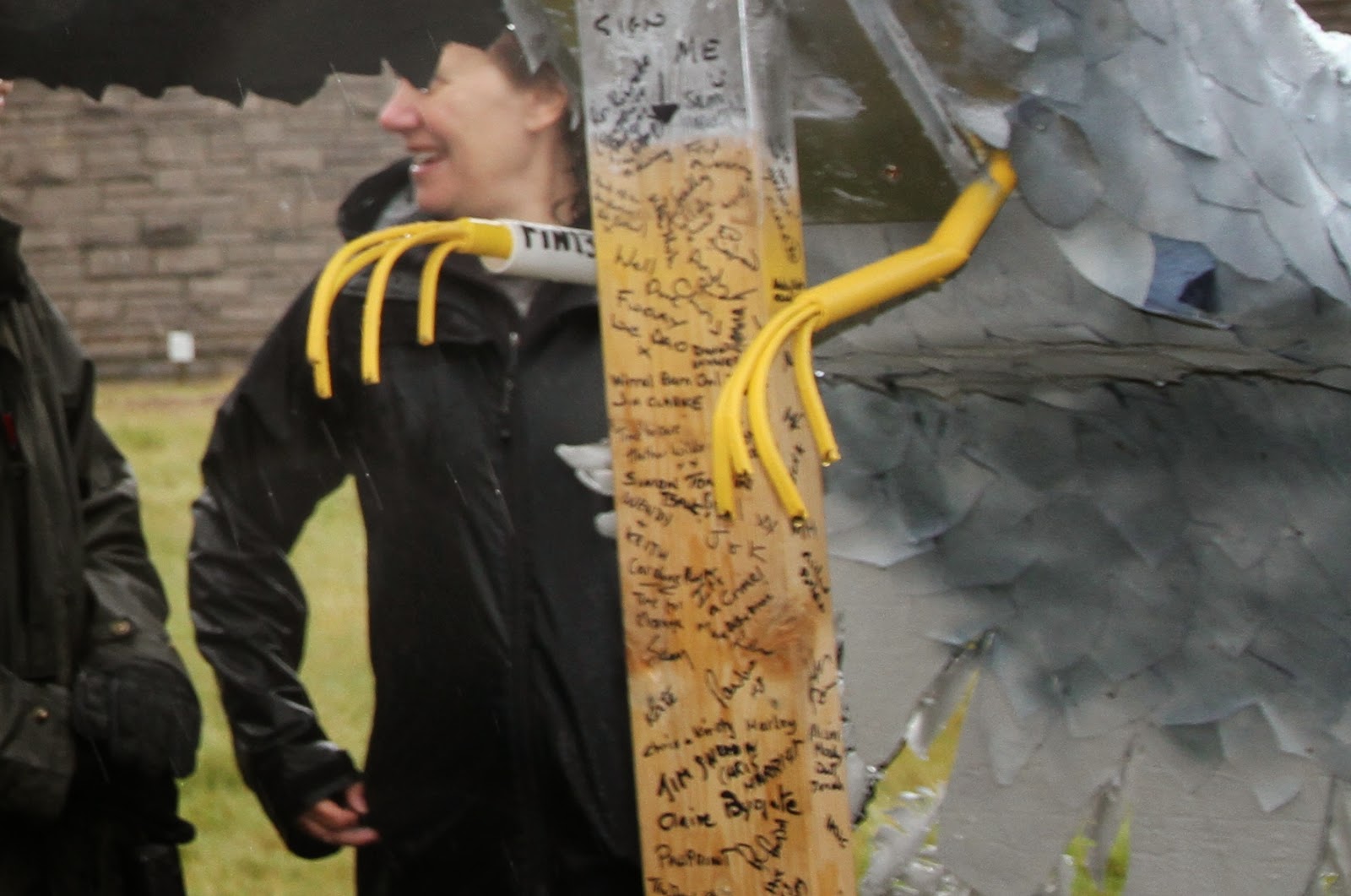 And finally, again a massive thank you to Mark Avery and Chris Packham.

See you all at Birdfair.