Birdfair, my annual birding "holiday", it is the place where all conservationists come together to share ideas and to inspire. Everything is fantastic. Last year we only made it for two days, however this time we decided to do all three, like always our birdfair adventure started a bit slow.

Yep, you guessed it, busy traffic almost the whole way and we were stationery for over half an hour, but this was one of the reasons we came on the Thursday so we wouldn't miss half of the actual event. Like last year we were staying in Scalford Hall Hotel, which is located in some gorgeous countryside which is home to Tawny, Barn and Little Owls.

Now last year I was at the A Focus on Nature and BTO conference in Norfolk at the BTO Headquarters, and met up with some other passionate wildlife enthusiasts, and staying with us this year were Josie Hewitt and her mum Alison. It was lovely to see them again and they were also pretty excited about staying all three days. As well as meeting Josie, it was also lovely to catch up again with Joyce a lovely lady that works at the hotel who reads my blog and is very supportive.  Josie, Harley and I went looking for the owls and were very lucky to see and hear Tawny Owls.

Of course after a good sleep it was time for the first day of Bird fair. Now bird fair is supposed to be all inspiring, relaxing, learning and fun, however this time we had to bring a 6 foot Hen Harrier with us, in a hired van with only 20 minutes to get it into the fair and on to the correct stand. Of course firstly it took a bit of persuading of security to get it in however after a bit of sweet talk we were escorted to the correct stand, the Wildlife Crime Unit which is all to do with illegal persecution of wildlife, especially raptors. Once our Hen Harrier was settled with the wildlife crime police, we were free to enjoy the fair. 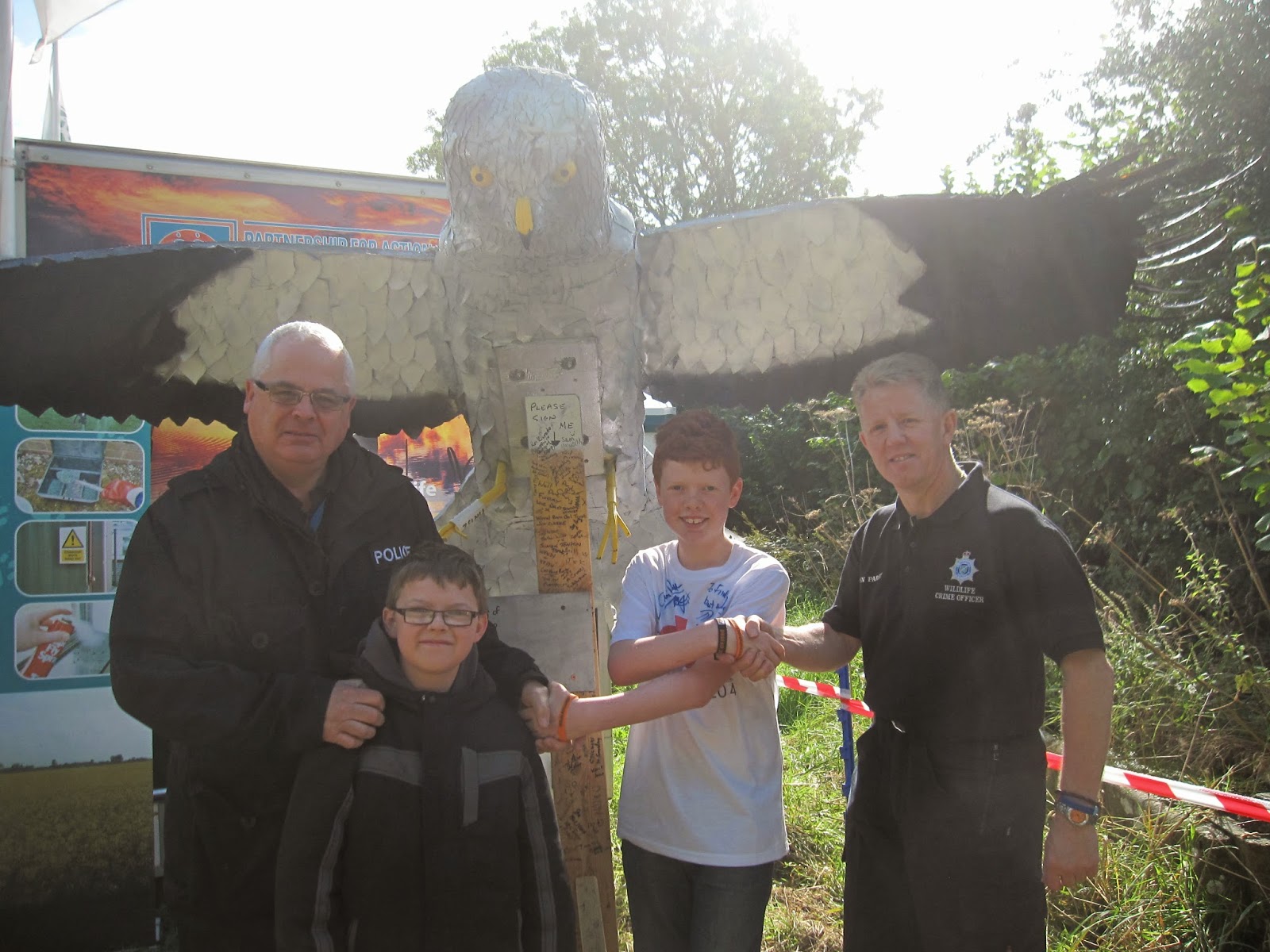 Settling Harry into his home for the weekend

On the Friday we didn't do much except listen to Mark Avery and Tristan Reid's talk which was all about the extinction of the Passenger Pigeon and it's relevance today, and how the Turtle Dove could disappear if we don't take action now (of course no one noticed Mark Avery mentioning his new book)!!  Now the reason we didn't do much on the Friday was  mostly because I was very sick so unfortunately we had to go back to the hotel at about 11:00am,  so I was pretty down and  I missed talks from Andy Clements and Ieuan Evans. I managed a quick hello to Toby Carter before I had to rush away.  I was also really pleased to see Keith and Trevor as well, as they were only there on the Friday. 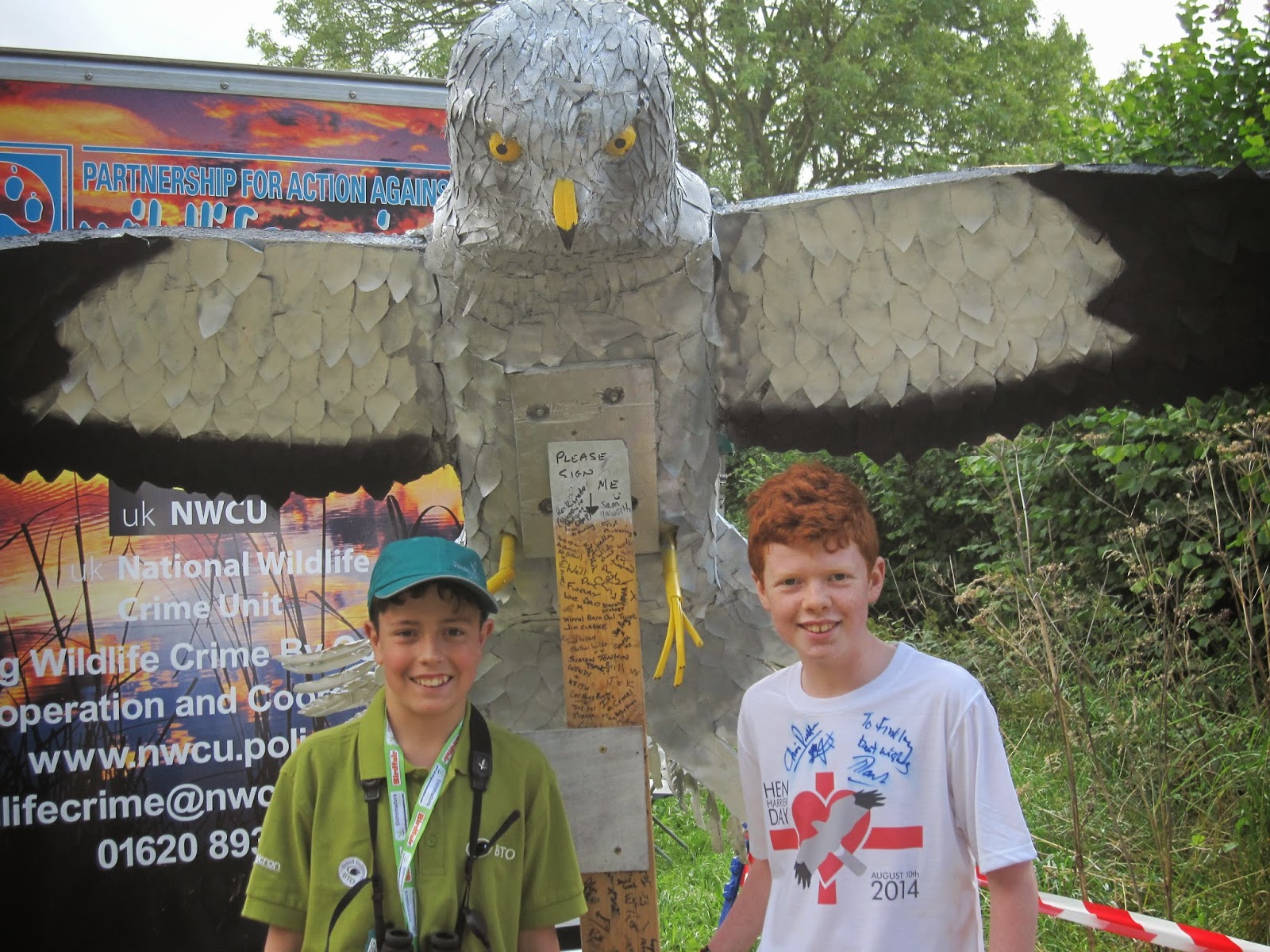 With Toby Carter and Harry

After being sick, I was glad to be back at the bird fair on Saturday,  luckily most of our talks were on the Saturday, but mainly in the morning. This left all afternoon to meet up with people and look around all the wonderful stands.  It was great to see so many more younger people there this year, especially at the Focus on Nature meeting on Saturday afternoon.

However firstly about the talks, we started off watching and listening to Guy Shorrocks. This talk was great and fascinating in a sad, but making you realise properly way. This talk was all to do with Raptor Persecution and the work he does on stopping the illegal killings. It was really interesting and Guy also turned up at the Hen Harrier Protest.

Our second talk was in a building (not part of the tent set up) which was being used this time by Jack Perks. It was his first bird fair and he spoke really well. Jack was talking all about fish and his mission on filming all the freshwater fish in the UK; out of the I think 53 species Jack was on 38, so was doing pretty well.

All these talks I went to have made me really want to talk at the birdfair next year. I would really like to talk about what it means to be a young conservationist and all the ways us youngsters can help to make a positive difference. I will have to try and ask Tim Appleton if this would be possible.

We were going to listen to Mark Avery's and Chris Packham's talk, however by the time we got there the tent was full, however I couldn't help but wait to say hello to Chris (after meeting him at the Hen Harrier Protest) who was pretty inspiring with his "we will win" attitude. At the end of the talk I bought Mark Avery's book "A Message from Martha" on Passenger Pigeons. 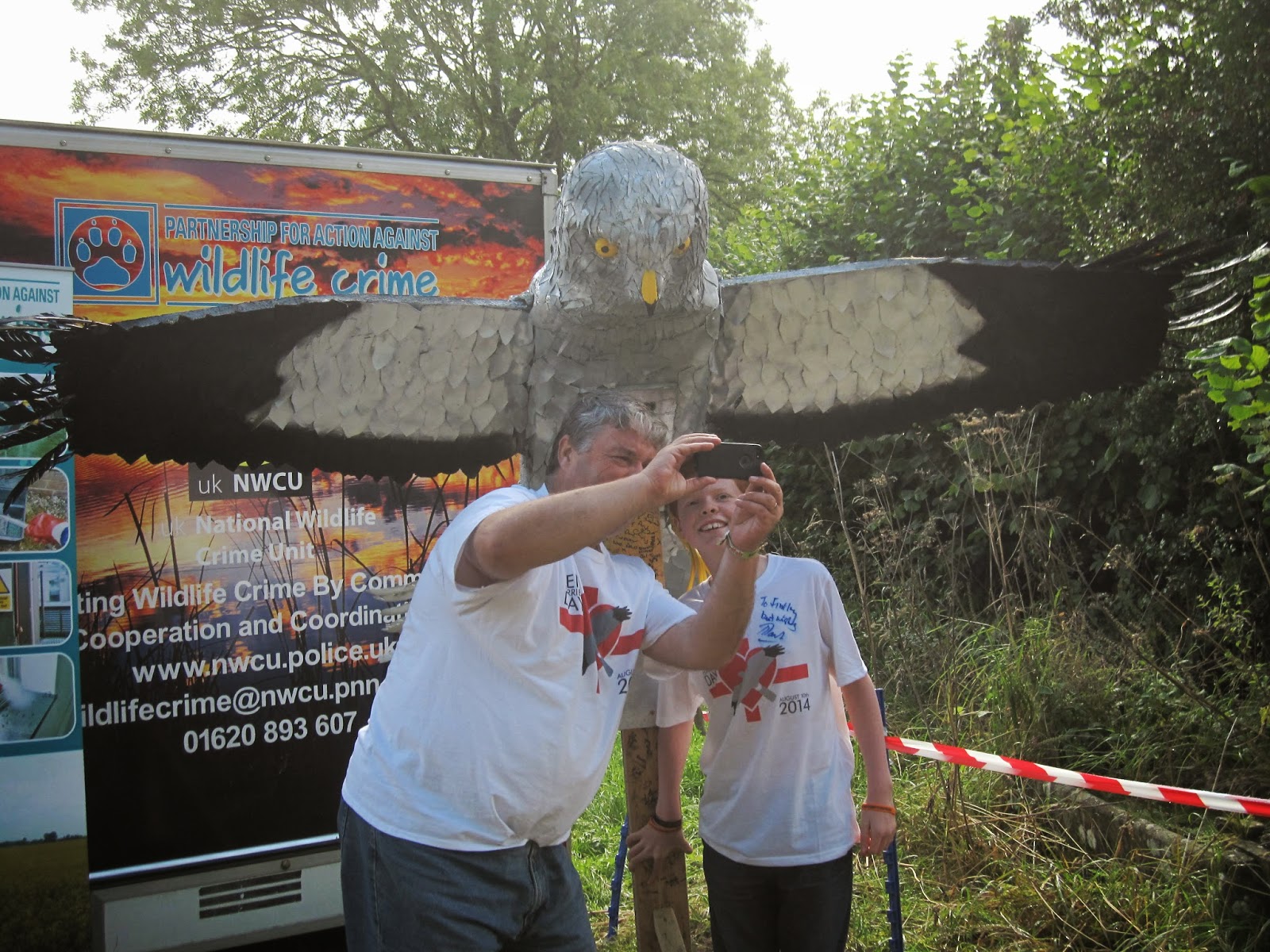 Trying to do a Harry selfie with Mark Avery

It was also lovely to say hello again to Mark and explain to him why I didn't see him on Friday because of course I was sick. That left the rest of the afternoon to have a look around the stand and meet lots of new and familiar faces. I've got to say probably the most frequent collisions were with Jason (Wildlife Gadget Man) off twitter, he's a great man with lots of technical support and knowledge to share, also I met Toby Carter round every corner. Toby is another young birder and I met him the at the A Focus On Nature conference.

Of course, as usual I just had to keep visiting the BTO stand, it was great to see Andy Clements, Nick Morgan, Jez Blackburn, Lee, Carl Barimore (gave me the nest challenge, got seven out of eight which was reasonable) Dawn Balmer, Ieuan Evans and of course Kelvin Jones (also great to see again after ringing Choughs). 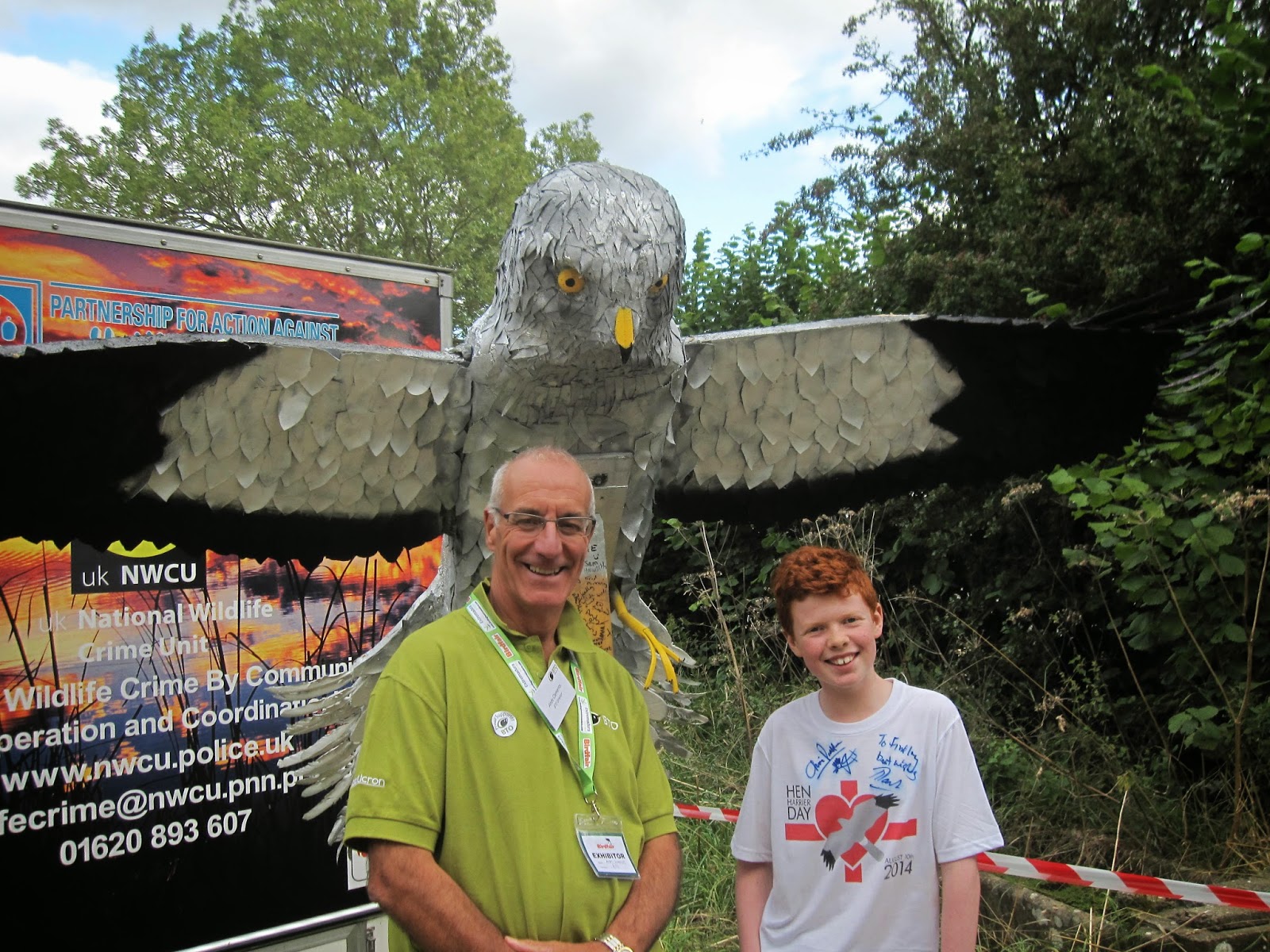 After I'd met everyone and talked for ages, it was time to look around. The first tent we went in we met my Turkish friend from last year, and the year before that, who was lovely. Of course there were lots of holidays  for sale, but I didn't manage to get a free one. I also met some great people on the Hawk & Owl Trust stand and on the Butterfly Conservation stand. It was good to see Dr Robert Sheldon and of course Phil Gatley again as well.

Now I did actually have one more talk left to go to; a talk by Lucy McRoberts on why children should engage with nature and how important nature is in everything we do. Lucy talks really well.

After a tiring day it was time to go back, however before I went to bed I got into a chat with a guy called James who does conservation work and lives in Honduras in Central America. He had some 700 species of butterfly and 700 species of bird all out of his window, it was fascinating; however the most astonishing thing was that in the rain forest he had Barn Owls like we have here.

Also at the hotel we met some of the Hookpod people who have made a specially designed fishing hook which stop Albatross getting drowned, these people were very nice and fascinating to talk to. The final people who were at the hotel were some of the people from the BioTope stand which are a group like the RSPB, but in Norway, they gave me a T-shirt.

After the Saturday it was Sunday (obviously).  It was great with only one talk on Dragonflies that was fascinating. The guy was lovely and would like me to go to the society meeting in London.  After that it was just looking round the stands again and it was great to meet up with Geogia Locock who writes a brilliant blog and recently got some great Otter footage. 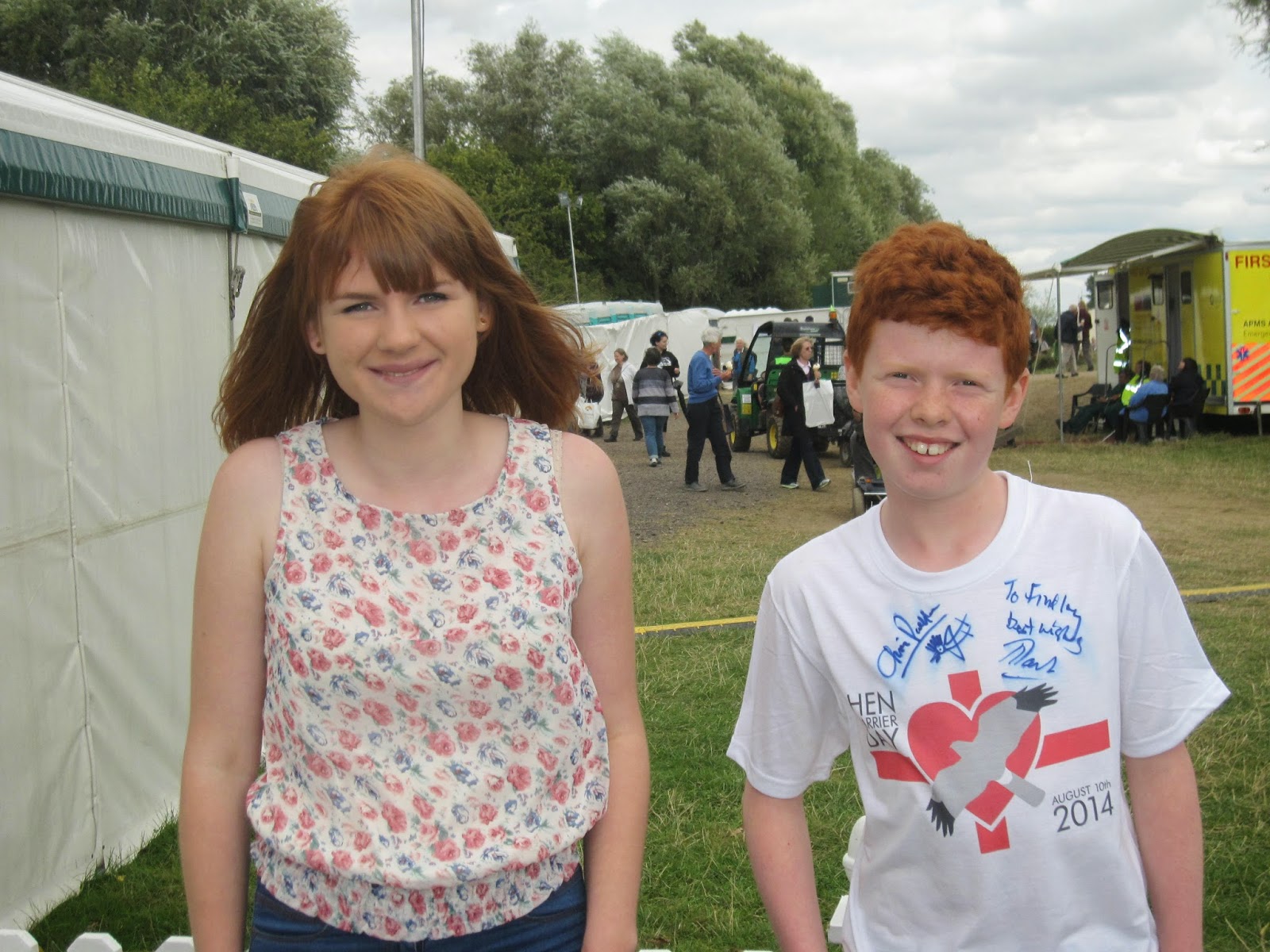 As I mentioned right at the start of this blog post, we were really happy to have Harry the Hen Harrier with us at Birdfair. He stood tall and proud all weekend reminding people just how amazing this species is and what a big gap there would be if we lost them from England forever. I have seen so many Harry selfies on Twitter, the response to him has been amazing. 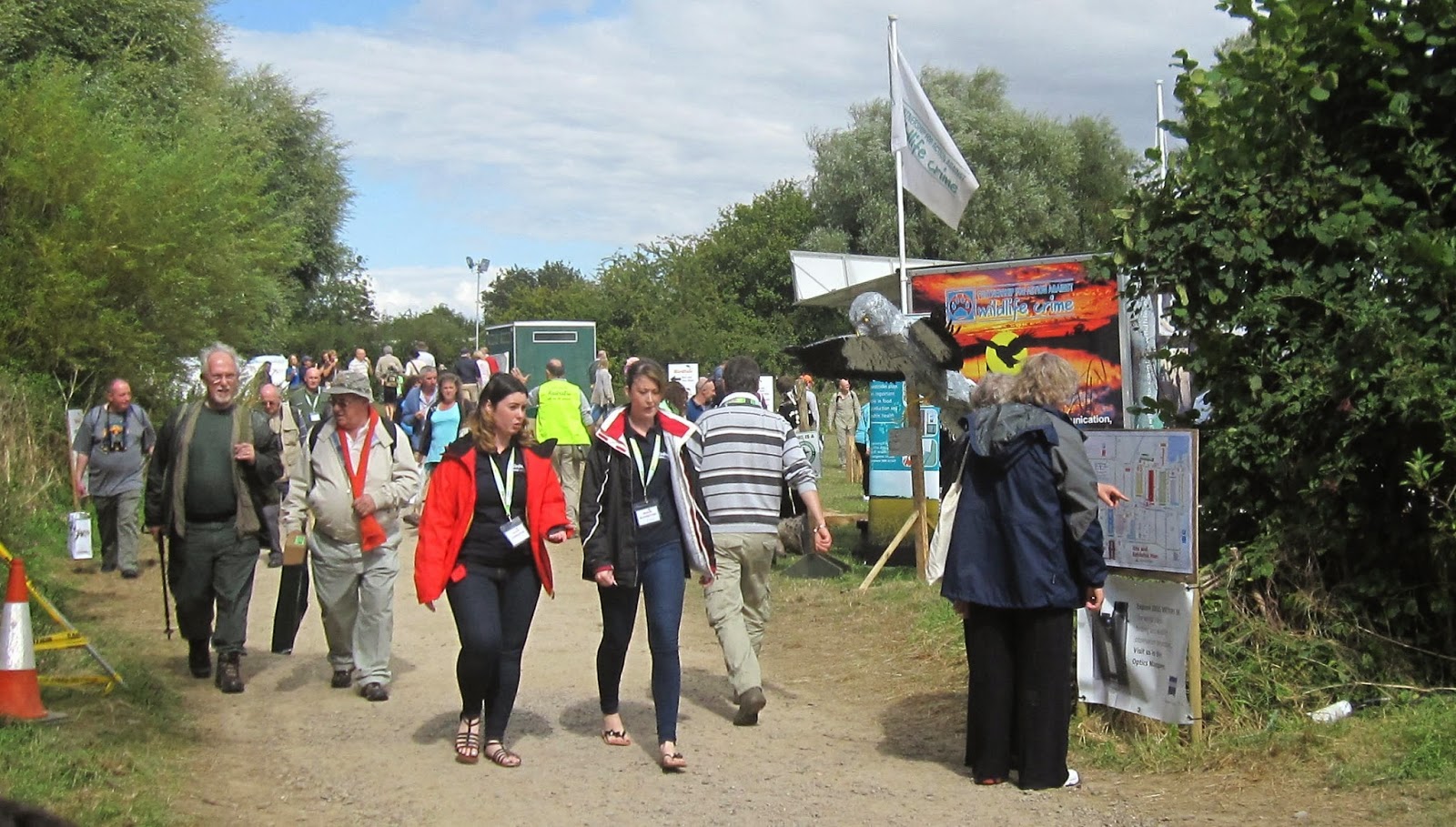 And then it was time to finally say goodbye to Harry, which was actually really hard. We have been on such a journey with him and met so many amazing people through him.  I am really going to miss Harry, but hopefully he will keep spreading the word and raising awareness for our amazing Hen Harriers with the RSPB.

A great birdfair with great people full of great ideas.
Posted by Findlay Wilde at 09:26