Well I Wasn't Expecting That!

Today it was the final Hen Harrier Awareness roost for the Skydancers on the Dee project before they head back to the moors to breed (I hope they all stay safe). However, "just for a change" it was pouring with rain and blowing a gale.  Before the wind came in, the RSPB team (Katy and Jane) managed to get the gazebo up which gave us a bit of shelter, but then the wind came from no-where and nearly took the gazebo across the estuary to North Wales......so we took it back down! 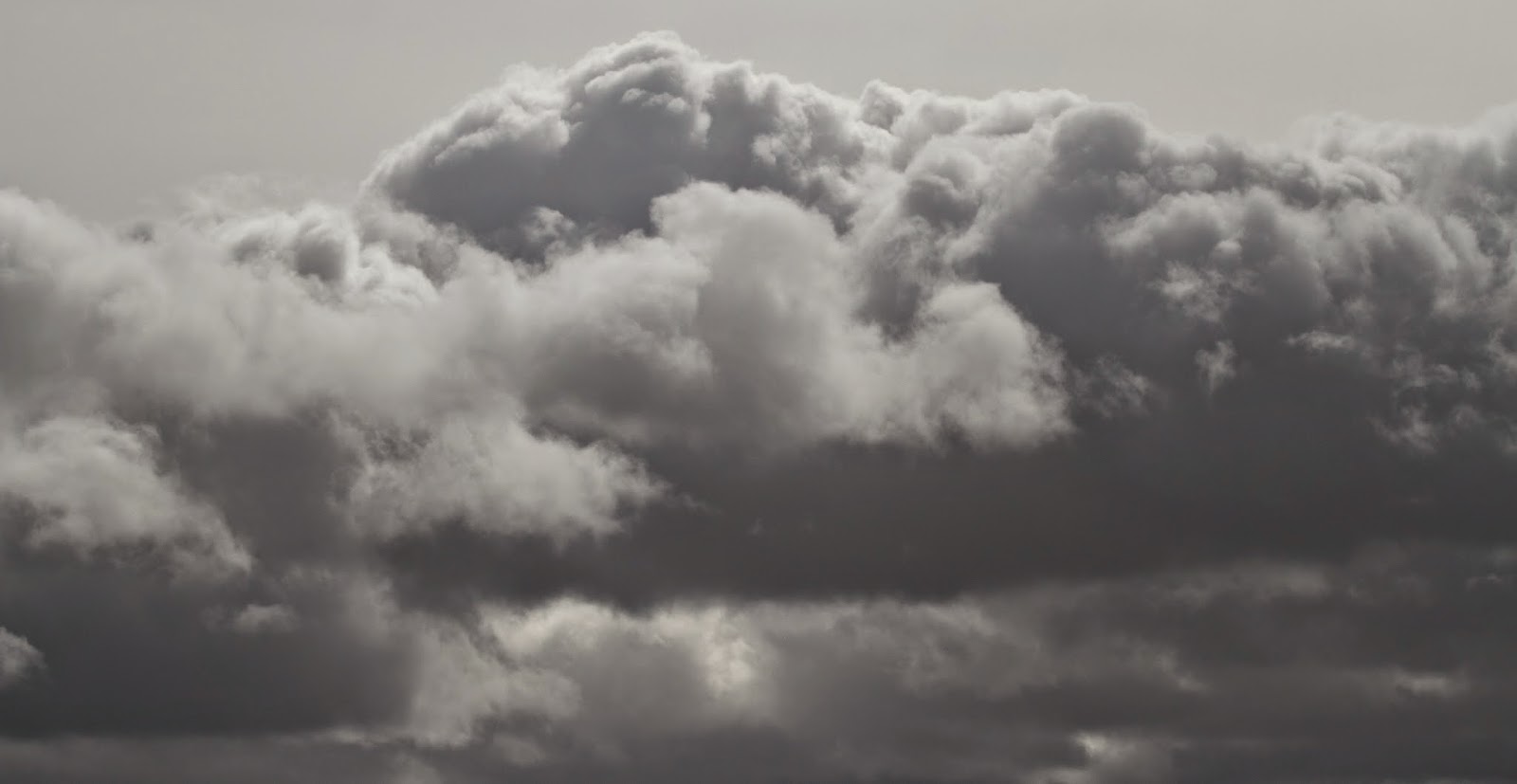 Despite the horrific weather, it was brilliant to catch up with Ellis Lucas and his dad Mark. Ellis and I spoke together at the BTO Conference in December. Before we saw them at Parkgate, they had already been to see the Laughing Gull at New Brighton (which is still showing very well). Anyway, it was great to catch up with them and we had a couple of good conversations about nest recording. Ellis had traveled all the way from Yorkshire and was hoping to see a Hen Harrier, however the conditions weren't too great.

The pool in front of the Donkey Stand was quite quiet, but there we a few Shelduck and some Black Tailed Godwit lurking about. 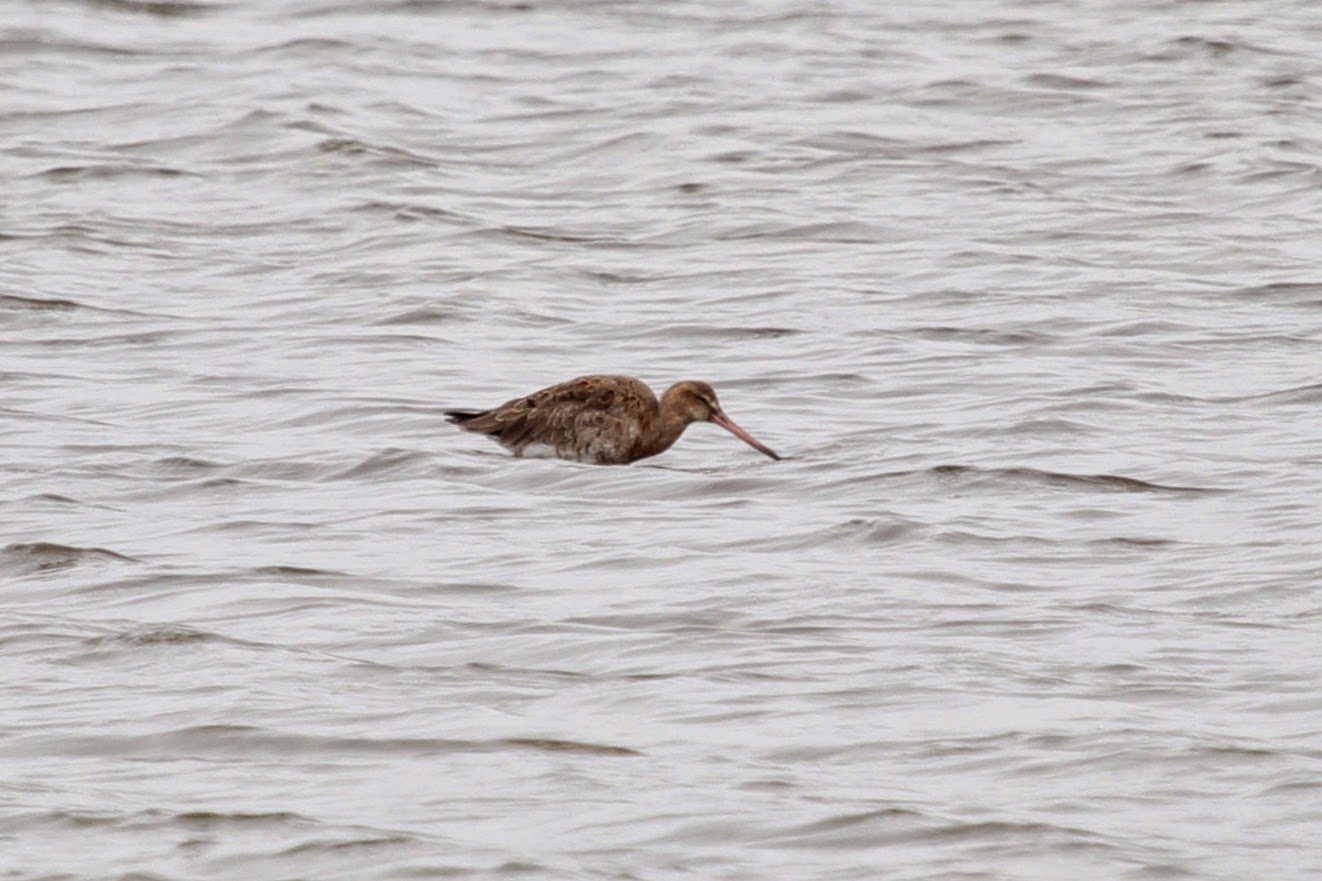 The RSPB ended up having to put everything away because of the wind and rain. As the weather just didn't clear up, me and Ellis decided to make a move as well and go down to the Old Baths end of the Parade.  We all watched for another half hour or so, but then Ellis and his dad needed to go as they had a long drive home. They hadn't seen the Hen Harriers they had come for, but I think they enjoyed the other Wirral birds.  About 10 minutes after Ellis had left, the rain stopped and a stunning female Hen Harrier soared effortlessly across the Marsh.  I felt so bad for Ellis and his dad. 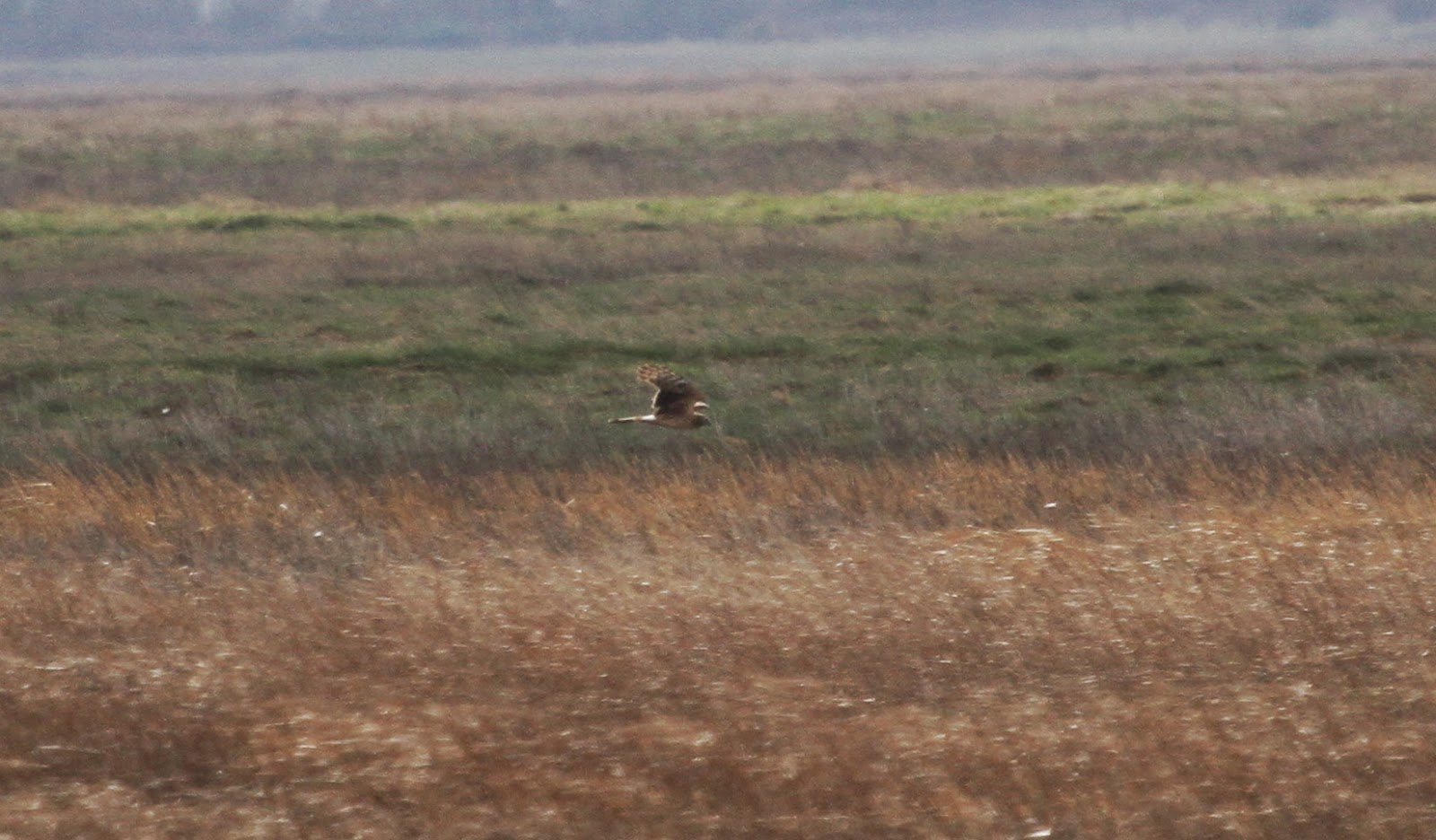 As I mentioned, it was the last Skydancer event for this winter and it is timed this way because the Hen Harriers are due to return to the moors to breed for the summer. The birds from the Dee Estuary will probably be going up and into Wales, and will be departing shortly, so this was probably the last time we will see them on the estuary for a while. 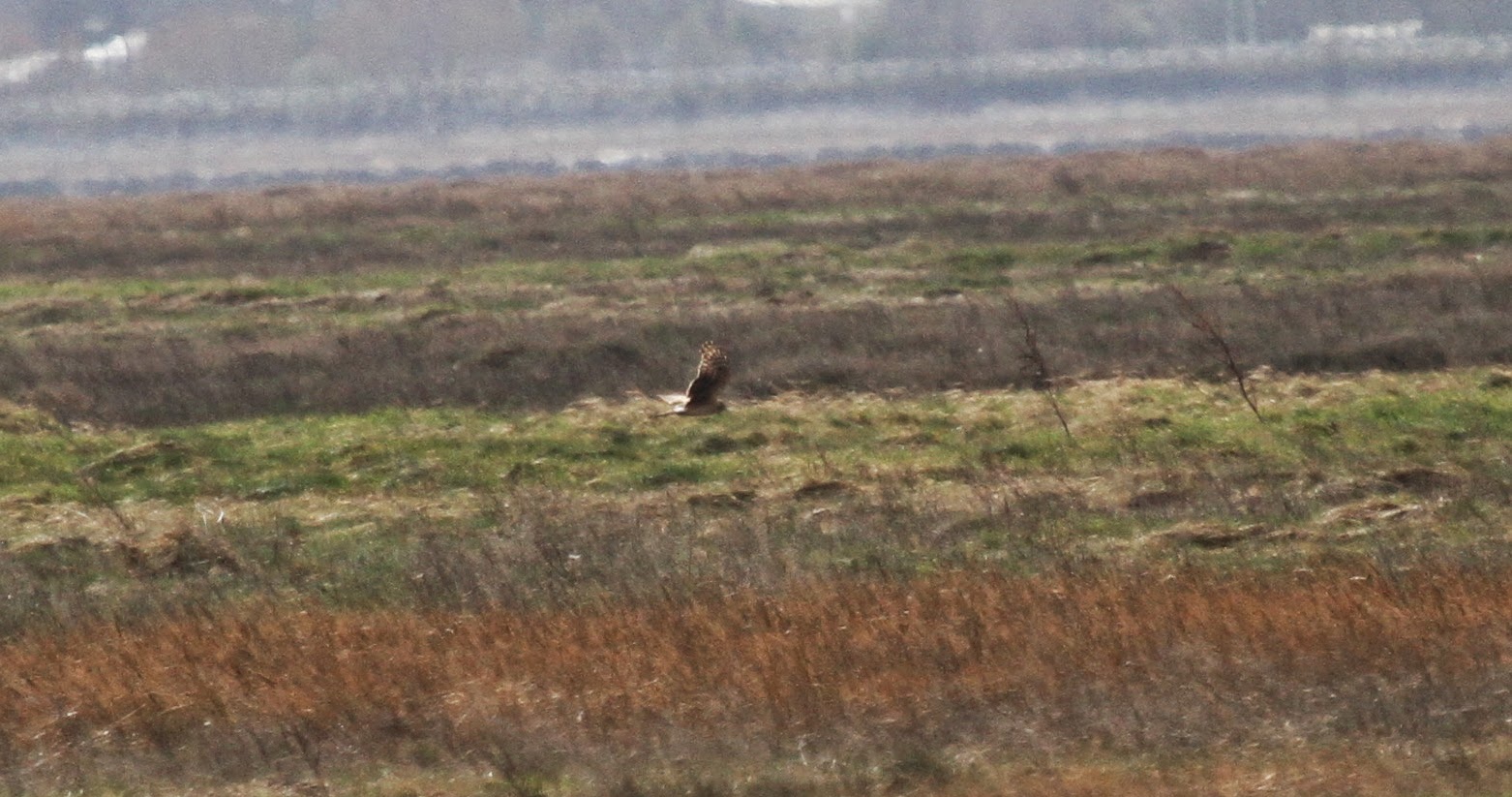 An absolutely brilliant bird to observe and I hope to catch up with them throughout the year in their breeding grounds. 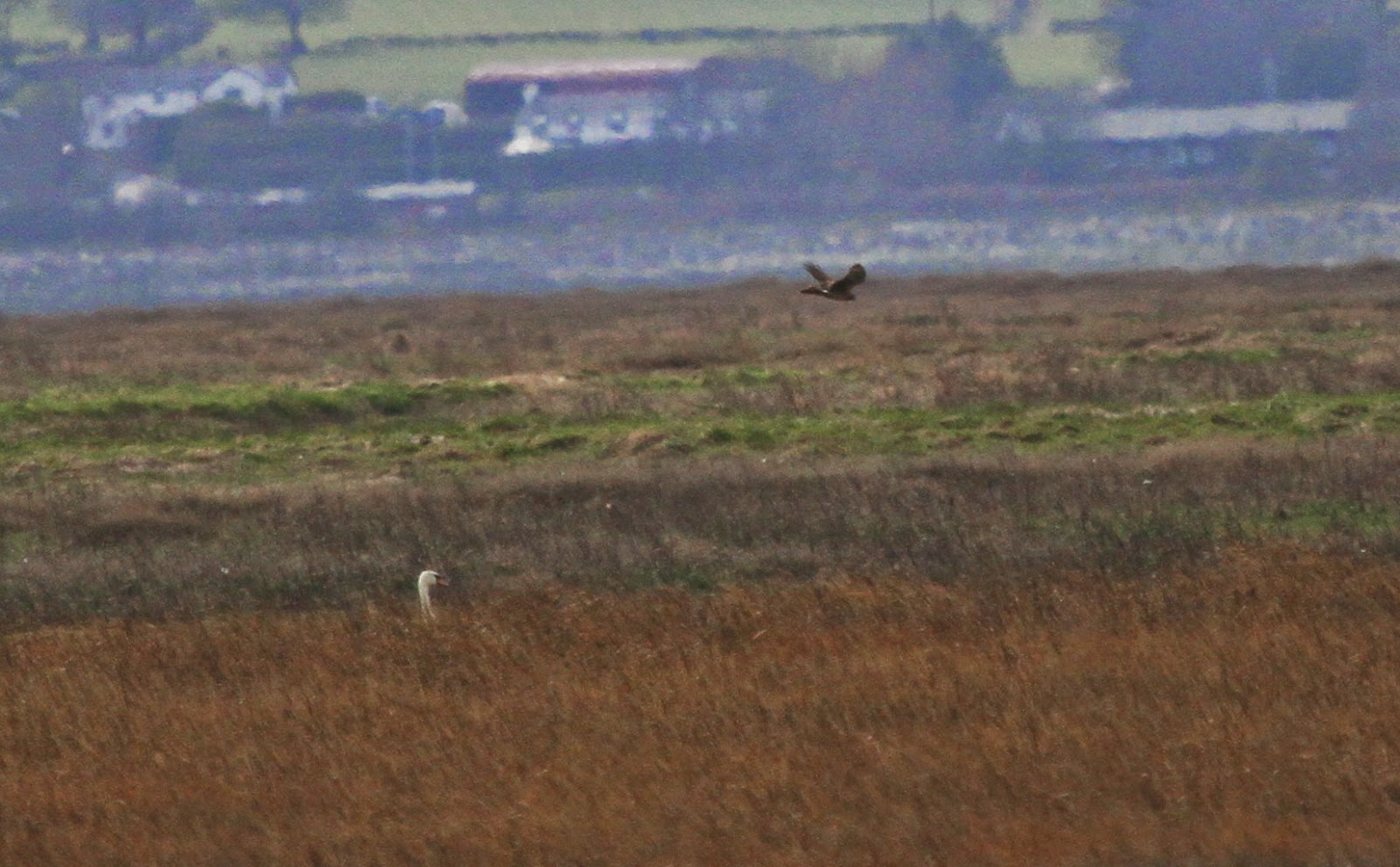 Even the swans were watching it


Since last October when I started volunteering with the RSPB for Hen Harrier awareness, I have never actually seen or witnessed the ghost, the male Hen Harrier on the Dee estuary. So I was stunned to watch a male Hen Harrier flying right across the estuary today, I'm not sure if it has been here all along on a different stretch of the river, or is just passing through towards a breeding destination, however what a brilliant way to end a wet, windy but excitable and interesting day.