Saturdays are just great as its when I get up close to birds and study them. It was an epic day ringing with a new species of bird for me and a new species of bird ringed at the site.  Whilst setting the nets up recently we have seen this bird flitting up and down the fields, however this particular day I had seen several. We caught one of the birds but not in the net we expected, we actually caught it at the larger feeding station in the net ride closest to the entry of the feeding station.

As you may of noticed the bird I am talking about is the splendid Woodcock, an alien like bird that takes an E size ring. 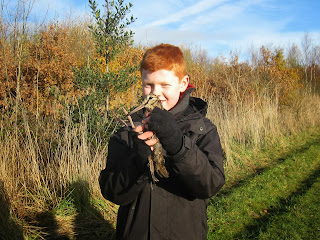 This great photo taken by my dad really shows there beauty and alien like form properly. You would not see this properly at dawn when it is still reasonably dark, so it was great that we got to study it when the sun was out. 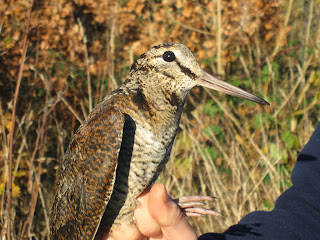 The Woodcock is on the amber list and a conservation concern due to a big decline in recent years.  This species of bird is the only species of wader adapted to breeding in woodland, and I suppose it makes sense with it's perfect camouflage. 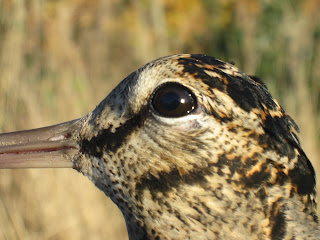 These birds have a great eye sight, in fact they can see all the way behind their head, upwards and the front of their face because their eyes are so high eyes bulge out so much (as I was saying it was alien like). There brain is sort of upside down to make room for the huge eye. Truly amazing creatures. 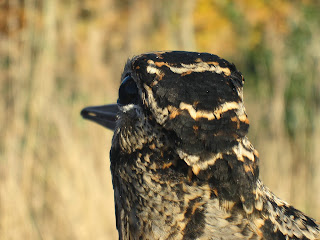 Just look at those head markings and the eye.   Lots of birds ringed again over the weekend with still quite good numbers of Redwing and Fieldfare about. And another Great Spotted Woodpecker, but the highlight for me has to be the Woodcock. 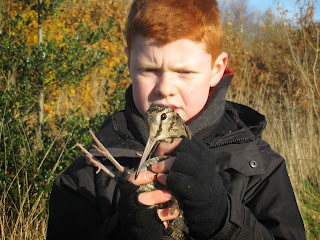 Even the hairy highland cattle looked impressed by the Woodcock! 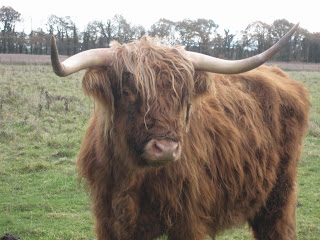 Thanks for reading, and I hope you read my next blog as I have a good quiz question for you on Tuesday and it involves a Woodcock of course.

I was glad to be back ringing after worrying about my Grandma after a rather big operation (she is much better now).  I am sure you will all send her lots of get well soon wishes.

The day started off reasonable taking out about eight to ten birds after the first net rounds; some more Redwings and Fieldfare added to our Autumn numbers with our 100th Redwing of the Autumn being ringed over the weekend.

However, as the day pushed on it slowed down a bit, perhaps as it was a bit warmer, with not as many birds being caught compared to the last few weeks. However,  the second Tree-creeper for the site and a well plumaged female Great Spotted Woodpecker added some additional interest. 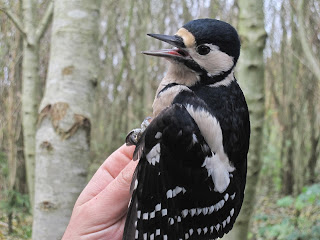 Only me Moxey and Peter were out today which meant I got to do a lot of the ringing and processing of the birds, which gave me a good opportunity to get to know more of the aging of some of the bird species we caught.

I have been getting a lot of birds in the garden lately with a flock of about 100 plus Goldfinch and around 50 plus Greenfinch devouring half of all the sunflower hearts from my three large sunflower heart feeders, I am going through at least a ton a week, well nearly that much anyway!

Of course Goldfinch and Greenfinch aren't new  to the garden; however I have had some new birds coming back for the Winter. A few days ago I was out for a walk at Weaver Park Way and saw a Silver Birch log lying on the floor, I thought it would be great to make it into a fat feeder for my new regularly visiting Great Spotted Woodpecker (currently feeding on nuts), and the Blue Tits and birds like that. They are just starting to get use to it and when I looked out of the window this morning a handsome male Great Spotted Woodpecker was feeding on my new log feeder. I was utterly blown away; the bird wasn't just on my home made feeder it also flew onto my sunflower heart feeder flushing about 30 Goldfinch from it. It was the first time I had seen it on that particular feeder as well. 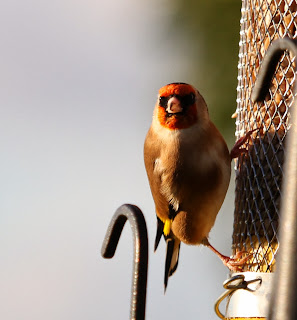 The male Sparrowhawk also made a visit for a snack; sitting on my garden shed feasting away a very unlucky Goldfinch. My other new Winter garden birds include Coal Tit, Reed Bunting, two Wrens (both currently roosting behind my shed) and last but not least Fieldfare. This lovely bird seemed interested in the food laid out on my feeding tray. 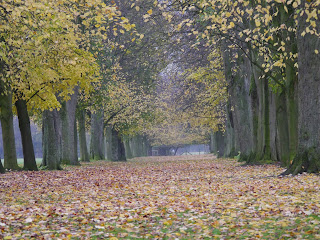 On to today; we went to Marbury Country Park and enjoyed watching all the tit mice on the feeders freshly filled up, which was addictive to watch. I spent ages watch them flitting back and to, joined every now and again by this handsome Nuthatch. 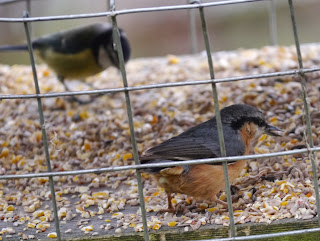 All in all a pretty amazing weekend.

And tonight's quiz is all about music again as you all seemed to enjoy last weeks. But this week's is a bit trickier, so you'll need to go through your CDs and old records again!

Thanks to everyone who had a go, the answers we got are below.

1. Name a band with a large mammal in the title - Noah and the Whale

2. Name a band with a small mammal in the title - Echo and the Bunny Men, Skunk-anaise

3. Name a band with a canine in the title -Bloodhound Gang

4. Name a band with a dinosaur in the title - T Rex

5. Name a band with a marsupial in the title - The Wombats

6. Name a band with a feline in the title - Def Leopard, Pussy Cat Dolls, Atomic Kitten

7. Name a band with a arthropod in the title - The Scorpions

8. Name a band with a legendary creature in the title - The Soup Dragons

9. Name a band with a rodent in the title - Boom Town Rats

10. Name a band with a bird in the title - Eagle Eyed Cherry, Flock of Seagulls, Sheryl Crowe

11. Name a band with a reptile in the title -White Snake

12. Name a band with a fish in the title - Fish (from Marillion), Papa Roach

13. Name a band with a primate in the title - Artic Monkeys, Gorrillaz

14. Name a band with an insect in the title - Bee Gees, Adam and the Ants, Alien Ant Farm, The Beetles


Some brilliant answers from everyone. I like Trevors The Bonzo Dog Doo Dah Band and Douglas getting Roland Rat in!

You've all done well so who wants a Wilde About Birds collectors item wrist band?


Dad's CD collection is epic for wildlife questions! And here is a bird picture to look at while you are thinking about the answers. A Heron from our walk on Sunday that caught an enormous fish. 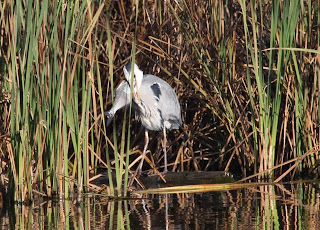 Everyone getting all 14 right will get a prize this week. Good luck. The comments approval thing is on to stop any copying.  I will post the answers from Dad's CDs on Wednesday night.

Good Question 14 - Bird Songs, but not like you're thinking!

Your challenge for tonight is to name 10 songs with a bird in the song title.

Bonus points if there is more than one bird in the title.

The comment thing is turned off to stop you copying each other.

A quick bit of news from the weekend. I went to see Project Wild Thing and watch the waders at New Brighton. I will be doing a blog about his later on, but here's an Oyster Catcher to make this post a bit birdier (if that is a word). 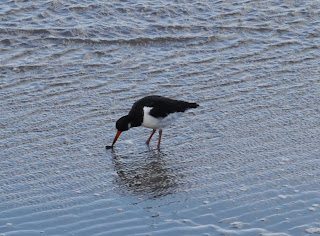 So lets post your answers and see how you did, and the winner has to sing them all and post it on You Tube!
Posted by Findlay Wilde at 18:10 30 comments: