Most Easters I spend my time off in the beautiful locality of Denbighshire that is situated deep in the heart of the North Wales countryside; and much to my delight this Easter was no different. At this time of year birding is at its best with the wooded valleys either side of the house bursting with the recent arrivals of species such as redstart, pied flycatcher and even wood warbler. All of the latter and more can be seen from my Grandma's house doorstep, and yet even more fantastic wildlife sights are just a ten minute drive down the road; bringing you to places like Clocaegnog Forest and Llyn Brenig reservoir.

At the moment revision is one of my major lifestyle factors, which therefore pushes birding and other leisures down the agenda quite a few places; however every opportunity I've had to get out and about during this 2 weeks period, I have grabbed with both hands, resulting in some not bad days out.

As always on arrival not much is done, as the activities are a matter of catching up with my grandparents; however late afternoon I did manage a good hour stroll through the wooded hillside. It was fantastic to hear and see chiffchaff, willow warbler and blackcap flitting to and fro from tree to tree, all of which seemed to be in good numbers for the site. Of course it is important to remember that some of these birds won't yet be on territory, they may simply be passing through the area to their  breeding grounds.

I spent the my first full day in Wales exploring the glorious Isle of Anglesey. The island has a rich and varied coastline, most of which is an area of outstanding natural beauty, making these areas home to an abundance of diverse wildlife. This allows birders and other wildlife enthusiasts a fantastic opportunity to observe some of the most amazing fauna. As can be the case in this location, the wind was strong, but this did not put us off. We started off the visit at a couple of coastal headlands and bays on the run up to RSPB Southstack. I was delighted to come across my first wheatears and white wagtails of the year; both species sheltering from the weather. I didn't bother attempting a sea watch on these exposed bits of coast, but nevertheless, as we left two chough flew overhead chanting their charismatic call and a handful of rock pipit could also be seen collecting nest material.

The coastal fields alongside the road to Southstack held yet more wheatears and choughs (some of which were wearing colour rings; however as I in a moving vehicle and the choughs themselves were half a field away, I failed to get the full ring combination). The wind at Southstack was no better than further down the coast where I had previously been, but I did finally manage to find a sheltered, secluded spot which gave me chance to admire the mass array of seabirds on offer at this stunning RSPB reserve. Guillemots, razorbills, fulmars and kittiwakes were all relatively close in on the cliff faces allowing magnificent scoped views. Puffins had been sighted earlier in the day however after constant attempts to pick these distinct seabirds up, I couldn't seem to do so. As it aways does, time seemed to be escaping quickly so I squeezed in a brief sea watch before moving on to to my last Anglesey destination. To be honest the sea was fairly quiet, none the less a constant stream of gannet and common scoter were worthy of note, with the addition of a solitary red throated diver that steadily flew past heading north.

The final destination of the day was the one and only Cemlyn Bay. This enchanting curved coastal landform is unique with its shingle ridge dividing the open sea from a saline lagoon. The North Wales Wildlife Trust has control of the lagoon which they manage as a nature reserve. In the summer months, the lagoon provides a sanctuary for its famous tern colony which is indeed deemed nationally important as it is home to the only breeding colony of Sandwich Terns in Wales.

As Cemlyn is quite exposed, I decided to take quick look at what the lagoon had to offer. Immediately I was greeted by the exquisite calls of redshank and curlew flying overhead, whilst other individuals traversed the muddy shoreline feeding. On the slow stroll back, I picked up my first 2 swallow of the day heading inland, and then all of a sudden my first Sandwich Tern of the year!! I watched it for 10 minutes as the bird acrobatically swivelled and dived into the foamy sea water for food. Anglesey certainly was an excellent start to my 2 weeks in Wales, and it just kept getting better!

On the long drive back we took the route back over the moorlands due to terrible traffic on the A55.  And what a choice this was; as we steadily made progress through the unique landscape, a bird of prey caught my eye, rotating my head and having the bird in full view, I came to realise that it was in fact a ring tail hen harrier!!  Well, I am sure you know how I felt about that.

Day 2 of Wales brought me to the remarkable birding destination of the Great Orme. This fantastic coastal lump of rock is an avian migrant hotspot.  In the peak migration zones of Spring and Autumn species such as meadow pipit can be seen in their thousands overhead, whilst scarcer species such as dotteral, lapland bunting and black redstart are annually seen. However that day wasn't all about birding, as compromises have to be made to entertain the younger one; therefore the majority of my time up the Great Orme was actually spent under it. I visited the famous Great Orme Copper Mine, where it was fantastic to learn about the old geology of the rocks here and how the copper was extracted. Of course I did manage to fit in a short walk across the headland where it was good to see choughs in almost every field (this time succeeding to observe the colour ring combinations), there was also a constant stream of meadow pipits overhead, with a couple of wheatear thrown into the mix for good measure (one bird which appears to come in off the sea). 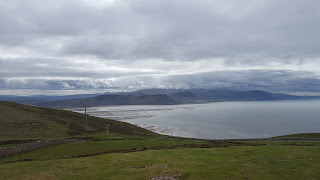 Beautiful view from the Great Orme 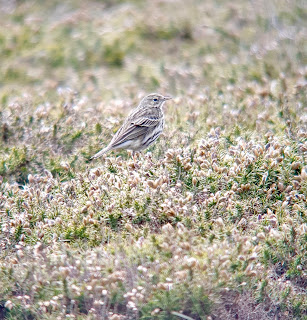 My Llandudno highlight came at the end though whilst sea watching.  A large falcon zipped through my scope view, followed by a square winged corvid.... I immediately got my bins on these 2 species and soon came to realise that a Peregrine Falcon was in fact being mobbed by a Chough!!! "Absolute Scenes" I yelled. Despite the experience lasting only a matter of seconds, it was certainly a highlight of my Welsh birding this Easter. Just before we left my first house martin of the year flew overhead.

The following day I visited what I think is one of the most scenic Welsh forest locations there is, or what I know of anyway; the one and only Bod Petryal. This walkway is part of an extensive forest biome made up of primarily coniferous woodland often with a deciduous outer edge. The forest as a whole is more commonly known as Clocaegnog, and known to many birders for the unique and difficult to find diversity the forest holds. In terms of birds, multiple great grey shrikes spend the Winter in tucked away deforested clearings, whilst crossbills are almost guaranteed to be seen. One of the forests speciality has to be the goshawk. This rather secretive species is difficult to catch up with in Clocaegnog due to the forest covering such a large area with not many public access spaces. Nevertheless on occasions you can see them gliding above the forest canopy, or glimpses of them skilfully zipping through the network of tree trunks.

As per usual, my visit to Bod Petryal proved fantastic, as soon as I arrived on site, I could instantly hear the chatter of crossbills, which are surprisingly rather camouflage amongst the tree tops. Goldcrests were out in force, with their jingling song seemingly coming from every other tree, whilst their wasn't one part of the walkway where you couldn't find siskins. My target species came mid walk though, when I came across a large female goshawk circling relatively high over the pine forest. It gave brief views before rocketing back into the concealment of trees. What a bird!!!!! The day ended with an obliging flyover from a red kite and 3 passing lesser redpoll. 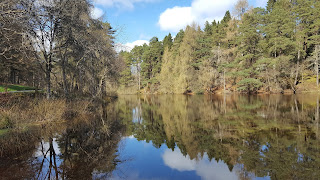 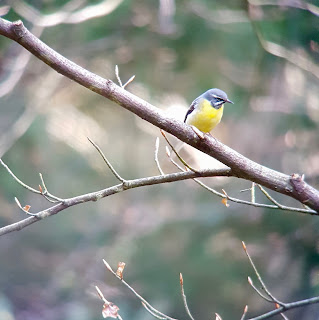 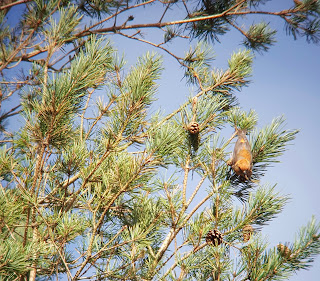 One of up to 50 Crossbills present

The final part to a fantastic first week in Wales brings us to the upper course of the River Clwyd. The 2 words upper course can probably give those of you reading a good clue that the species I was after today was indeed the one and only dipper. Parking up in a pull in space adjacent to the river, I began to retrace the cars 'steps' back up the Clwyd. Within minutes out of the corner of my eye I noticed a brown blob whiz past my focal view, soon coming to realise this was indeed the bird I was after. It was fantastic to watch its typical bobbing action behaviour at a relatively close range, however what came next was even more incredible. After 5 minutes of the dipper hopping from rock to rock feeding, I observed it starting to collect mosses from the river bank! This particular bird was gathering nesting material, which for the time of year could have been seen as rather late. I enjoyed watching the bird retreating back and forth from its nest site for at least another half an hour from a safe distance (therefore not disturbing the bird). A fantastic end to a fantastic first week! 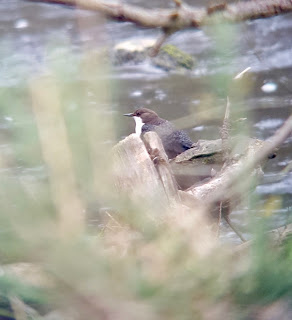 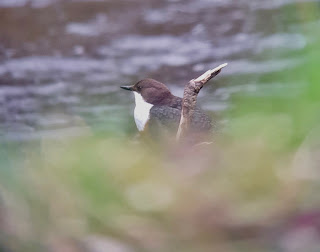 I should also mention that whilst I wasn't birding or revising, I spent my time participating in the BTO Nest Record Scheme (NRS for short) as I do every year. The aim of this ongoing project is to discover more and more information about species' nesting profiles from the start of the season until the end. Due to my Grandmas house being located high up in the Welsh hills, it is generally on average colder than lowland areas, therefore the breeding birds do tend to start their season a little later. None the less, I managed to find a surprising amount of nests of the expected species. The bulk of the nests found were indeed thrushes (an even ratio of blackbird and song thrush, 5 of the former and 5 of the latter); however 3 long tailed tit nests were also found during the course of the week. I was particularly surprised and pleased to find 5 song thrush nests as genuinely speaking, they are quite a difficult bird to catch up with around where my Grandma is based. 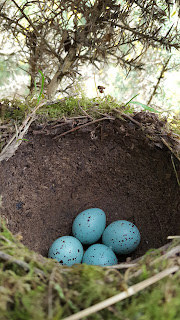 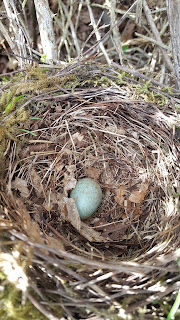 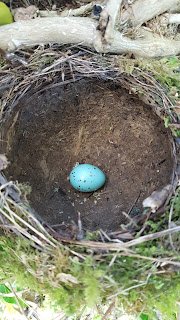 A brilliant start to my Easter break.