The so called Glorious 12th (August) sees the start of grouse shooting season in the uplands.

You may hear lots of stories about how the uplands are managed and all the benefits that come with that for some breeding birds like Curlew for example; but there is of course a darker side to all this in the form of raptor persecution.  Grouse moors are intensively managed to produce unnaturally large numbers of Red Grouse, many of which will then be shot.  But anything that would naturally prey on the Red Grouse is not welcome on the shooting estates and it is worrying to see a lack of natural predators in these areas.

Don't let my opinion sway you though, take a look through some of these links and decide for yourself.

The mystery of the missing hen harriers
https://www.theguardian.com/environment/2015/jan/13/-sp-mystery-of-the-missing-hen-harriers

Another shot hen harrier... how many more?
http://www.rspb.org.uk/community/ourwork/skydancer/b/skydancer/archive/2017/05/16/another-shot-hen-harrier-how-many-more.aspx


Something I am learning is that where there is big money to be made there can also be criminal activity. Wildlife crime is not something you hear about enough in the news, as the environment and natural world are so far down the list of priorities in government, business, education etc.

The evidence just keeps getting clearer and clearer that serious wildlife crime is taking place in the uplands.  Modern day technology is helping to bring these activities to light more and more.

Just one more statistic for you. In theory, the uplands in England could support over 300 pairs of hen harriers. Last year we just had just 4 breeding pairs.  Only about 1% of what could be there. Not really a statistic to be pushed down the priority list. And this year's number of breeding hen harriers in England is not looking promising either. But even if the numbers doubled to 8 pairs, it still wouldn't be acceptable.

So as the social media posts about the so called Glorious 12th start flooding in, wouldn't it be great to see #Inglorious12th trending and raising much needed awareness about the criminal activity that continues to plague these important breeding grounds.

All comments are welcome, whether you agree or disagree. It's always good to hear a wide range of opinions and ideas to move things forward.

Please sign up to the #Inglorious12th Thunderclap by clicking here and help raise awareness.

Last year 482 people signed up to a similar thunderclap and we created a social reach of over 1.3 million people. It would be great to reach even more people this year. 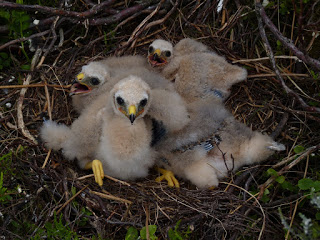 This blog was only posted weeks ago, and yet the illegal raptor persecution continues. Including this one:

Since this blogpost was first published, the RSPB Skydancer team have published this year's hen harrier breeding numbers.

Only 3 pairs of hen harrier have successfully bred in England this year
https://www.rspb.org.uk/community/ourwork/skydancer/b/skydancer/archive/2017/08/01/hen-harrier-breeding-numbers-in-england-2017.aspx