I must say a massive thank you to the following people for the time and effort they put in to writing their honest, emotional, funny and heartfelt guest blogs on what their relationships with nature were like when they were 13:

If' you've not read them all, I would strongly recommend that you do. They are brilliant.

There were a lot of themes that came out of this guest blog series and I have written a blog about all these themes. It is appearing as a guest blog for Mark Avery today, and you can read it here.

It has been an amazing series of blogs and thank you again to all those involved.
Posted by Findlay Wilde at 07:35 5 comments:

Parkgate - Speaking up for Hen Harriers

Last month was the first "Skydancer on the Dee" event of the Autumn/Winter. It is an RSPB project where we set up a stand/marquee at Parkgate (on the Wirral), looking out over the marshes of the Dee Estuary, and talk to people about the serious issues facing Hen Harriers; raising awareness about their illegal persecution.

Now the main reason we have the event at Parkgate is because Hen Harriers annually winter on the estuary and are seen regularly from Parkgate promenade. So it's a great place for the public to see them, and it is a safe place for the Hen Harriers, as that area of the marsh is managed by the RSPB. 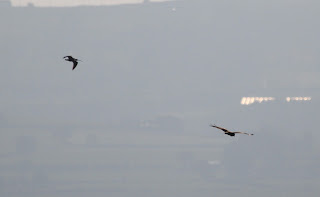 So yesterday was the second event of this season, and I was delighted to be there supporting RSPB Burton Mere's Dan Trotman, who does most of the Skydancer on the Dee work. I was volunteering along with Elliot Montieth; a young birder from the Wirral and a really amazing photographer.  Although I have spoken to him a lot on Twitter, it was the first time I'd met him. We had so much to talk about.

I also got a surprise visit from Bill Morton, THE birder on Frodsham Marsh. It was great to meet up with him and Sparky.  It was also great to catch up with Phil Gatley who volunteers at RSPB Conwy and has a head full of great knowledge.  It was also good to catch up with Gail and her son and seeing them at Hen Harrier Day earlier this year.  It was great showing her son all the birds of the marsh through the scopes. 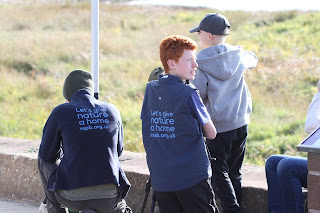 The weather was actually nice for once, however it did make it quite hazy over the marshland which meant spotting birds was quite difficult.  Unfortunately there hadn't been a Hen Harrier spotted for a while on the Dee, which is a bit concerning, but I heard from Alan Davies that they spotted one at the same place today.

As it was a nice day, there were lots of people walking along the promenade, and it was good to see a lot of people taking interest in our stand and the work being done. I was encouraged by lots of  positive engagements, and a couple of new members for the RSPB. 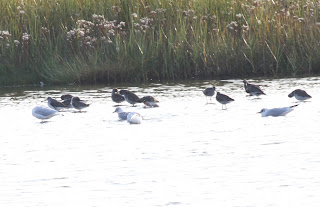 The birding highlights of the day were 3 Marsh Harriers, 7 Greenshank and a Great White Egret. But just looking out over that salt marsh as the sun starts to set is an experience not to be missed. 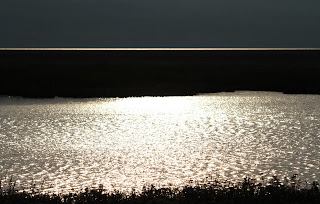 By the way, if anybody decides to visit Parkgate, the chippy has been refurbished and a batch of chips is all you need after a good days birding/volunteering!

A great event and I can't wait for the next one in a few weeks time.