During the course of this half term school holiday, I have thoroughly surveyed the habitats at my Grandparents and the various species they hold; from ancient oak woodland to open pasture, every area has thrown up pleasant surprises and sparked ideas for future conservation projects. 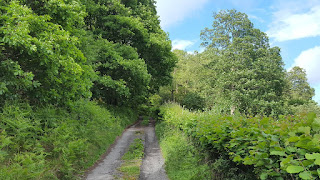 I arrived at my Grandparents on the Tuesday and spent the majority of the afternoon covering the woodland sector. Over the past few years my Grandparents have been working hard to develop the habitat for many ancient oak woodland specialist species; and this year the work has noticeably payed off.

The sheer variety and density of some species this year has really astounded me; Wood Warbler, Redstart and Pied Flycatcher are all present and breeding within this woodland site. The former two species seem to be in good numbers, with at least three singing male Wood Warbler.  On the surface this may not seem that impressive, but some areas across Wales have in recent years lost breeding Wood Warblers altogether, so it is encouraging to have seen as many as three pairs at this site.

I have also observed at least seven different male Redstarts in various territories across the woodland, many of which being accompanied by the female, again showing a breeding population. All the Redstart pairs this year have decided to nest in natural sites (I only noted four in the previous year) and not in any of the nest boxes put up around the wood.

The most impressive figure for this woodland site though is indeed this year's Pied Flycatcher population. 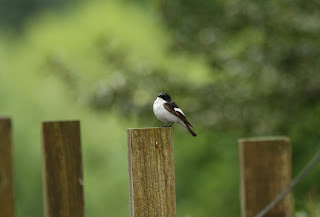 During the Winter months my grandparents erected seven nest boxes in the woodland within a relatively close proximity to one another. At the time, I thought getting 1 pair to take up residence in one of the new boxes was a bit of a dream; however when I came to check the boxes over the course of the school holiday, I was chuffed to bits to discover five active Pied Flycatcher nests. However the excitement doesn't stop there, as after a thorough stroll through the woodland I found there to be well into double figures of Pied Flycatcher pairs ... and possibly more. 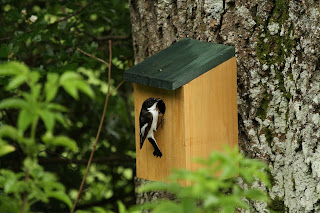 Based on only six observed pairs last year, this is indeed a remarkable increase.  Due to this success, this Winter much of my time will be spent designing and building numerous nest boxes to be put up at this site to enable me to monitor this species in more detail and possibly increase the number of pairs present during the breeding season. 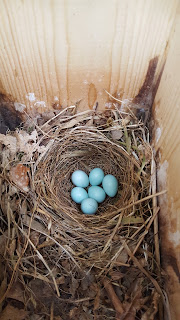 Last year I was delighted to witness a Garden Warbler spending time for a couple of days feeding alongside the margin of woodland and pasture. This was my first and only sighting of a Garden Warbler at this site in 5 years and I couldn't quite believe it. This year however a similar sort of habitat does indeed hold at least 5 pairs of Garden Warbler, yet again an increase, but not just an increase in numbers, it is now a recognised breeding species for the site! I also succeeded in finding one of the nests located in a dense bramble patch. 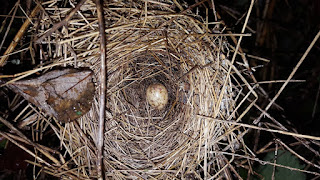 Whilst spending time in the woodland I did on one occasion hear and see a solitary Marsh Tit.  This species makes regular visits to the feeders in Winter; however this holiday was the first time I had witnessed one in the breeding season. I suspect that this species could well also be breeding.

As you can tell from what you have just read, I have good reason to be excited about this area of land  now and for future seasons.  I mentioned before, it has brilliant potential for future projects that could extract valuable data for a variety of species, some of which are not currently monitored in detail. The work put in to the site is really paying off.  I can certainly report a successful breeding season at this particular site so far!