A few weeks ago I was amazed and excited to be nominated for the Animal Hero Awards 2014 in the category Young Animal Enthusiast. 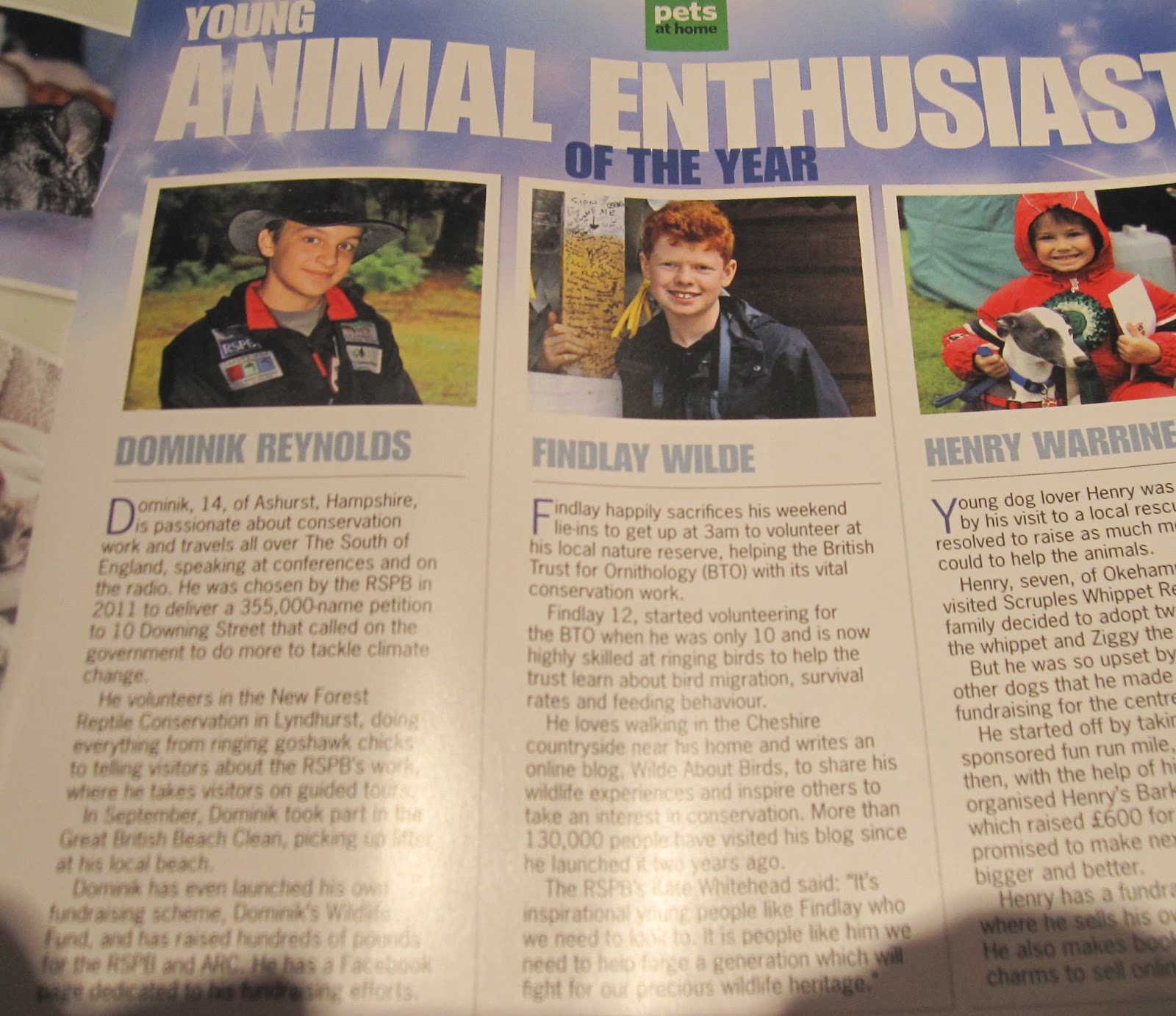 Now I'm sure many of you will have been to London before, however I have never been, so that made the journey to London for the awards even more exciting. We traveled down by train yesterday through lots of misty murk, but that didn't stop me seeing a massive flock of Fieldfare flitting across the fields. I also spotted a great looking wetland area just a bit north of Stafford. I need to find out where it is because there were a few hides on the site. Maybe one of you knows where this might be.

We arrived in London in plenty of time and enjoyed a taxi ride to the hotel. That London really is a big place, but our hotel was next to Hyde Park so I could still see lots of green and trees.

And then it was time to get ready for the big event. I couldn't just slip any old clothes on for the event, instead I was wearing a suit, a "lifer" for me. 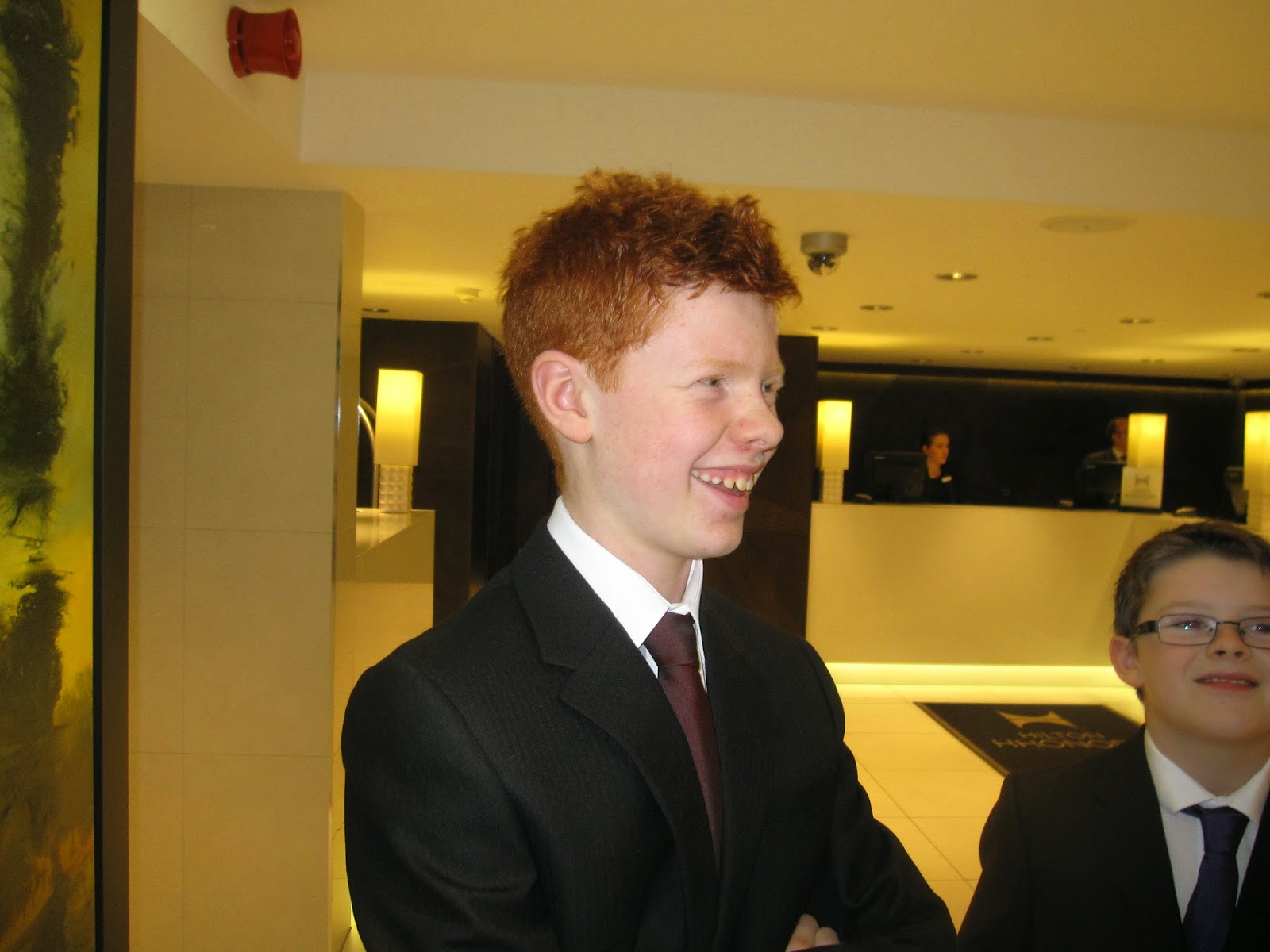 The awards were held at the Marriott Grosvenor House Hotel which is probably the poshest place I have ever been in. When we arrived there were police horses, people from the forces, stars, dogs and all sorts standing round a big red carpet.

When we got in there was a champagne reception which was great for mum and dad, but Harley and I had an orange juice reception.  I must mention a lovely couple called Mr & Mrs Boddie who we got talking to and who were very supportive.

It was suddenly time to go in to the ballroom for dinner. The room was huge and shining a kingfisher blue colour. 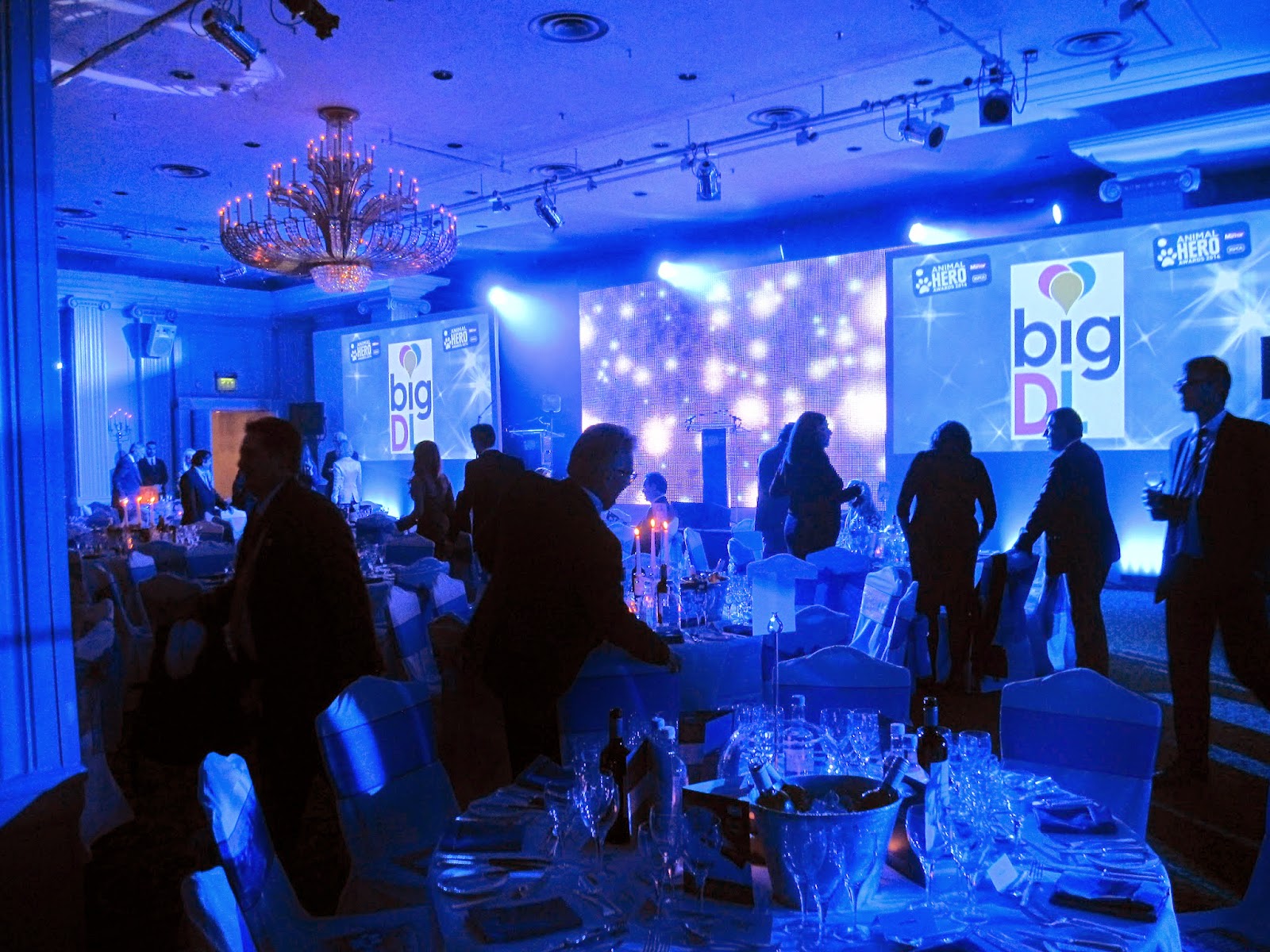 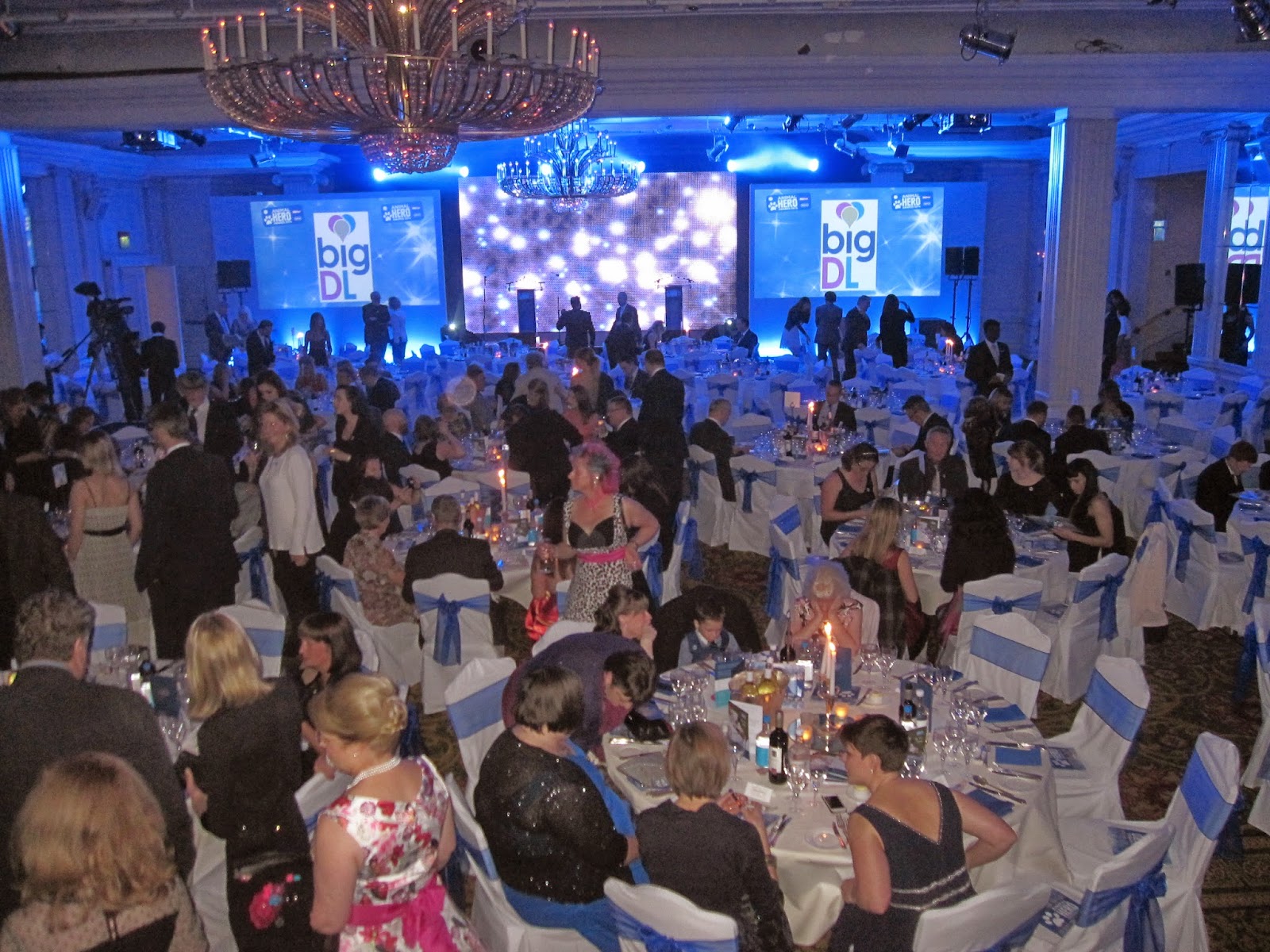 Before the awards started, Harley decided to go and talk to Brian May about electric guitars. I went to join them and had a great conversation about badgers and Hen Harriers. I even ringed Brian with one of my WildeAboutBirds wrist bands! 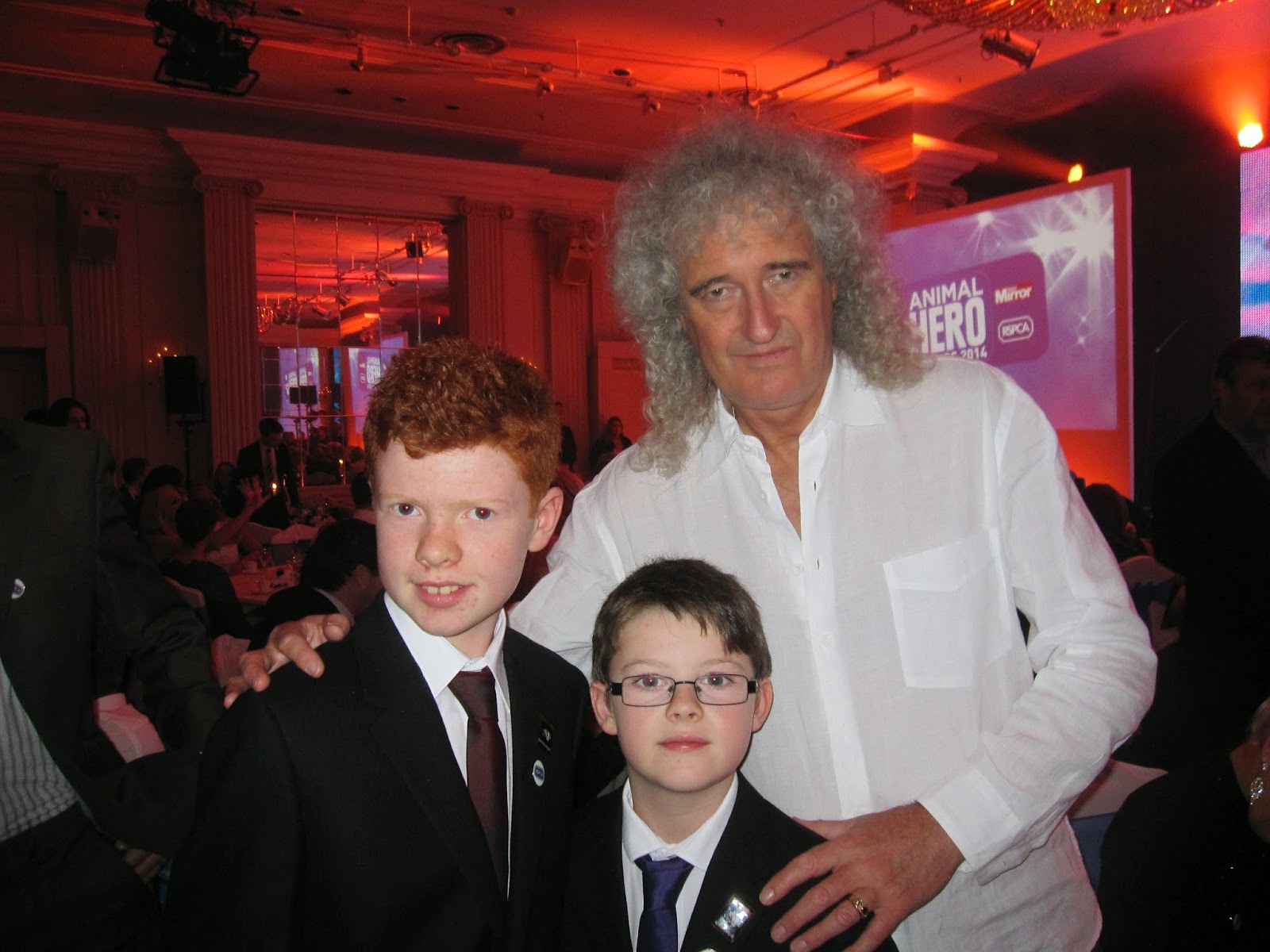 After tea it was time for the main event and just enough time to check that there was no tomato soup on my shirt! I didn't know who else had been nominated in my group until we arrived at the event, but it was great to hear about them when Amanda Holden read out the information about why we had all been nominated. Eager anticipation was  building inside me, and of course even if I didn't win, it still felt great to be recognised alongside some amazing animal heros.

And do you know what, I honestly didn't feel at all disappointed, I just felt really happy for Dominik, especially after hearing everything he has done. I also thought, I really need to meet him, so I went to find him after all the awards were announced to say well done. 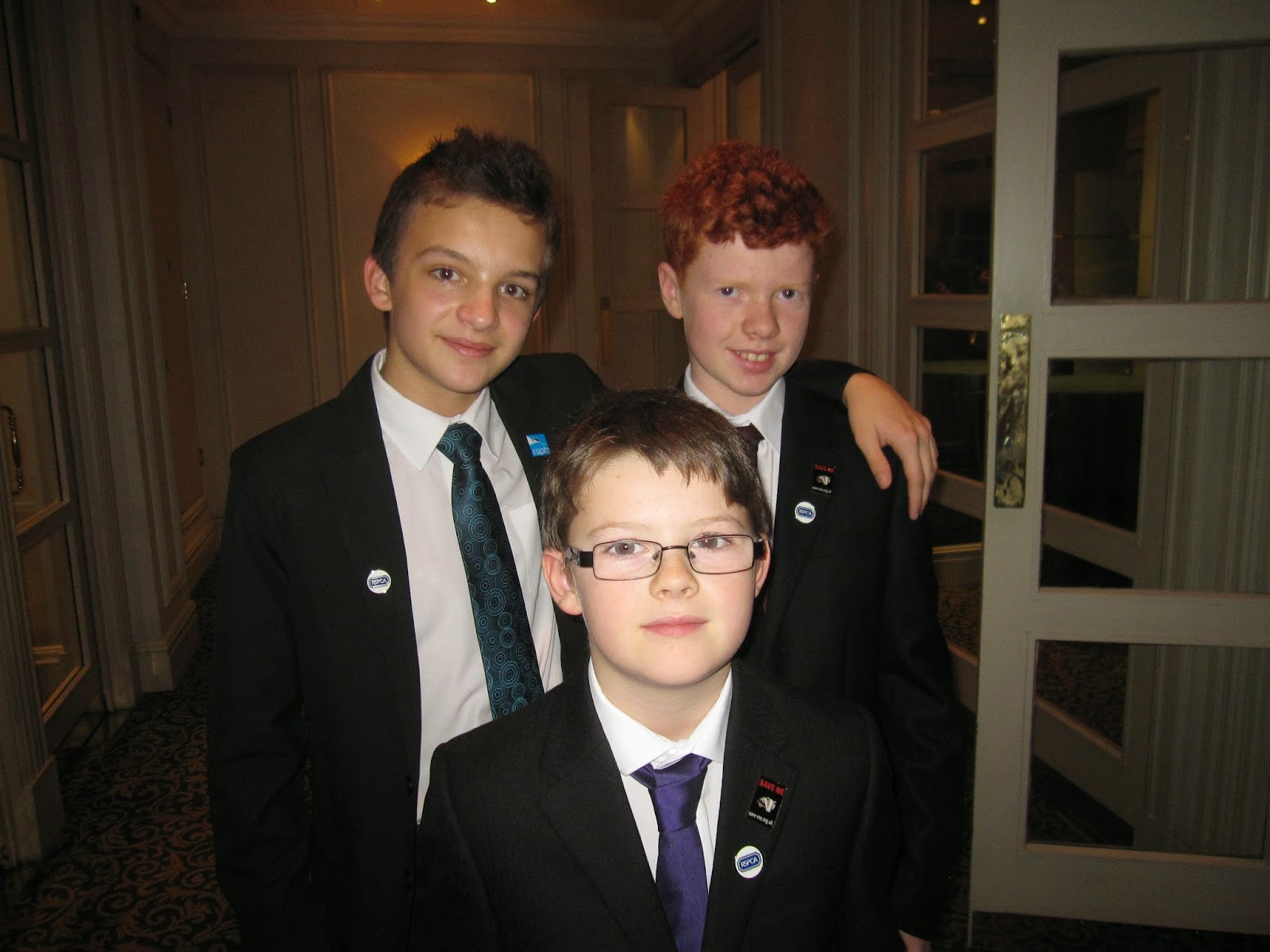 On the way back we found out Dominik was staying at the same hotel as us, so when we all came back in from the coach we all had a drink together and talked about all our wildlife goings on. We swapped emails and stuff and it's great to have found another young wildlife enthusiast to talk to.

The morning after that brilliant evening, we all decided we needed to see more of London, so we decided to take a ride on the open top bus tour ride. Now I've got to be honest it was freezing up there, but we managed to see some beautiful landmarks. I did keep thinking though, how are we ever going to change things with all these people rushing around and chasing things that wont make them really properly happy.

But back to landmarks, such a variety including The Shard, The Gerkin, Big Ben, Westminster Abbey, St Paul's Cathedral, Tower Bridge, Trafalgar Square (with a big blue chicken in the middle), Marble Arch, Buckingham Palace, Houses of Parliament (no Elizabeth Truss sighted, no doubt hiding away preparing to cull something). 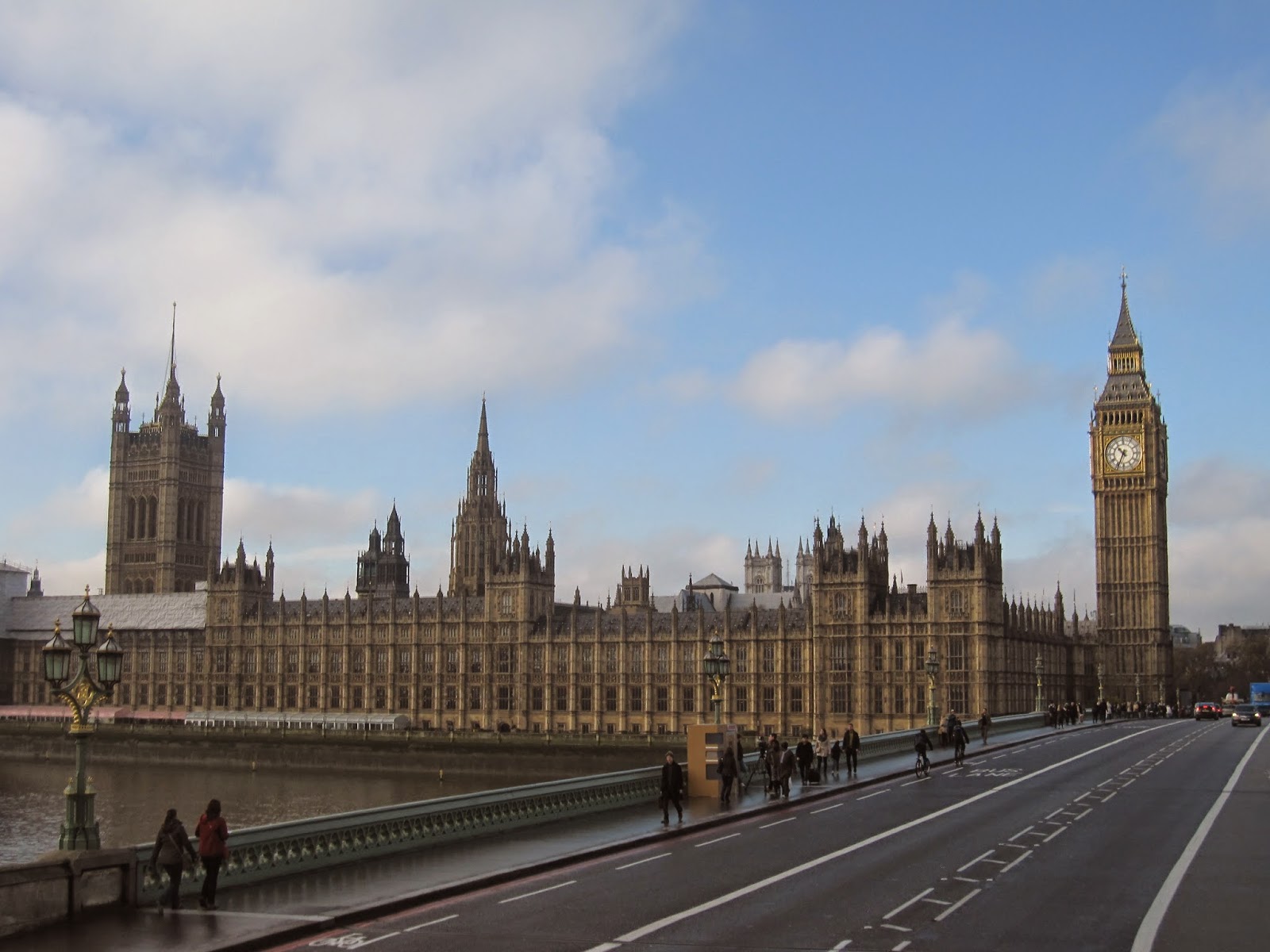 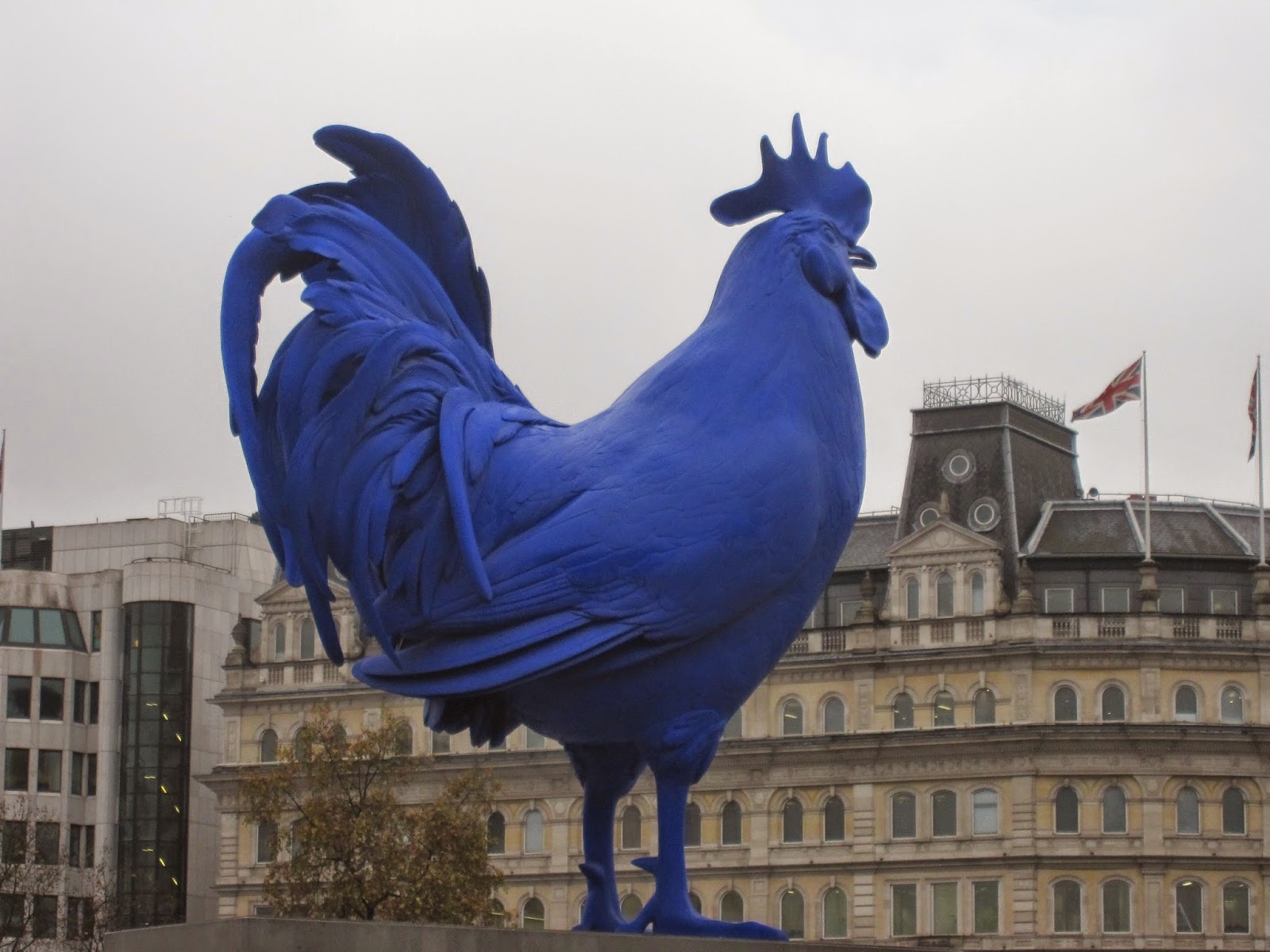 But I would like to finish with a thank you to Bill Oddie for the fabulous speech he made. He talked about the attacks that various NGOs were being faced with by people who support the shooting community. He asked everyone to continue to support the NGOs and recognise the positive difference they are trying to make. I like that Bill Oddie.

I will leave you with some famous faces: 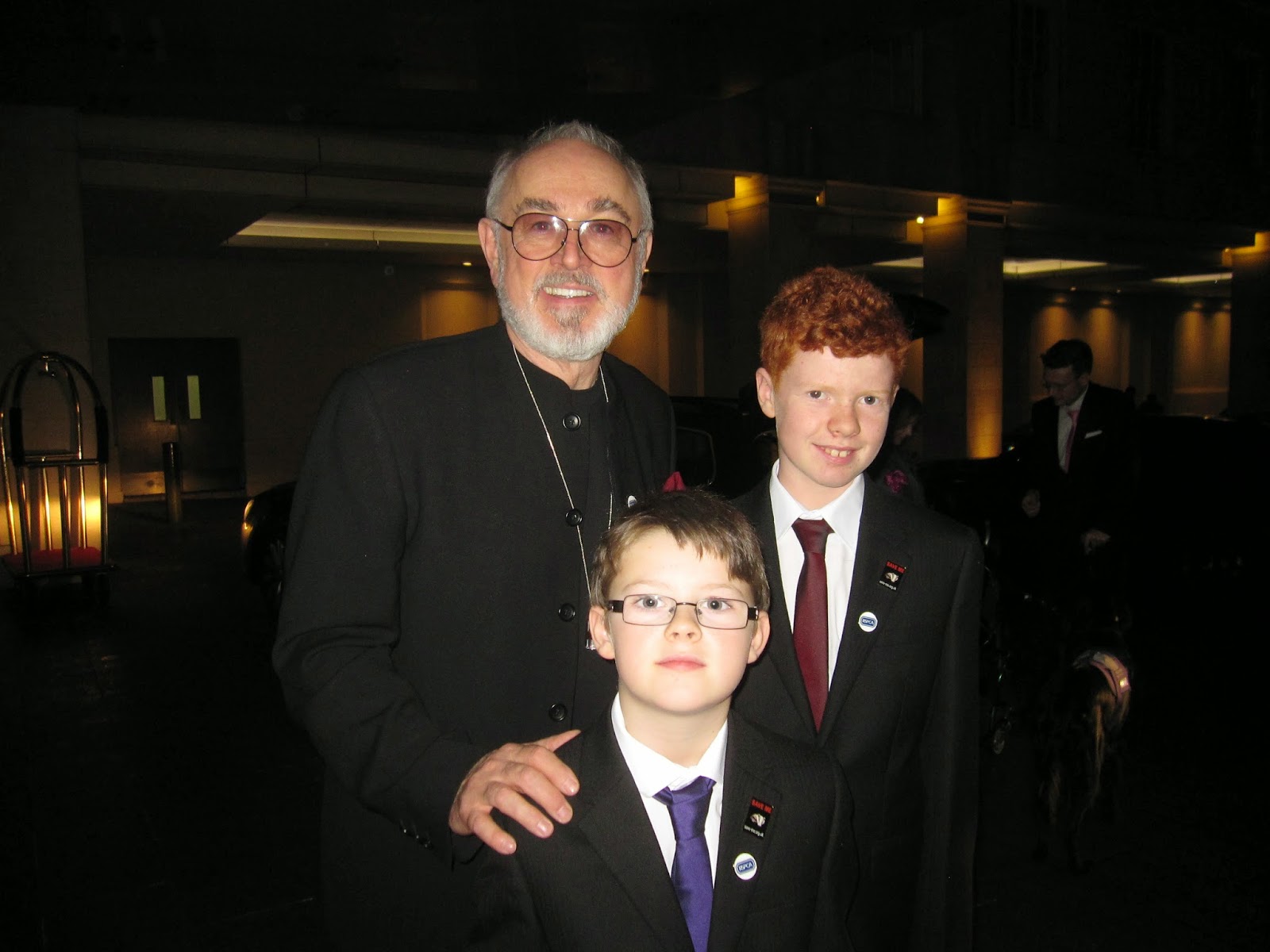 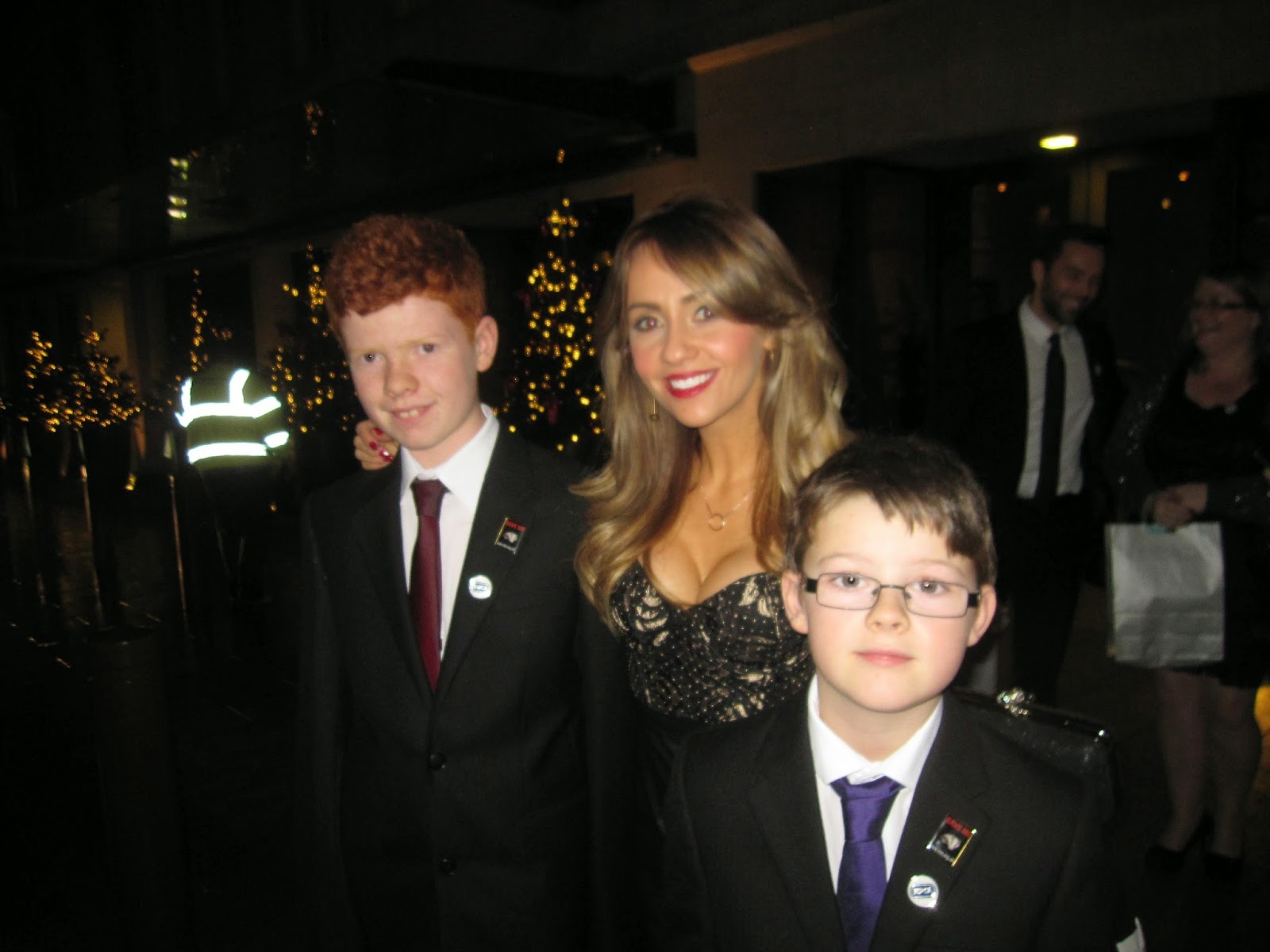 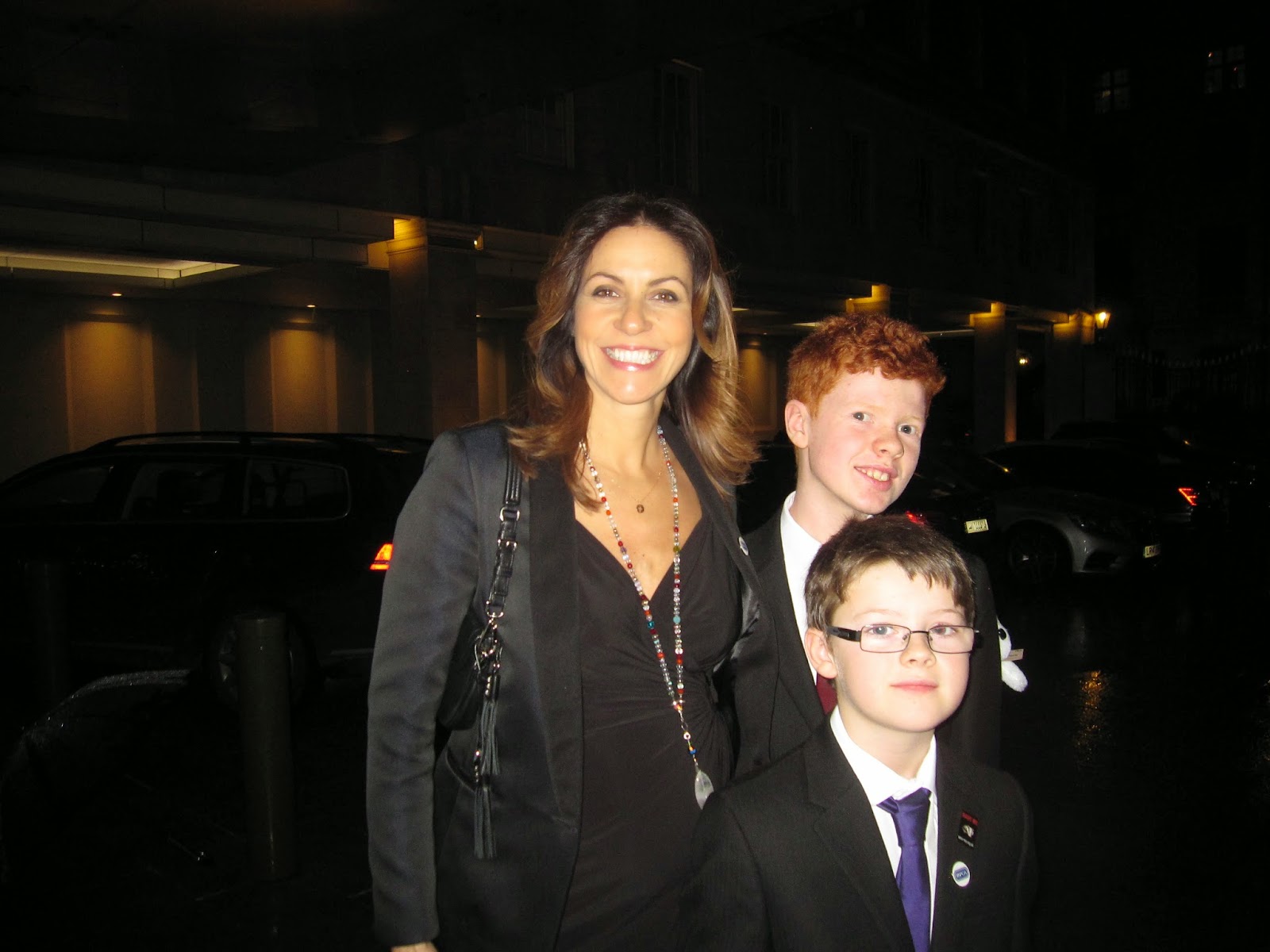