A Break from Revision

I was glad to have a break from my hard core revision this week, and spent today at RSPB Burton Mere Wetlands, where Harry my hen harrier spent his winter roost. Of course, Harry has now migrated to Beacon Fell where he will stay for the Summer months.

The morning started off very, very wet which dampened my spirits a little as I was hoping for a great day, especially with reports of two drake Garganey knocking around. However, the rain cleared by the time we arrived.

Out on the main scrape it was great to see all the Avocets with chicks fending of other species which could be a potential threat, in fact some of the chicks have actually been taken by birds of prey already, such as Kestrels. There was a kestrel mithering the Avocets for most of the time we were there, but the feisty Avocets are no push over and kept seeing it off.  In fact, they were chasing almost everything including the poor Pied Wagtail that dared to land on the island. 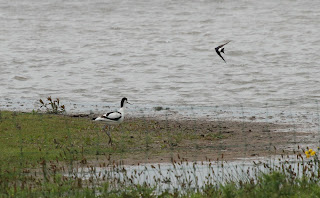 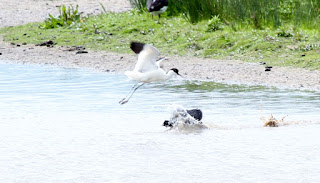 Avocet chasing off a coot

Other birds out on the main scrape included roughly 70  Black Tailed Godwits, but they were hard to count as the group kept lifting and separating (that Kestrel again). Along with the Godwits, there were Lapwing, Shelduck, Canada Geese, Gadwall, Tufted Duck and a single Oystercatcher.

Walking between the reed beds and the woods I could hear Blackcap, Chiffchaff, Reed Warbler and a Reed Bunting calling. A musical feast for the ears. Then, walking round the pools, we stopped to watch and admire a male Chaffinch singing within touching distance. 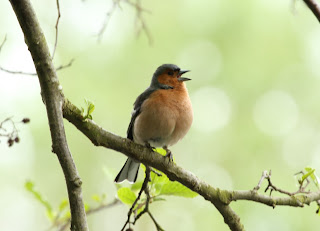 It's funny the things that can lift your spirits. When I look back on today, one of the things that makes me smile is that fluffed up Chaffinch, sat smugly on a branch, surrounded by fresh bursts of bright green leaves, singing it's heart out. 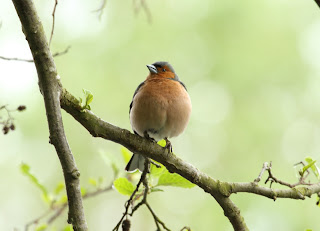 As we wandered slowly round the pools I spotted my first Little Grebe of the year.  Has anyone else noticed lower numbers this year? 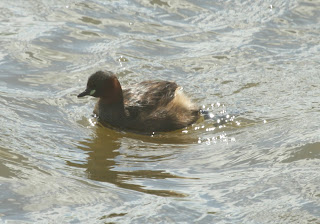 On the way back to the main hide I bumped in to Dan Trotman and it was great to catch up. We chatted a bit about Harry and about the next Hen Harrier Day on 9th August.

Despite the rain and cold, cold wind we still managed 47 species of bird, and the wind blew away the revision cobwebs. But back to it tomorrow!
Posted by Findlay Wilde at 17:48