Ever since the first Hen Harrier Day last year I had been looking forward to Hen Harrier Day 2015. This year promised to be even bigger and better, and I have to say, it didn't disappoint.

For a few months building up to Hen Harrier Day, and with the help of my dad, I had been building huge models to take along to the Buxton and Goyt Valley events. The idea was to make the hidden tools of raptor persecution larger than life, so they couldn't be hidden away. We made a life size grouse butt, a gin trap and a huge 13 ft high poison bottle. The only problem was, by the time we had finished, we really did need a bigger van!  Trying to work out how to get everything in to the van took 5 hours, it was like a really frustrating puzzle, but we finally got it all in (although Harry was not very impressed with how he had to travel). 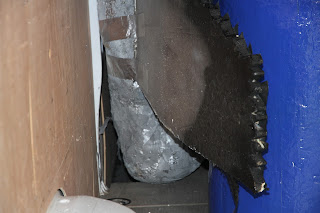 Harry squashed in upside down! 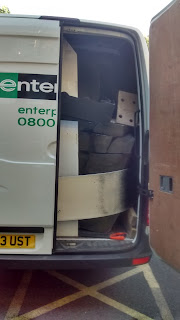 We had a great drive over the moors to Buxton on the Friday, in the sun, and stopped to enjoy the view at the Cat & Fiddle, where a Sparrowhawk did a great flyby.  With it being so close to the 12th August, I thought we would have seen a few Red Grouse at least, but we didn't see any. Well Hen Harriers definitely couldn't be blamed for that this year as no pairs bred on that particular moorland.

When we arrived in Buxton, we went straight to The Palace Hotel for a look and to meet up with a lovely lady called Susan Cross, one of the organisers of the Saturday evening event. We checked out the room and discussed where the models would go and all that sort of organising stuff.

Mark and Rosemary Avery arrived, so we had a good catch up and talked about all the plans for the weekend. It was great to meet Peter (Susan's husband) as well, who was a bit more technical that the rest of us.  After some very spicy Thai food (and it really was spicy, I though my mouth would never stop burning) with some amazing people, it was time to head off to our hotel and get some sleep before a big day on Saturday.

Saturday was all about setting up the room at the Palace Hotel for the Hen Harrier celebration evening, and repairing all the damage we had done to the models trying to get them into the van. 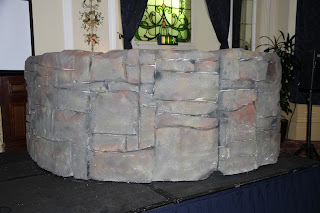 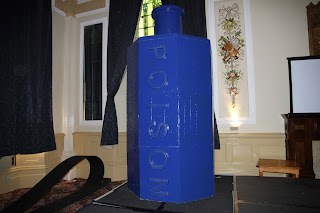 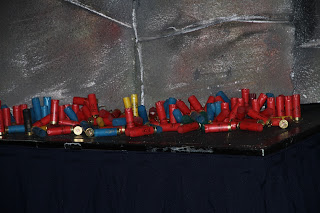 Phil and Charlie from Birders Against Wildlife Crime turned up and so did Henry Hen Harrier and one of his special minders (you know who you are). So there was a great buzz as we got everything ready. As a final touch, we placed a single used shotgun cartridge on every chair as a reminder of why we were all there.

People started to arrive for the evening and there were so many great people to talk to, all with ideas to share.  The really interesting thing I found was that although everyone didn't always agree on what could be done to save our Hen Harriers, everyone was united in what the problems and causes of the near extinction are and that we will all find a way to work together to save them. It was great to see new and old faces, like Brian (not old like "old" of course) from Rare Bird Alert who have done a lot to support Hen Harrier Day.  It was also great to see some younger people there like Georgia Locock, Billy Stockwell, Jack and Lucy Farrell. 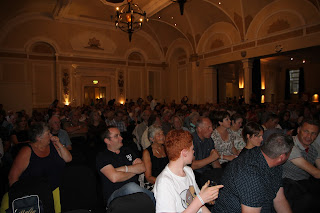 Not a spare seat

The talks in the evening were fascinating and they couldn't have been more different; Mark Avery who talked with so much common sense, Water & Stone (Susan Cross and Gordon), Amanda Miller (RSPB) who gave a great talk and also showed the Skydancer video, Mark Cocker (a brilliant writer) and Jeremy Deller ( who designed that epic Hen Harrier carrying the red Range Rover picture), me (I talked about why the models were made so big) and then Chris Packham who just captivated everyone with his passion.  Charlie Moores then closed off the talks and gave everyone all the information for Sunday. 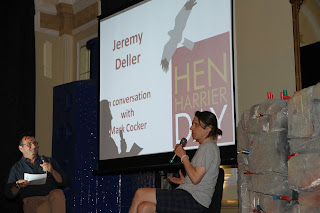 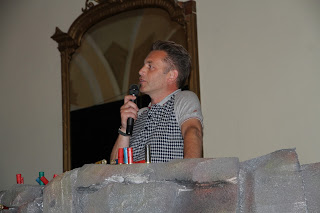 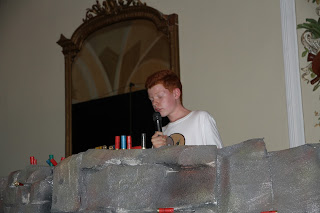 As part of my talk, I also showed a video of how all the props for the evening were made, which you can see here:


I finished my talk with some news I was looking forward to sharing. A few weeks ago I met up with the founder of Ecotricity, Dale Vince at the WOMAD festival. I told Dale all about the plight of the Hen Harrier and asked him if Ecotricity could support the satellite tagging of young Hen Harriers. A week later I got an email from Helen Taylor, confirming that Ecotricity will be funding some satellite tagging of Hen Harriers. I am so excited about working with them on this and so grateful that they are willing to help in this way. I have got them a copy of Inglorious signed by Mark Avery and Chris Packham as a small thank you and to show them why their offer of support is so important.

It was a fantastic evening and so many people stayed on after all the presentations to talk, share ideas and fill you with hope that things are changing.

And then it was Sunday. The main event. The chance for people to shout loud that we want our Hen Harriers back. We had another early start to load up the van and then unload the butt and Harry at the Goyt Valley. 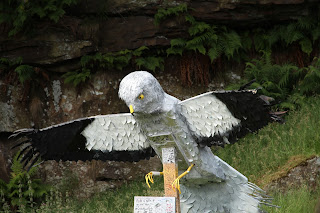 The Goyt Valley was stunning. Redstarts were flitting past with that giveaway flash of red, Willow Warblers were singing, a young family of Wrens were calling to each other and keeping Harley engrossed for ages, and a Dipper was feeding in the stream below. 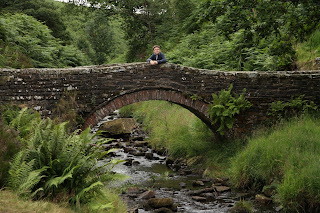 Beyond the green of the valley you could see a tired, burnt, controlled piece of moorland, a huge reminder of why we were there.

And then they started coming. People arriving from both ends of the valley. People who had walked miles because they care and because they want to make a difference. And do you know what, these people were not just birders, they weren't just wildlife obsessed; they were people who are angry that the nature that is there for all of us, that isn't owned by anyone, is being taken away from us. And they are right to be angry. 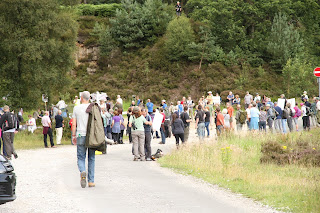 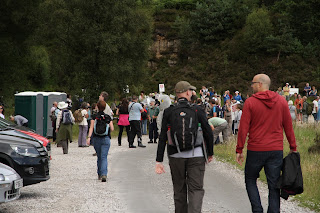 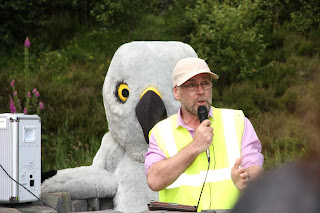 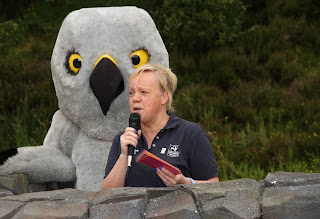 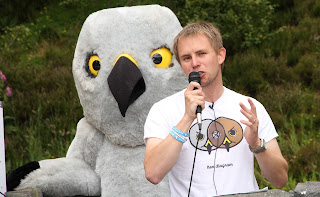 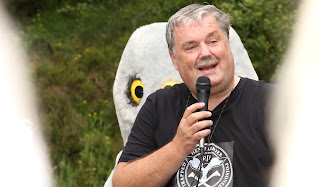 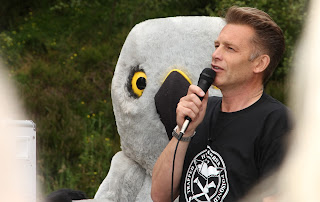 The facts are simple, people can argue all they want about whose fault it is, but the one fact that can't be argued against, which ever side you are on, is that Hen Harriers are missing from our moorland in England. And that is where you and I can make a big difference. We need everyone out there to know that extinction of a native bird, a top predator, a ghost of the moors is happening. We all need to step up and speak out as no-one has the right to deprive us of our wildlife.

I will leave you with some more pictures of a great day, and I hope you see all of you at Hen Harrier Day 2016. 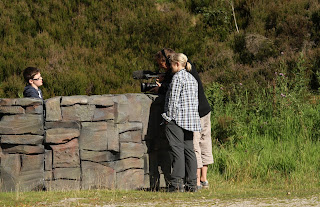 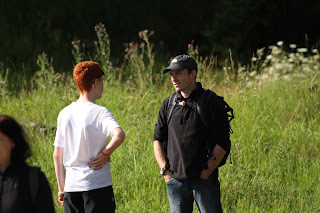 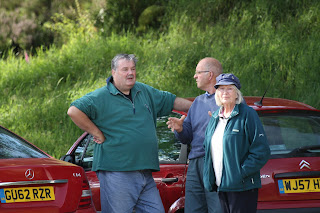 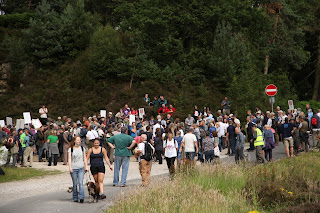 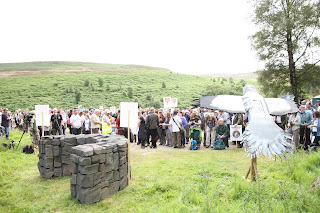 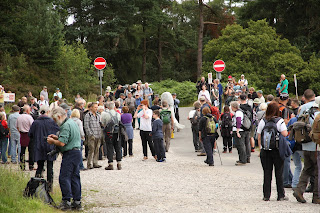 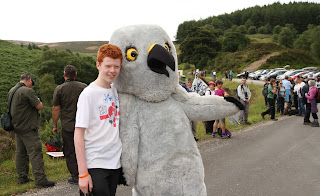