Sparrowhawk Microwaves Blackbird - or so it seemed!

I posted a picture on Twitter recently that someone had sent to me. The picture was taken on his phone, and it has had hundreds of re-tweets on twitter. So here is that picture: 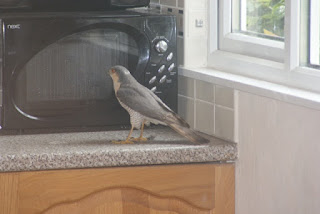 I had received the picture to confirm the identification of the bird, but I also want to share with you the story behind the picture. This is what had happened:

"We left the door open while we we taking shopping into kitchen, when in came a Blackbird followed by the Sparrowhawk, which took it out of the air. It tried to leave via the window, sadly closed. It dropped the bird and landed where you see it. I picked up the dead blackbird put it on the sill and opened the window. It left without the bird."

So there is the story behind that amazing picture. The comments on Twitter have been great if you have time to read through them, but here are just a few of them:

@birdingprof
I'm sure it used to be traditional to bake them in a pie, I guess technology has moved on

@ximenesuk
Sparrowhawk deciding what setting to put the blackbird on now it has got it into the kitchen.

So over to all of you, what so you think the Sparrowhawk is thinking?