I've just started back at school, now in year 10, and already the pressure is on with the work that I have to complete to achieve my end GCSE grades at the end of year 11. Every moment counts, which sadly, to my disappointment, means there won't be as much time for birding, wildlife conservation and the things I really want to do; however education comes first. And it will of course help me to keep making a difference in the future.

Therefore before all of this heavy school work commences and is in full swing, I was able to have my last big birding weekend for a while, and what better place to spend it at than at Spurn with the team and members of Spurn Bird Observatory. So that is where I spent last weekend.

During the first week in October you are almost guaranteed to get something interesting dropping in and witness the true spectacles of migration, and this was proven almost immediately.  When I arrived, I was able to observe good sized flocks of 20 - 30 Tree Sparrows passing over regularly, calling as they did so.

I've skipped ahead a bit here, Spurn gets to you like that, so lets revert right back to the start point of setting off, which I did so at 5:30am on the Saturday morning, due to us (me and mum) wanting to get there for a good time, knowing there was a 3 hour journey ahead. 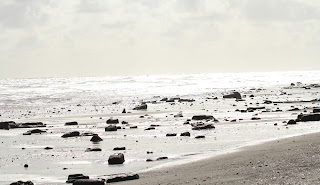 We arrived at the Obs for about 8:15am. It was getting light with a wind direction of north easterlies, which seemed rather promising for the day ahead migration wise. There were already plenty of birders about, so I couldn't wait to get involved. I did this firstly by visiting the sea watching hut. We walked there via The Triangle, instantly being greeted by a juvenile Marsh Harrier! The sun was behind us, therefore shining straight onto the bird giving outstanding views as it cruised slowly past and out over the Humber, scattering all the roosting waders (mainly Knot), giving us a just an amazing spectacle. 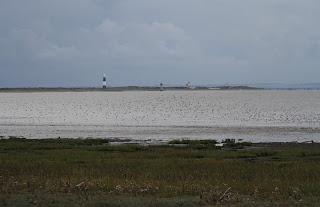 It was evident migrants were already around with Goldcrests and phyllosc warblers calling from every other bush; however they were reasonably elusive due to the relatively strong wind. Whinchats were showing better though, with birds lined up along the majority of fence posts separating the fields; (which were also absolutely teeming with Reed Bunting and Meadow Pipits).

I arrived at the sea watching hut, setting up outside so I had the joys of the migrating avian species going over as well. Several Arctic and Great Skuas flew south along with several Red Throated Diver; however to be honest the sea watching wasn't the best thing in the morning, as eyes were more focused on the passerine movement.

For the remainder of the morning I was lucky enough to take part in some ringing that takes place every day when the weather is suitable. I must say a massive thank you to Paul Collins for allowing me to join in. I arrived to help out at just gone 10am, so the catch rate had decreased from what it would have been earlier; nevertheless we still caught a fair few Tree Sparrow and Meadow Pipit. It was great to see Tree Sparrow in the hand after so long and even more amazing to see the amount going over. 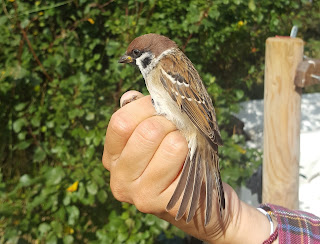 Whilst sea watching later that afternoon, news broke through of a Wryneck showing well at Easington Gas Terminal. This would be a UK lifer for me and was therefore irresistible to go and see (a bird like that always is, even if you've seen one before!!). I got a lift from Iggy (thanks Iggy), who was also sea watching with me at the time, to the terminal where we were greeted by a couple of birders who had seen it briefly.

After a good walk around the site, we eventually came across a group of birders trained on the bird. It showed amazingly well for 5 minutes or so, feeding on a verge of a grass bank consuming ants. However, it also seemed happy hanging out on the rip-rap defending the beach. I managed to get some decent pictures before it flew off into the terminal itself where it wasn't seen again that evening. 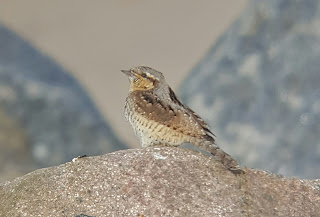 You'd think that would be the end of the first day, however it just got better and better, even though it was getting late in the day. After the successful Wryneck watch, I returned to the sea watching hut as the winds had picked up quite a lot, so this type of birding seemed promising. As expected, the sea watching hut was full on arrival, however a few birders had set up shop outside, therefore I decided to join them. As soon as I started scanning the vast North Sea, I instantly came across 15 Little Gull, closely followed by 8 Arctic Skua, already a fantastic start and I hadn't had the scope up for more than 5 minutes! For the next 20 minutes or so, passage was steady and we were entertained by close flybys of Sooty Shearwater, Great and Arctic Skuas.

I must say the day started off quite slowly, with strong SW winds. Due to this, all focus was on the sea watching, which produced no where near as many birds as the Saturday, however a close flyby of  a Balearic Shearwater was well worth the hour or so sea watch.

News came through later on of 2 Yellow Browed Warbler at Sammy's Point, a short walk from the Spurn stronghold. I arrived and was immediately greeted by my first Redwing and Brambling of the year that must have just come in with the NE winds. The winds had swung around late morning making the afternoon passerine migration much better. I spent about 2 hours in the paddock searching for warblers; however they were proving highly elusive in the relatively strong wind. Apart from the huge count of Goldcrest which seemed to occupy every bush, a late fly through of a Sand Martin was the only highlight from that particular area along with a few Wheatear. 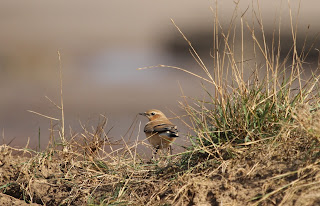 I arrived back via the Crown and Anchor where I instantly noticed a large group of birders surrounding the Cliff Farm garden. I didn't even need to ask the observers what was present, as before I even had chance to, I heard the charismatic call of at least 5 different Yellow Browed Warblers. They were literally calling from every direction. Absolutely "fresh in" as some people would say. 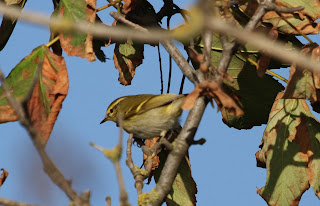 Most of these birds were moving around with the Goldcrest flocks, which to our relief were all showing well, active, and happily feeding on the outer branches of trees and bushes; which of course encouraged the Yellow Browed Warblers to do so.

I spent the rest of my time watching the passerine movement from this location There had to be over 20 Yellow Browed Warbler that filtered past over the course of the afternoon, therefore to no-one's surprise, news came through that one had just been caught by the Obs ringing team in Kew Villa.

Due to me being close to the area I decided to head over there and take a look, after all, it's not often you see a bird like a Yellow Browed Warbler really close up. I arrived with good time, as the bird hadn't been processed. I felt so privileged when I was offered the bird to ring and study close up (again thank you to Paul Collins). 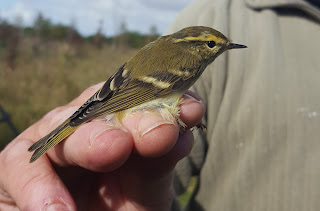 These are particularly small warblers and weigh ever so slightly more than a Goldcrest, our smallest resident bird, so it's amazing to think that these birds have flown all the way across the North Sea.

I must say that ringing the Yellow Browed Warbler and seeing it in the hand had to be the best end to yet another magical weekend at Spurn. I can't wait until next time, hopefully not too long. Before that though, I have to work hard. I've got one chance to get these good grades, and all the time in the world for birding after that........maybe just a bit of birding though!!!!

Linking to Wild Bird Wednesday
Posted by Findlay Wilde at 18:28