During the last couple of weeks, Britain has been hit by relatively strong easterly winds blowing in from the continent. Prior to this we had solid westerlies which seemed to put a bit of a hold on some of our migrant birds moving in and out.

I'm relieved to say that these winds have pressed play on migration again, and many species have been steadily moving through the country and making landfall. As many of you know, the east coast could be described as a different country at the moment with the quality and quantity of some of the bird species and numbers that have been grounded over there.

However, it's not just all about the east coast; whilst I was ringing over the weekend of 8th & 9th October, the variety of species, and amount in some cases, certainly suggested birds were on the move and gave a very autumnal feel to the air.

On the Saturday we headed up to one of our most used Autumn/Winter sites for the second time this Autumn (you can read the first encounter here).

Conditions were looking good; overcast and relatively cool. Whilst setting the nets up I heard at least half a dozen Redwing go over which was a promising start, as this was the first time I had heard them on the west coast this Autumn.

As soon as dawn was upon us and the sun rising, it was clear to see thrushes were on the move and in decent numbers; primarily Redwing heading over in various sized flocks, sometimes just 5 or 6, other times a couple of hundred. Sometimes I think small numbers of Redwing can look like Starlings but the evidence was clear in our first net round as we caught 8 Redwing. 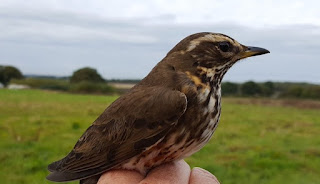 There was a noticeable lack of warblers present, with only 2 Blackcaps caught throughout the whole session (1 male, 1 female, both juveniles), and 2 Chiffchaff.

For the time of year you'd certainly expect there to be decent sized numbers of Goldcrest present; however only 3 were caught during the entire session.

Moving into mid morning, a constant trickle of Redwings continued to be caught and we ended on 22. Quite a few of the Redwings had passengers in the name of ticks close to their bills or eyes which required removal before release. The other point of interest was the 25% weight difference between the heaviest and the lightest bird.

A vocal Yellow Browed Warbler was very mobile and active which was a delight to see; however it didn't find it's way in to our nets. Certainly other Yellow Browed Warblers have been around the area with Peter Alker (you can read about it on Peter's blog Two In A Bush here) catching one on the 22nd September and another one the very same weekend as we were out.

The last time we caught a YBW was on the 25th October 2014, you can read all about that here.  Another 'invasion' year it would seem for the species'.  It was surely only a matter of time before we had another encounter.

Other factors of note were the first Fieldfares to go over and numerous finch species passing, including a decent tally of 22 Lesser Redpoll.

A new day but different site today.  It had a really good feel to be out again, especially when compared with last Autumn when the wind and rain really put a stop to our efforts. So far, after the summer break, it's been business as usual every weekend.

There was plenty of birdsong early on, including that of a Yellow Browed Warbler. Would today be our next encounter? Another 18 Redwing moved our weekend total up to 40 and a good variety of tits, Goldcrests, Blackcaps and Chiffchaffs kept us busy most of the morning.

It was mid morning by the time we found a Yellow Browed Warbler in the net, but unexpectedly there were actually two of this tiny bird (about the same size as a Goldcrest). 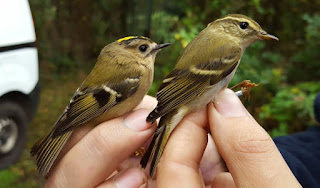 I was very fortunate to have ringed this species literally a week earlier at Spurn Bird Observatory (which you can read about here) so to ring another one and see the bird in detail in the hand again was a privilege. 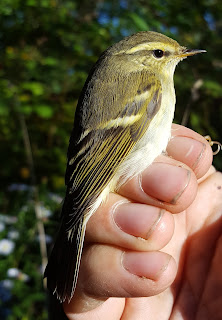 Then just as you are thinking your day couldn’t get any better, and to everyone's' amazement, about an hour later, we caught another 2. Unbelievable!! 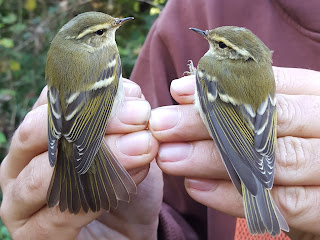 So the weekend was really dominated by the Thrushes but perhaps the Warblers stole the show right at the very end.

Linking to Wild Bird Wednesday
Posted by Findlay Wilde at 18:53