Saturday was another epic ringing session. The time to get up is finally getting a bit later and so I had a lie in until 4am. We met ScouseRinger at 5:30am when it was still dark.

When we had set the nets up it was just getting light and, as we were walking down a track back to Peters van to get the ringing equipment, we saw the ghostly shadows of two Barn Owls hunting together; it was a true spectacle of nature. I have seen some amazing wildlife things in my life like the murmaration at Marbury Park or the flock of 400 Black Tailed Godwits that once flew over my head, but the Barn Owl spectacle has got to be one of my top ten.

As it got properly light, birds started to move around a bit more, especially the flocks of Redwing that had just arrived from Scandinavia.  Our first net round brought us a few Robins a Blackbird and our first 4 Redwing, I have never ringed or even held Redwing before so it was rather special.  As well as big flocks of Redwing, large numbers of Pink Footed Geese were passing over. 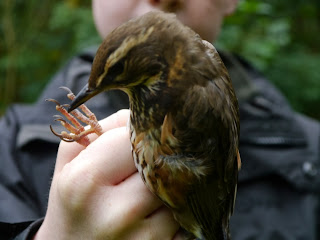 Redwing catches were steady throughout the morning and it was very interesting processing good numbers of these birds to understand their characteristics. Redwings take a ring size of CC  and by the end of the session we had processed 43 Redwings. There were also smaller numbers of Fieldfare moving through and they often mix in with the Redwing flocks .We only caught one Fieldfare though. 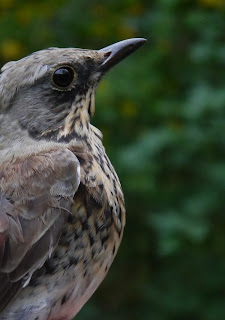 This Fieldfare we caught was a female due to the markings on the crown. 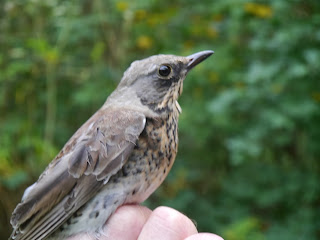 It really was the day of the thrushes, catching 4 species Redwing, Blackbird, Fieldfare, and Song Thrush; one of my favorites, these are really noisy birds just like Great Spotted Woodpeckers (another nice species of bird we caught today, first time for a while). Some of the Redwings we caught today were possibly from the Icelandic form as they can have a greater wing length and have darker plumage. 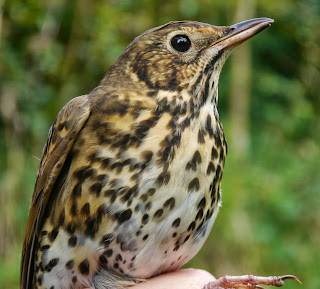 Another great session with lots of learning.