I was really looking forward to Sunday afternoon as I was going out to Marton Mere to meet David McGrath. I was really excited when he told us we would be taken on a tour by himself around the nature reserve.

We started off our walk on a gritty path along the the mere, getting good views of an Owl Box with actual Barn Owls roosting in it. As we moved further down the track we came to some scrub type land and hidden within the density of leaves and twigs sat a Long Eared Owl, perched, barely moving. Apparently there had been three seen together at once, however I was really pleased with just the one (my first ever Long Eared Owl) and got great views through all the scopes from Dave the other particularly kind people with us on the tour. Believe me, that is a Long Eared Owl in the picture below. 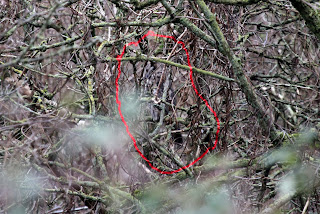 Reverting back to Barn Owls; as it soon became dusk, well almost dusk, the adult Barn Owl popped it's head from within the next box and tried to decide whether it was the right time to hunt, and it was. Soon after this picture was taken the Barn Owl flew from the next box and twirled above it once or twice then set off around the area to hunt. We kept catching sight of it hunting along the edges of the mere and over the scrub land. 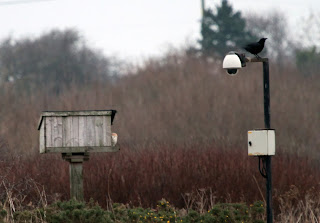 Of course like most reserves this one gets rare visitors and David said it was very rare to get Pintail on the mere. As soon as he said that, I spotted three coming in to land on the mere, possibly to roost. David was speechless and I just had a big grin on my face. 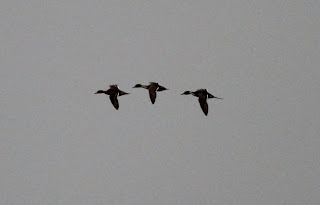 When it was almost completely dark the 400 or so Teal had almost completely vanished from the centre of lake and had gone into roost within the reeds. They were the first ones I had seen this year, and a bird I never get tired of seeing. 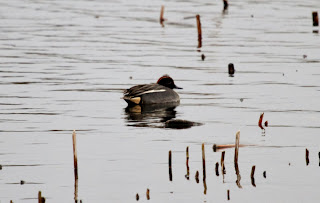 We didn't get to see the otters or the Bittern, but if Dave lets me, I would really like to visit again.  Thanks David  and everyone else for their time and help; definitely a reserve I would visit again.

Also a big thank you to John Poland who gave me a copy of his brilliant book The Vegetative Key to the British Flora.