The weather has been really bad over the Christmas holidays; windy, wet, more windy and then even wetter. So it has been quite frustrating, but we have managed two sessions so far this year, and here are the details.

There was a beautiful sunrise over the countryside where we were ringing.

I was really excited about our first ringing session of the New Year and it didn't disappoint; my first Brambling of this season put in an appearance and got us off to a great start for 2014. 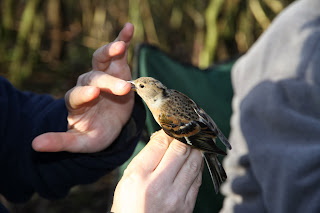 Lesser Redpoll also made an appearance and were reasonably active in the session, catching a steady number as the morning moved on. 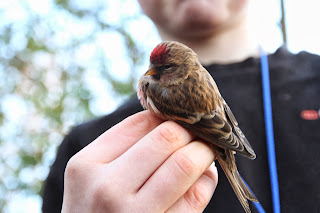 A bird we hadn't caught for a while was the Great Spotted Woodpecker so it was really nice to be able to handle this species again (it was a re-trap). 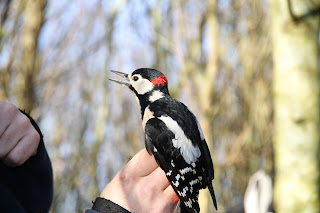 Onto my second session of ringing of the New Year. This time we were at one of my favorite sites, we didn't catch many birds, but even though the session didn't let us down... 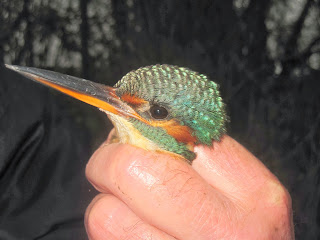 The final bird I ringed for my Christmas Holidays was a juvenile female Kingfisher. How many times have I seen a turquoise blue flash zip down the river or shoot across the vision of my eyes, hundreds, but only ever once or twice have I seen it perched up on a small branch or river bank. Never have I seen one in the hand which was the main reason why it was so amazing that I had the privilege to ring this bird...

You can tell it is a female because of the orange lower mandible. The greenish colour on it's wings shows that it is a juvenile. 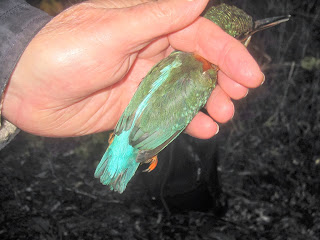 What an end to a fabulous Christmas Holiday, I hope you have had a good one too. Back to school for me tomorrow, I bet it stops raining next week!