Blackbirds are typical garden bird and a bird that nests in our garden every year. This year we followed in their foot steps all the way through from building the nest to the chicks fledging. Every year two pairs of Blackbirds battle try to nest in our thick Leylandii Hedge and in our Wisteria. This year the pair in the Wisteria claimed the garden as their territory and I only noticed they were nesting when I saw the female fly up from the lawn into the tree with nesting material. Blackbird nests are usually quite easy to find, however they can be quite tricky when they are located in bramble bushes and things like that, but they are worth looking out for. 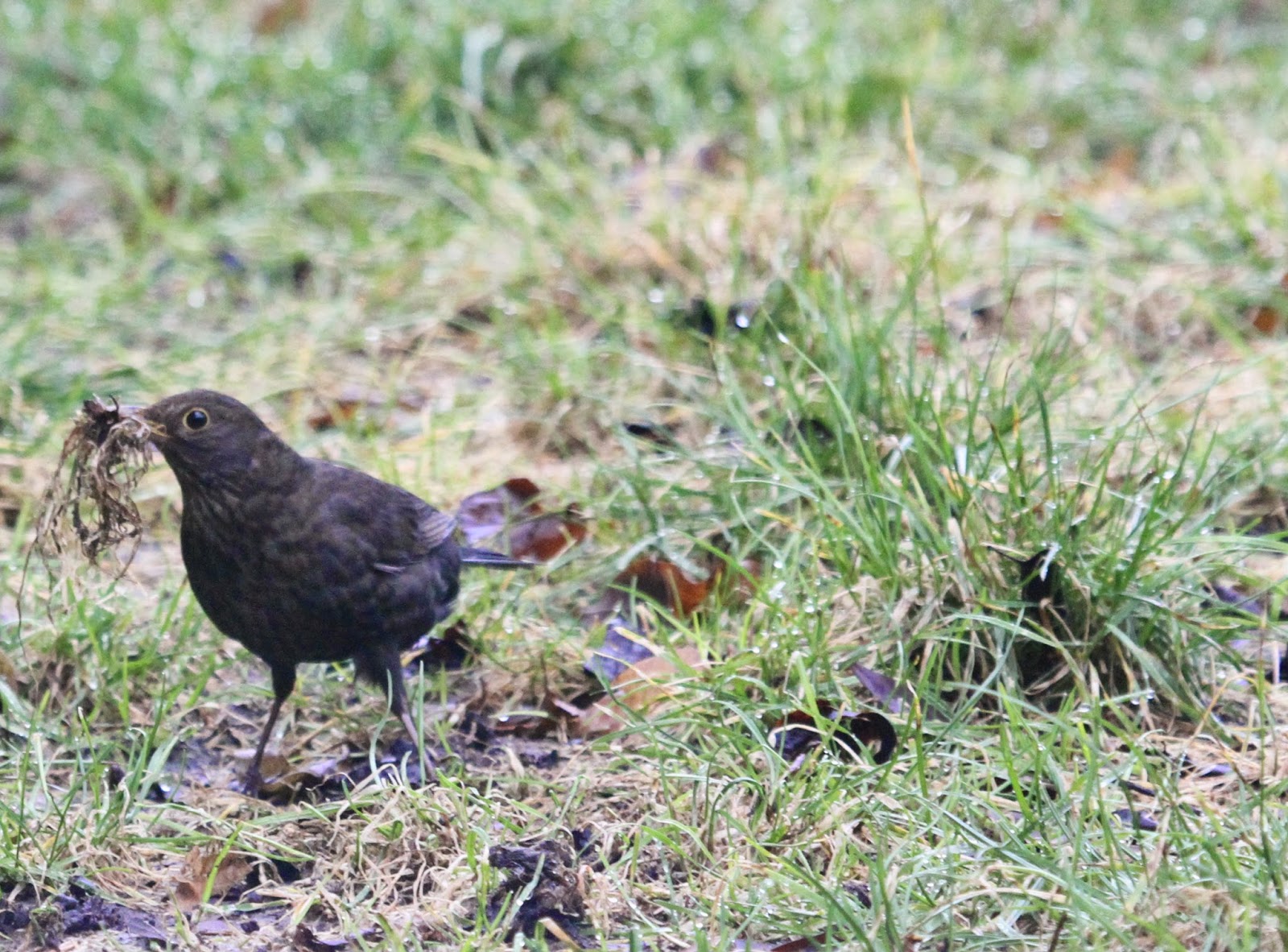 As the days past the nest was almost complete, however they still needed to line it. I thought the Blackbird had abandoned the nest as it seemed to disappear 2 days earlier before the nest was lined line it so I was quite chuffed to see it back, especially as there were Magpies lurking in the trees nearby. 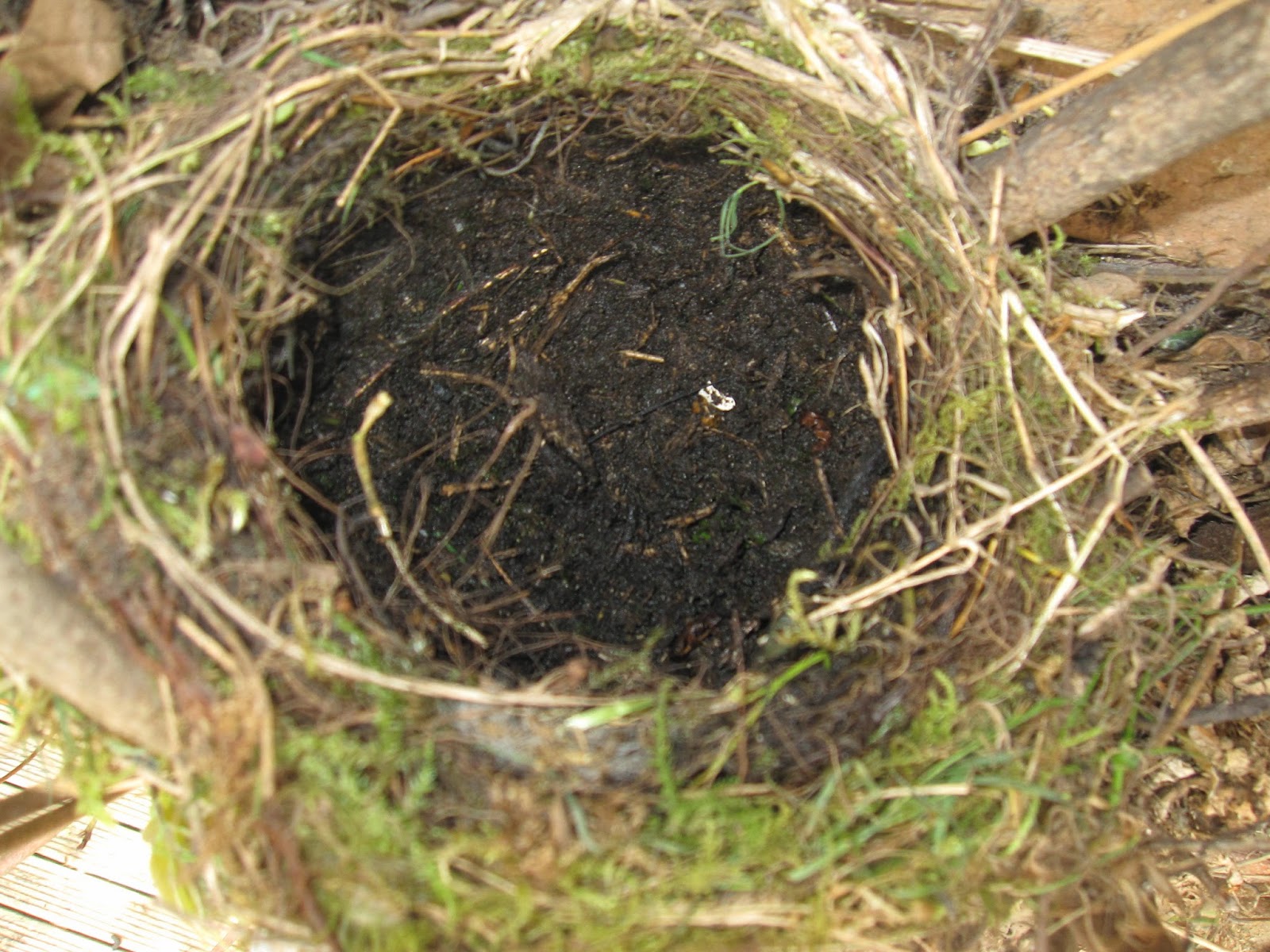 20th April - Nest not lined yet

After the nest had been lined by grasses, we checked it again and found that she had laid two eggs. This was really exciting, however in our garden we had Magpie's attempting to nest and on the look out for an easy snack. They did steal one egg however the male Blackbird kept fighting them off. 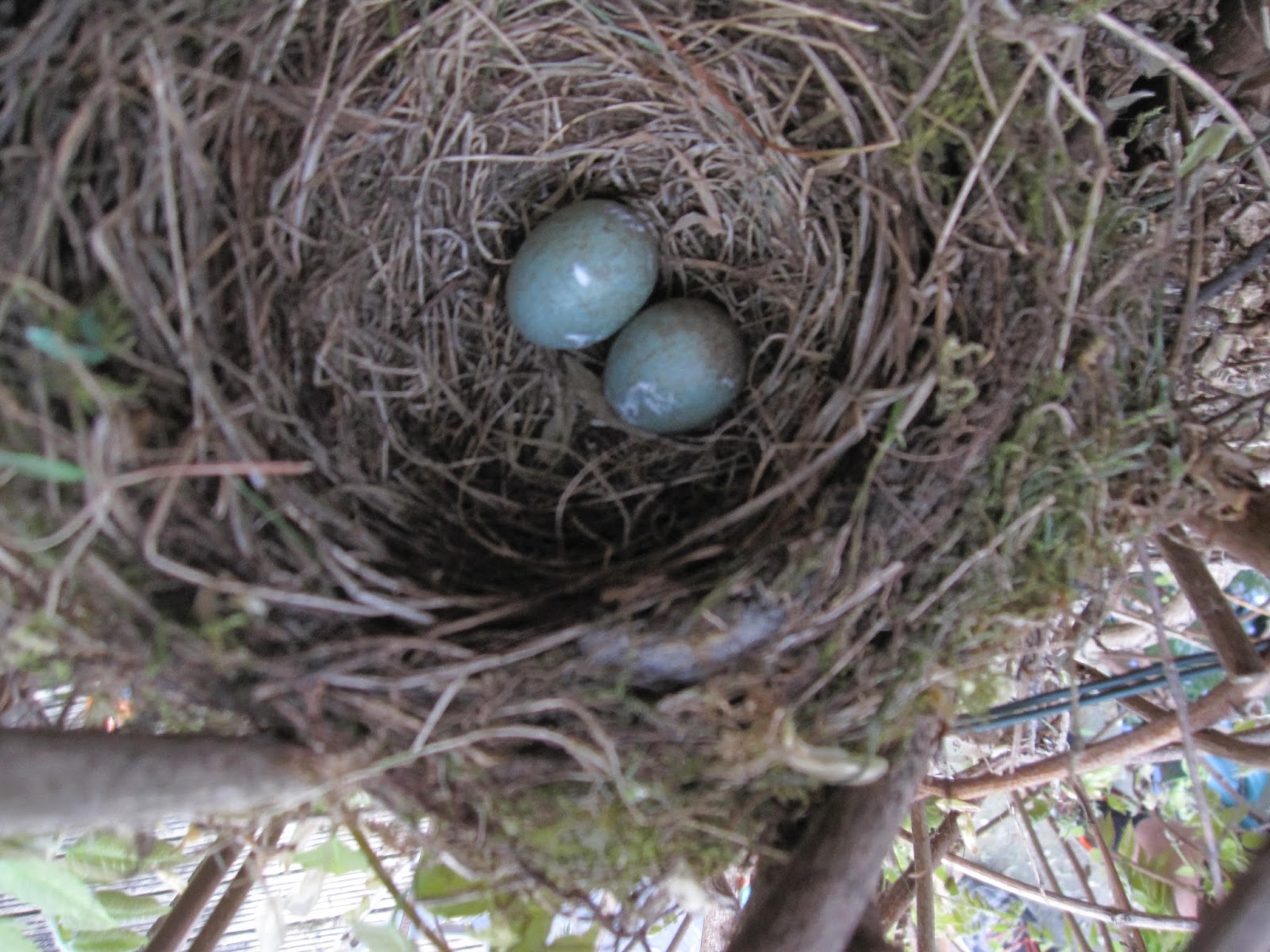 The female started to incubate the eggs, so when she got off the nest we went to see how many eggs there were now. When we looked, it was great to find that there were actually five eggs, fantastic news. 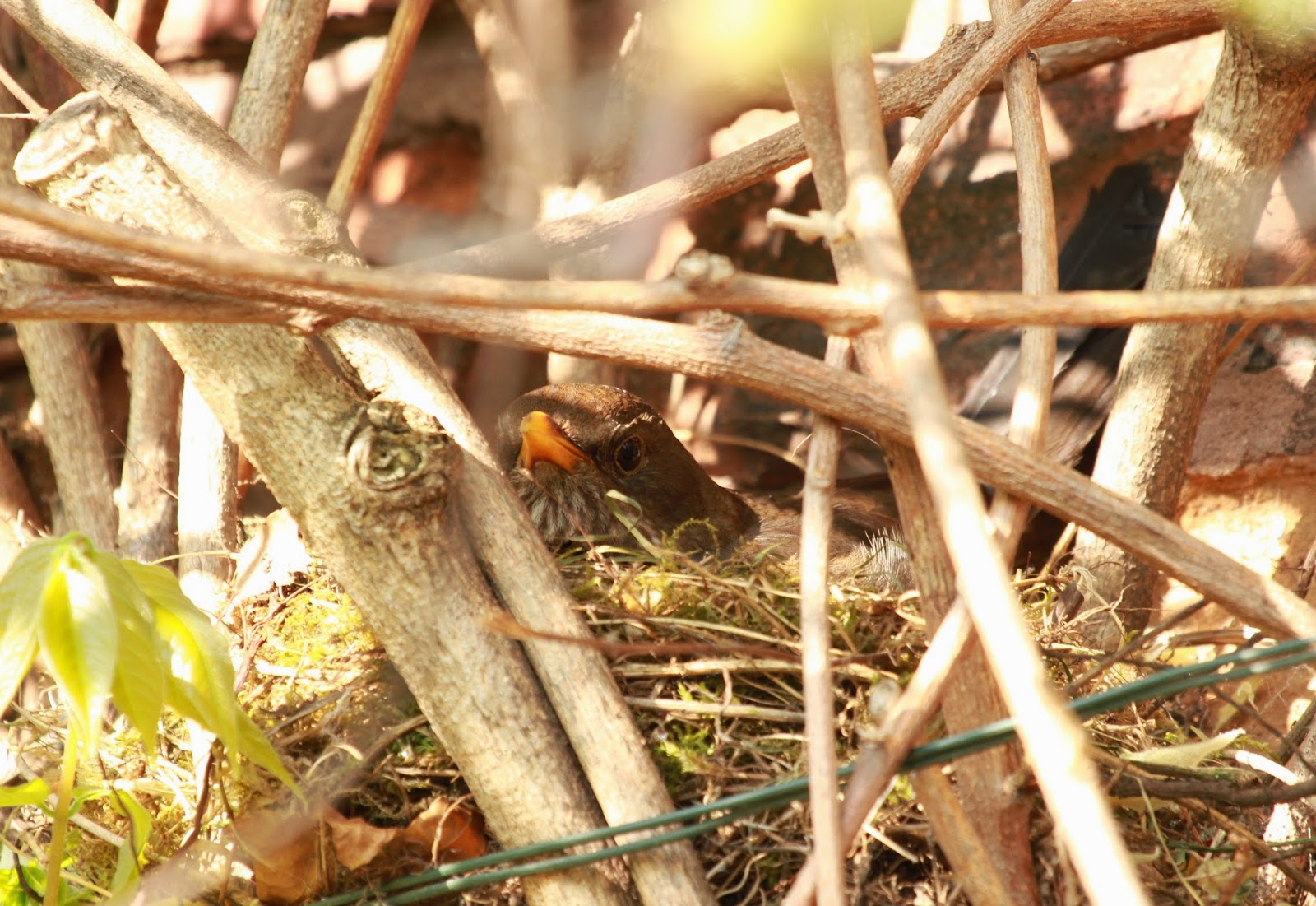 As I watched the female feed herself, I waited in eager anticipation  for the chicks to hatch. The male Blackbird was never far away and stayed on Magpie and Starling duty, doing a great job. 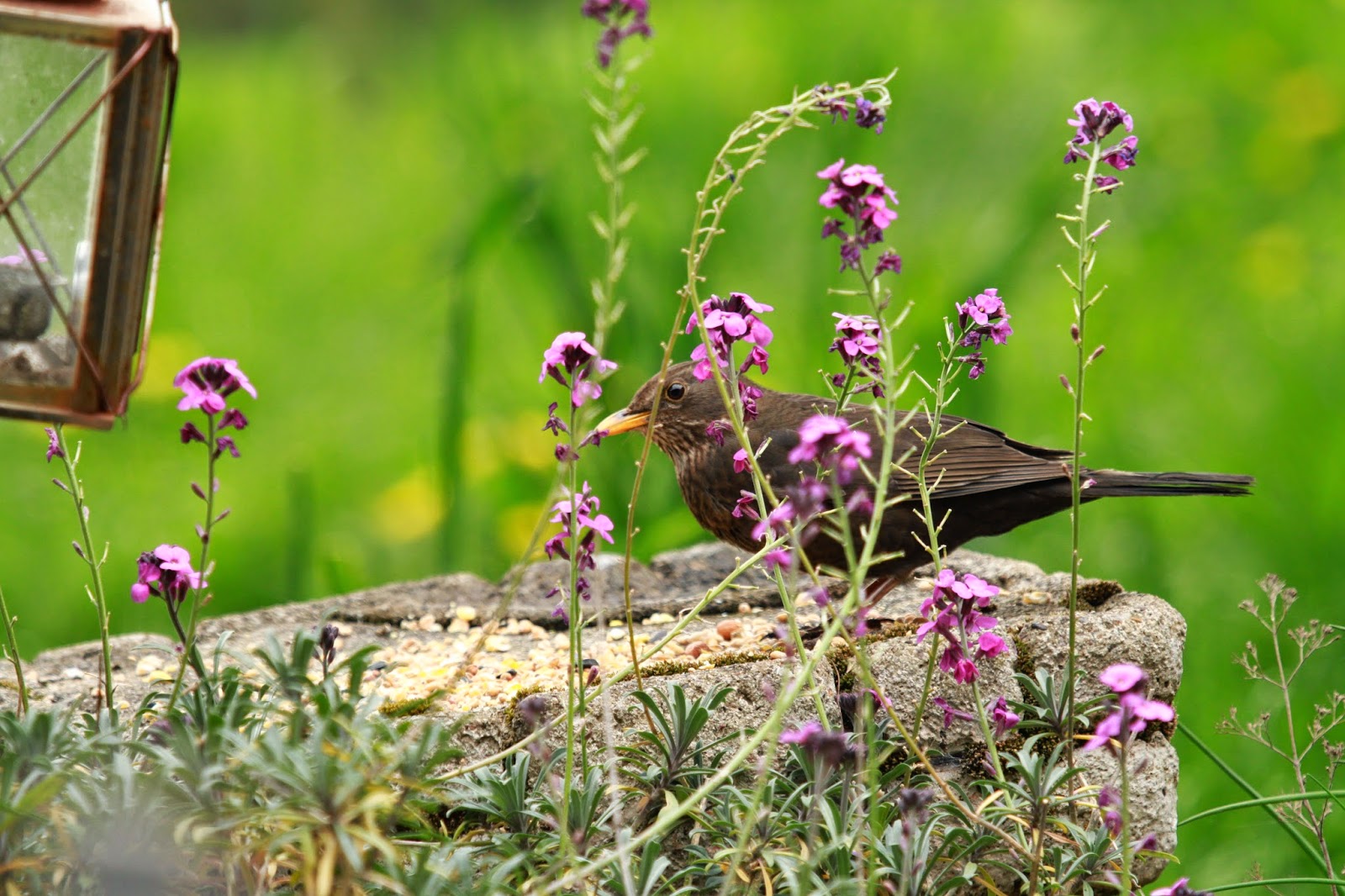 Female taking a quick snack break - I put meal worms out for her.

And then after about 2 and a bit weeks the eggs finally hatched and then guess what popped their heads up. Five gorgeous naked chicks; it was great to see them hatched, however they were more prone to predators now with all the activity of feeding and the noise they were making. 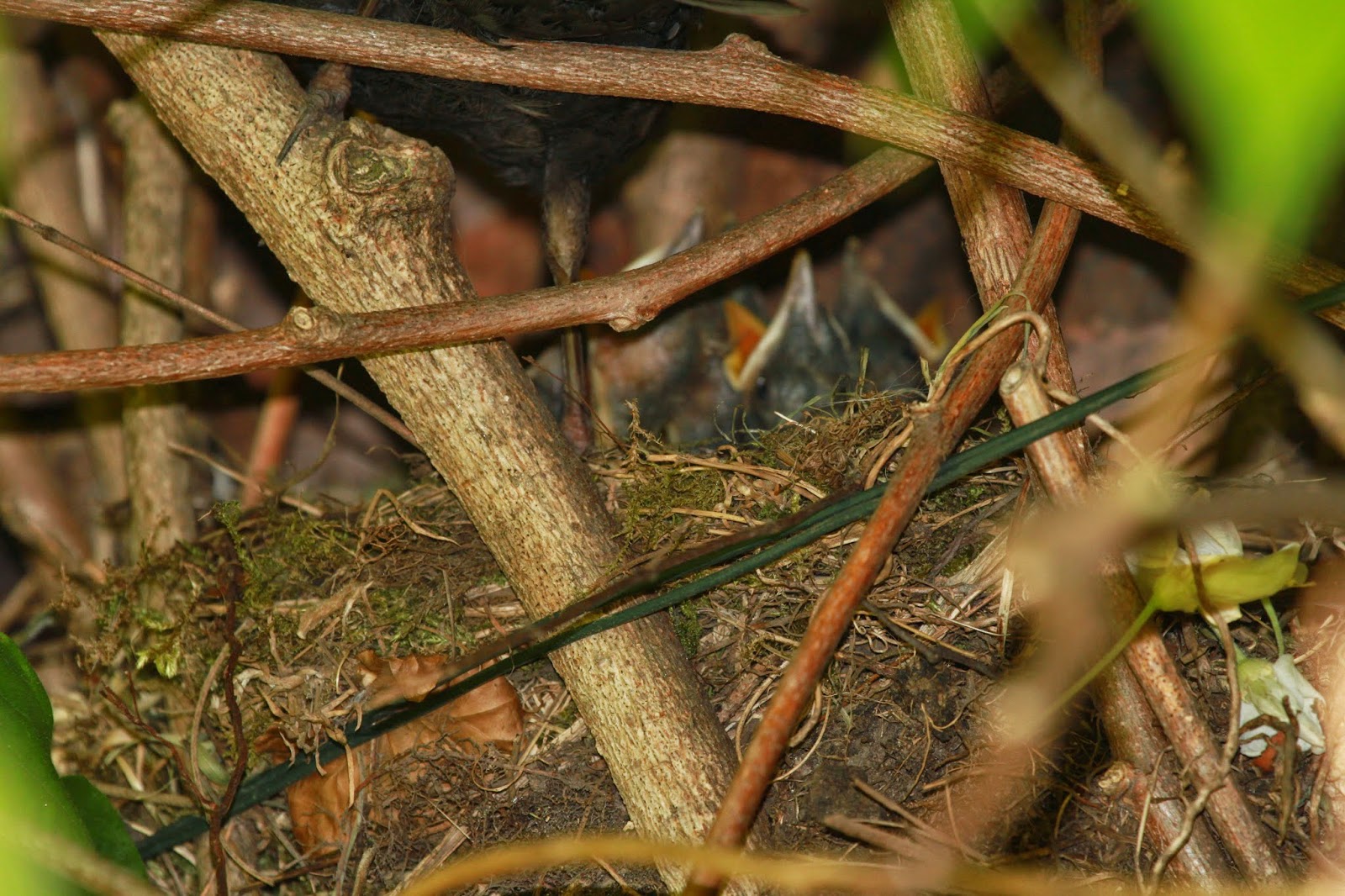 
As the chicks grew, both the male and female Blackbirds brought in food. The chicks started to fill the nest and it wouldn't be long before they fledged. 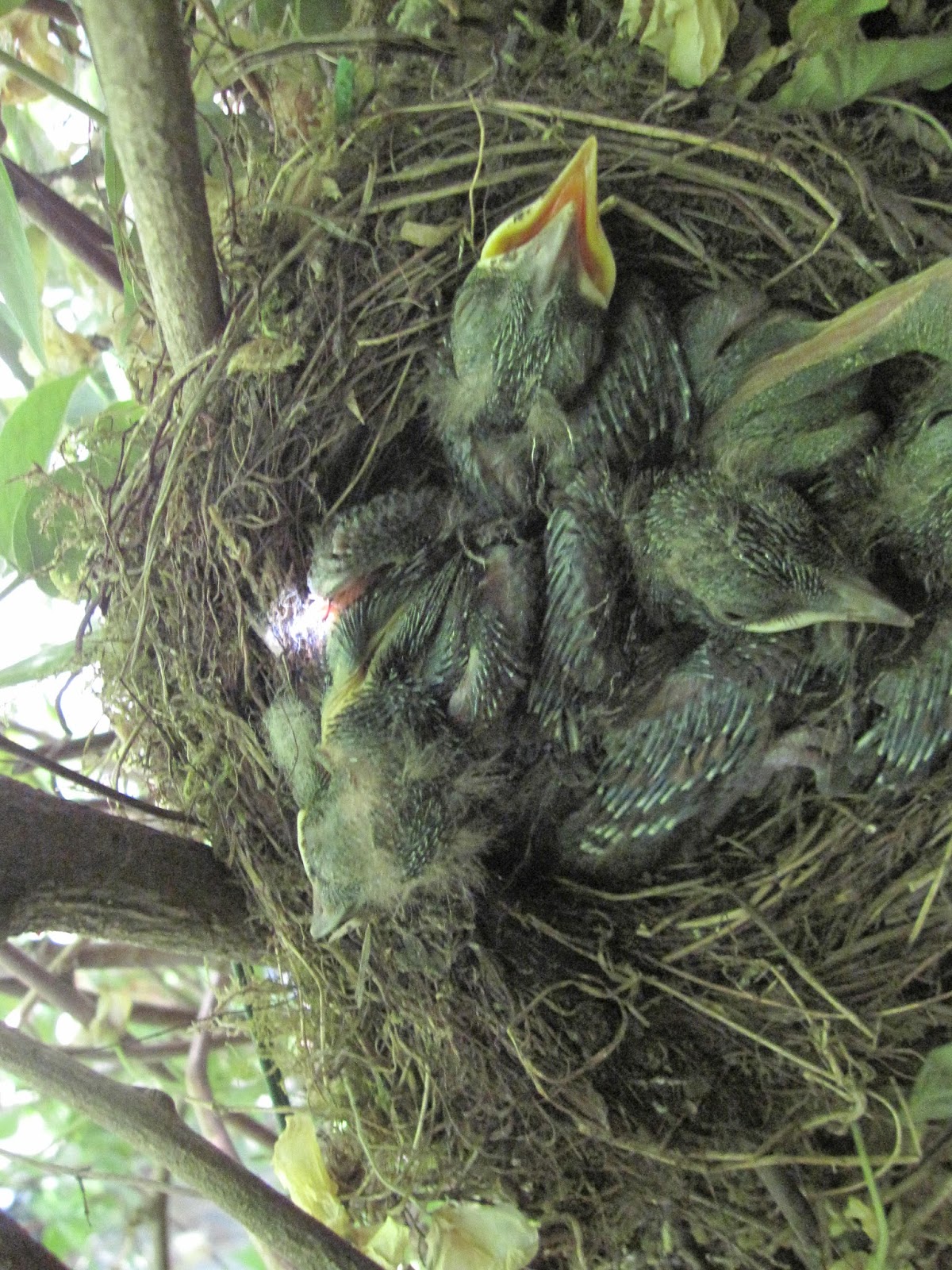 The adults were quite used to us being in the garden and seemed quite relaxed flying between the Blackthorn tree and the Wisteria. We had planted some trees and I put a few worms we dug up out for her. She was down to get them in seconds. 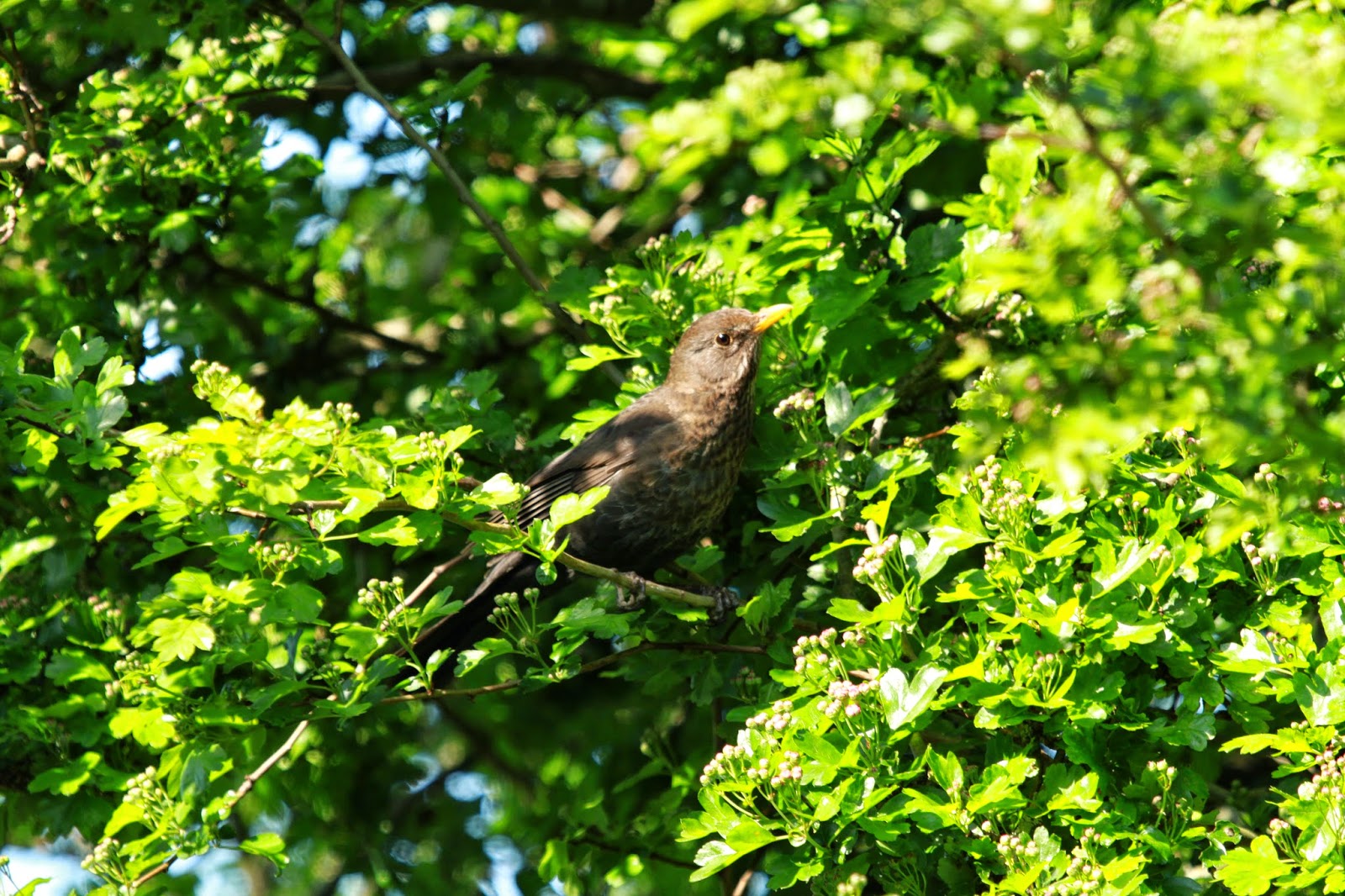 By Saturday 24th May (the day before they fledged) all five were standing high out of the nest thinking about fledging and peeping out ready for their last meals in the nest. 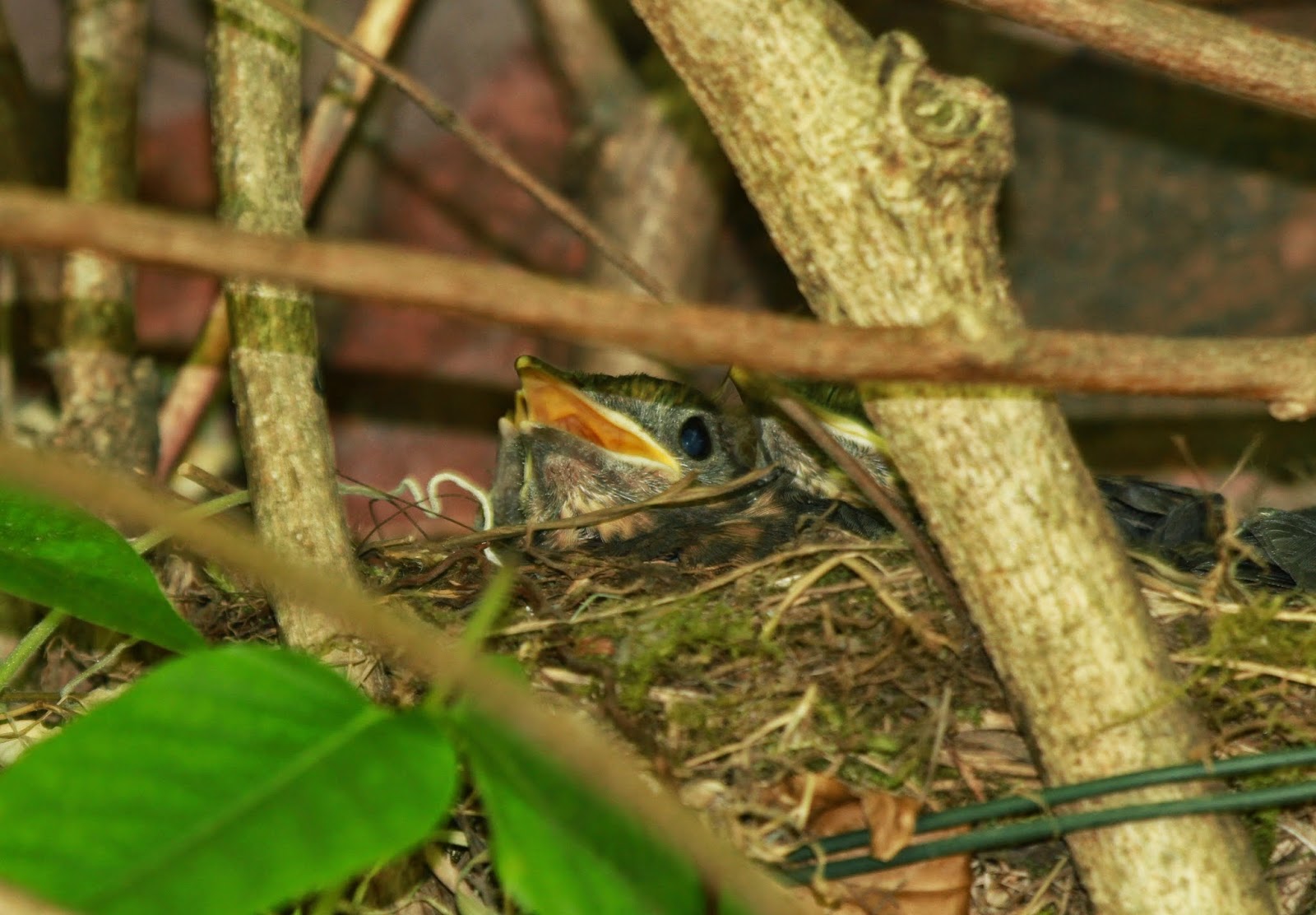 24th May - Day before fledging

Finally on Sunday 25th May they all left the nest. Four were really sensible and went into our big Leylandii hedge; however one sat in the neighbours long grass underneath their garden chairs. This worried me because it was just below a dead tree where Jackdaws and Magpie's like to gather (also prone to cats). I didn't need to worry though, the female Blackbird visited it regularly with food and the male chased the magpies away. 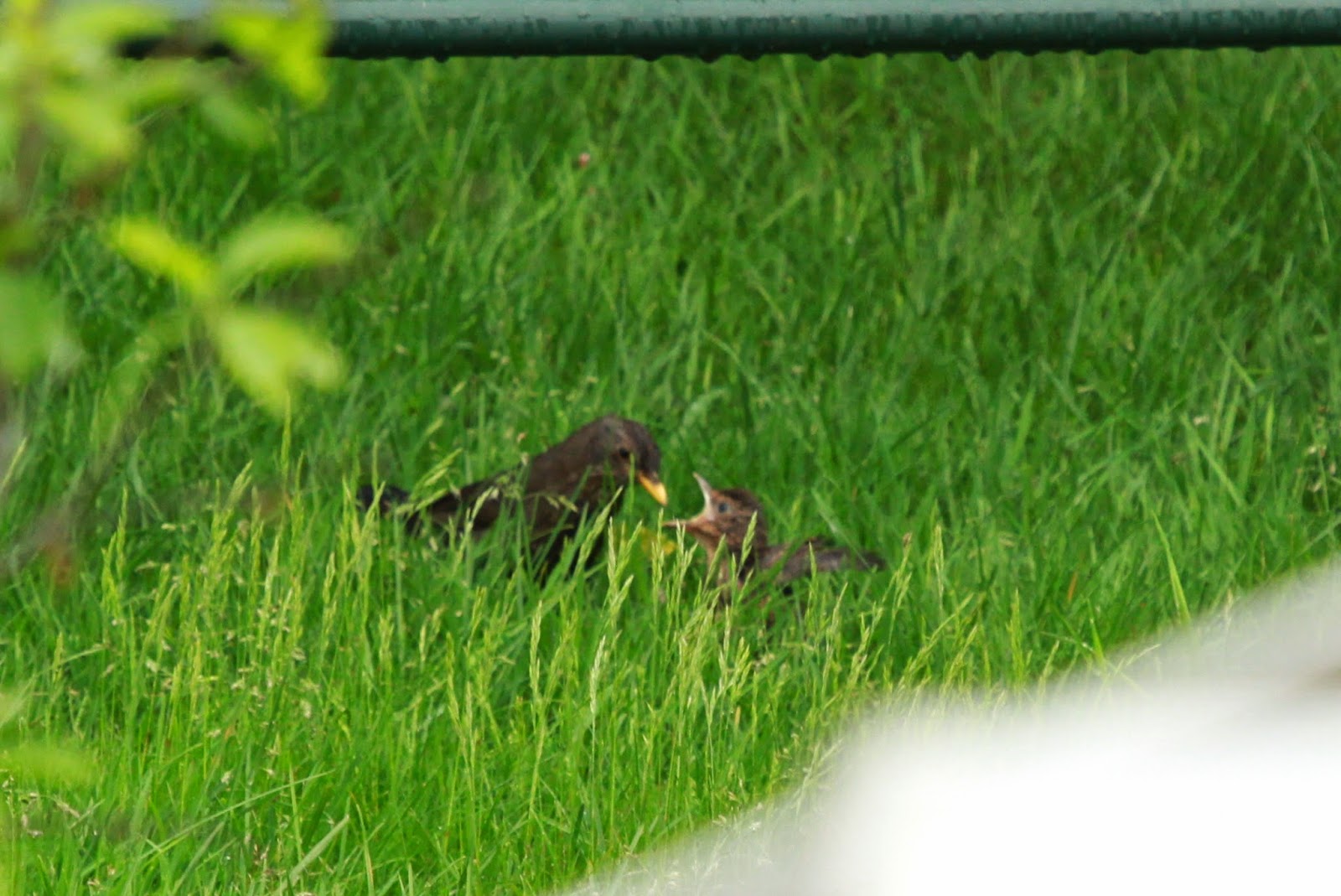 As I write this blog, all 5 fledglings are in the garden and doing really well. It has been such a great experience watching the whole process. They have had a great start in life, I wonder what the future holds for them.