I was so excited and very privileged to be out ringing some very special birds on Saturday. I had been invited by Kelvin Jones from BTO Cymru last year (at the Bird Fair) to take part in ringing Choughs. I have waited ages for this day to come and it didn't disappoint one bit. I have seen Choughs over at South Stack several times and down in Cornwall when I was on holiday. So to have this opportunity to get up close was always going to be special.

Me and my dad set off early as we knew the traffic could  be bad and we wanted to check out a small Nature Reserve called Spinney on the way that we hadn't been to before.  It was great there. It looks out over the estuary which was full of Little Egrets and we also spotted the odd Red Breasted Merganser. As we were watching a pair of Great Crested Grebes were being mobbed by a single Oyster Catcher. But then the rain kicked in so we moved on to where we were supposed to be meeting Kelvin.

As we arrived early we decided to have lunch at a cafe with a great view over a Lake, which this time had Goosanders on it. It was a brilliant start to the day, but I had a feeling that it could only to get better.

Kelvin turned up and explained to us the plan for the day and where we were heading .We were also meeting Adrienne Stratford. Adrienne is amazing and is so knowledgeable about Choughs. She has been studying them for a very, very long time and has been able to understand more about these special birds - how and where they breed, their movements, their social lives etc. Colour ringing the Choughs has been an essential tool  in studying these birds. Not only that, she does all the rock climbing as well! Her dedication to Choughs was so Inspiring. 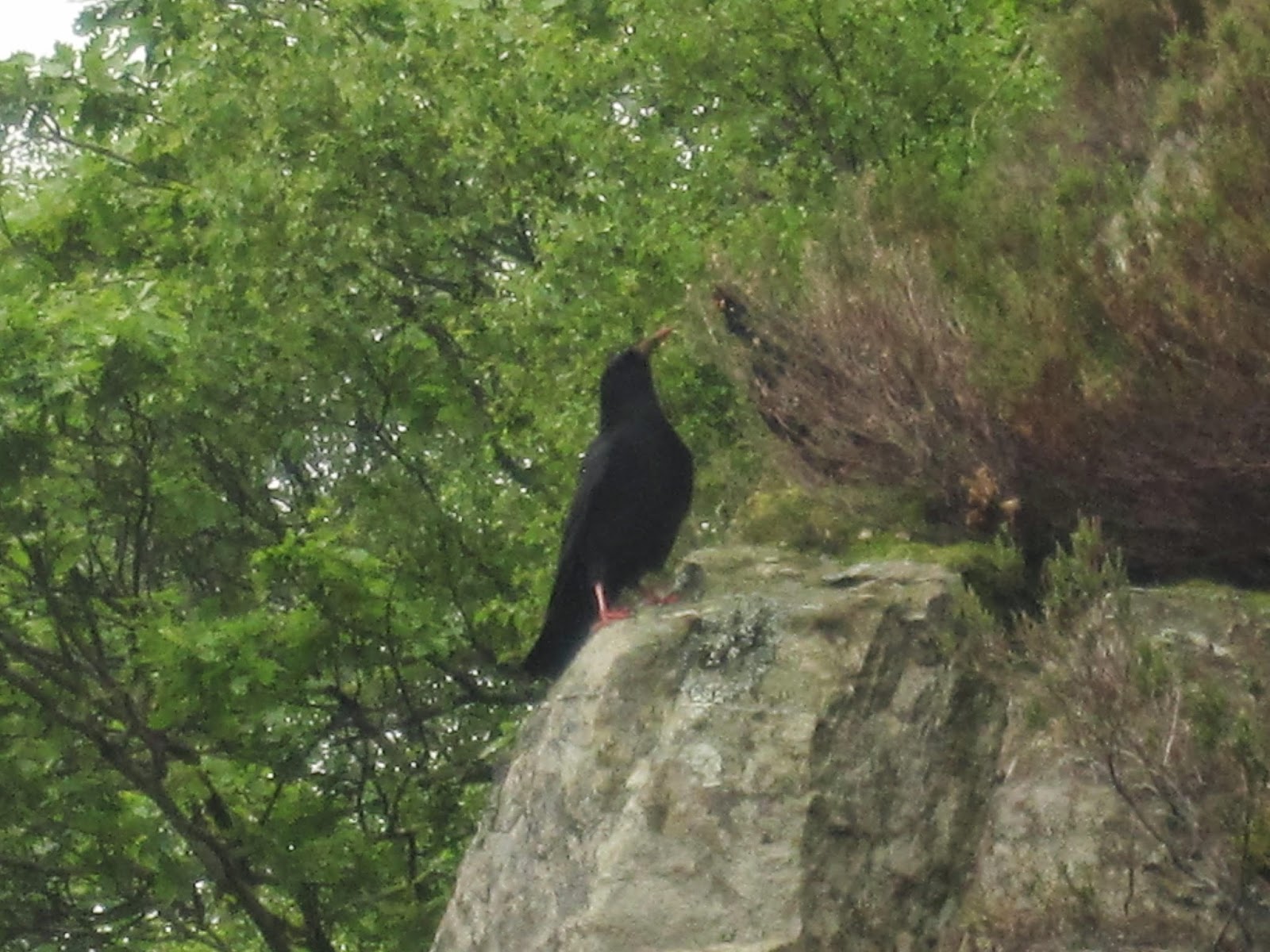 Before we started the journey up the mountain we had to unload the ladder and get out all the ringing equipment into a bag. We then set off up the cliffs (which was quite a trek).  As we set off we were treated to a pair of Wheatears foraging for food. However as we continued further up, the adult Choughs gave me a hint of where the cave we were heading towards was. 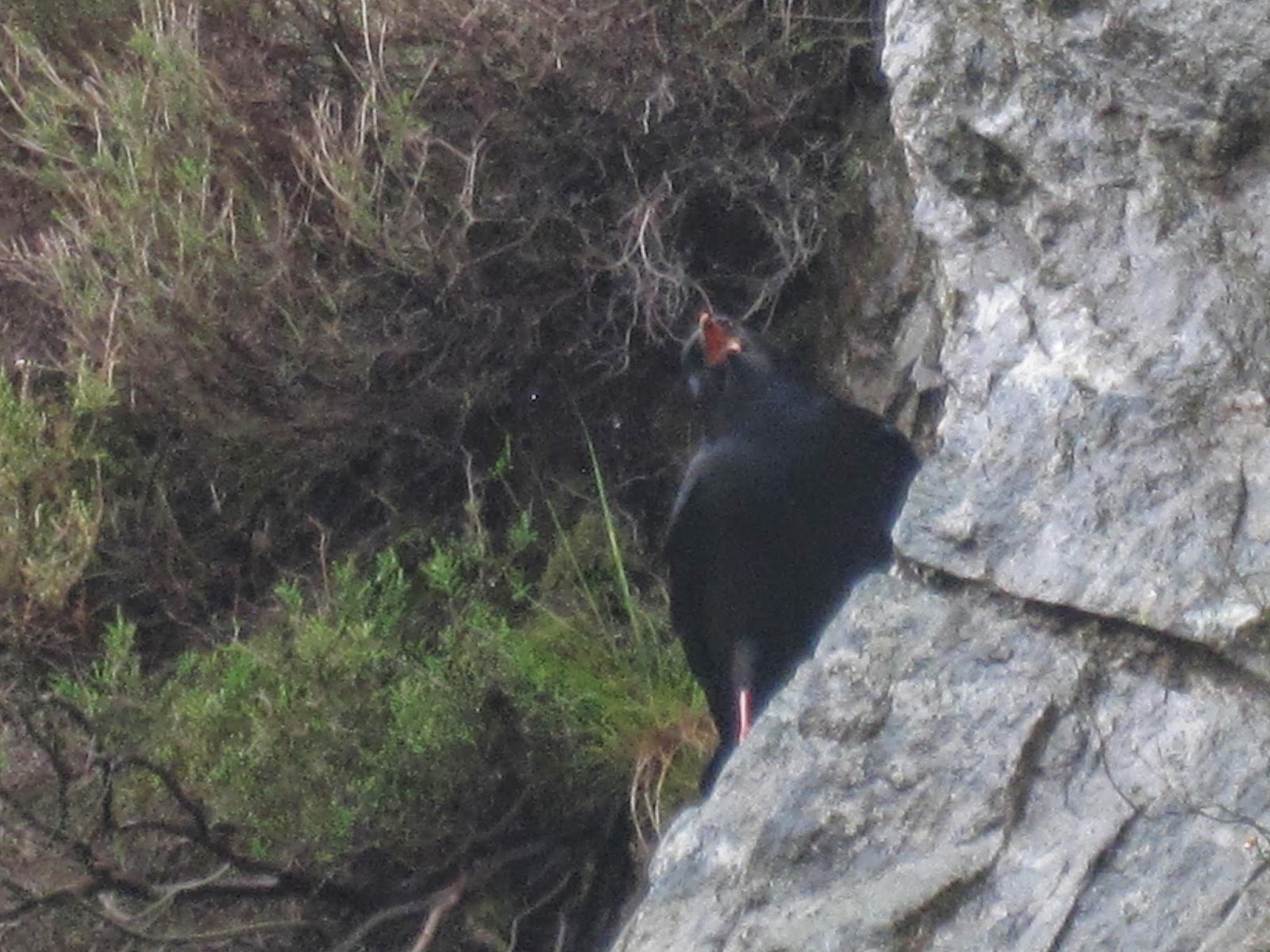 After the trek up the cliff we entered the mouth of the cave. As you can see in the picture below, Adrienne had to use some good climbing skills to get to the nest, as the walls were just plain slimy and the cave was full of water. We ensured the ladder was firm and safe and that the rope would not come undone. After Adrienne came back with the Chough chicks, she explained everything I needed to do, and then it was my turn to get involved. 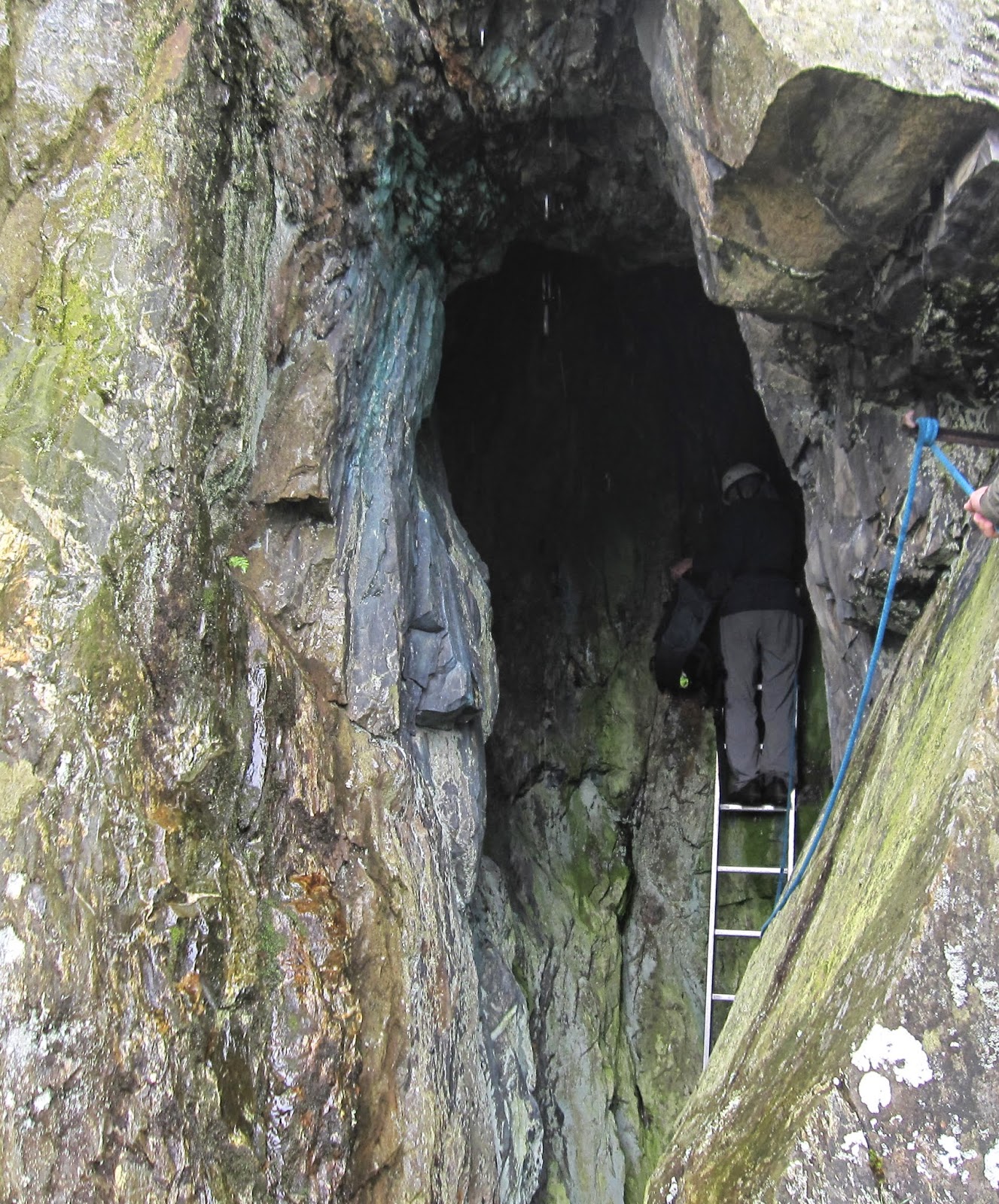 I have to say the young birds were quite big (at least twice the size of a Blackbird) and a bit wriggly when held, so I let it sit flat on my lap which made it easier for me and more comfortable for the bird. 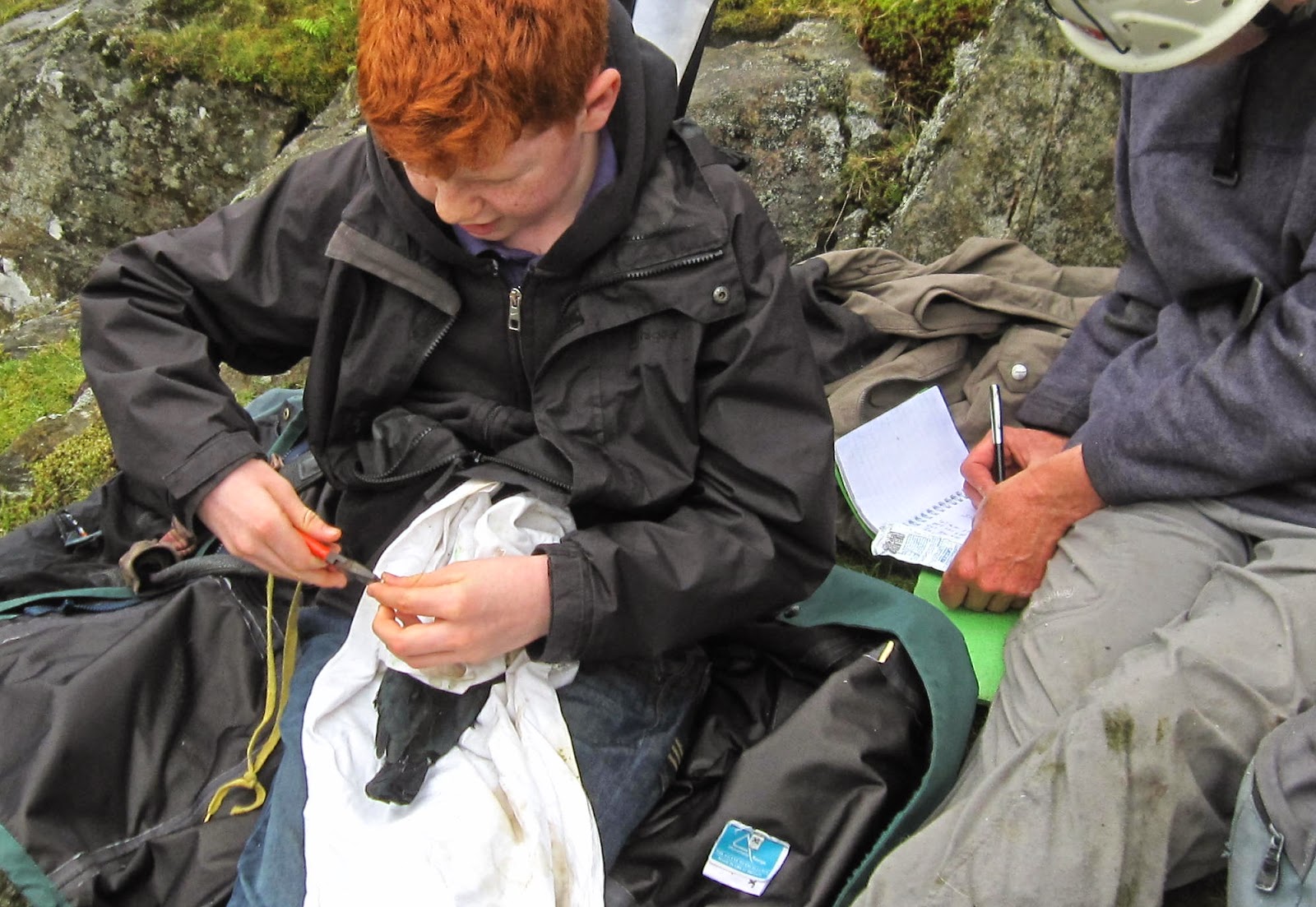 After the ringing part was done it was time to do all the other processing i.e. weighing and measuring (the wing and the tarsus). All this data goes into the Chough Project which is really important. 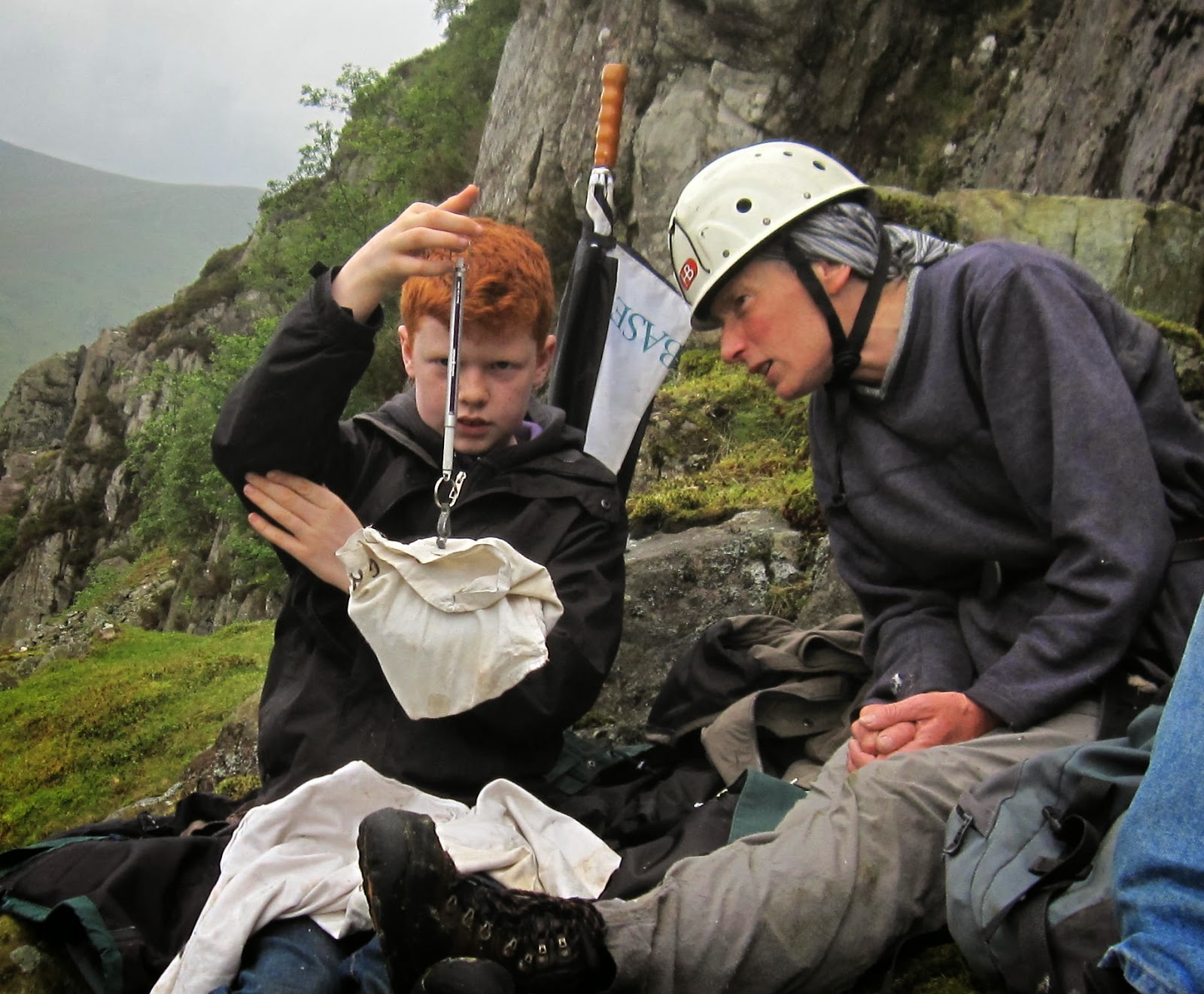 In this nest we found two chicks. Whilst I went on to ring my second one, Adrienne went to colour ring the first. That was amazing to see how she  uses the colour coded rings for recording data. Using codes and colour sequences on the rings helps tell you where the birds have come from if you see them again. You can then of course look back through the data and see how old they are etc. If you are out and about and see a colour ringed Chough please pass the information on to The British Trust for Ornithology. 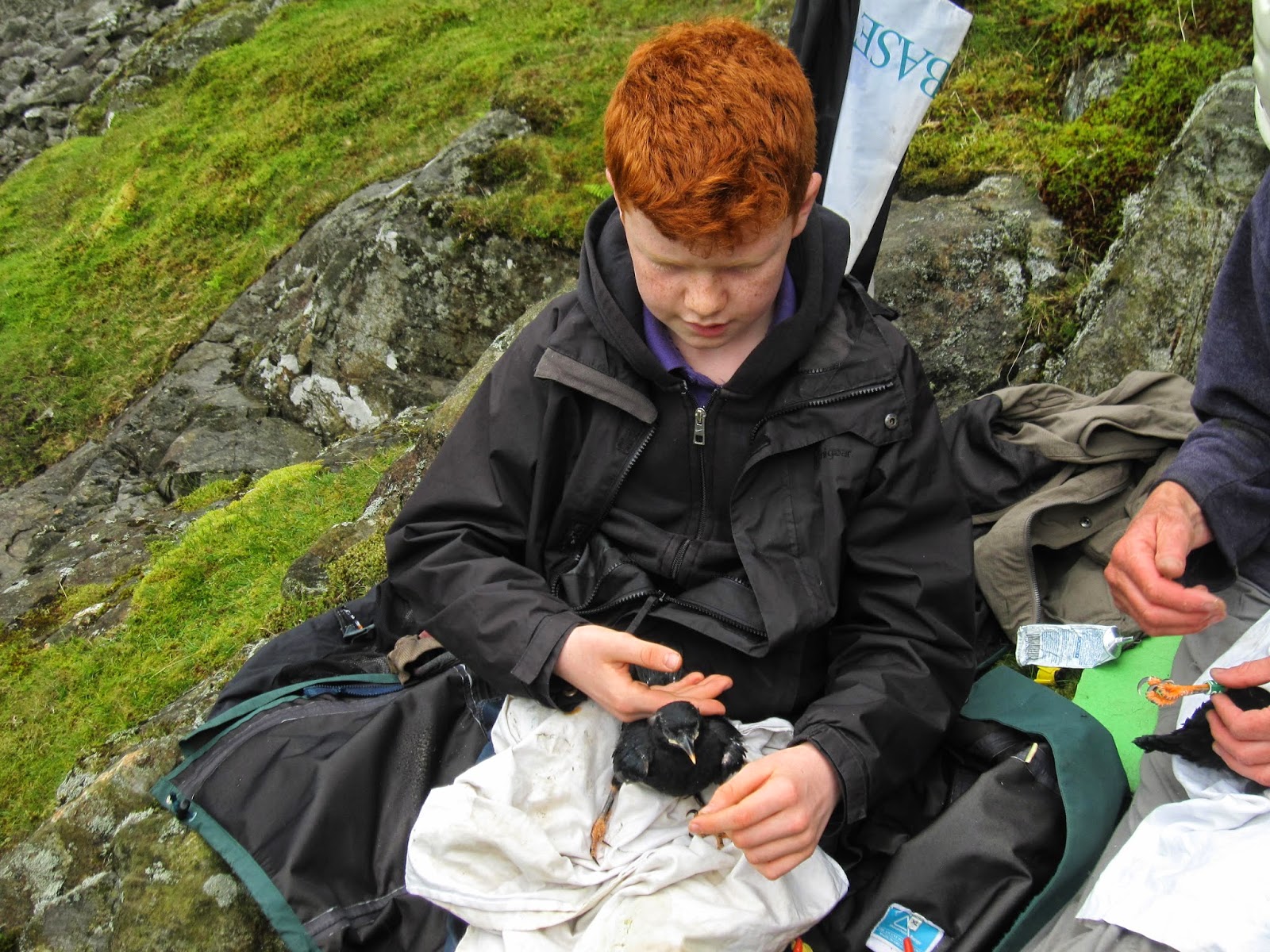 Wow, a very lucky me ringing a Chough. 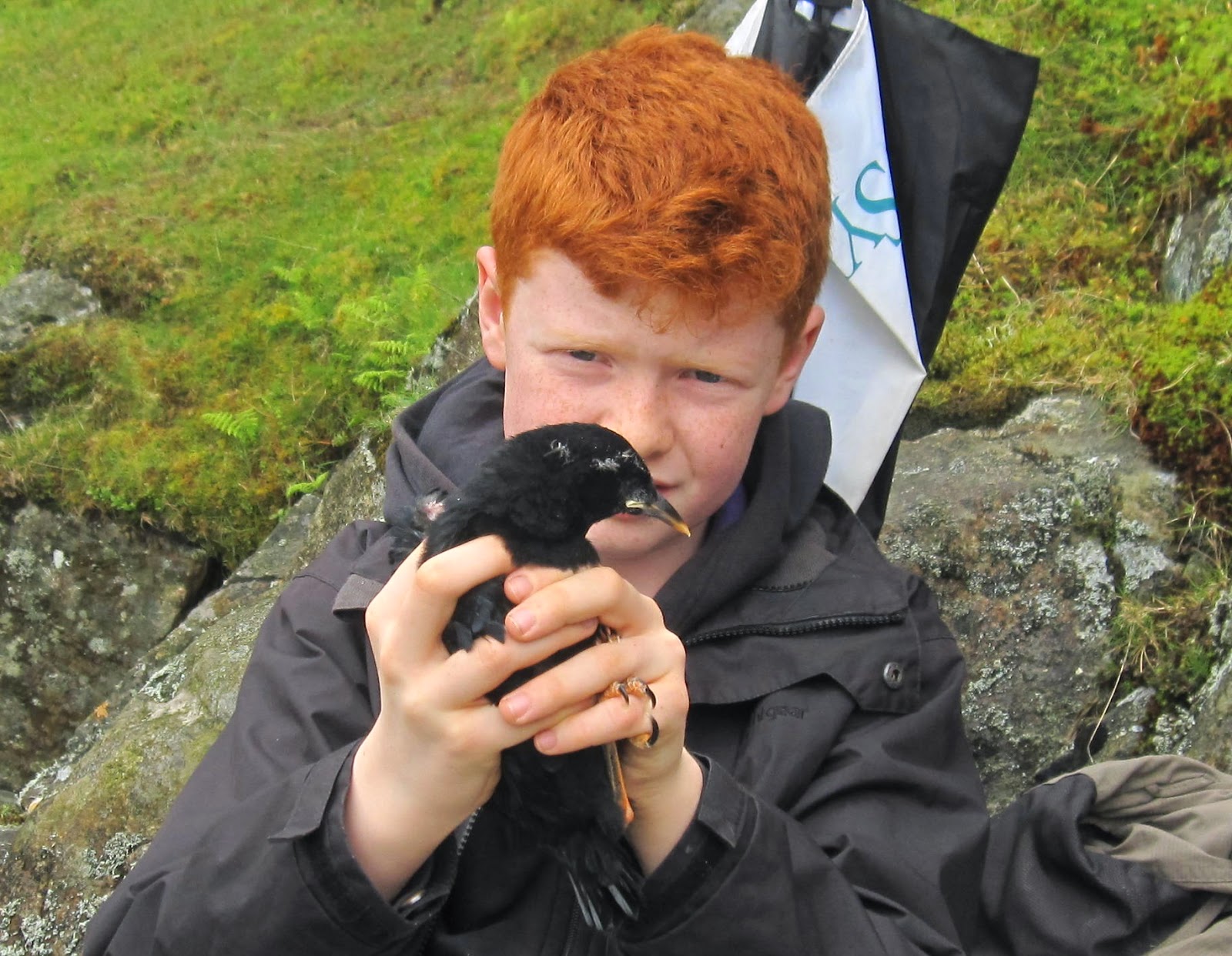 There was some deep sadness attached to the day though - whilst visiting our second nest site later in the day. Adrienne climbed up to the nest to get the chicks for ringing and they had gone- which was immediately very worrying and puzzling.  Then we spotted them dead on the floor - how had they got there and how had they died ? Adrienne suspected foul play and it looked like the birds had been taken out of the nest and crushed. Who would do such an evil thing; that got me really angry.

To finish my blog post I want to end on a happy note and whilst I was ringing Choughs, I also saw my first ever Cuckoo of the year and in my life! An absolutely brilliant day.

Thank you so much to Kelvin and Adrienne for letting me join them today and for explaining so much about the project to me. I wonder what lies ahead for the two chicks I ringed today - good luck to them, they will probably need it.