Hen Harriers & Divers on the Dee!

As you will see in this post, it has been a very busy weekend, but the very best kind of weekend too.

Like I said in the lines above, this weekend was packed full of activities, the first of which, I just had to participate in, it was indeed the Big Garden Birdwatch, which I did on Saturday. I had got all the feeders filled up the previous day, hoping to attract a couple more species.

We stuck to the one hour time limit, between 9:15 and 10:15, when the birds are still very active in for the garden. 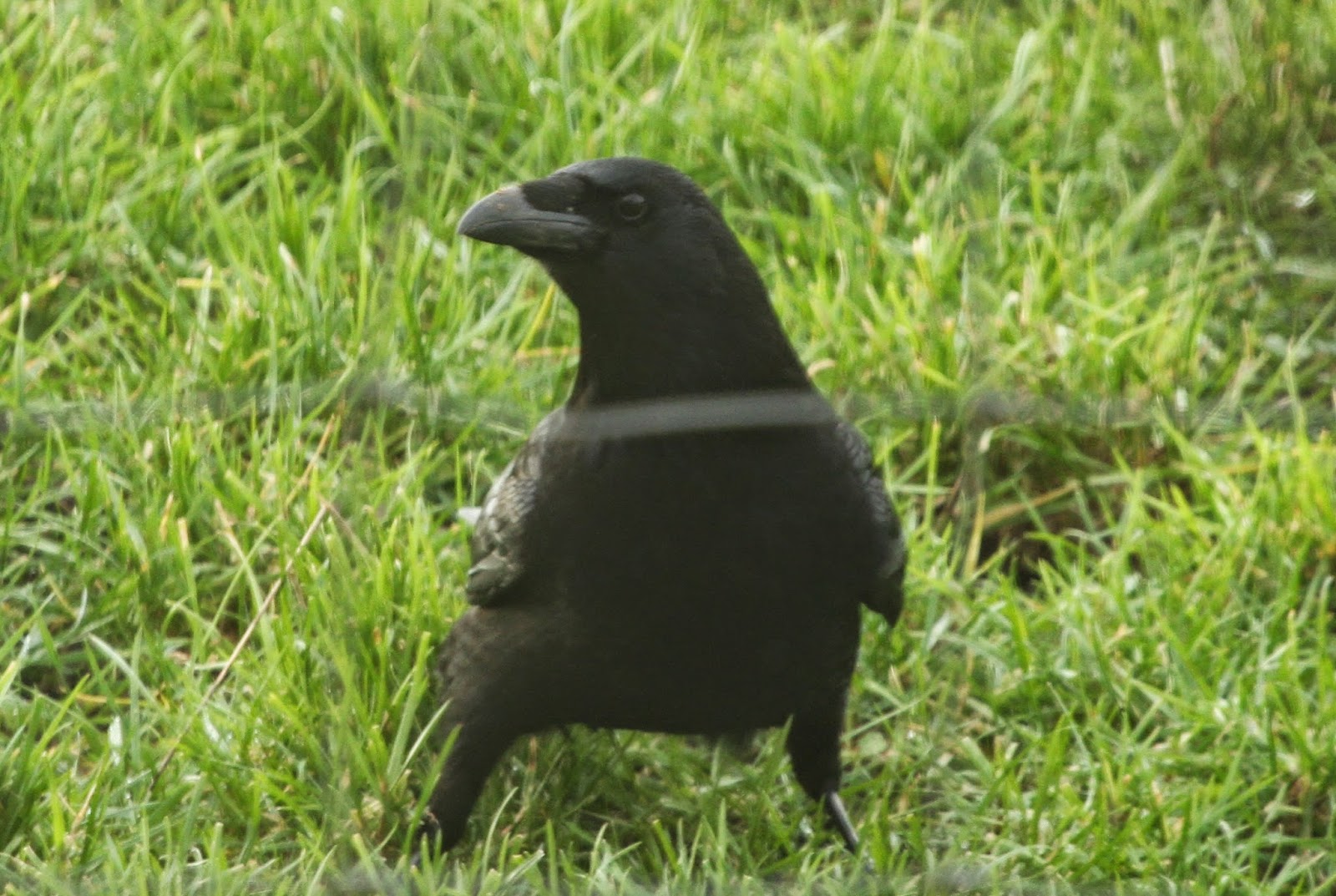 The session started off pretty quietly with nothing apart from a couple of tit species and the resident House Sparrows. It remained slow for the remainder of the watch, however we managed to pick up a couple of nice species for the garden, including a Carrion Crow and a stunning little Wren. Most of the activity picked up in the last ten minutes and we managed to finished on a comfortable 15 species. 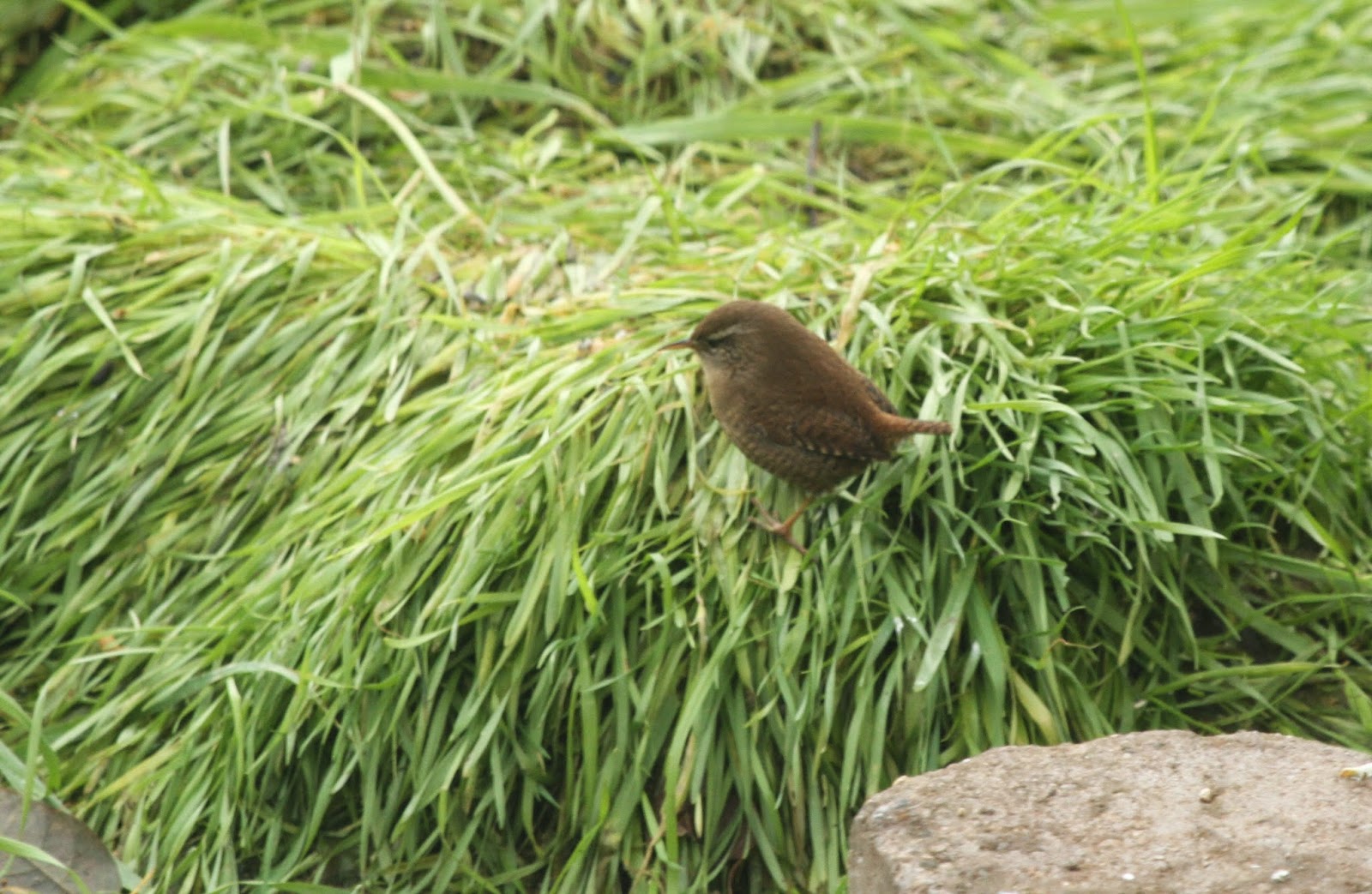 The missing regulars were Magpies, Pied Wagtail and our Jay.  How did you all do on your Garden Birdwatch count?

As the day was on a reasonably tight schedule, we were off to Frodsham Marsh next for the WeBS count at high tide.  As soon as we arrived at Frodsham Marsh and parked up. I was eager as ever to get out and watch the birds to see what was on No6 Tank. I first had a quick scan over the newly developed mitigation tank, located on one of the first fields alongside the track, just outside No.6 tank. The mitigation tank has been built as part of the planning conditions for the wind farm that will be put into action soon.  It is early days for this scrape so we will have to see how it does.

The Mitigation tank didn't have too much to offer on this day, except a solitary Redshank, and about 80 Lapwing.

As usual for the WeBS count, you arrive an hour before high tide, and stay an hour after. The expected tide was a respectable 9.9 meter one which we were hoping would push more birds off the estuary and on to the tank. Sadly we didn't see the massive flocks we were hoping for, but the mix of species was good including 100 Dunlin, 300 Grey Plover, Teal, Mallard, Redshank, Shoveler, Cormorant, Lapwing and a flock of about 50 Pied Wagtail feeding on the mud.

Out of the corner of my eye, quartering over the reed bed, I located a stunning Marsh Harrier, gliding gloriously in the sun and bringing out the perfect contrast of colors. The Marsh Harrier stuck around for quite a while before disappearing over No4 tank. 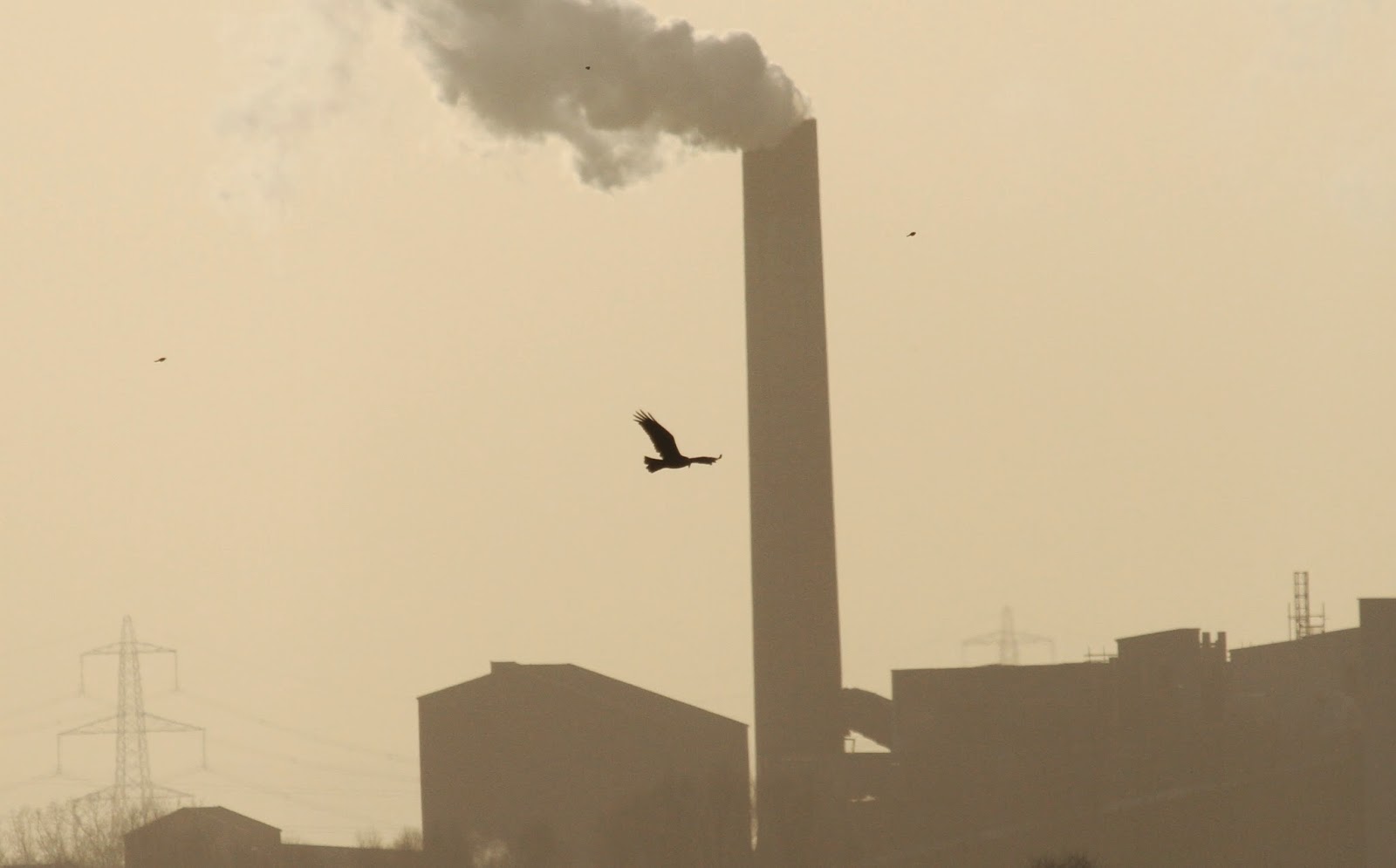 Due to it being quite a high tide, Frodsham Marsh had attracted a couple of other birders, which we had a good chat to including a nice lady called Mary. Her grandfather was the first person to farm sheep on the marsh.

I noticed a sudden flicker of movement, so I looked up and noticed sat up on a reed was a male Stonechat (and an absolute stunner it was too) occasionally dropping down then returning to it's previous perch or one close by, gradually making it's way down the grass. I thought Peter Woodruff would really like to be watching them. 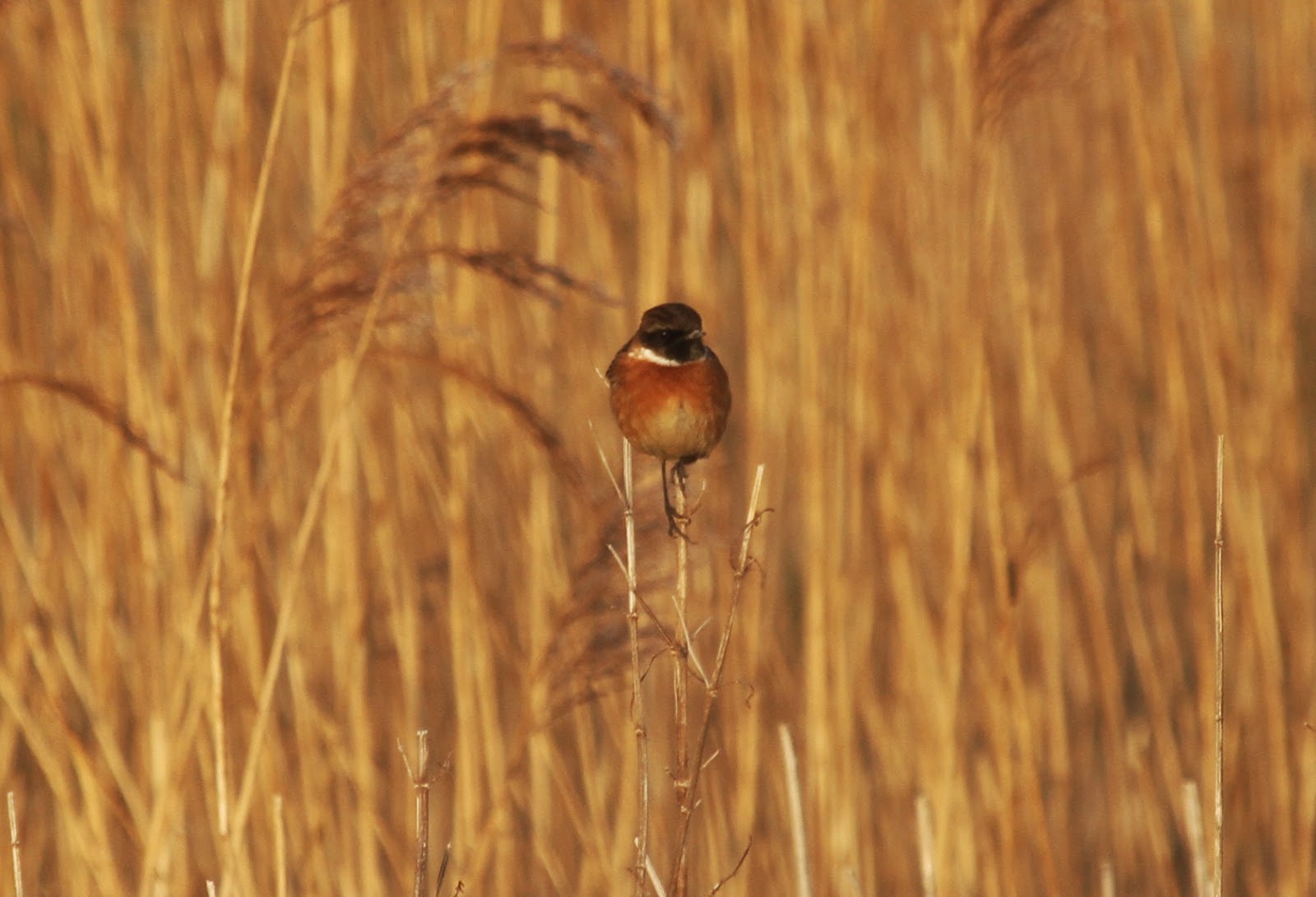 Within minutes, a female came to join it. I had seen one earlier in the session so I presume it is the same one, as it was in the same stretch of grassland just a little bit further up alongside the track. We watched these birds for a good ten or so minutes before they both took flight somewhere further along the track. 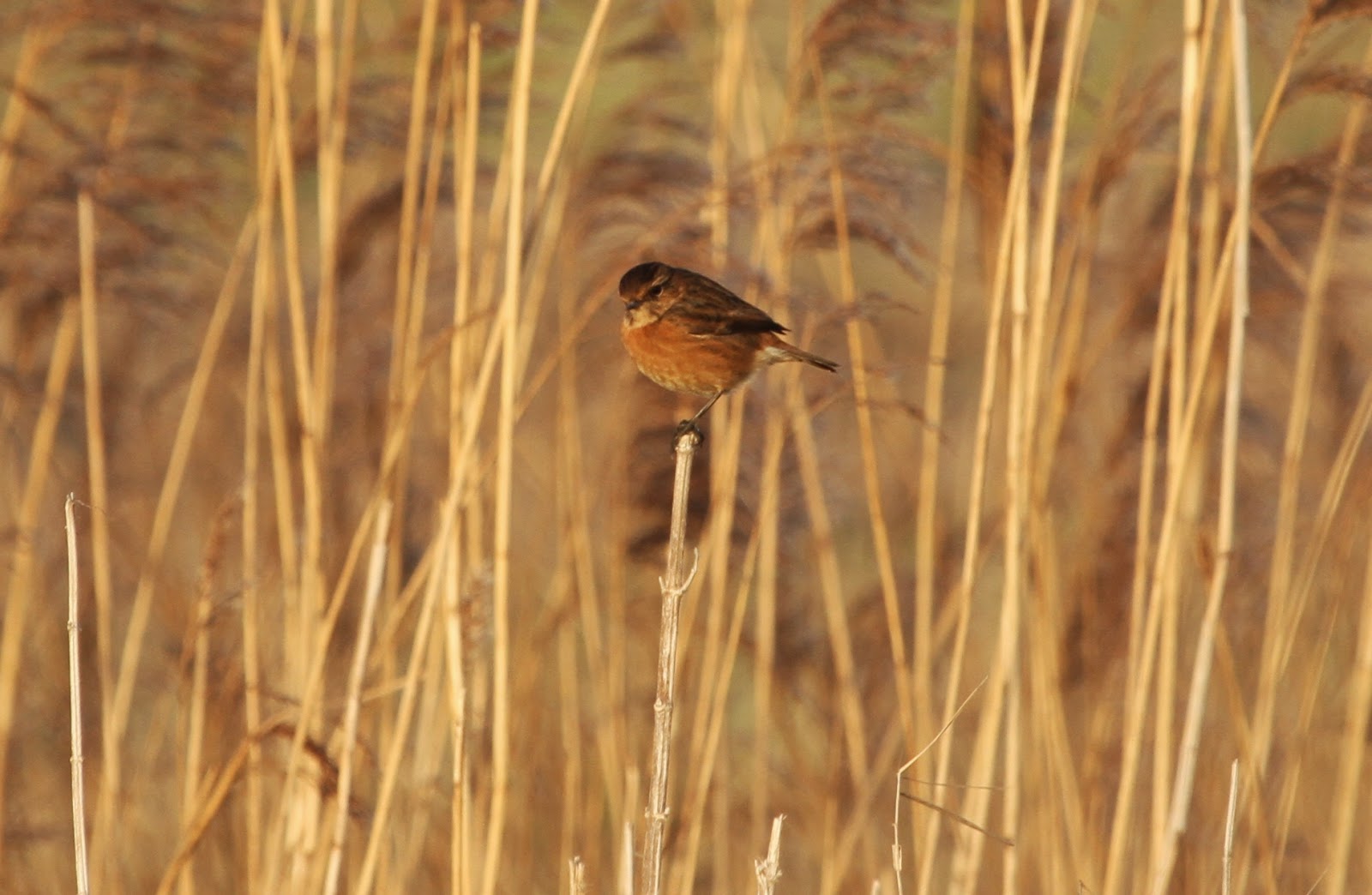 Our WeBS count numbers will all be reported to the BTO along with the counts from across the country.

After a brilliant day on Saturday, I was hoping that Sunday would be just as good. I was out ringing first thing for only the second time this year due to the Winter weather.  Sunday's session was a absolute delight, being out and about was one thing, but also catching some stunning birds, despite the low numbers, was just brilliant.

The main session started at about 6:15am (setting up the nets and all of that kind of stuff). Throughout the session it stayed consistently mild for the time of year. The highlights of the session were a re-trap Willow Tit, a Redwing, and some Yellowhammer (male and female).

In early Spring, when winds blow chilly cold,
The yellowhammer, trailling grass, will come
To fix a place and choose an early home,
With yellow breast and head of solid gold
extract from a poem by John Clare

So overall despite not catching too many birds, it was a rather successful session and it's always great to catch up with the other trainees; Sophie, Dan and Kev. However, those Yellowhammer were the main stars of the session. 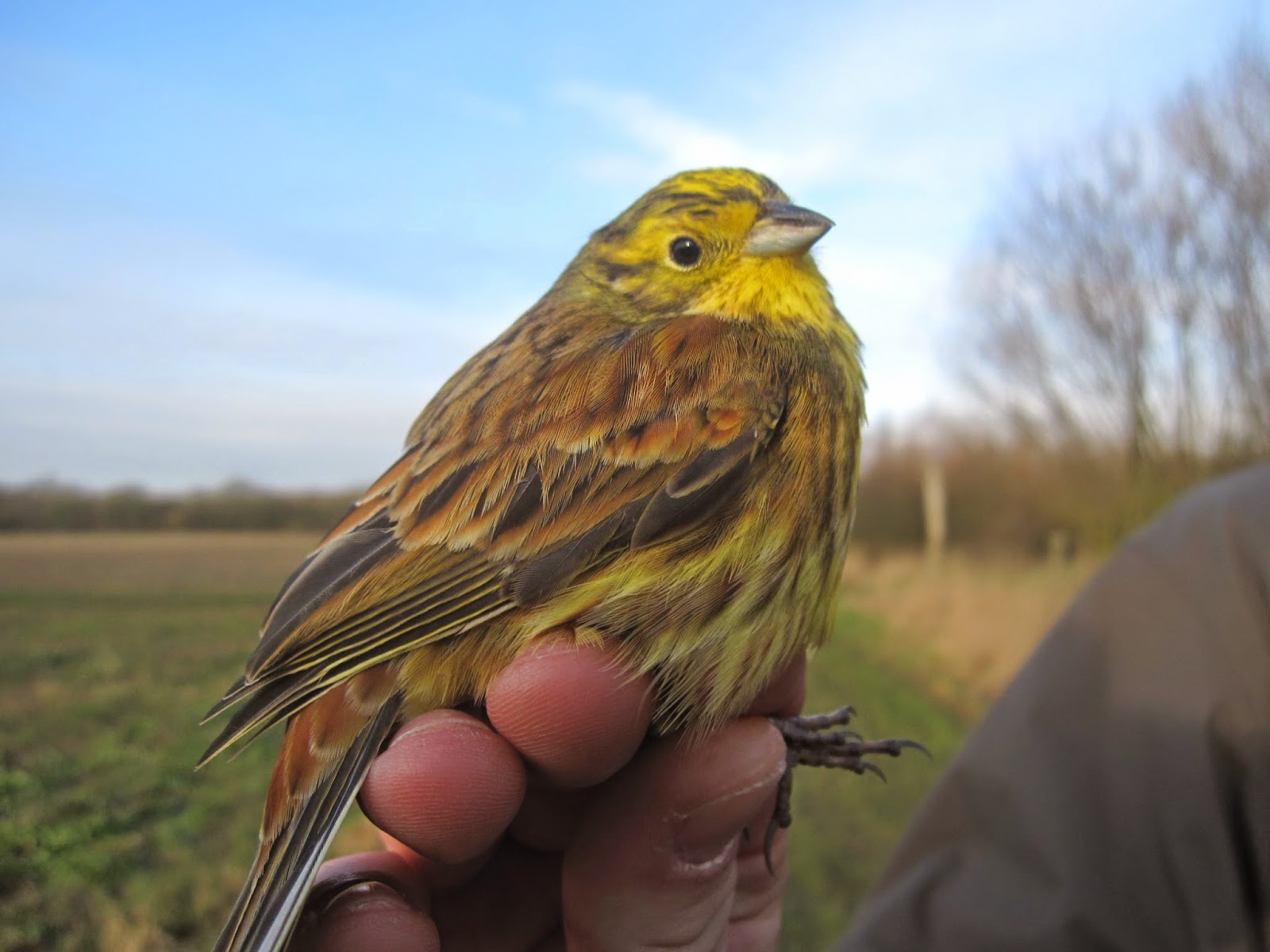 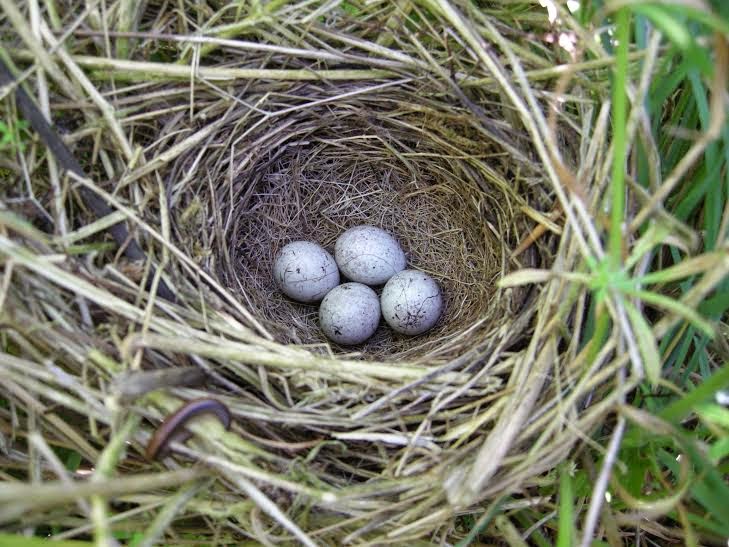 RSPB Skydancers on the Dee Volunteering

Sunday was another tight scheduled day, as the next stop was for my volunteering for the RSPB at Parkgate on the Wirral (Dee Estuary) with Dan Trotman. It was an absolute perfect day to be out; the sun was shining, a nice comfortable temperature, barely any wind, and of course no haze over the marsh. The  best conditions you could ask for. We were there to raise awareness about the illegal persecution and declines of the Hen Harrier. A great place to do it as several Hen Harriers spend the Winter on the Dee Estuary. We were trying to spot a Hen Harrier for people to see for themselves.

As it was quite a nice winters day, there were lots of people walking along the front and being attracted by the big green RSPB gazebo. Before you could say "Hen Harriers" I was already off interacting with people and informing them about the situation of Hen Harriers. It is so good to engage with so many different types of people and show them things that they didn't even realise were there. It was great to see Ollie who I had spoken to on twitter. He came all the from Yorkshire to see the Dee Estuary Hen Harriers. 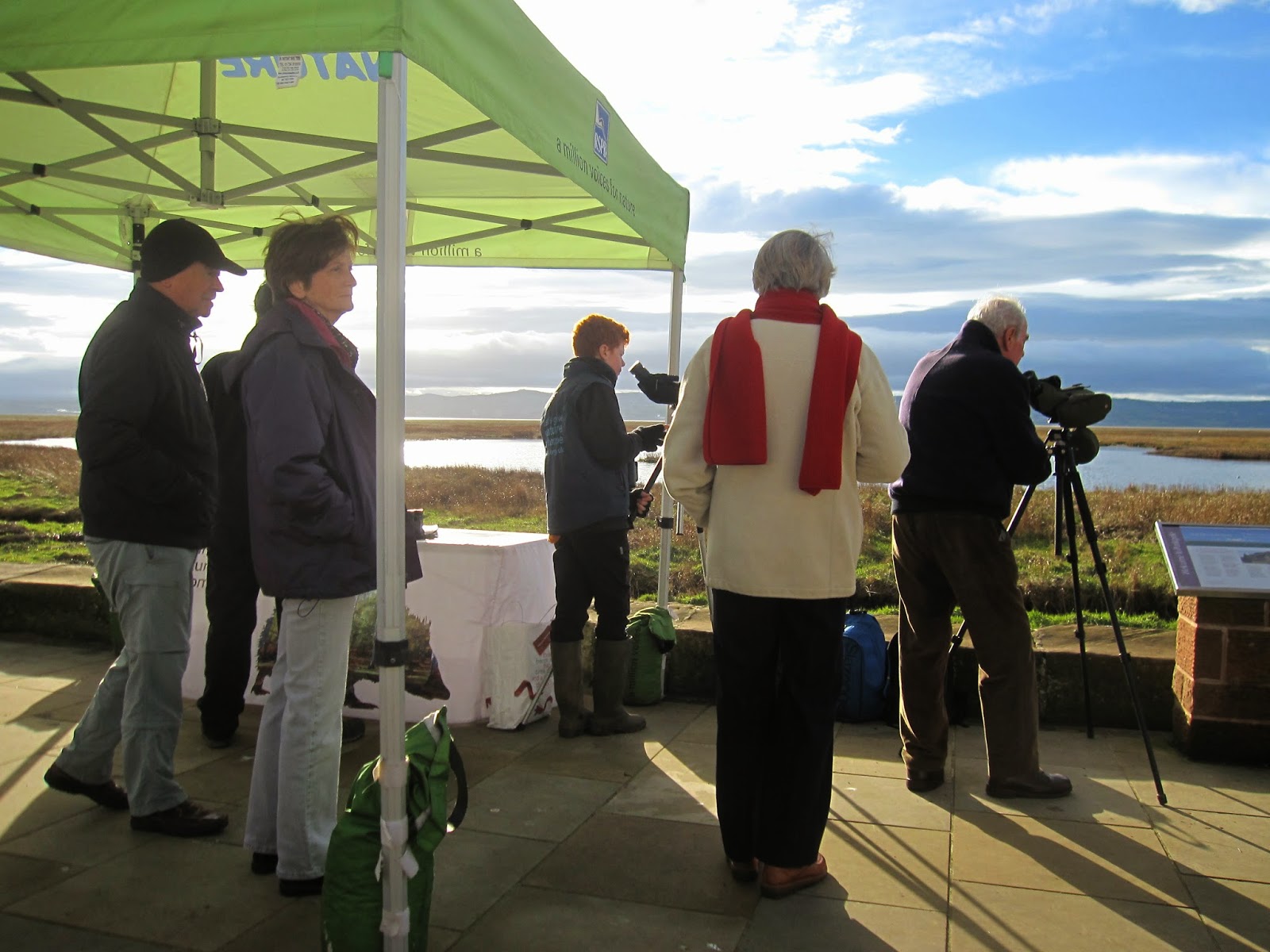 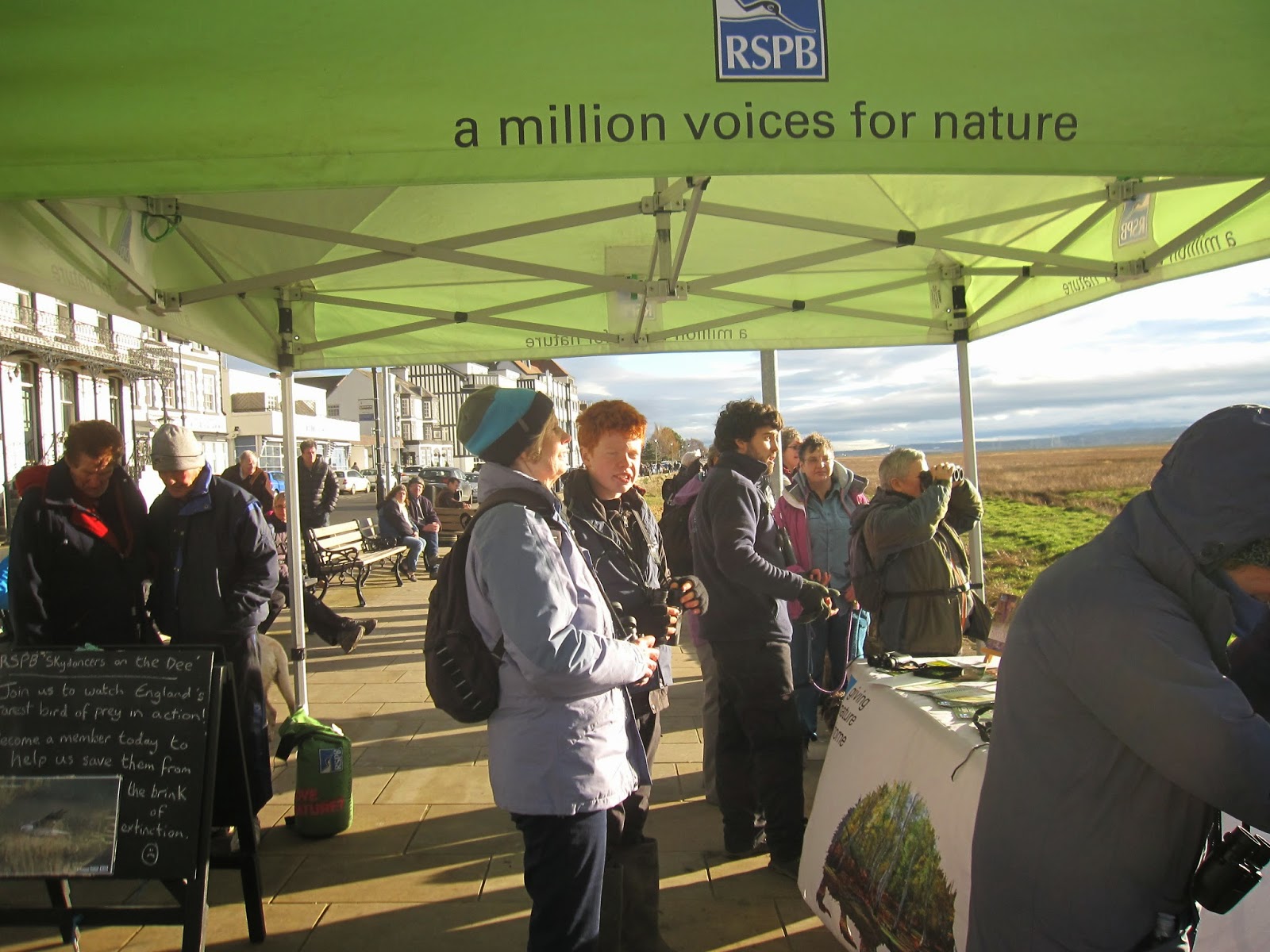 A person came up to us and described a strange bird they had seen in the tidal channel which separates us from the marsh. From the description we narrowed it down to a Red Throated Diver, but didn't really think it could be, so of course we just had to go and have a look. And there it was.

Luckily grey and green stand out against one another, and after about five minutes of searching I found it, lying down against the grass on the bank of the little ditch. 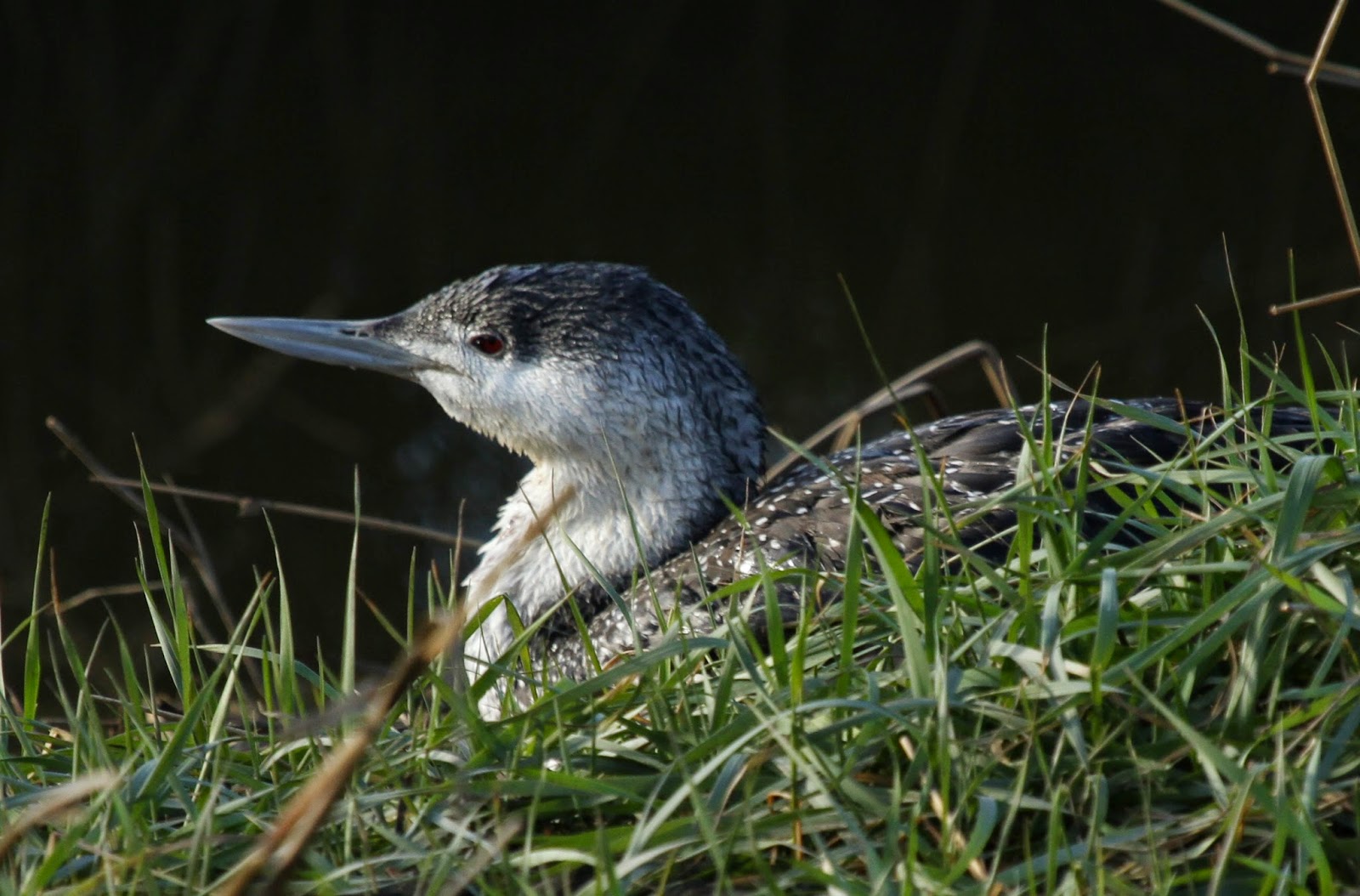 As you can guess, getting that close to a Red Throated Diver is quite a scarce moment, as they are usually miles out at sea, and you can usually just make them out with a strong scope. So the clues are all there. This bird clearly wasn't very well and maybe got carried in on the high tide and is now stranded. A lot of people were saying it was a great spot, but I did feel ever so sorry for the bird. 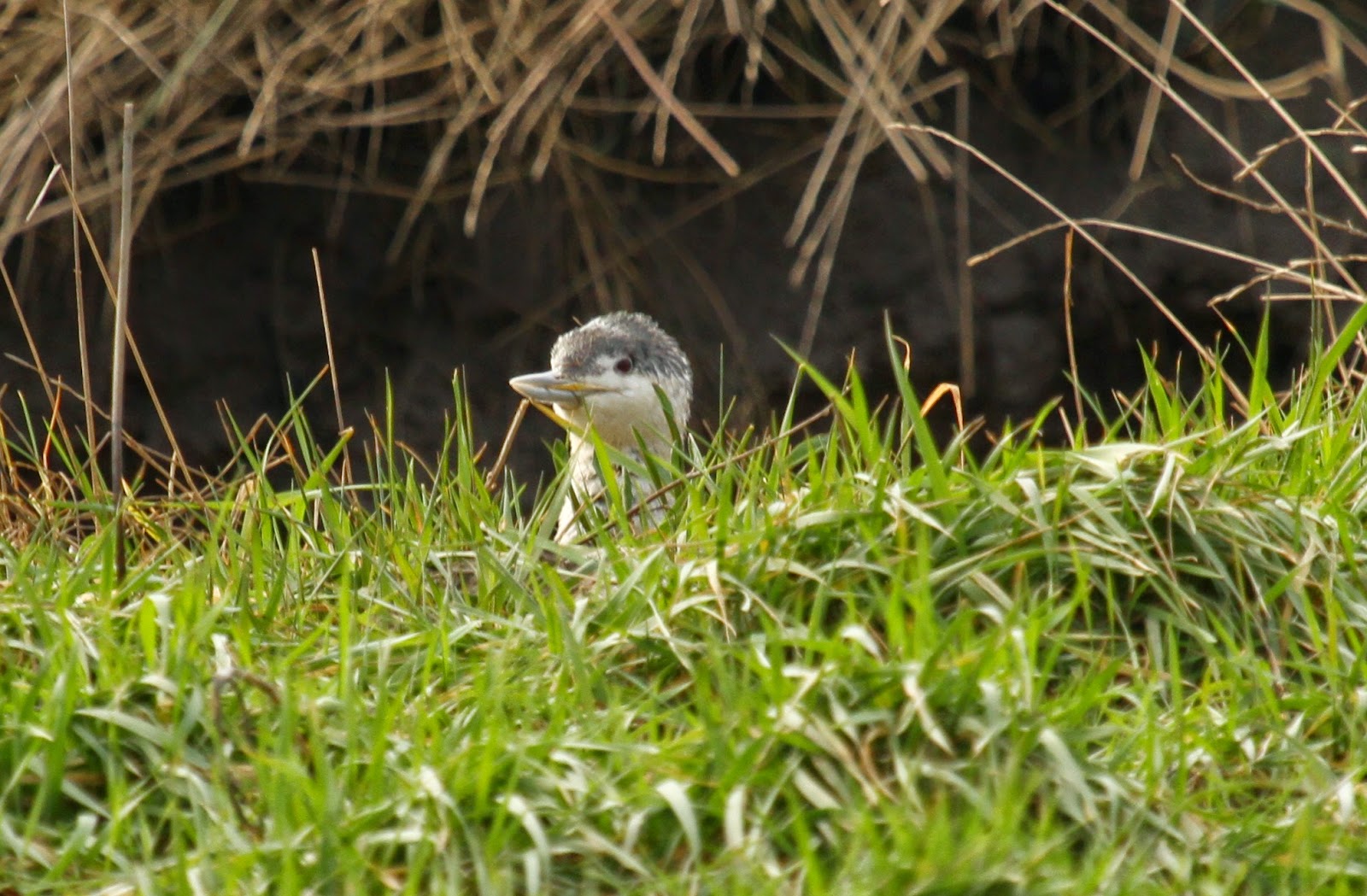 I was on a role spotting birds and chatting to people and we really did get some stunning birds (all of which got entered on to the BTO's Birdtrack). The light and everything was absolutely brilliant, and with the high tide, birds were being pushed closer towards us and the wall. We picked out Black Tailed Godwits, Redshank, a Great White Egret, loads of Little Egret  and of course thousands of Lapwing.

Every time the Lapwing lifted, I would be scanning, desperate to see a bird of prey. And the main bird we were looking for out on the marsh was the Hen Harrier. Suddenly, after all the confusion, you would see a Hen Harrier cruising through the distressed birds. All of the Hen Harriers we saw were ring tails, hunting effortlessly in the Winter sun.

Whilst watching Hen Harriers, we saw one actually take down a Lapwing in flight. It is one of those spectacular moments that you never forget. 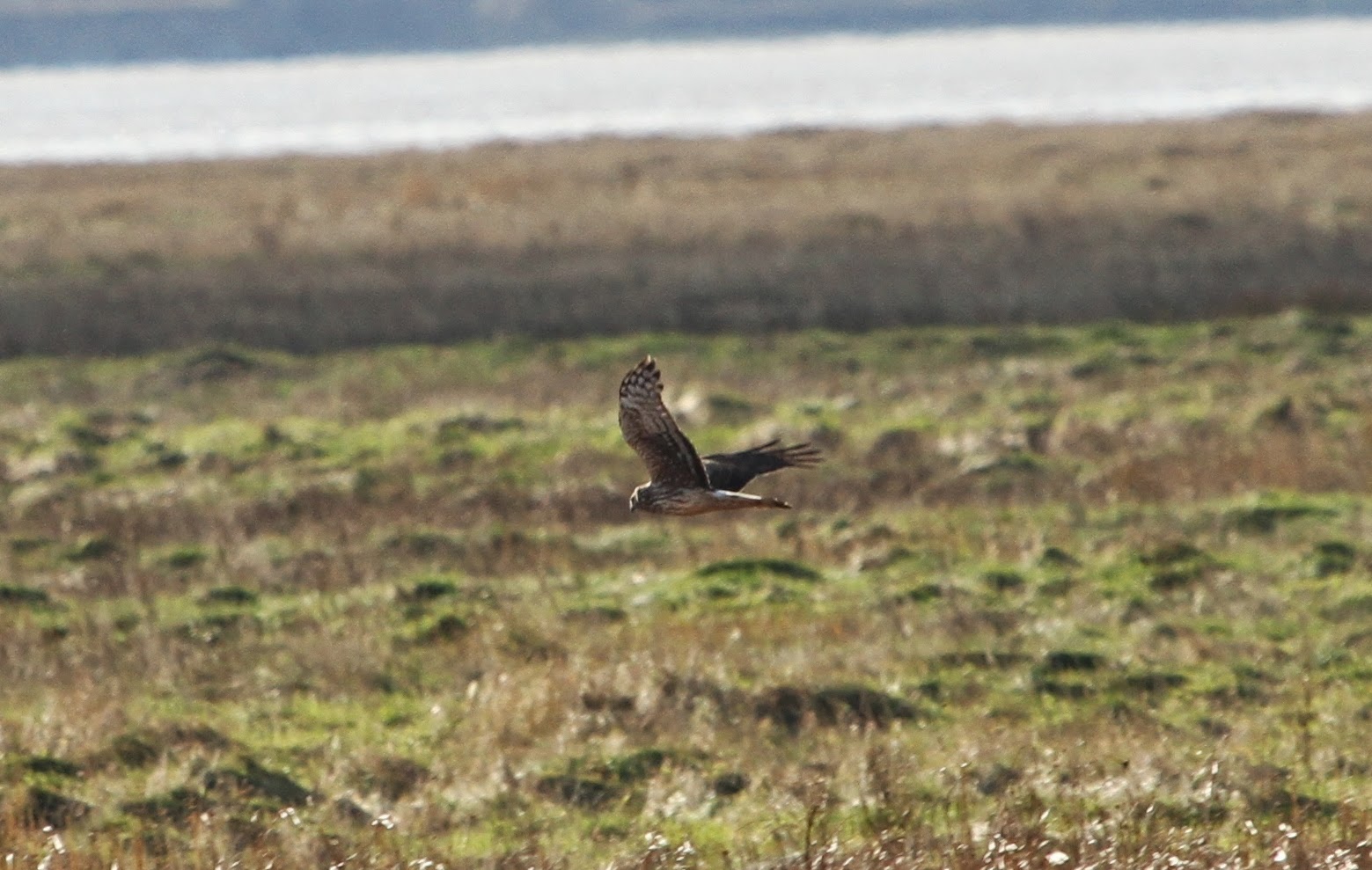 So overall a brilliant session at Parkgate interacting with people and seeing some great birds. It will be hard to beat a weekend like that!