2015, a new start for everyone, and of course new hope for our wildlife. I started my 2015 with a full day out birding around a couple of my local places; however before visiting these places, I have to tell you what my first bird of 2015 was. I'm sure you can all guess, as it was seen in my garden very early, and has been the same first bird I've seen for every New Year three times running. This bird was indeed the Blackbird, which also finished my year of 2014. 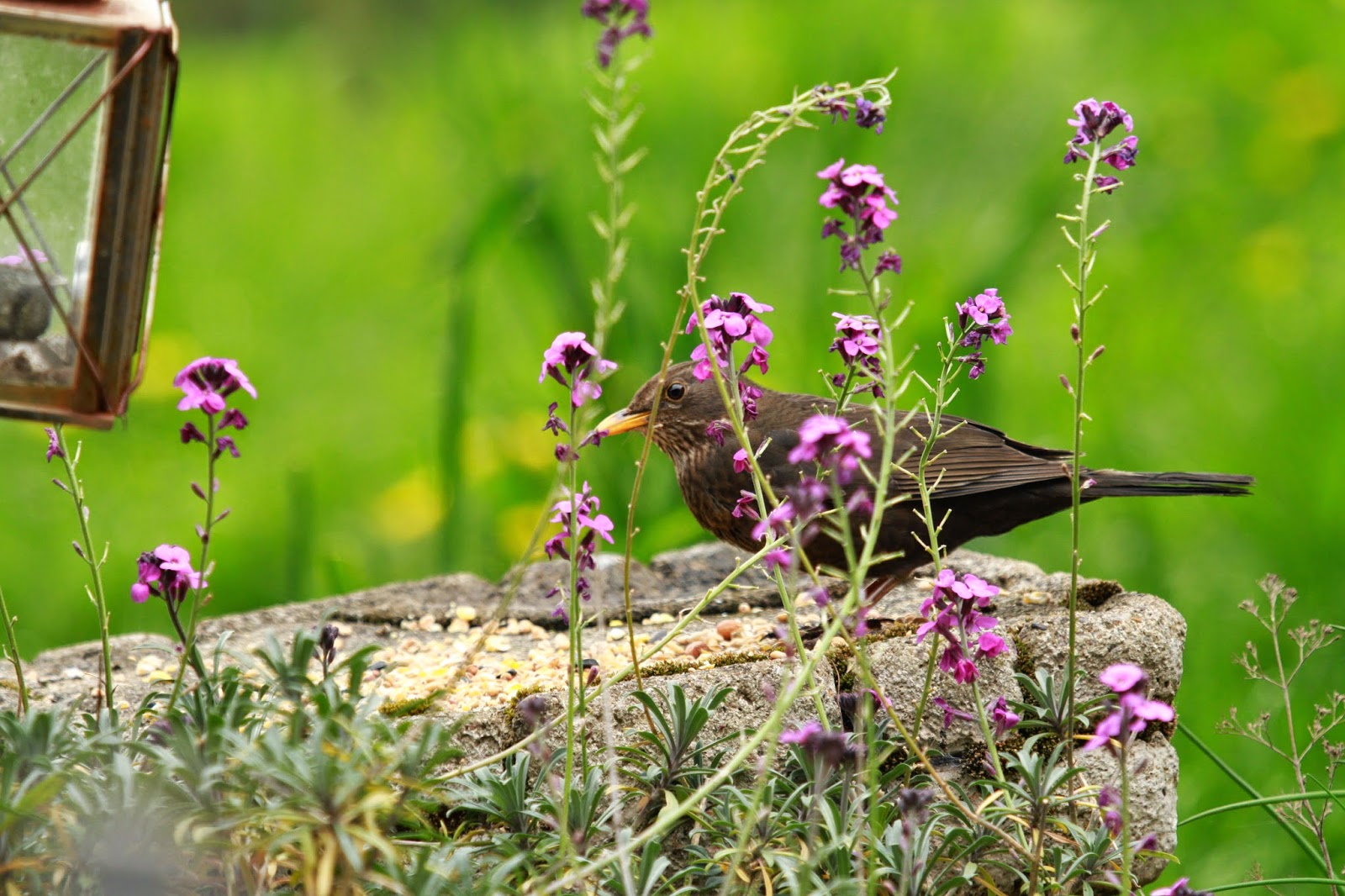 Taking advantage of the milder snippet of weather, as a family our first birding destination for 2015 was Sandbach Flashes, a place we have just started to really get in to. Basically, Sandbach flashes is a decent sized permanently flooded hole in the middle of a field surrounded by other flooded areas, attracting a good amount of wildlife, particularly wildfowl. During a quick scan of the feeders I noticed a Tree Sparrow (right, on seed feeder below) on the seed accompanied by a House Sparrow (left). always nice to see Tree Sparrows, especially on the first day of the year. 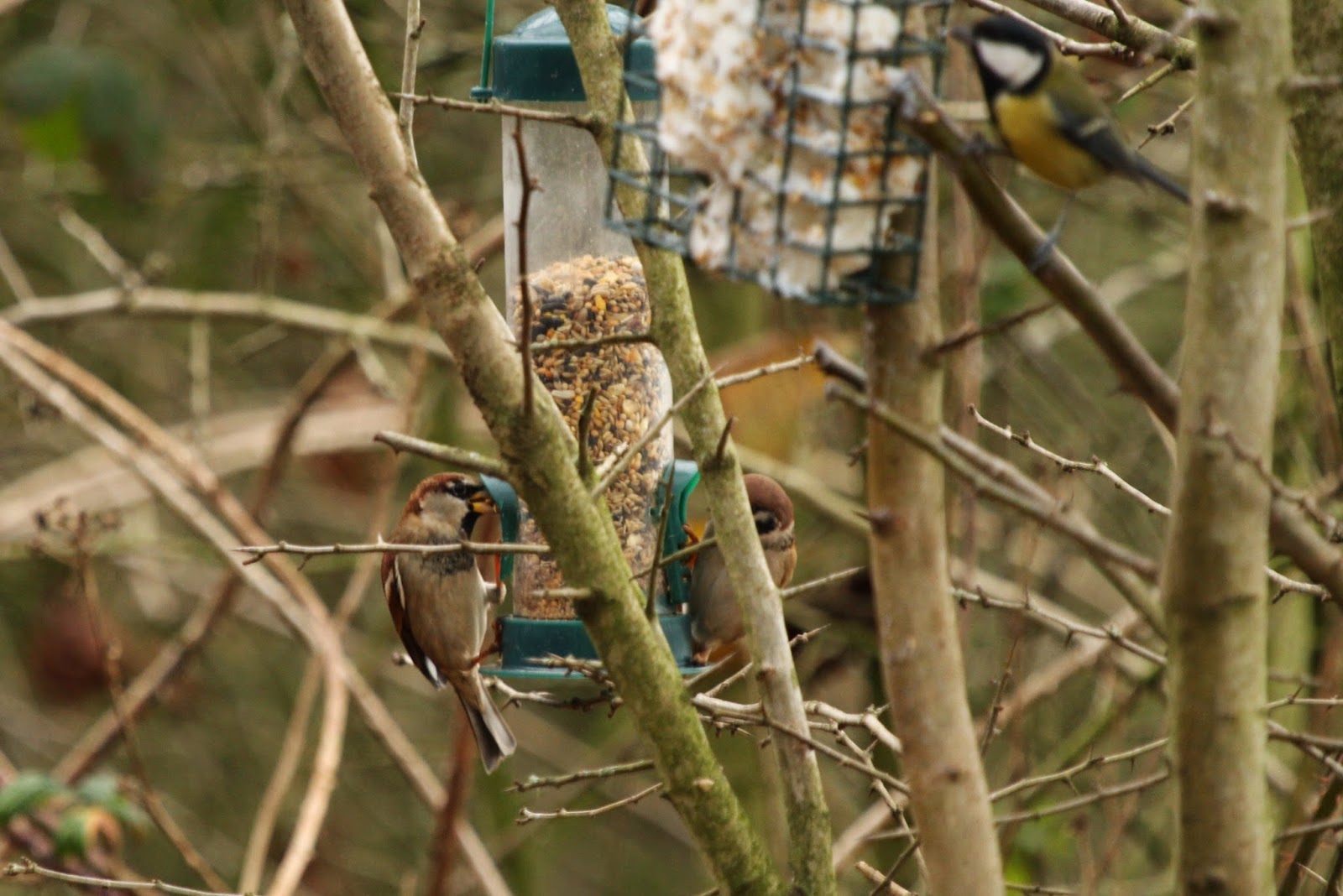 
Throughout the course of the morning, I scanned in detail the main water itself, noticing large numbers of Wigeon and Lapwing spread out across the water and the field. Within the mixture of birds it was also nice to see good numbers of Teal and Tufted Duck. There must of been about 300 Lapwing and a mixture of about 1000 ducks, including some stunning Shoveler. The majority of wildfowl were actually feeding in the fields, with the Lapwing occasionally being spooked by the wind and all lifting up on mass. 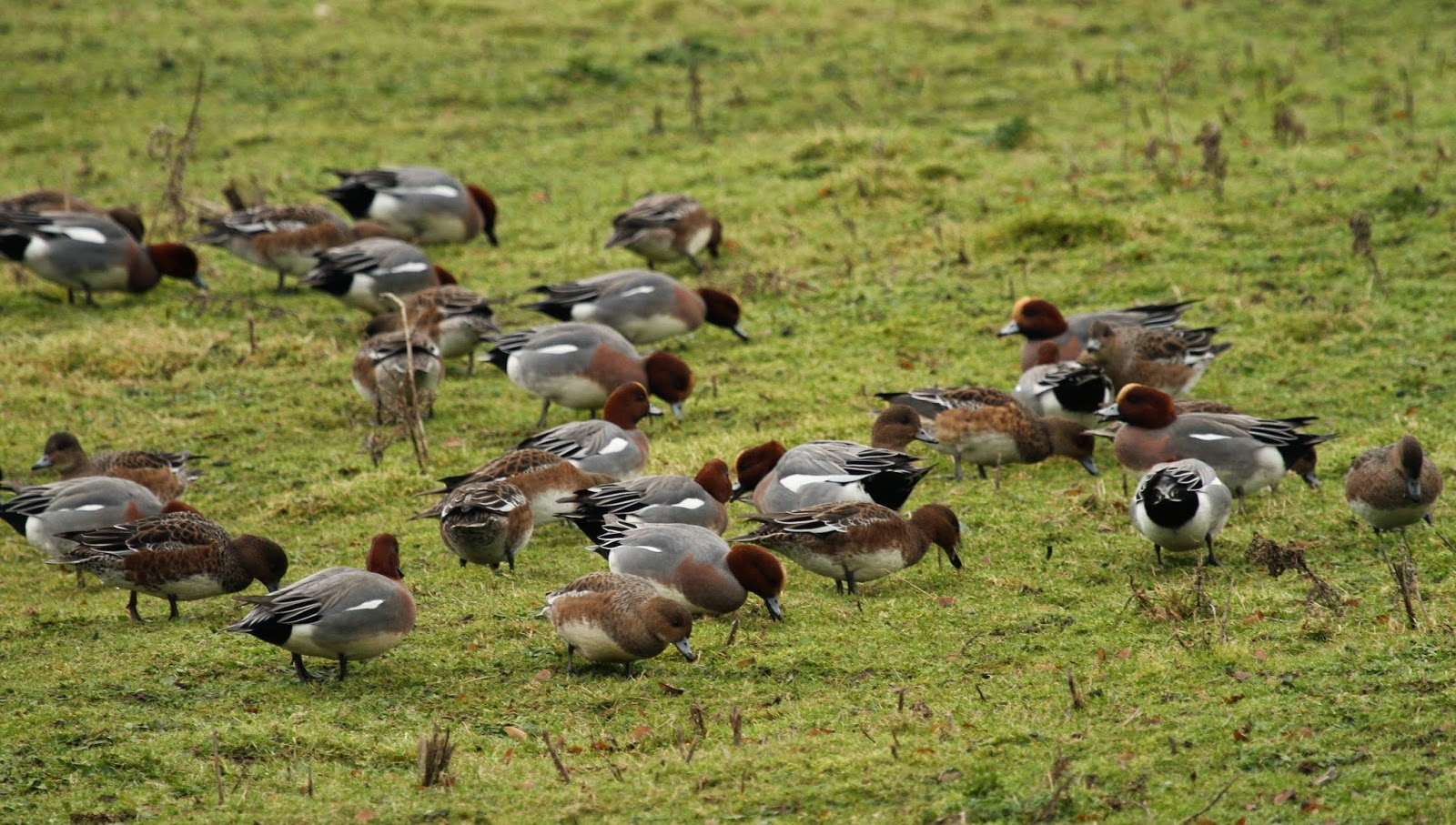 
As you can see in the picture below, there were quite a few of birds to sort through; however I did so carefully, finding several Curlew and about another 100 or so Starling which kept building in numbers until we left. As usual, we were recording all of the data into a book to be uploaded on to the BTO's BirdTrack (with a good amount of species observed so far).


After we had studied the main pool for long enough, we all moved on to some of the flooded areas just the other side of the main lake. As usual the first flooded patch didn't have too much to offer apart from five Curlew, a couple of Teal and Wigeon. Also a solitary Lapwing moved from it's vulnerable position to join the large flock just across the road.

After sorting through that huge mixture of Gulls I moved on to see what else I could find. I managed to spot about another 200 Lapwing and a couple of Tufted Duck.


However, some of the other more unusual waders were also present.  I spotted 3 Ruff, which are always nice to see. I haven't seen many Ruff in the past, so was lovely to see them so close to home. Another one of my favorite waders, the Redshank, was continually strolling along the grassy bank of the water. 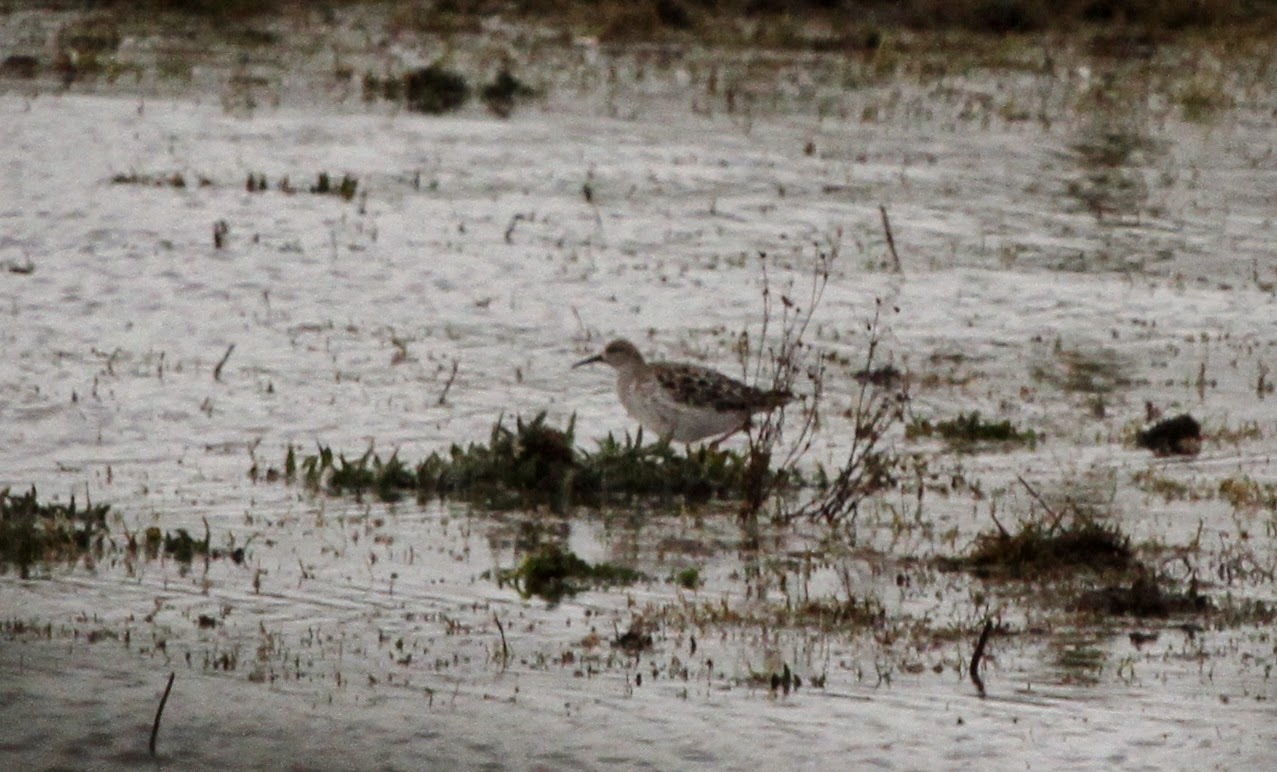 
After a great morning at Sandbach Flashes, we spent the majority of the afternoon at Frodsham Marsh, a place I haven't really visited enough since I got my new scope.  I was really glad to visit as I got some great birds despite the horrible weather racing in. 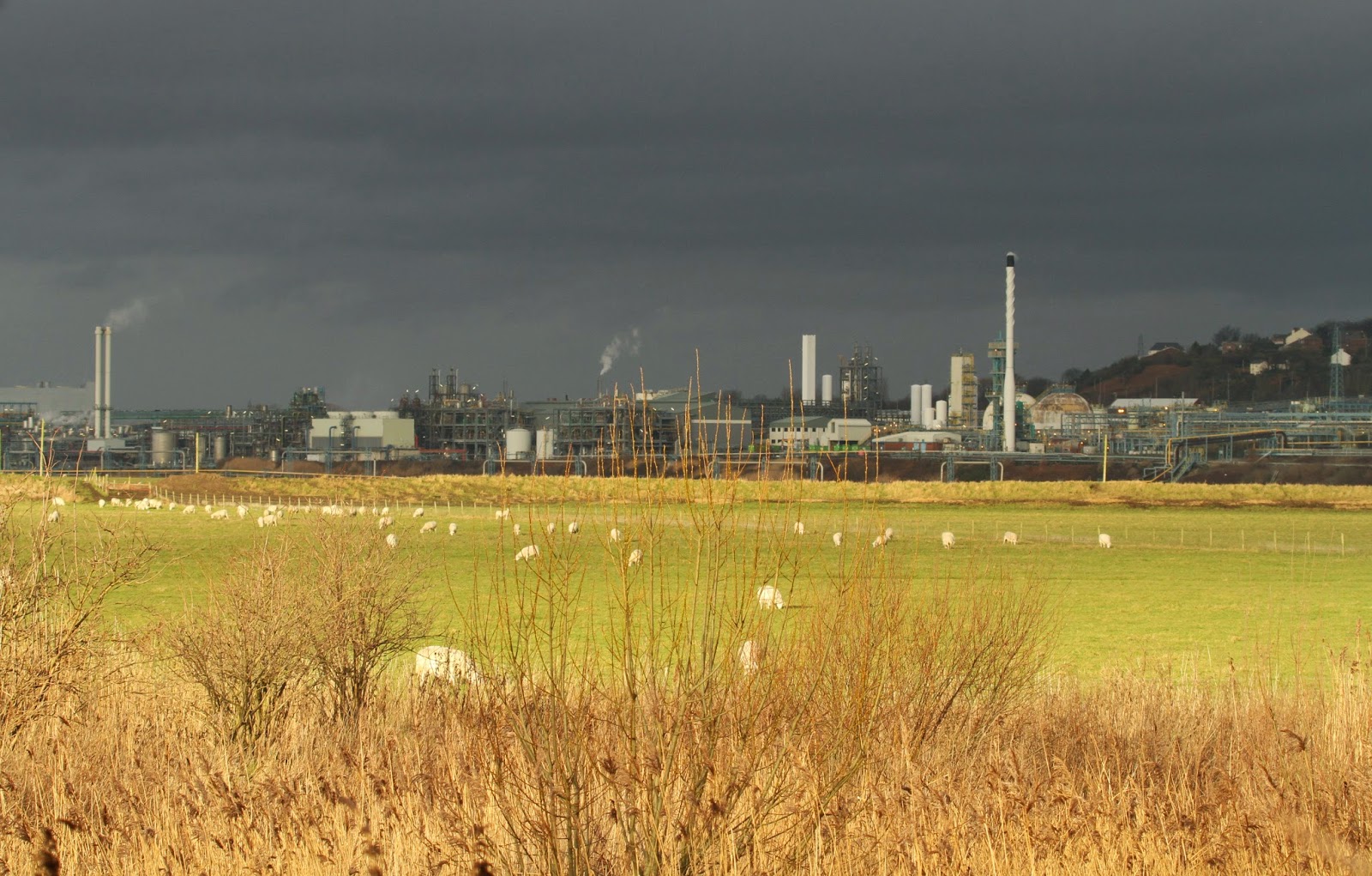 After a good scan of the fields, I observed a large flock of Lapwing mixed in with a couple of hundred Golden Plover. These birds looked stunning against the black sky, with the sun light shining directly among them.  I haven't seen Golden Plover for ages, so was quite glad to see them in good numbers and putting on a great display. 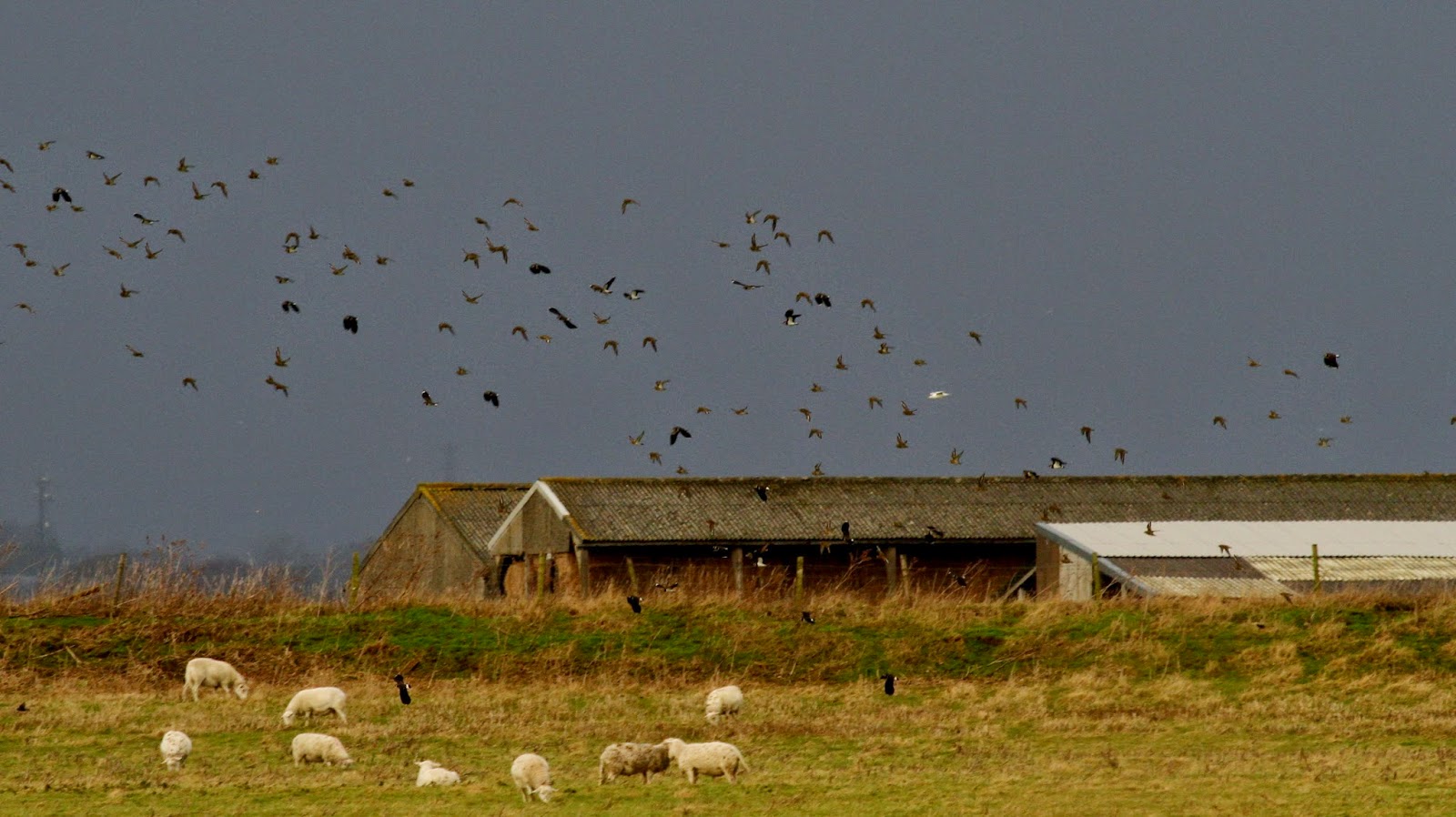 
On  the main scrape (No.6 tank) I noticed about 100 Teal, and about 50 Black Tailed Godwit, but I did keep getting distracted by those Golden Plover rising out of the field in huge golden bursts.


Rapter-wise we saw some absolutely stunning views of a Buzzard catching and eating prey in flight. This which was a brilliant sight to see as it kept passing the prey from it's talons to it's beak (and all time being mobbed by another Buzzard). 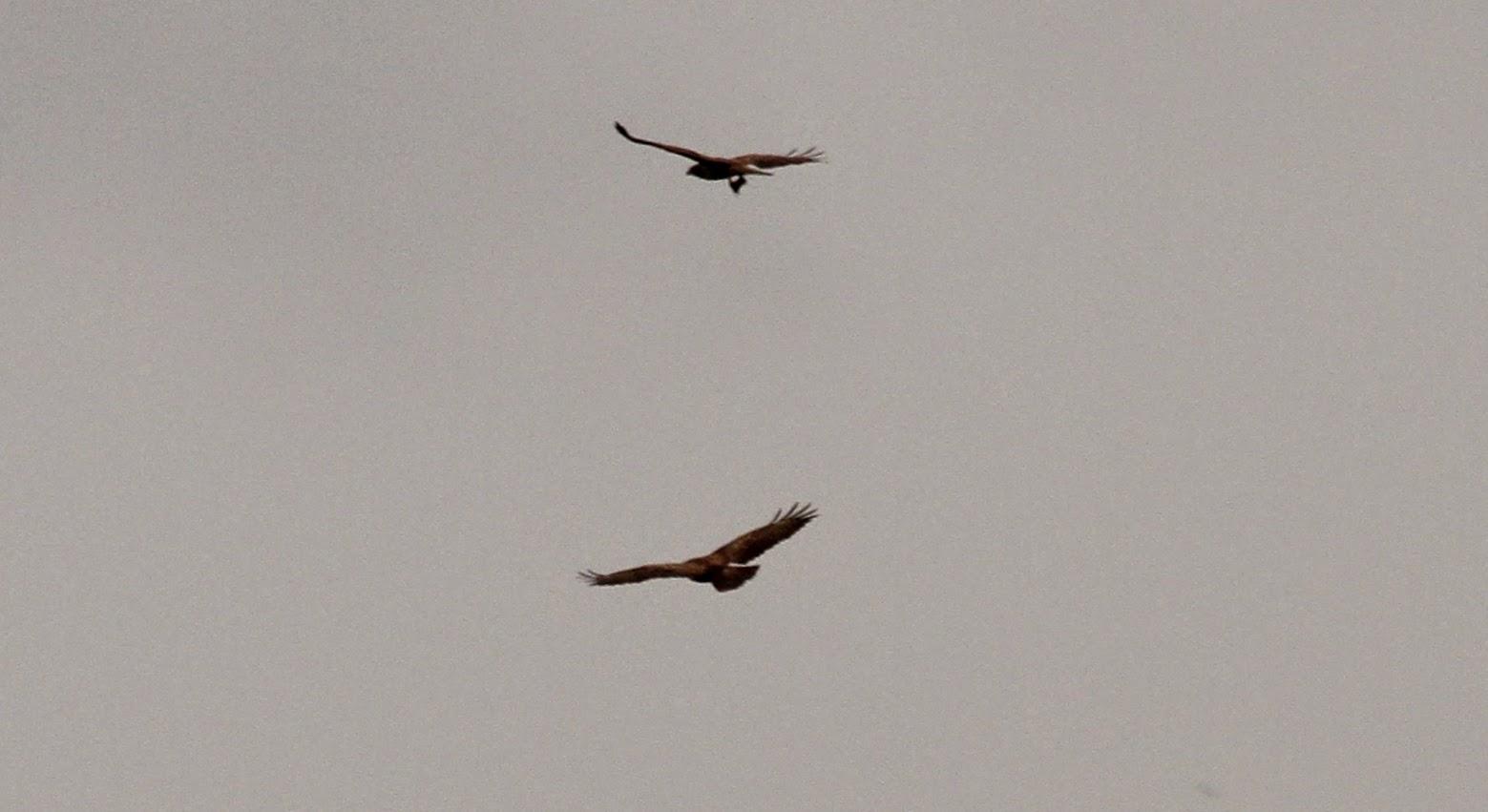 Buzzard with prey at the top


The day finished with a roost walk at Winsford Flash (a place I am really going to focus on in 2015). Yesterday I got a new species for this site, a bird I'm surprised I hadn't seen before there, it was indeed a Goldeneye, Winsford Flash has had some great birds in the past and I can't wait to start tracking it a bit more closely.  Great Crested and Little Grebe finished the day off nicely. 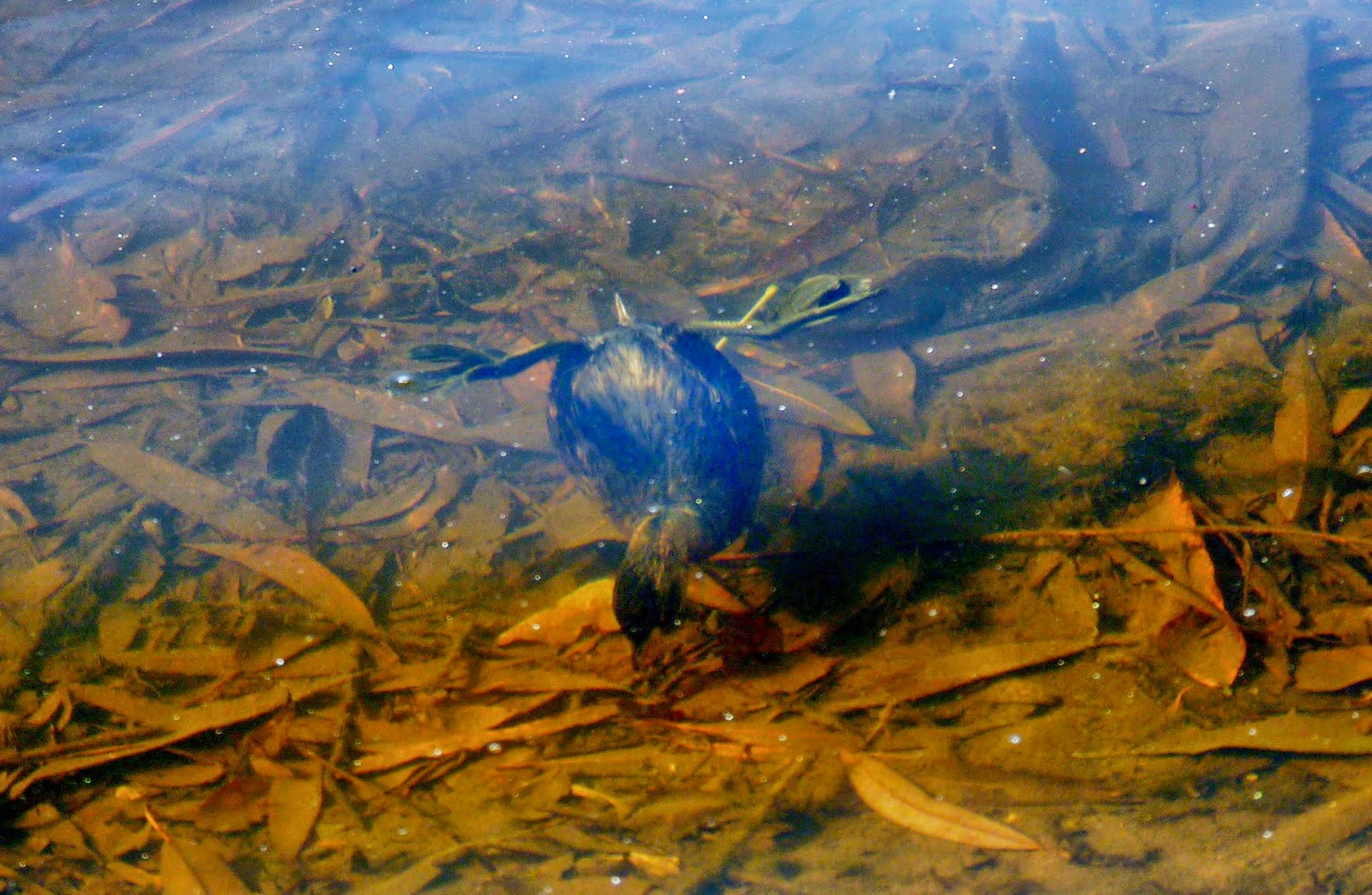