Due to strong wind this weekend, ringing was sadly cancelled, so today we all decided to do a bit of coastal birding, stopping off at several different sites. To start off with we took the M56 up to New Brighton on the Wirral (where I have visited before for the purpose of watching Project Wild Thing). However this time the visit was all about birds (and a smooth promenade for Harley's scooter).

As we arrived the tide was right in, splashing up against the promenade defense and on to the main path; where still some people decided to walk alongside the sea wall, no doubt getting drenched. Anyway we resolved to wait a while for the tide to retreat a bit and then walked slowly along the promenade until we came to the marina just opposite a shopping arcade.

After a good scan of the marina water (looking for any merganser or duck species) we turned to check the decking areas off the main wall. These smaller strips of wooden decking were packed full of small waders sheltering from the wind and resting whilst the tide retreated far enough back for them to return to the main estuary.

The majority species of bird in the flock were Redshank, however I manged to pick out a couple of nice birds, including one of my target birds of the day, the one and only stunning Purple Sandpiper. Before I set off, I was hoping for even a brief glance of one, however I counted 11 of these birds sheltering with some Dunlin. I felt privileged to be this close to them, and see them for the first time and for so long. 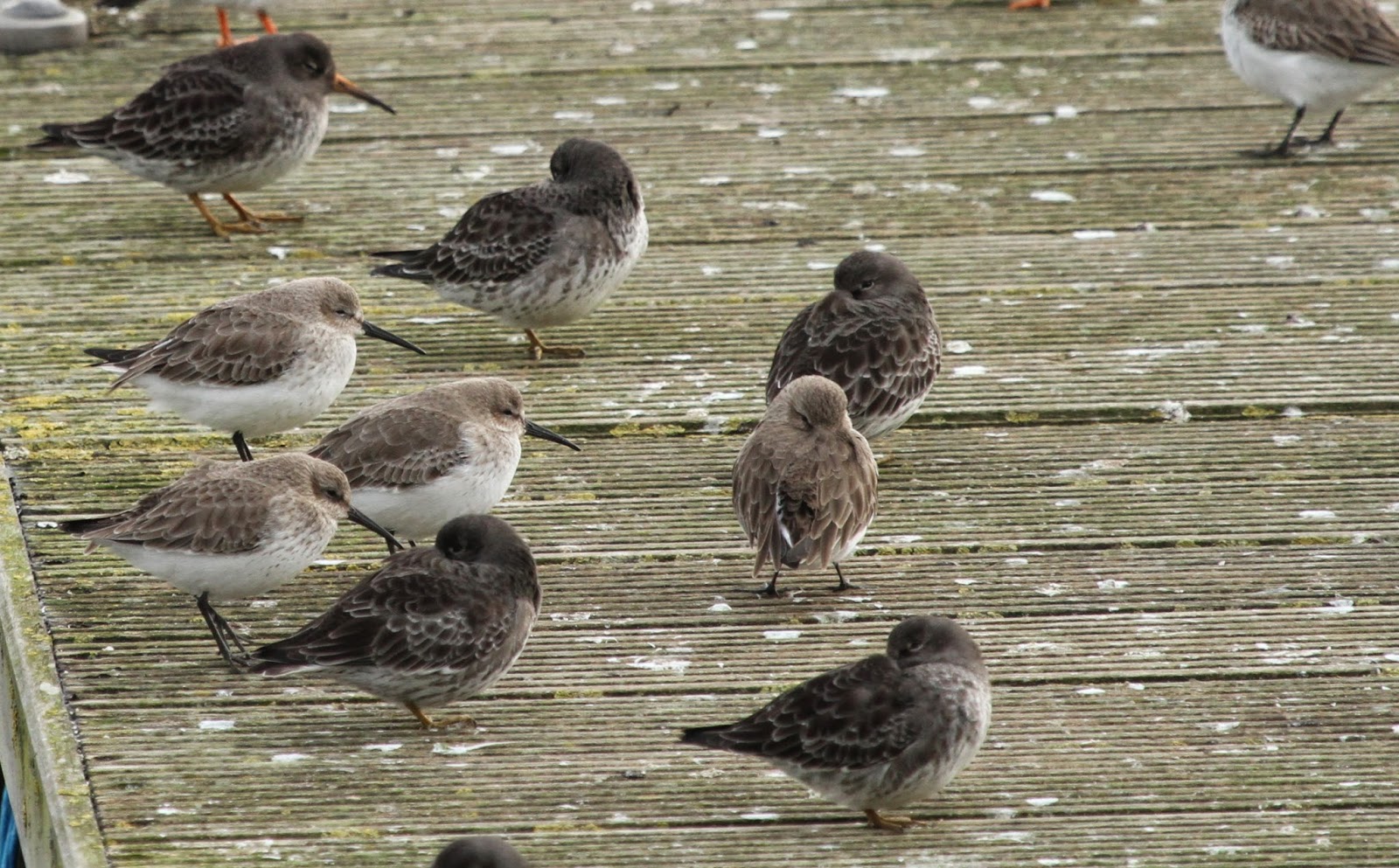 Along with the Purple Sandpipers I noticed a couple of Turnstones, and was amazed at how well they can blend in with the plumage of the other waders when they were all hunkered down. After a while a couple of these birds took flight to different areas, working with the tide.

It felt weird that the Purple Sandpipers were surrounded by restaurants and several different amusement places, yet people strolling around have no idea what amazing wonders were right under their noses. 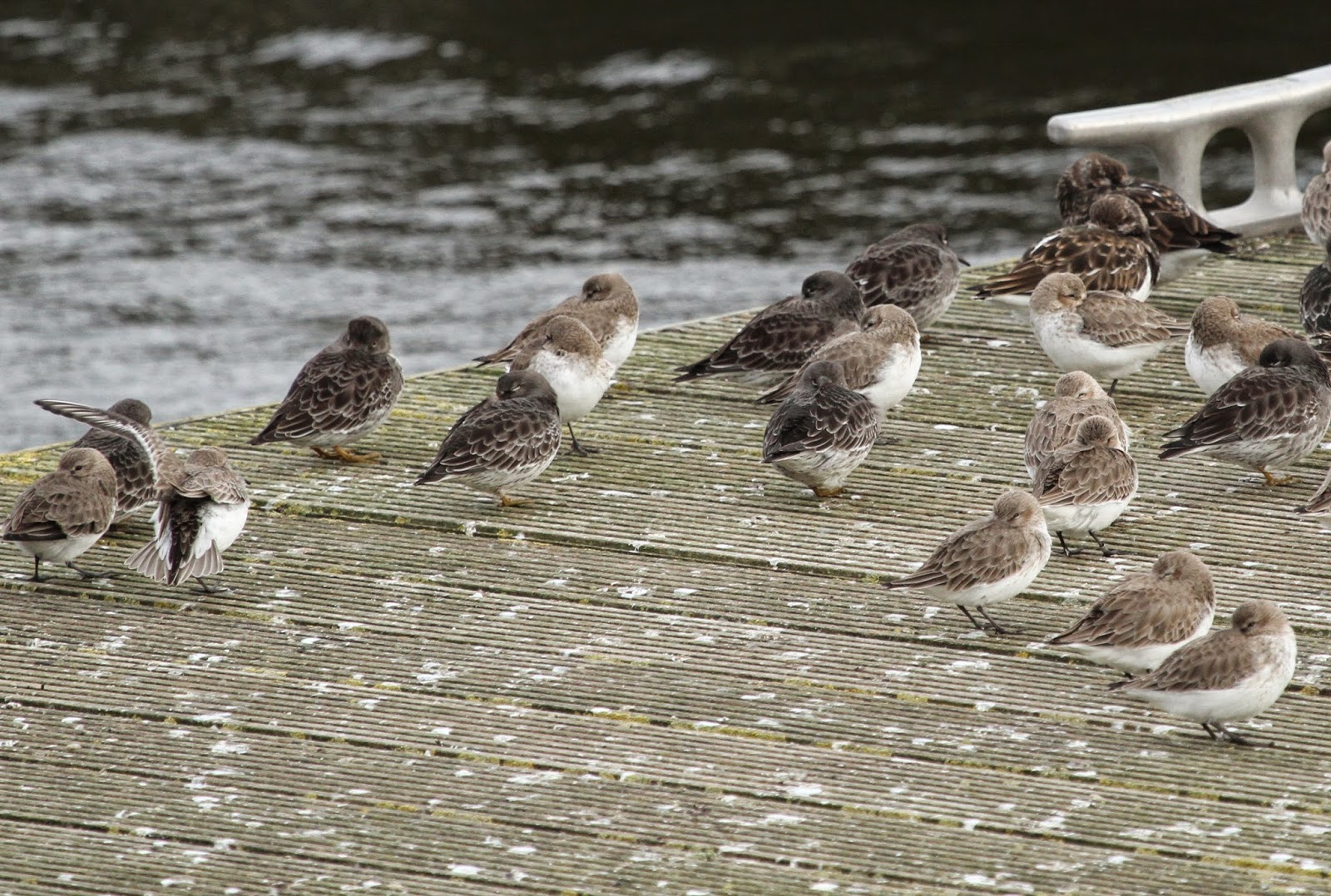 After a good hard look at the Purple Sandpipers, taking in all the knowledge of their plumage differences, we decided to move on further down the promenade. As it was quite windy, there was a bit of sand being whipped back and forth across the path, so we had to make sure the scope and cameras were packed away. We got through the worst of the sand storm and arrived at another part of the beach. The wind must have been a bit too strong for even the bravest waders, as there was nothing to see, so we wandered back for one more look and those stunning Purple Sandpipers. 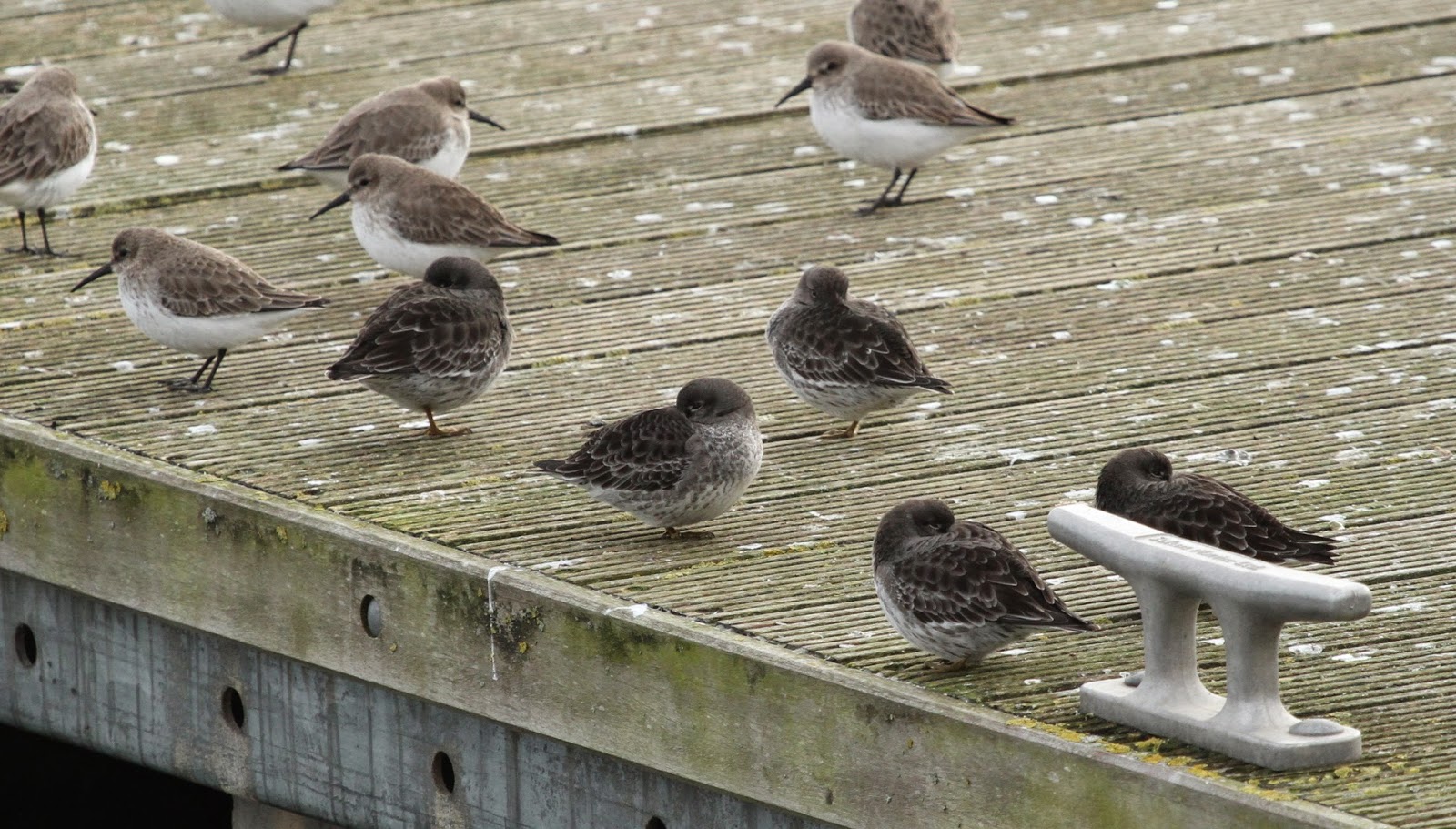 As we walked back to the car, we noticed the sea spray was still climbing over the edge of the sea wall, threatening to soak you if it could! The next stop was to try and find the Snow Bunting which were right at the other end of the promenade. However, we decided to go for it anyway, despite the icy cold chill of the vicious wind. 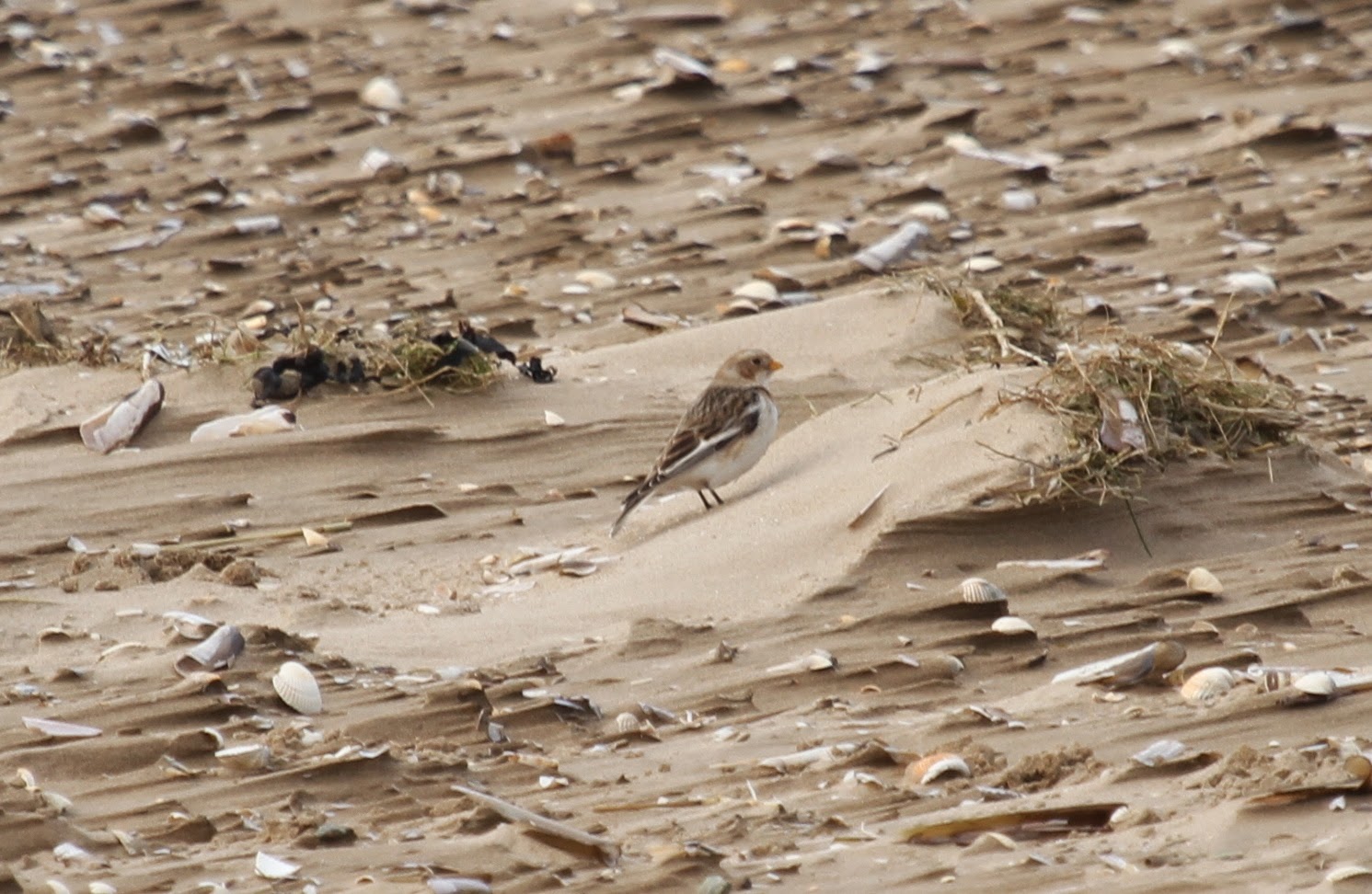 We knew finding these birds was going to be a challenge, however surprisingly dad soon located them, not to big a distance away from us. Through the scope these birds looked great in the winter plumage against the varied layers of sand; flighty and skippy, dashing from smaller dunes to the next, but lying low if anyone passed close by and relying on their camouflage.

After noticing one (above) a second one came to join it, hunkered down against the sand, probably feeding and sheltering from the wind. However, in the freezing cold wind, we couldn't quite manage to stick around for longer than fifteen minutes, so we resolved to move on to one of our next locations, the marina area at West Kirby. 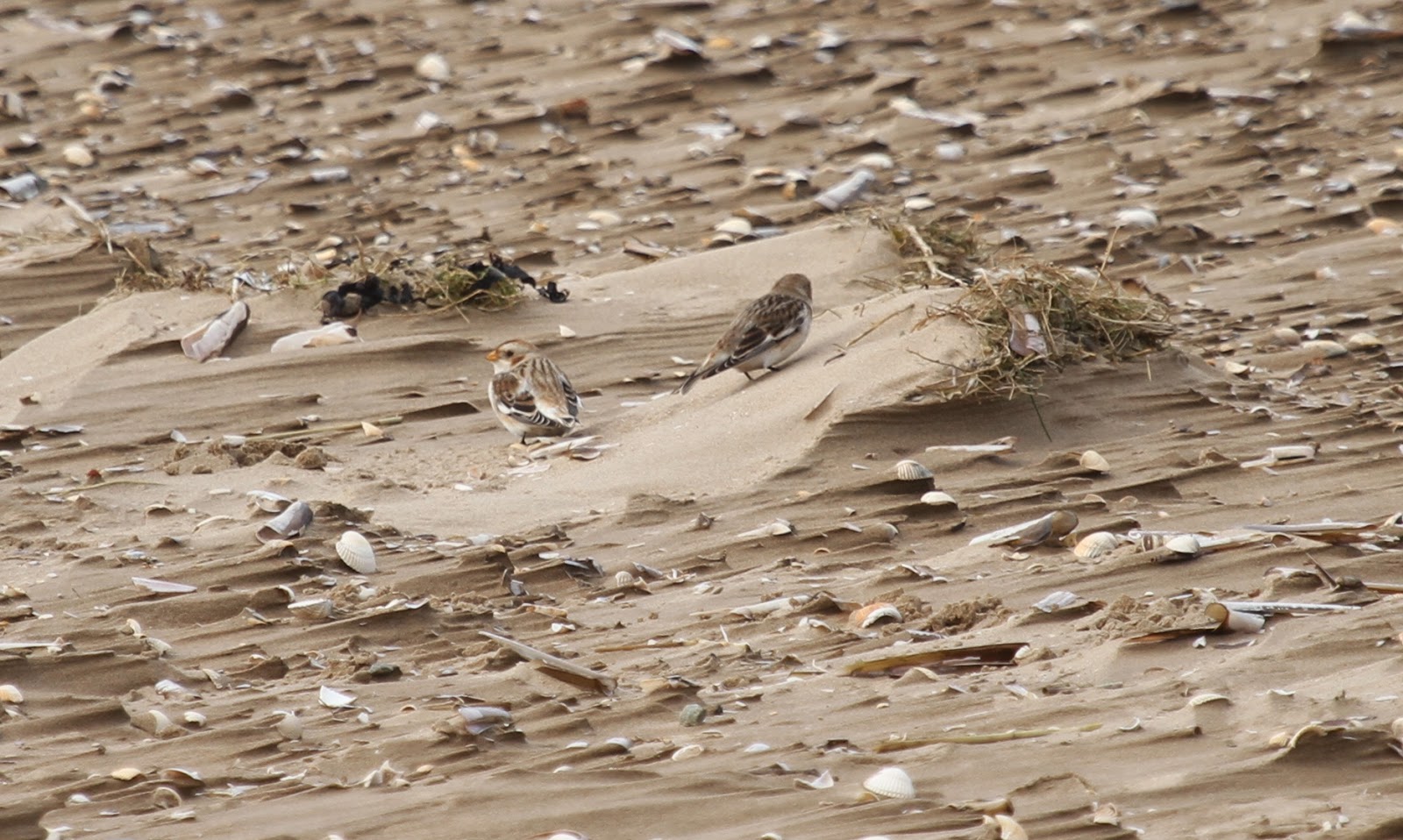 After a brilliant trip and birding day out at New Brighton, we moved on to where we saw the summer plumaged Grey Plover a few weeks ago, West Kirby. Unlike last time the marina was empty apart from a few Cormorants, probably due to the choppiness of the water.

After a good scan of the marina, in case of anything I missed, we moved onto the path alongside the estuary, seeing firstly five Turnstones about two meters away which was great to see. Also out on the estuary we could pick out hundreds of Oystercatcher, thousands of Dunlin and a couple of Grey Plover, feeding alongside the retreating tide.

After a great day, I couldn't wait to get back and blog about the day and relive those special moments. 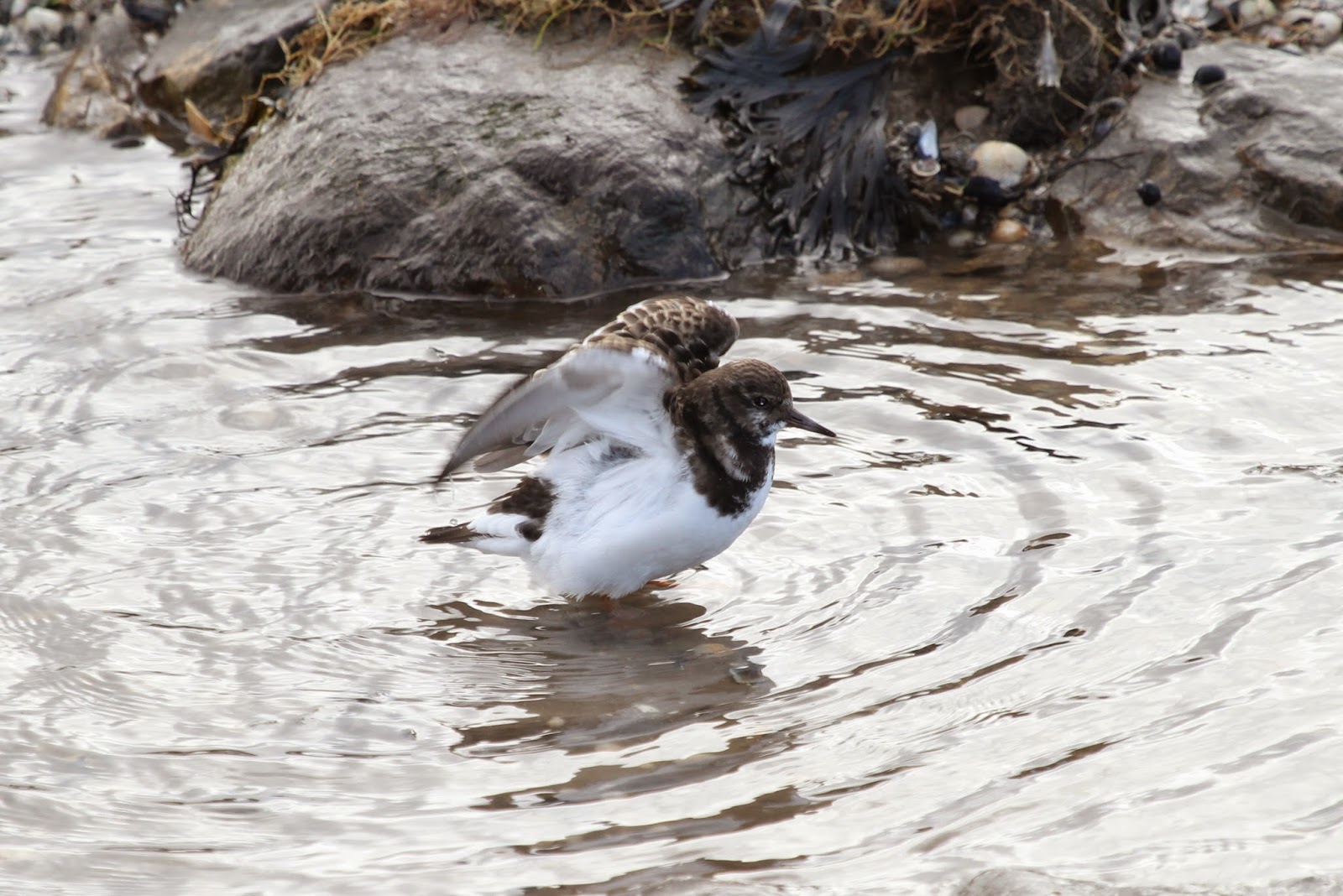 I hope you have all had a great weekend.