On Friday, after a hard working term at school, I finally broke up for half term, on my birthday,and I thought what better way to start my birthday night and half term by visiting Winsford Flash. On Friday evening there didn't seem to be too much about, despite the water levels being low. We only saw a few Gull species (mainly Black Headed and Lesser Black Backed), so we decided to call it a night and return early in the morning. 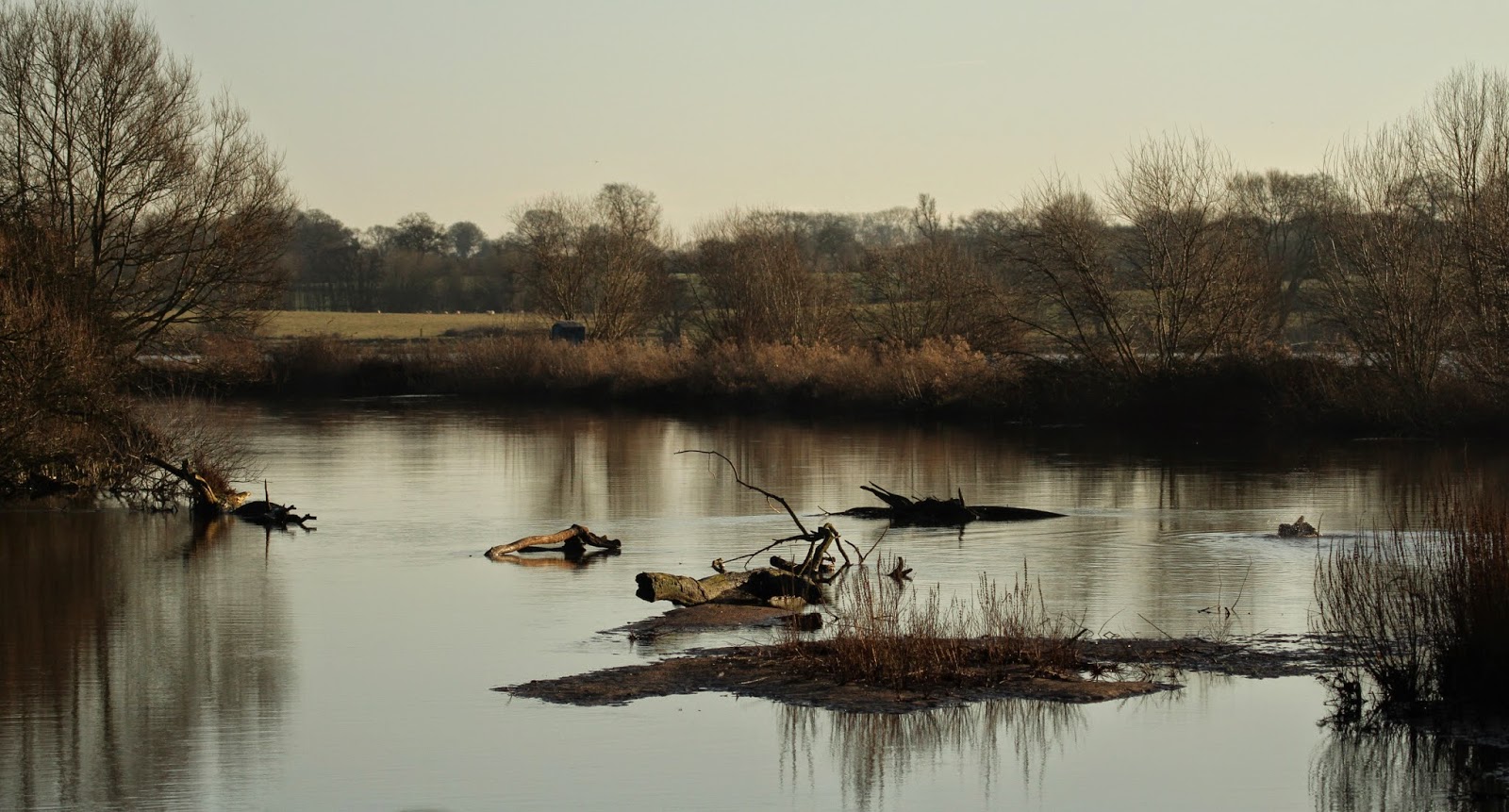 When we got home it was time to open my presents, and to my delight I got some brilliant gifts, including a new set of Opticron bins, and plenty of pocket guides, including one on mushrooms which I'd been asking for, for ages.

The next morning on Saturday, after a great birthday, I resolved, like I said, to head back to Winsford Flash. We (me and dad) decided to park at the bottom end of Winsford Flash to see if we could find the Kingfisher, and to our delight within five minutes a lovely female turned up and we got some great views. Nevertheless, there was a negative side to the visit. A while back I put up a wildlife crime poster, and when we arrived in the bottom car park that poster had disappeared, however the attachments for the poster were still there, so obviously someone had ripped it off. I will be putting another one back up of course.

After the great views of the Kingfisher, we moved onto the top side of the flash, where we normally get the more exciting species. Due to the water levels still being low, the muddy area held about 400 Lapwing and a surprising, but brilliant, 7 Teal (5 males and 2 females). My new binoculars were working really well and I got some great close up views of the birds.

Unfortunately though one of the four feeders I put up at Winsford Flash had been stolen, and there was also a dead Little Grebe floating near the bank, but not close enough to reach. So definitely a need for a wildlife crime poster (or 2) to go back up.

I knew this week was going to be jam packed with events, so after Winsford flash, a bit of patch birding, it was time to go ringing, this time doing a roost. I was so glad to be out after being sick on the Saturday last week and the weather holding us back for much of January.

Only part of our usual team were out this weekend as they had other things on, but it was great to see Peter, Moxey and Sophie;  however catching birds was a bit slow during the afternoon. The usual tit species were about and it was nice to have several Goldcrests with a mixture of new birds and a couple of re-traps from several years ago.

It wasn't really until a lot later in the afternoon when things really started to get going when the Chaffinches came into roost.  One thing we have noticed over the last month or so is the lack of finches in general, there doesn't seem to be that many about across our various ringing sites.

Whilst the Chaffinches were coming in, we also managed to catch this superb looking Jay. 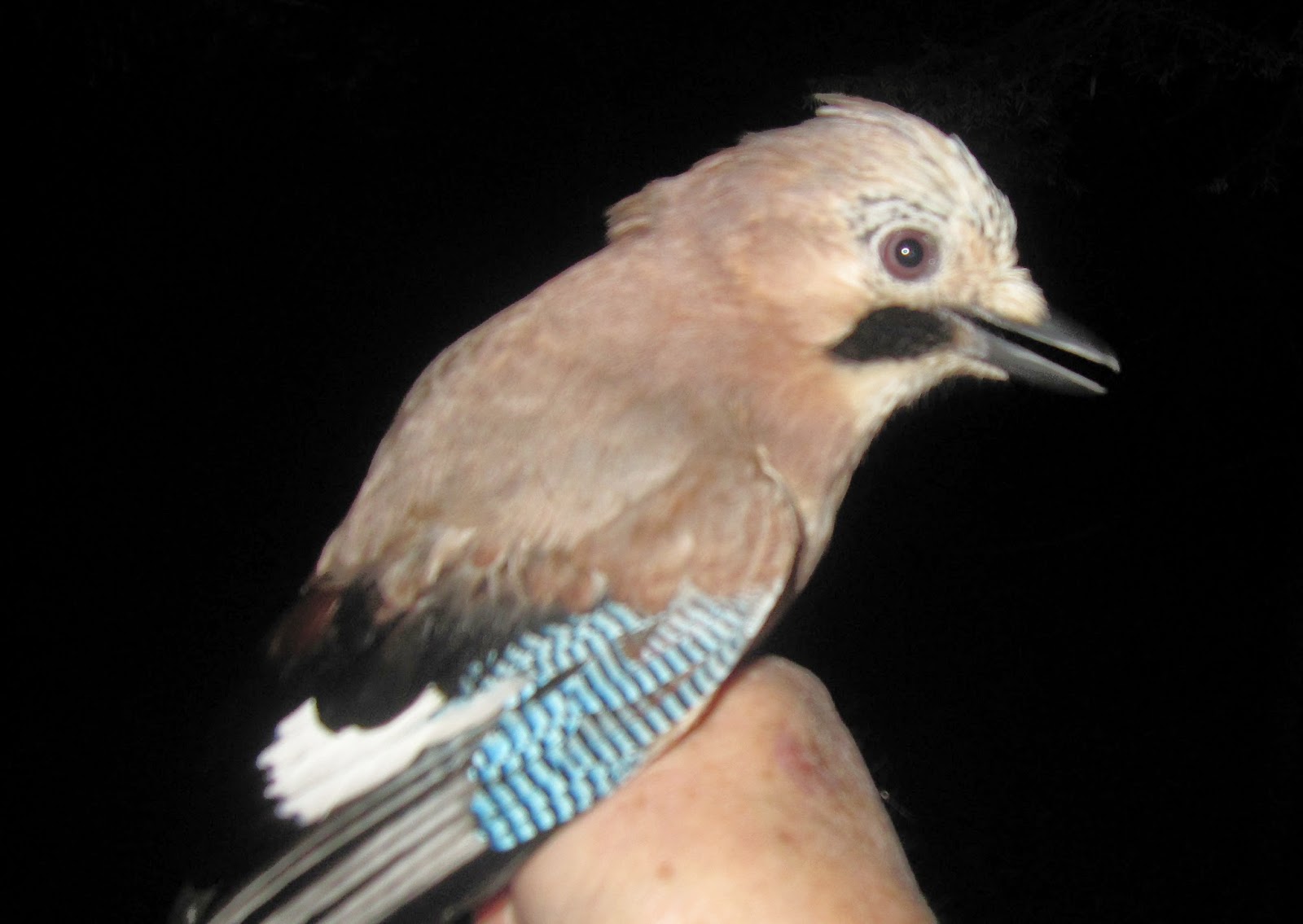 Jays are beautiful birds and we don't catch that many. In fact, not that many are ringed across the whole of the UK as they are very shy and wary and are off in a flash with their very noisy shriek type call.

Jays are sometimes shot or trapped like magpies and have been persecuted a lot over the centuries for many reasons as they have been described as pests and their blue feathers were used for fishing flies or as decoration for hats. I have an old book which someone kindly gave me and thought I'd look up what it said about the Jay ...

"more strictly a woodland bird than the pie, the vinaceous  (I had to look that word up) plumaged Jay is less familiar, but in some game preserves its mangled corpse decorates or disfigures most keepers' gibbets. Persecution has failed to destroy it, and today in many areas, the jay is not decreasing."
This extract is taken from  Birds of the Wayside and Woodland - T A Coward.

After a great session of ringing, it was time to go home, however I heard news that my Auntie Jennie from Norway was coming over for tea, who I hadn't met since I was a tiny baby, so I was quite excited about meeting her, and asking her all about the wildlife in Norway (apparently she gets wolves and moose in the fields near by).  I really hope we can go and stay with her soon.

After a long drive home, I finally met her and I've got to say she was lovely, I even got a birthday present. I will see Auntie Jennie again at my Grandma's this week so I can talk even more about the wildlife in Norway and show her some of the wildlife in North Wales.

After it being quite a warm day, I decided to try my luck with the moth trap; it being four - five degrees over night (so the weather said, but I woke up to a frost in the morning). However, despite  this, the moth trap succeeded in catching one moth, but a species I've never caught before. Dad and I spent ages trying to ID it and came up with the following conclusions:

We think it is a dark form Spring Usher, however people on Twitter have said it's a possible Dotted Border, (but we think it is too small to be a dotted border)  so any suggestions and help on that would be very welcomed. 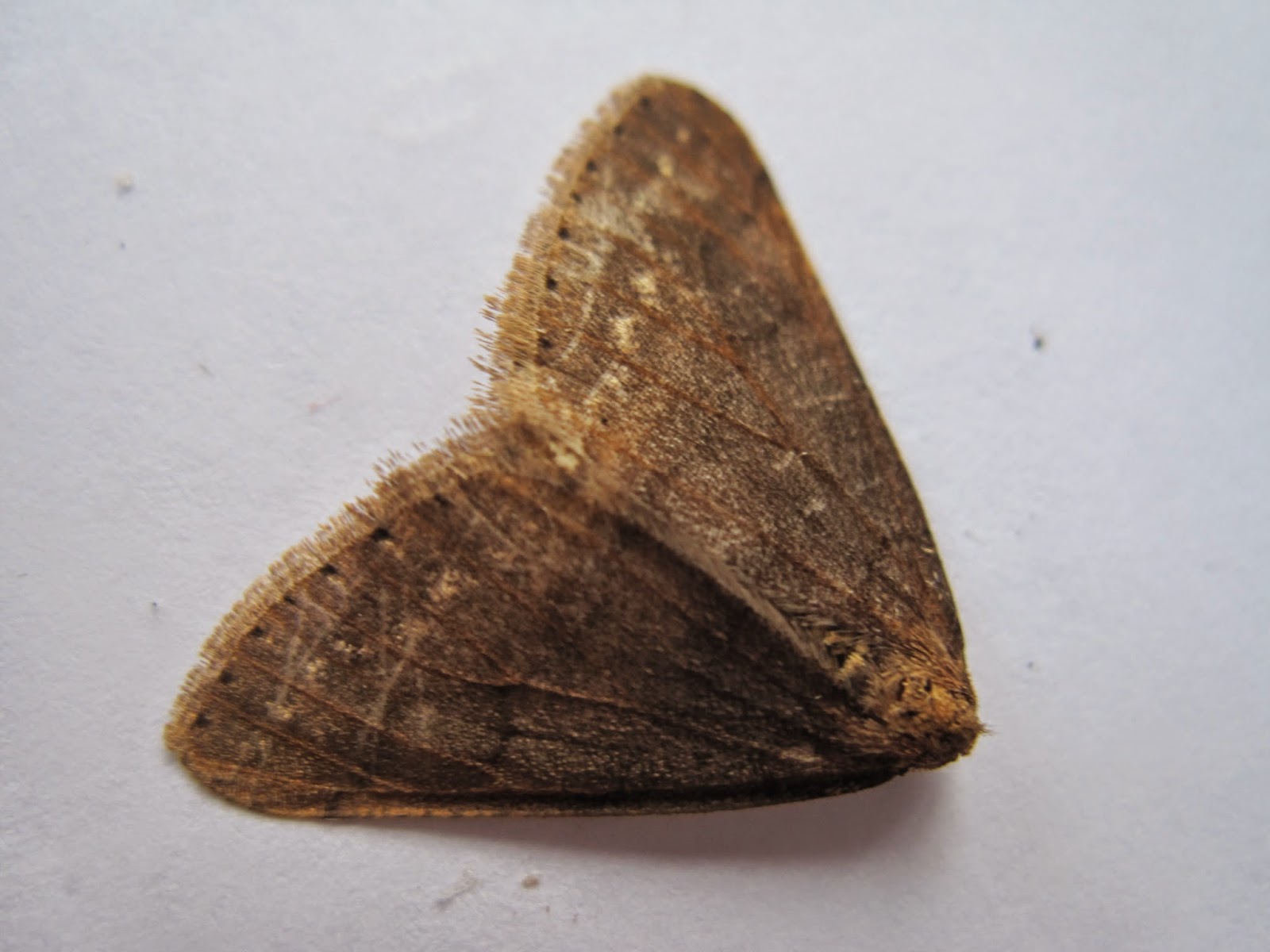 After I'd  finished with the moth, me and my mum this time decided to take a trip to Sandbach Flashes, since it turned out to be a lovely day for birding. Unfortunately a lot of the feeders had been stolen, so I decided to give away one of my fat ball feeders full of fat balls to help replace them. A very kind man helped us find a great place to hang it, hopefully high enough up to stop it being stolen.

As usual the wader life was pretty good, including hundreds of Lapwing, and I managed to pick out 4 Black Tailed Godwit, a solitary Redshank and Ruff (below). Also on the main lake I picked out a couple of Snipe, and of course the usual duck life, including Wigeon, Teal and Mallard. Now my mum wanted to do some photography, so we decided to watch the "letter box feeder" to see what came down, my mum managed to get some great pictures of the usual Tit species and one of my favorite finches, Chaffinches, including this unfortunate male Chaffinch which has Papillomatosis on it's leg quite bad caused by the papillomavirus. 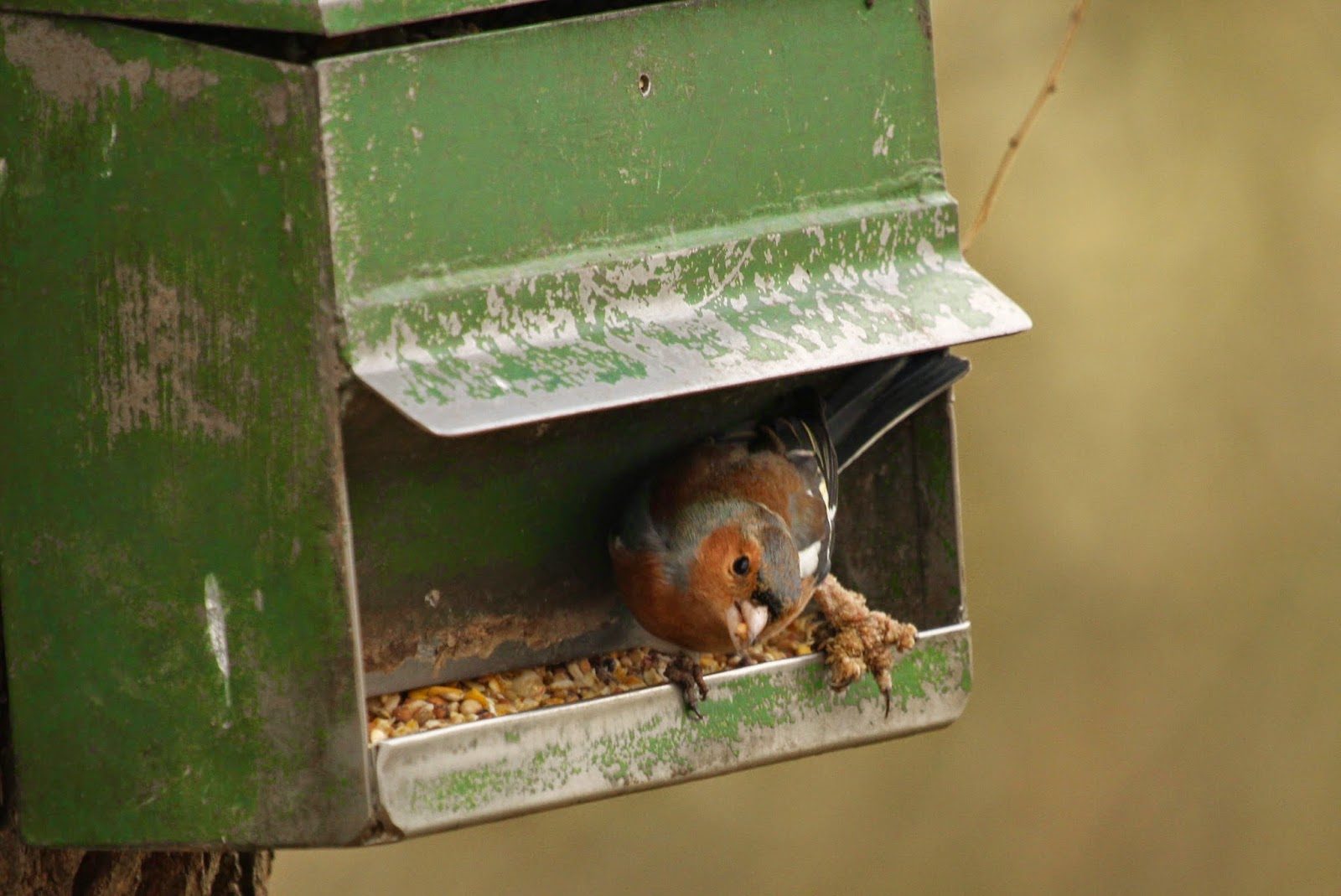 With it being quite a cold morning, the birds on the feeders seemed to be quite active, with woodpeckers, up to 4 individuals squabbling over food and territory. As you can see in the picture below this male Great Spotted Woodpecker managed to get the food to itself for a bit, on the larger fat ball feeder. All morning we could hear them drumming. 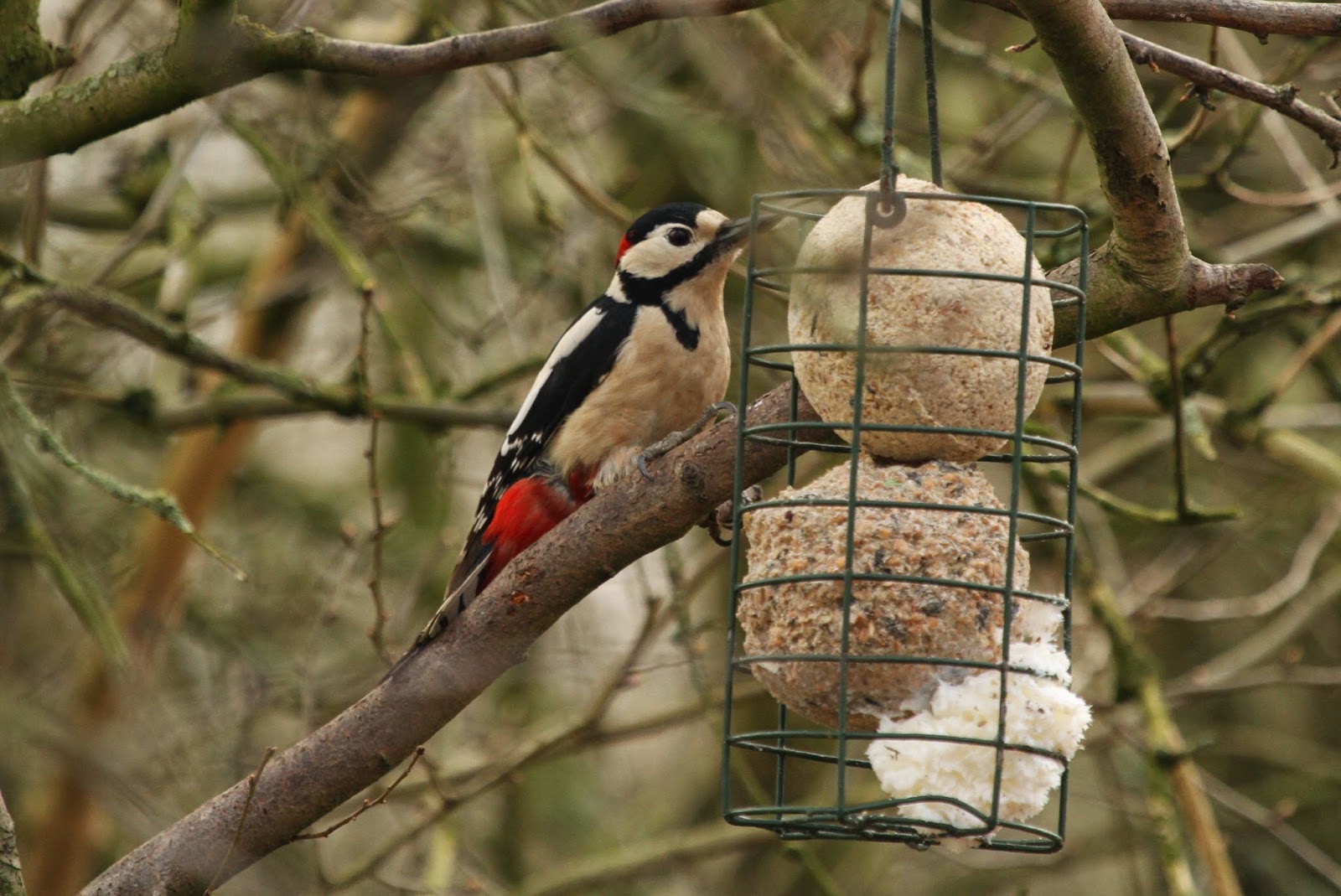 Mum decided to bring some of our own bird food, to see if she could get the birds on more natural perches and it seemed to slightly pay off with mum getting this funny, yet good picture of a Great Tit in a half flight position (just taking off). 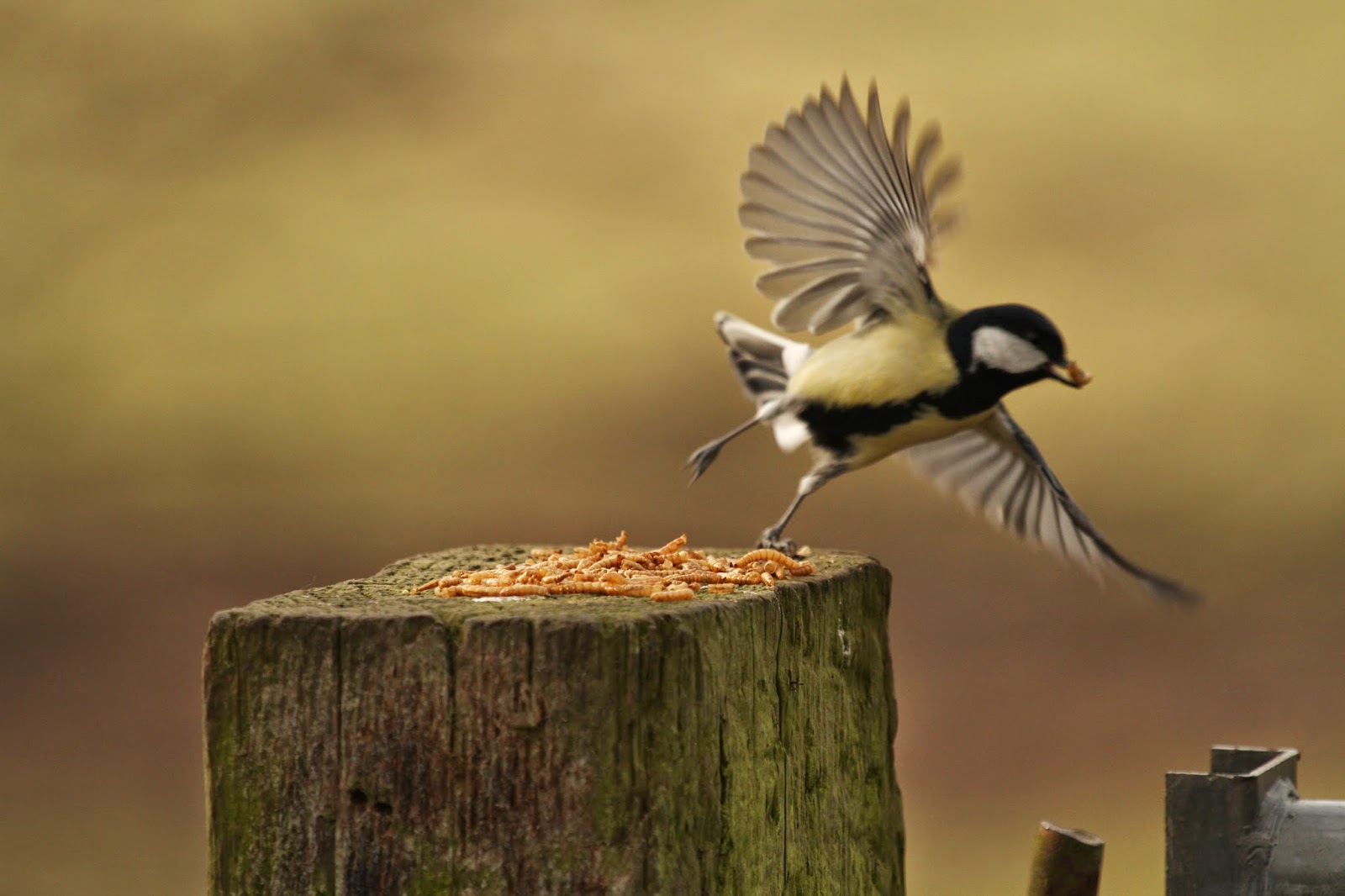 What a brilliant mix of wildlife for my first weekend of teenage birding.  Next up North Wales and then a great high tide weekend at Parkgate.