This year I have been able to take part in 2 different heronry counts which form part of the BTO Heronry Census, which first started in 1928.

During mid April I was out with Professor David Norman counting one of the local heronies  for the second year running.  The numbers were down again this year to only 60 nests (with last year's count being around 70).  At it's peak, this particular heronry held over 150 nests. 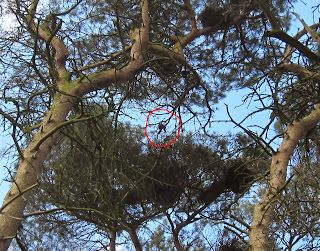 In this picture above you can see a dead heron chick dangling in the tree below the nest - its sad but can happen as they are vulnerable to falling out. 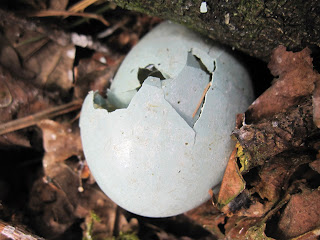 Once they fledge, heron chicks can disperse miles away from there original site, in fact they have been proven to end up in other european countries. Its possible and likely that the herons from this site are moving to other heronries, which is why the numbers keep decreasing.  It will be interesting to see how other heronry numbers are doing this year. We finished up the count by reporting all the information back to the land owner, who also thought from his own observations when he has been working the land that there weren't as many herons about.

This year I've also managed to count at my local heronry, just a short distance from home.  I have been watching this herony from across the river for a good few years, so I was thrilled to be able to take part in the actual count here this year. 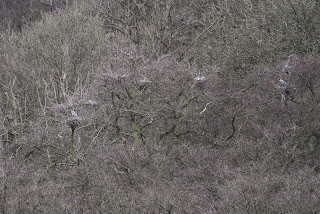 My initial thought of viewing the herons from the opposite side of the river looked to be about fifteen nests, however, when we crossed the river and got into the wood, we realised that the heron nests extended quite alot deeper, and seemed to be in deciduous trees, rather than the evergreen species, which was interesting.

The official who was taking us on the count, wanted us to count the active nests first, to see what our results were compared to his, as he had already previously counted them. In order to count them, we thought of the nests to be in three different groups along the stretch of woodland and ended up with a count of 31 active nests (which is more than double of what I originally thought, viewing from the other side of the river).

Looking at the records from previous years this heronry seems to be relatively stable, with a peak of 35 nests, and the lowest count being 26, so not bad. After further discussion with the official counter about one inconclusive nest, we all settled on a count of 30 nests.

It was great to be able to count our heronries again and I can't wait until next year.

Linking to Wild Bird Wednesday
Posted by Findlay Wilde at 19:22