Sunday was certainly an action packed day. It started with a fantastic ringing session, but more on that in another blog post soon.  After a great morning ringing, we headed from Lancashire, back through Liverpool and the Wallasey Tunnel to the Wirral, as Sunday afternoon was all about Hen Harriers.

Sunday was the last RSPB Skydancers on the Dee event for now, as very soon the Hen Harriers will be making their way back to the uplands for the breeding season.  The Donkey Stand (the usual place where we set up) was taken by workmen who were repairing/improving that area for the public, so this time we were raising awareness at The Boathouse/Baths end of the promenade.  The views down that end across the salt marsh are just stunning, however, you don't get quite as many people walking past to engage with. 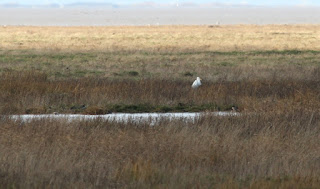 Visibility was great and the weather was Spring-like, despite the cold, however I didn't pay much attention to that, as I was entertained by the vast quantity and quality of bird life on offer.  I was also catching up with Elliot Montieth and the RSPB's Katy who was in charge of the event.

The first bird of prey encountered was a self found Short Eared Owl. It flew really close in to where we were, being only about 10 metres away from the wall at one point. I just watched it, totally engrossed and didn't even think about pictures.  Sadly by the time Elliot got into a suitable position for getting a picture, the owl had gone a bit to further away. He still got a great record shot though.

As the day progressed, it became clear that it was going to be all about raptors. Including a couple of species seen in the morning at ringing, my raptor total for the day was 7;  Merlin, Peregrine, Short Eared Owl, Hen Harrier, Kestrel, Buzzard, and Sparrowhawk. The Merlin was a stunning adult male and came quite close in to get some amazing views through the scope, as did the ringtail Hen Harrier that flew past a couple of times, also allowing some great views. 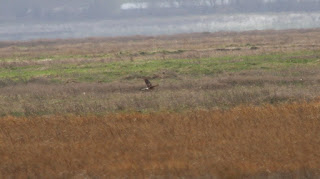 Some people had traveled from Derby and some from Bristol to see their first ever Hen Harrier. It was just fantastic being able to show them such a great view of the ringtail and I hope that is a memory that will live with them for a long time.

So what now for the Dee Estuary Hen Harriers? Well hopefully they will survive their journey to the uplands and then get to skydance before raising successful broods. Well that's the dream anyway. With so much against them, they need all the help and awareness we can raise.

If you are concerned about our natural world, maybe you could join my Thunderclap campaign to get MPs to think much further ahead when making decisions that impact the environment. You can join the campaign here and help shout out the message together, as one, on 19th April. 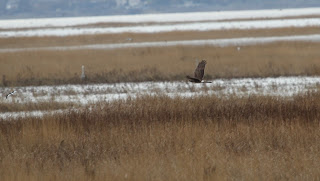 We all have a responsibility to speak up for the natural world.

Linking to Wild bird Wednesday
Posted by Findlay Wilde at 19:01