Tomorrow me and my dad will be ringing at a site we haven't been to in quite a while (so today we had a walk round the reserve to see what was about and heard lots of Chiffchaff and saw a Peregrine which flew up and landed on a nearby telegraph pylon).  As the site is close to Wigg Island, we thought it would be a good idea to call in there and see what was around.

There is currently being a new bridge being built over the Mersey Estuary and if you look closely at the huge pillars, you can see the surface is littered with lots of small holes. The local Great Tits seemed to be using them as a potential nesting site for the breeding season, as we watched a few of them checking out the holes. 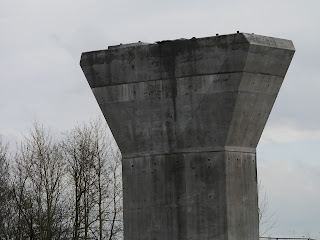 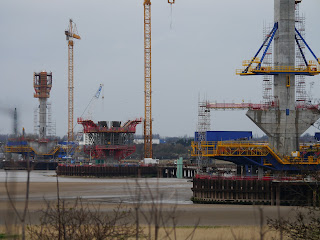 The main reason we went to Wigg Island was for the huge gull numbers that gather on the banks of the Mersey at low tide. Although winter is pretty much over, I was hoping for a possible Glaucous or Iceland Gull, sadly that was not to be, however I did manage a rather nice adult Yellow Legged Gull. We had to walk quite a distance to get close enough to the gulls to scan them so we could actually make out what they were. On that walk I also found my dad his first Swallow of the year.


The surrounding fields and woodland of Wigg Island were teeming with Mistle Thrushes, a bird that  you don't really see much of, especially not in big numbers. It was good to see that there were quite a few around mainly feeding in the fields; apart from one of them I noticed sat in a tree. 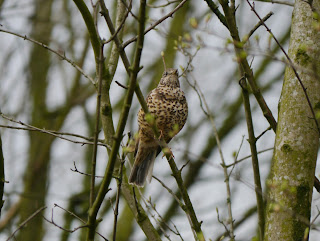 I then came across a second bird.... 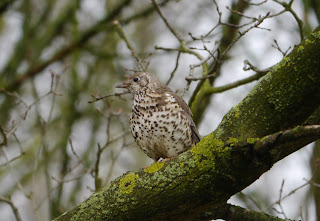 I noticed the second bird was sitting on a branch very close to what looked like a nest in a fork of a tree. Now I knew Mistle Thrush nested like this; however I really didn't expect to find an actual nest, so I was in absolute disbelief when it hopped along the branch and sat on the nest to incubate (as Mistle Thrush start laying early). 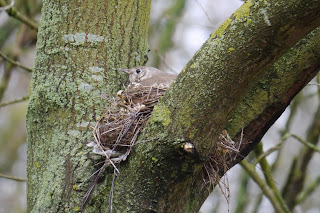 This was the first Mistle Thrush nest I have ever found, and what a way to start the BTO's Nest Recording Scheme (NRS) for 2016. There are only 70 records of this nest found on average per year, so you can imagine I was pretty made up. 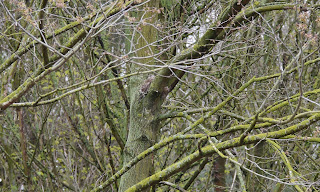 We watched the next from a distance for a while and managed to phone-scope the close up pictures.

Have any of you seen any active nests yet this year?

Linking to Wild Bird Wednesday
Posted by Findlay Wilde at 21:37