Droning on About Anglesey!

Last Wednesday the whole family was off, so we decided it would be a good idea to go and visit Angelsey for the day. Now the island is at least 2 hours drive from where I live, so we set off early. I was a bit concerned visibility wise on the way there, as the car was surrounded by thick fog which wasn't too good. However, thankfully within half an hour the fog gave way to some stunning morning sunshine. The weather looked great for the rest of the day.

Our first port of call was a stunning little beach just off Trearddur Bay called Porth Dafarch. It has a wonderful headland for attracting migrating birds and is brilliant for sea watching. Amazingly out at sea it was flat calm, you could make out some of the birds close in with a naked eye, and picking things out and identifying them further out at sea was relatively easy. 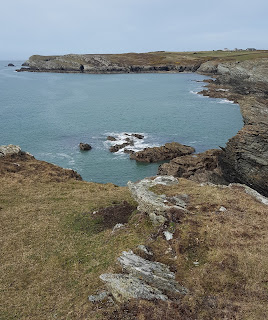 So a half an hour sea watch produced 2 Shag, 4 Lesser Black Backed Gull, 38 Herring Gull, 1 Arctic Tern (first of the year for me), 5 Manx Shearwater (2 flew very close in, giving extraordinary views). It was amazing to see them gliding over the water as they do. I also noted 100 Guillemot and Razorbill and a single Gannet. 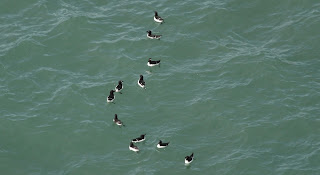 The headland itself produced some good birds as well. Whilst taking a break from sea watching I trained my scope on a color ringed Chough which showed really nicely for everybody. 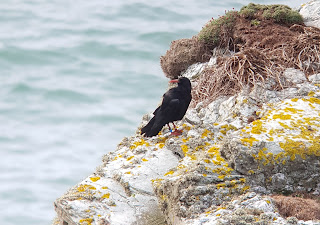 The smaller passerine birds of note included 4 Rock Pipit, 4 Stonechat, 6 Wheatear and the 'Alba' race of our usual Pied Wagtail: the White Wagtail. 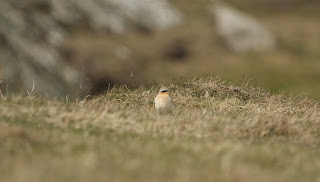 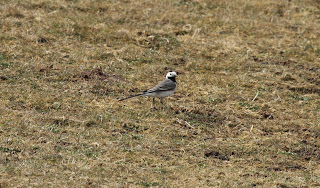 After a nice session of birding we decided to do a bit of 'Go-Pro-ing' on the beach with Harley, and managed to get some footage for him. We stayed on the beach for a while, before heading off to RSPB South Stack to see the huge sea bird colonies present on the cliffs. It was amazing to see all the auks on the cliff and we even managed to see 3 Puffin sat on the sea!!! 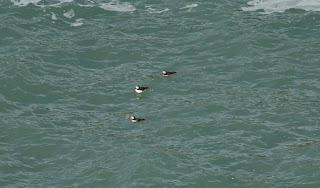 I must also congratulate a member of RSPB staff for grounding a drone that was being flown too close to the breeding colonies on the rocks. I wonder when drones will have to be licensed. 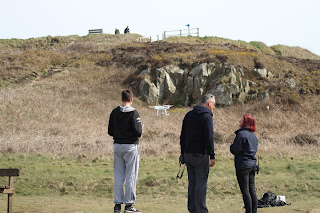 We got a further 3 Manx Shearwater whilst sea watching there and that took total up to 8 which is quite good for this time of year. We also saw another Gannet and a few more Chough flying by. 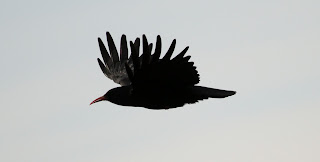 By this point it was getting a bit late, however before we left for home, we had one last look at that Porth Dafarch again, only managing to see a few Wheatear this time. 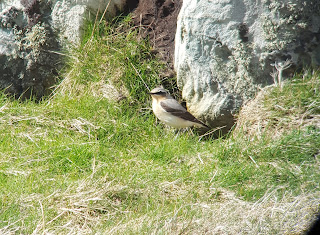 I did also leave a message behind on the beach to support the #Think500YearsAhead thunderclap. 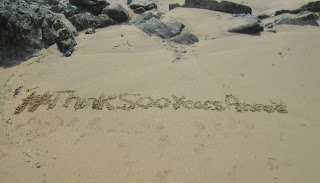 Only 3 days left to sign up, which you can do by clicking here.
Posted by Findlay Wilde at 19:59