My personal journey with hen harriers started a while ago and has led me to see some amazing things and meet a group of very inspiring people. But before I look back on this journey, let me introduce you to the star of this blog post "Finn". Finn is the first Hen Harrier chick to be satellite tagged in England this year. 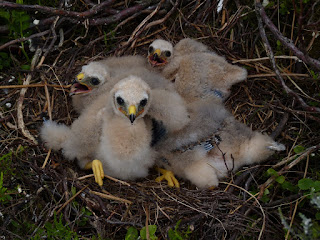 Finn with her 3 brothers


I will of course come back to Finn a bit later on in this blog.

I can still vividly remember the very first time I saw a hen harrier. It was high up on the North Wales moors. The fine rain and mist covered my face in water and the low cloud limited my views over the vast landscape.  Despite the rain and mist, I resolved to walk even further up the moors, but my plans to keep going suddenly came to an abrupt stop. A grey ghost, elegant and effortless, glided past within 10 metres of where I stood. He soared effortlessly on the wind, appearing and reappearing through the sloping hills. 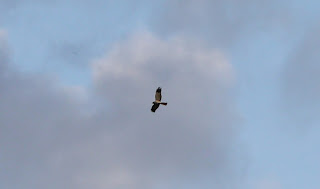 I was simply captivated and inspired by such a spectacle of nature. I had to know more about this bird.

As a young conservationist, I was learning all the time about the problems facing British wildlife and was shocked, upset and angry that the bird I had been watching was on the brink of extinction as a breeding bird in England.

The more research I did, the more I learnt. These birds love this land, just like we all do. As with all nature, I saw these birds and these lands as our natural treasures and my natural inheritance.  But these natural treasures were being stolen from us. They were being stolen from us by what I called the “Pirates of the Countryside”. These pirates of the countryside appeared to be driven by selfishness, greed and ignorance and came in many forms; land owners, politicians, developers, councils, local authorities and even retailers.  Although I must say there are many excellent and pro-nature people in each of these groups as well. It was just the small numbers of short sighted people that sadly were having such a massive negative impact.  No-one could argue that something had gone terribly wrong if a bird like the hen harrier had been pushed to the point of extinction in England.

Surely this couldn't be happening, but it was, and it was a very real situation. The more information that was shared by respected organisations and individuals, the more I made it my goal to raise awareness and try to reach the people who had never even heard of a hen harrier.

So in 2014, I began “Project Harry” to help the RSPB’s Skydancer project. Harry, a 6ft hen harrier, started off as a tiny thought in the back of my mind. He was built and bought to life for a local scarecrow competition in our village and perched on the roof of our house for 4 weeks. 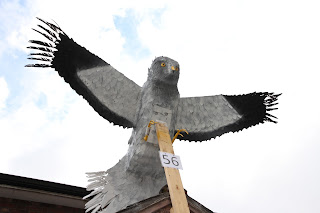 Posters were put up telling people all about the persecution of raptors.  Harry went on to win the competition and the prize money was given straight to RSPB’s Skydancer Project.

I quickly realised that Harry was reaching people who hadn’t heard of a hen harrier before and who were equally shocked to hear about the near extinction of such a precious bird.  So Harry went on a tour in 2014 to inspire people up and down the country, visiting the first Hen Harrier Day in the Peak District, Birdfair, BBC AutumnWatch, Beacon Fell and then spending the winter at RSPB Burton Mere on the Dee Estuary. 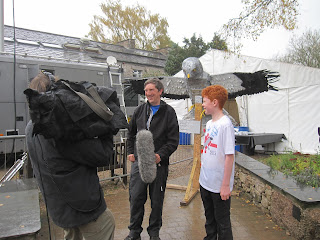 Hen Harriers attempt to move from their upland breeding grounds down to places like the Dee Estuary on the Wirral to spend their winter, and it can be a good place to see one. The RSPB do monthly “Skydancers on the Dee” events throughout winter to raise awareness about hen harriers and I volunteer there every year to talk to passers by about the plight of hen harriers and when possible show the birds to people through the scopes. 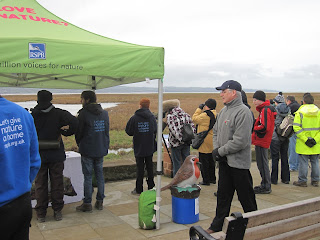 It’s hard sometimes to explain the difficulties faced by these birds, but try thinking of hen harriers as a massive dot to dot picture puzzle.  Think of each dot as one of our much needed hen harriers. We need thousands of dots to realise the picture we want. But the dots keep disappearing. Sky, Hope, Chance, the 4 males that went missing, forcing the females to abandon their nest.  All those vital dots erased.

The end picture we all want for Hen Harriers doesn’t look good at the moment, so we have to ensure we get all the future dots in the right place.  Each connection line between the dots is all the hard work going on to protect them and stop their persecution, but it’s frustrating that our connection lines seem to be getting longer and longer.  Each plotted dot for the future represents hope and our efforts and successes, strengthening the picture we all want to see.

I can’t always campaign as hard as I want to as school often gets in the way, but that’s where others come in and we can all help connect these dots.

Last year I made a short video to try to persuade politicians to take much more notice of the environment and make sure it was at the top priority of every decision made on the run up to the general election. Around the same time the green energy company, Ecotricity, launched their “Young Green Briton of the Year” competition.  So I thought I would enter the competition and sent them the video. I was delighted to find out that I was a finalist in the Nature category, but what I didn’t realise yet was how our relationship would grow.

As a finalist I was invited to the annual WOMAD music festival where I was speaking on a panel about the problems facing the environment and how to make it better. Anyway, during this process of being at the festival, a remarkable opportunity came up which I grasped firmly with both hands.

One of the people on the panel supporting the Young Green Briton’s was the founder of Ecotricity; Dale Vince. I thought being there with the main people from a big green energy company, doing brilliant events to promote young people interested in the environment, was a chance to explain and discuss the plight of hen harriers.  It was also an opportunity to ask Ecotricity to get involved and maybe help with some funding for satellite tagging of the 2016 chicks.

The Ecotricity team, but especially Dale Vince and Helen Taylor were brilliant. They jumped at the chance to help.  I took the Ecotricity team to the Wirral in April this year to watch Hen Harriers on the Dee; it was the first time they had seen one. 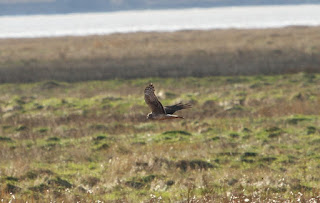 Throughout the last 12 months we have all worked together, along with the RSPB Skydancer team, and the result is that “Finn” who you met right at the start of this blog was recently satellite tagged and became the first hen harrier in England to be tagged this year.

You will be able to keep up to date with the progress of the tagged chicks on the RSPB's website. I will be following Finn’s journey very closely, I can only hope that it is long one.

Linking to Wild Bird Wednesday
Posted by Findlay Wilde at 20:53