After loving every minute of competing in Patchwork Challenge last year, I couldn't wait to get back out on my patch, Winsford Flash, to see what 2017 had to bring.  January always starts well, with new birds being added to the patch list during most visits. As I write this blog, my current patch stats stand at 75 species which equates to 76 points (with some of the expected species still to be seen).

This year has really started with a bang! On the 22nd January, in some pretty awful conditions, a large, ghostly gull come into view through the scope. It was in fact one of the only gulls on the water. I immediately thought "white winger".  I couldn't believe it, could it be the first record for the site of any white winged gulls!! After a few more seconds of viewing this beast of a bird, I confirmed the identification as a first winter GLAUCOUS GULL!! Birding in torrential rain and hail isn't the best, but it was certainly that sudden heavy shower that grounded this gull for a short time. 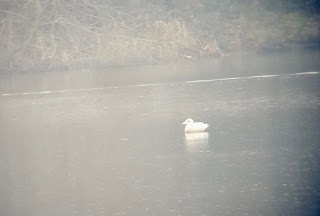 I immediately I did my best to fire off a couple of record shots, and literally in the nick of time. Within a heart stopping time phase of 60 seconds this enormous, stand out gull took to the air and headed off west. I phoned up a couple of other people who visit the site regularly, however sadly this bird eluded them. Birding really is hit and miss.

According to the 2007-11 BTO Bird Atlas, the winter distribution of the Glaucous Gull in Great Britain has increased by 9% since the 1981-84 survey.

Every morning, hundreds if not thousands of large gulls pass low over the flash, presumably on the way to feed at Maw Green Tip at Sandbach where white wingers often occur, so who knows what might drop in next.  Again, it just goes to show you don't have to travel far and wide. Putting your efforts into a particular patch will reap rewards.

Linking to Wild Bird Wednesday
Posted by Findlay Wilde at 20:24