This Winter, the UK has and is being lucky enough to be inundated by large flocks of Waxwings that  are heading across the North Sea after a poor crop of berries, their main food source, in the northern forests in places such as Russia and Scandinavia. This year Britain has had a bumper crop of berries therefore it would seem these Starling sized, sandy brown birds are making a wise decision. This Winter has been particularly good for seeing these striking avian creatures;  however they do visit the UK every Winter in varying numbers, so it's always worth keeping an eye on the berry trees every year just in case.
The main bulk of these Waxwing flocks are to the North of the UK in places such as Aberdeen and Carlisle where flocks of up to 200 - 500 have been recorded. However as the berry crop starts to thin out in these places, the Waxwings are now making their way further south to Northern England and the Midlands with small numbers even further south than this.  I have been waiting (impatiently) for Waxwings to turn up in my county of Cheshire, but of course I couldn't wait that long to see them, so on the last day of 2016 I headed off to North Wales to look for a flock of about 60 birds that had been reported at Wrexham Industrial Estate. 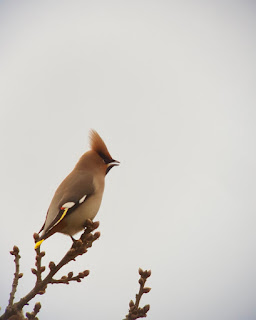 As soon as I arrived, I immediately locked on to the target flock of birds that were perched above a very vibrant Rowan tree absolutely teeming with berries. The adjacent tree of the same species had been completely stripped already. 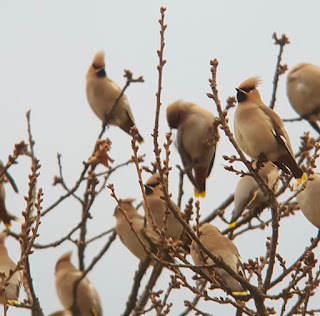 Now it isn't just Waxwings that feed on berries, there are many other species of bird that rely on berries as an important food source such as Redwing, Blackbirds, and Mistle Thrushes, the latter being very territorial as you can hear in this short video taken at Wrexham.


During the first view days of 2017 yet more Waxwings have been reported and this time some turned up in Barnton in Cheshire (just 15 minutes from home). The flock was reported as 20 or so, however on my visit myself and a few other good birding mates counted up to 38 individuals which is quite a large increase in the space of a day. 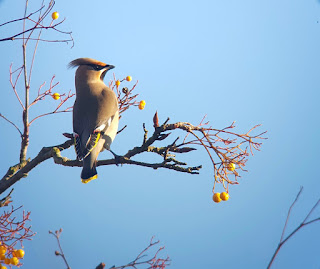 Seeing these birds has been a great end to 2016 and start to 2017 and I'm sure I'll be tempted to look for more as the Winter continues. 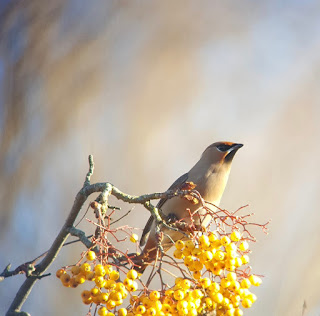 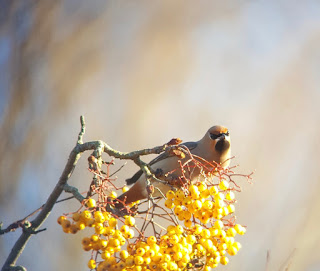 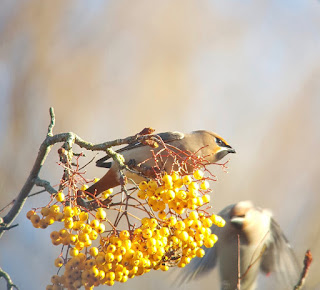 So keep an eye out on your berry bushes/trees, you never know what might turn up!

Linking to Wild Bird Wednesday
Posted by Findlay Wilde at 17:18