"Waiting around for something to change can be a really bad habit. How long have you been here? Check the time, don't wait, make the change happen now."

A few months ago I received an email from Sir John Randall (the Prime Minister’s newly appointed special adviser on the Environment) inviting me to meet up with him and a small group of other young environmentalists at 10 Downing Street. What an opportunity.

So on 23rd November I travelled down to London for the meeting with an open mind on what to expect.  I spent the journey making notes on all the points I wanted to raise, distracted only by the wetlands just before we passed through Stafford station.

Arriving at Euston I felt the familiar buzz of energy that hits as soon as you step off the train in London.  We had a few hours to spare, which we spent with some good friends, and then it was time to walk down that famous street.

The other people in the meeting were Josie Hewitt, Georgia Locock and Jordan Havell.  We met with Sir John Randall in The Study (Mrs Thatcher's old office) at No 10. We talked about many environmental issues during that time and discussed the changes that are desperatley needed.

As a follow up to the meeting I emailed a thank you to Sir John and a summary of all the points we discussed.  He replied in detail and it is some of those communications that I would like to share with you here. There are of course many parts of the conversation that are confidential and that I will not be publishing, as it could jeopardise Sir John's chances of getting the changes he is pushing for.

So here are parts of the notes I shared with Sir John, and some of the responses I received from him (in italics) that I will share.  I was reassured about just how many ways in which Sir John is trying to tackle things, and I am sure more of these will be made public in the months to come.

1. Driven grouse shooting
I was reassured that you see this as a serious issue. The shooting industry must put the effort in up front and prove they are willing to change things.  It would be great if you could get the removal of gun licenses made law for anyone found guilty of shooting raptors. Please could you get a meeting to re-look at the Hen Harrier plan as we both know that brood management is not going to work. DEFRA need to step up to the mark and do more to prevent wildlife crime.

As I hope you appreciate, I personally take the issue of the continued illegal killing of birds of prey very seriously. It is of course something not exclusively associated with grouse moors and persecution also occurs elsewhere. It is high up on my agenda as it is totally unacceptable.

There are other environmentally harmful practices associated with some moorland practices that also need to be addressed. However there are positive signs within some elements of the shooting lobby that they now recognise that urgent changes in practice need to happen and a culture change is required to ensure that the criminal element is exposed and brought to the law.

One of the big problems is the difficulty in obtaining prosecutions and indeed getting successful ones. I am looking at how evidence gained on private land could be allowed. This is potentially an issue for the Ministry of Justice, the Home office and the police forces. I am proactively looking at this.

As part of this as you know I seeing how we might increase sentences for wildlife crime as well as removal of firearm licences for wildlife crime and other crimes. You all shared with me the desire to prevent and prosecute wildlife crime. As I state above the Home Office and Ministry of Justice probably have an equally important if not more important role than DEFRA in that. Ultimately the various police forces and particularly the Police and Crime Commissioners have to be made aware that this is seen by many people as a policing priority. So that’s where people can write in to their PCC to emphasise the point, anything that can be done to encourage the public to do that would be most welcome..

I share concerns about the “industrialisation” of some pheasant shoots, a view which I understand is also of concern to many within shooting.

2. Banning the use of lead shot
I really hope this can happen as habitats are getting littered with this poison.

As we discussed I have serious concerns about the continued use of lead shot which has been banned in many countries. It is currently illegal to use it over wetlands but as a recent editorial in Country Life admitted it is still practised by some. It is not only harmful to the environment but can have health concerns for some human beings who eat a large amount of shot game. I am looking into ways which could change behaviour in this regard including encouraging retailers to promote lead free game.

A potential ban on the use of peat is also something I’m looking at. In the meantime I am considering whether we can use the mechanism of levies to influence the behaviour.

3. Education
Getting the serious facts and statistics about climate change and world wildlife population declines into all subjects at secondary school. I believe that it must form part of the curriculum if we are going to get people to face up to the situation we are in.

If we are going to get people to understand about the links between our choices and the declines in world wildlife/climate change then we have to educate the masses and this must start in schools. We don't have time on our side and climate change will be one of the biggest things that impacts my generation. Could you link up the environment minister and the education minister to talk about this maybe.

I really agreed with you and the others about the need to persuade people of the real threat of climate change to our world and wildlife specifically. Education can be a key part of this but there will be a need for the teachers to be educated too. Just making it another subject to teach on an already crowded curriculum may not be the answer. I am already looking at how the Department of Education can get involved. Incidentally I am also speaking to Health Special Advisers as the natural world can provide a great deal to improve both our physical and mental well-being. I really think that are good sound economic and health arguments for encouraging participation in the natural world.


4. Re-newable energy and the need to invest more in it
I mentioned my concerns about the budget and that funds would not increase beyond 2020. I didn't get chance to get all my concerns across though. We will never find the next big re-newable solution unless we invest more into renewable energy research. The next big thing probably hasn't even been invented yet, it could be just round the corner, but it will never happen if we don't invest. Technology moves on so quickly, there must be more we can do to generate cleaner energy.

I am still concerned that while climate change is often talked about we need to continue to get the message across about how serious the situation is.

4. Strengthening the laws that protect the natural world as a part of Brexit rather than weakening them
I would have voted remain if I had been old enough, but Brexit does give us a chance to strengthen environmental/wildlife laws

As you rightly say, within the many challenges of Brexit, there are some possible big wins for the environment if we are bold enough to take them. At the moment I am cautiously optimistic that they are being taken seriously.

5. Plastics
I asked for an all out ban on single use plastics rather than the increased tax put forward in the budget.  You quite rightly pointed out that it is not that simple to ban something that is used all over the place. The trouble is we are just making the plastic situation worse and worse, and we don't have time on our side anymore.

The continued use of single use plastics is also something we are working on a great deal but I am very conscious of the need for action sooner rather than later. I think there will be much more being announced in the coming weeks and months.

6. Climate change
We talked how we can see this over a short time period in the birds now breeding in the UK and through the increase in flooding etc.  I talked about my #Think500YearsAhead campaign and how a 5 year term was not enough to change things and that a lot more forward thinking is needed. I am keen to see the 25 year plan.

I hope that you will be pleased with 25 year environmental plan when it is published, which I hope will be early in the New Year. I was interested to hear about your #Think500YearsAhead campaign. Of course the real urgency is how to start these processes and while it is easy to set targets the question is how to achieve them and how to monitor progress. Also of course we have to consider what to do if those targets are not being achieved.


I came away from the meeting feeling that Sir John Randall had really listened to us and that he had been genuinely interested in what we had to say. I feel optimistic about some of the changes that will hopefully start being made, but also frustrated at how long these changes can take to make. We don't have time on our side anymore.

Before leaving the meeting, I gave Sir John some of the "Thought Provoking Hen Harrier" cards that I had written out for some of the MPs, and I particularly liked this part of Sir John's email to me:


I gave your Hen Harrier card to Michael Gove in person today, he sends you his thanks and best wishes. It gave me the opportunity to talk about the issues – so thank you from me too. 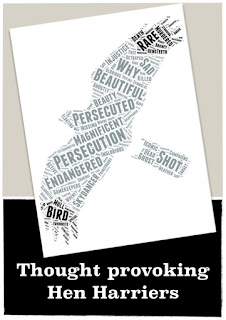