I was determined to squeeze some birding in this week, even though it was back to school. I managed to get 20 minutes in the hide, and then from my bedroom window, before it got too dark and foggy. It's amazing how much you can see and enjoy in such a short amount of time. 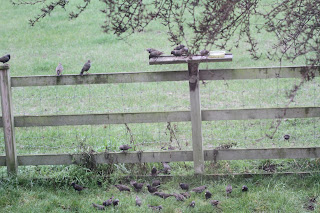 I counted about 35 Starlings, the most I have ever had in the garden. I put some meal worms, suet pellets and mixed seed out on the bird table, which attracted loads of bird including: Chaffinches, joined by a Brambling (a first for the garden), plenty of House Sparrows, Goldfinches, Jackdaws, Magpies, Robin, Collared Doves, Wood Pigeons, Blue Tits, Great Tits, Coal Tits and a single Reed Bunting. The Jackdaws were once again feeding off a seed feeder in my next doors neighbours garden.  They must have been watching and learning from the Sparrows. 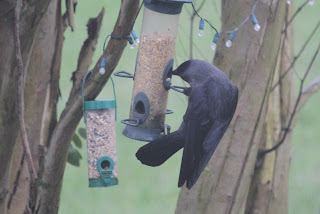 A Blue Tit has been sussing a next box out for the Spring/Summer to nest in. I am just hoping it will nest, since I have never had a Blue Tit nesting before (apart from once, when it nested for a while then suddenly stopped nesting).  I also need to get by nest box with the camera inside set up again soon. 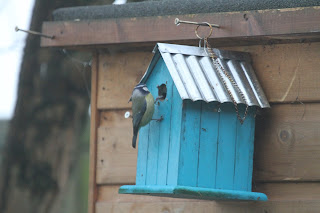 The Tits and Goldfinches are loving the sunflower heart feeder; they are on it every MINUTE!!!!!!!!!!!! And they are squabbling quite a bit even though there is plenty of food. 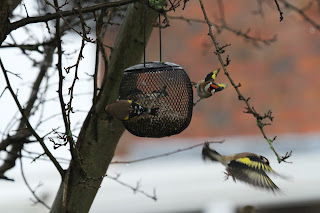 They do fight for spaces on the feeder, so there is normally only three at once, any more and there would probably be a fight. Even the Chaffinches were trying to feed from the sunflower feeder, but they kept failing. They were trying to hover like Humming Birds and grab a seed. I am going to try and video them doing this at the weekend. 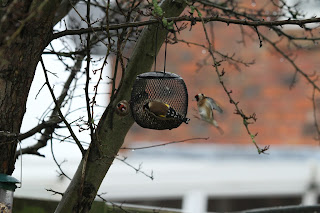 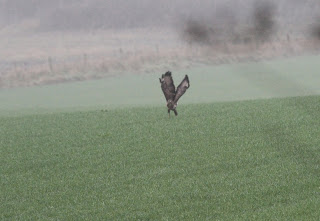 The House Sparrows much preferred the bird table than the tray on the back fence.  Maybe they didn't like being on the edge of a big open field, especially with a big raptor in it! 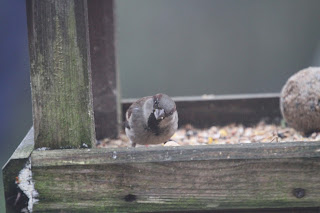 This juvenile Blackbird was enjoying the food scraps scattered across the floor by the messy Starlings. 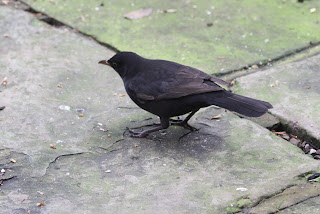 This male Chaffinch unfortunately has bumble foot, which occurs quite commonly on Chaffinches. He visits quite often though and seems to be doing okay. 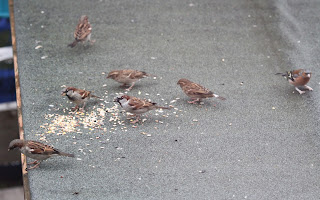 So that 20 minutes should keep me going until the weekend.