Due to various family commitments and other variables affecting my Summer off, this year I was only able to attend one Hen Harrier Day (but what a fantastic one it was). I was joined the night before by Mark and Rosemary Avery to rest up after a long drive from the Hen Harrier Day at Rainham Marshes.  This allowed a good chance to have a proper catch up after not seeing them in quite some time.

This year the Hen Harrier Day I attended was a much more local one for me at Parkgate on the Wirral.  Readers of this blog may be familiar with the site, as I have written about some remarkable high tide events there in the past.

With the help of some funding from Birders Against Wildlife Crime, we had hired a van to move our homemade grouse butt to the site to be used as stage for the selection of speakers. We were the first to arrive on site and were greeted by a Marsh Harrier quartering over the salt marsh. 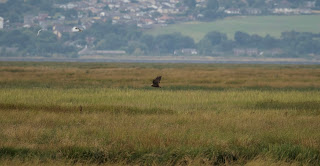 Next to arrive was Jeff Clarke who did an amazing job in organising the event and pulling everything together.  In a short space of time we were joined by Phil Walton from BAWC, the RSPB Burton Mere team, Wirral Barn Owl Trust, Record and the Cheshire Wildlife Trusts who all had stands at the event.

Once everything was set up the venue looked fantastic and showed just how much effort people are willing to put into these events to raise awareness about the illegal persecution of Hen Harriers. As people began to arrive it was good to catch up with old friends including Ruth Tingay who wrote an excellent poem for the Rainham Hen Harrier Day. 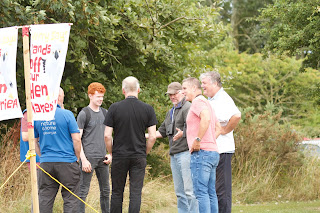 The main event consisted of 7 speakers talking about various aspects to do with the reasons we have Hen Harrier Days and the darkness of raptor persecution. The first speaker was Colin Wells (former manager at RSPB Burton Mere) who spoke about the history of the site and how it is a fantastic place to come and see Hen Harriers in the Winter and what he did as manager of the site to protect it and make it the success it is today.

The second speaker was Colin's successor as manager at RSPB Burton Mere; Graham Jones discussed why he wanted the job as manager and how he was going to continue working with everyone to protect the fantastic site for raptors and the many breeding waders.

Next up was the fantastic Alan Davies who was talking a bit about all the world harrier species he has seen, but mainly he did a brilliant job in lifting the audience in a confident and inspiring protest; addressing the people who kill Hen Harriers and other upland wildlife.  He told them that they will lose eventually, no matter how long it takes.

I was the fourth speaker to take to the stage. At previous Hen Harrier Days I had spoken generally about the illegal persecution of upland wildlife and joined the other voices in calling for an end to this barbaric slaughter. However, this time I wanted to tell a more personal story about my journey with a Hen Harrier called Finn who had her life cut short earlier this year in March. 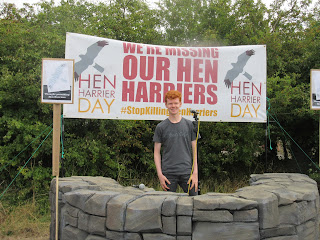 After me it was James Bray from the RSPB who had travelled all they way down from Bowland.  He gave a lengthy talk about how there should be far more upland species of raptor such as Peregrine and Hen Harrier breeding in Bowland. These species just aren't there in the numbers they could and should be in. It was good to hear true stories from the front line of raptor conservation.

Next was Dr Mark Avery. Mark as usual spoke very well and told the whole story about Hen Harrier Days and the successes of days being held elsewhere and of course reinforced the fact that we will succeed in banning driven grouse shooting one day.

Finally the selection of brilliant speakers was capped off by Iolo Williams. He also gave a personal story about how he used to go up on the moors and watch Hen Harriers as a child and how it really 'pisses him off' that people are violent enough to kill them. He left the audience feeling angry and hyped up to make a difference. 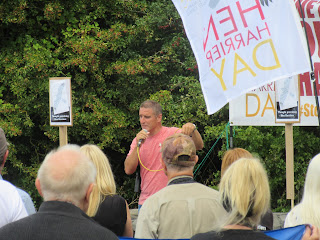 Between these talks Jeff Clarke did a fantastic job in opening the event, linking all the speeches and closing the sessions. He really reinforced the fact that Hen Harrier Days need to continue and why we were all there all. I should also say thank you to him for a thunderous introduction to my speech and all the support he gave the thunderclap I set up (which went out to 8.2 million people that morning). 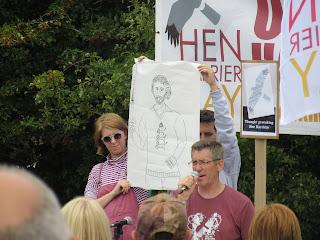 One or two anti-Hen Harrier Day people have made comments on social media about the "pointless" numbers generated by the thunderclap and how it makes no difference and means nothing.  Well of course I beg to differ. The thunderclap was signed by 1810 people, but when it was posted out to social media, it had the potential to be seen by 8.2 million people. Not only that, as I type this, almost 25,000 people have made the effort to follow the link in the thunderclap and find out more about the dark side of uplands management, something that they chose to do. To me that is a great awareness success story.

After the talks, it was time to catch up with everyone and it was really positive to hear how many people were at a Hen Harrier Day for the very first time.

A good mate of mine, Dan Gornall, had turned up for the event and after all the talks had been done we were having a good catch up. As he checked his phone news came through that a Bonarpartes Gull had turned up at Hoylake just down the road. So after a few farewells (and long walk back to where he parked his car) we were on our way to see this American gull. Sadly though, 5 minutes before we had got there the bird had flown off towards the tideline, which was a good mile out. Therefore on this occasion we dipped it, but it was great to catch up and a big thanks to him for the lift.

I was then escorted back to the Boathouse Pub where myself and the speakers and organisers of the event spent a great few hours eating together to round the day off. As soon as I arrived I was informed that, whilst I was dipping the Bonarpartes Gull, the people who had remained at the venue for Hen Harrier Day actually saw a ringtail Hen Harrier.  A fact that Mark Avery will happily keep reminding me about. 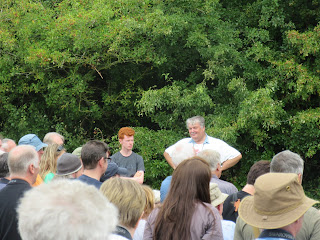 All in all it was another very inspirational Hen Harrier Day. A huge thanks to Jeff Clarke for making it happen. At least 300 people had turned up for this event making it the highest attended Hen Harrier Day his year, which couldn't have happened without Jeff's hard work and brilliant organisation.

So who will be coming to the 5 year anniversary Hen Harrier Day next year at Derwent Dam?