I have not been able to blog or go birding for a while because of my SATs tests which were pretty tough but I hope I have done ok.

PART TWO: MY LOCAL PATCH SWALLOW NEST RECORDING
﻿
However, I am now out and about again and had a session after school with Alan Garner who kindly invited me to do some nest recording of Swallows nests on my local patch. We started off searching for nests and as soon as we got into the garage (where the farmer keeps his car) we found nests; however they did not have eggs. As we continued to search we decided to check a nest box with Blue Tits nesting in it. As we checked we found that the female Blue Tit wasn't sitting on her nine eggs, but they were still warm from when she had last been brooding them.
In the air the Swallows were quite busy, but when we were checking each and every nest we found it was a whole different story, hardly any of the Swallows had young or even eggs. So we are going to check again soon hopefully later this week.  Thank you to my younger brother Harley for letting me use his brilliant Swallow picture: 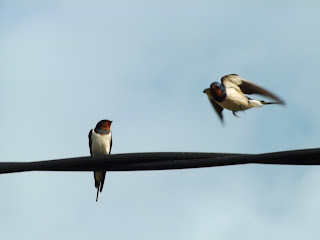 You might of known that I have Great Spotted Woodpeckers nesting beside my feeding station in secret wood, and a few days ago I went to put my remote camera up to see what was going on, and  as I got there I heard this trilling noise coming directly from the hole, I then knew the woodpeckers had chicks!!!
As I slowly backed away a flash of white and black caught my eye, the male woodpecker was approaching the nest with loads of insects in it's beak. As it was just about to go in the female flew out and the male went in and didn't come out, which gives me a big clue that they have just hatched and still need to be kept warm by the parents.

As me and my dad came away, I saw a Treecreeper with something in it's mouth, I followed it and then watched with disbelief as it went into a crack in the bark with nesting material, I had found a Treecreepers nest.

As I watched them building the nest I kept glancing back at the woody hole, but I noticed an earlier hole that had been chiseled out also appeared to have something in it. Something was shining in it, I think it was an eye reflection of a bird. I don't know if maybe it is another woody nest. I am 99 percent sure it was brooding eggs or very, very young chicks although it surprises me that two pairs of woodpeckers would be nesting so close to each other.

By the way I want to say I have a special ringing blog coming up for you very soon and a great "guess the bird" quiz for Tuesday night......
﻿
Posted by Findlay Wilde at 20:17