Awesome Saturday & The Herald Turned Up!

On Saturday I was finally back at ringing again after being sick last week. We caught some great birds and saw some great birds too. Quite a few birds were active, as in flying about, and early in the morning I got to watch a fantastic "clattering" of Jackdaws flying from the trees awaking from a roost.

However it wasn't just birds that impressed on the day. As we had finished processing a group of birds we had caught, a biggish moth flew across us and firstly landed on the leg of our ringing table then flew on to a Bracken stalk, and as the moth came into the light I soon realised it was a moth called The Herald; a truly remarkable moth. It was the first time I had ever seen one and was surprised to see it in broad day light.

When I first identified it and knew what it was, I first thought it was really rare but after some careful research at home I found out that it is actually quite a common moth and it's flight season ends near the end of November. 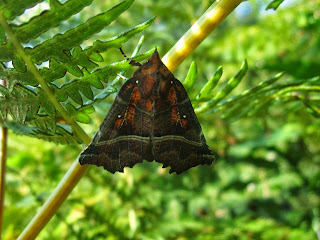 Again before I move onto birds, it wasn't just moths and birds that caught our eye, there were a few nice butterflies knocking about including a beautiful Brimstone which was rather twitchy and sadly I could not get a photograph, but Peter got this cracker: 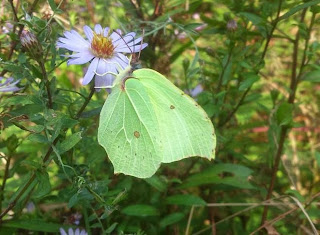 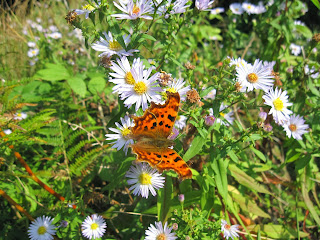 Here is one more photo of The Herald!!! (No not you Trevor)! 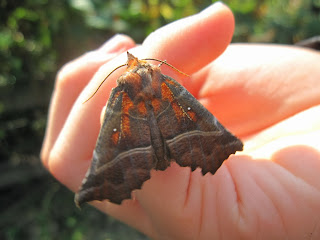 Finally, moving onto birds. During the session we were watching a noticeable migration of Skylark and Meadow Pipit; at least a few hundred Skylark flew over and a little less Meadow Pipit. The birds migrating over seemed to be flying quite low over us (especially Meadow Pipits) and by the end of the session we had caught 8 Meadow Pipits one of which had 5 nasty ticks just below the eye; Peter was able to carefully remove the ticks with a lot of careful concentration. The five round black lumps under the eye on the photo below are the ticks (if you click on the picture is goes larger). 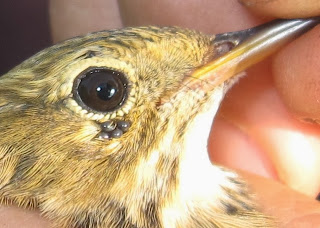 The place we were ringing at had a lot of Sparrow Hawks and during the ringing session I saw a phenomenal number of 8. We didn't just see these fantastic birds flying over but we also saw them chasing a Great Spotted Woodpecker and two of them then started mobbing a group of four Buzzards.

Another great migratory bird we saw whilst ringing was Pink Footed Geese high in the sky, the first of the year for me.