As you know from recent blogs, I take part in a Blackcap RAS with my ringing group, however last weekend we started our 2nd RAS on Swallows.  Whilst catching the adult Swallows, we were also ringing the juvenile birds from the nests and found that they were slightly behind this year, with most nests with egg clutches of 4 or 5.  However four nests did have young, but only three broods were ringed, due to the fourth having bigger/older chicks. In the end we ringed a total of 9 Swallow pulli. 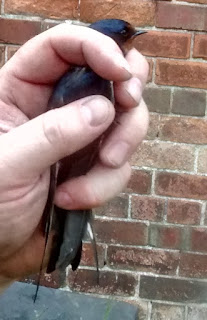 We kicked the RAS off with a great start catching 27 adult Swallows, with pleasing numbers of re-traps, including 14 birds that were ringed as adults last year at the same site. It's great to know good numbers of birds are returning to the site. We also re-trapped a bird that was ringed as an adult from 2 years ago in 2013.

This adds up to 15 re-trapped Swallows, out of the 27 adult birds caught.

I find it amazing that these returning adults have been back and to from Southern Africa travelling 1000s of miles - their journey must be tough and no doubt many don't make it.  And interestingly, I wonder what they have thought of our weather when they got back here, its perhaps not been the best for them and they have been working harder to find the insects.

Last night we had the National Bird Vote results and if you didn't already know, the Robin came out on top as the winner - but was it a worthy winner?  And also in case you didn't know, the Swallow is the National bird of  Estonia and Austria! Oh, and one last thing, didn't the Hen Harrier do well to make it into the top 10.

Tomorrow's blog is another in the series of "13 Years Wilde" but who's it going to be?
Posted by Findlay Wilde at 17:49