The next guest blog in the 13 Years Wilde series comes from Chris Packham. On his Twitter profile it says that Chris is a "Naturalist and BBC broadcaster", but I think he is so much more that that. He is someone that is willing to speak out and stand up for nature and encourages others to do their bit to make a difference. For example. he has done lots of work for Hen Harriers and gives up his time to campaign for them. Chris is also extremely active in fighting against the Malta massacre of migrating birds.  I find Chris to be an inspiring, knowledgeable, funny and encouraging mentor to me and other young naturalists I know.  Be ready for another brilliant read, and I know you wont be surprised about his interests when he was too was 13 years old. 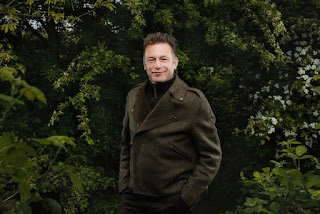 Thirteen . Nineteen seventy four . The three day week, IRA bombings and ABBA, it couldn’t be worse. Except that I had a bike and all of Hampshire laid out in front of my muddy tyres. Mine was a world of birds nesting, grass snake catching and visits to the Natural History Museum. In between finally realising that I might have to concentrate on my lessons and pass a few O levels and trying to kick a ball straight and increasing my squadron of Airfix Spitfires. I got an air gun for Christmas and a Subbuteo set for my birthday.

I’d just discovered birding, had some very cheap bins and didn’t know anyone else who was into it at all. So I’d go out on my own, with my Heinzel, Fitter and Parslow stuffed in my pocket and try to find new species. Of course that was easy at first and I remember my first Whitethroat, Grasshopper Warbler and nearly bursting when I saw my first roding Woodcock . I wont describe what happened when early one morning I wandered into a barn to find a brood of owlets lined up on one of the beams all staring at me!

In fact I was very lucky as I told my biology teacher about them and then we cycled back to the barn once a month, every month for three years to collect the pellets produced by the roosting and nesting birds. The following weekend he’d bring the dried pellets round and we’d meticulously go through each one counting the numbers of voles, mice, shrews . . . and once a bat . . . and once a dormouse, that the birds had consumed . It was my first ‘real data’ and I drew many graphs, bar charts and pie diagrams . Needless to say I still have them, they are fastidiously neat and then and now were treated as real treasures . This was my first foray into science and I was tremendously excited by the idea that we could discover something new. Sadly the project came to an end when the barn was converted to a home for humans, a familiar story, and one amongst others which awakened an awareness in how most people show scant regard for our wildlife .

But aside from my budding birding, snakes were still a big part of my life at thirteen and Grass snake and Adder catching expeditions were a priority whenever the weather permitted. I had a large custom built vivarium in the garden from which, I’m sorry to say, there were many escapes! My bedroom was lined with tanks holding exotic species (many more escapes) and my skull collection was beginning to outgrow its shelf space. There were quite a few things hidden under my bed which were smelly and finally evicted by my parents, mostly bits of recovered road-kill, the passing of the putrefying Badgers foot was particularly painful – such amazing claws !

It was also around this time that I got into watching ‘Horizon’, ‘World About Us’ and ‘Chronicle’ documentaries on the BBC but not if it was still daylight, that was something which could never be wasted, there was always somewhere new to go, something new to see, something more to learn. I now make science documentaries but I still don’t watch them if its daylight outside .

And then I saw David Bowie singing ‘Rebel Rebel’ on Top of the Pops and something else dramatic happened. Its my ringtone, which says something . Being thirteen wasn’t all brilliant but as it turned out it was quite important in the long run.