My role in volunteering was to engage with the public; finding out how far they had traveled for the Wader Quest event and if they had come because of the event, but the best bit of the role was engaging with the people who aren't so knowledgeable and pointing out how important the Dee Estuary is for birds, especially waders.

The man in charge of me was Kevin Feaney, who I know through ringing.  He works for the Cheshire Wildlife Trust and invited me along to help out, so I have to say a big thank you to him. It was quite a high tide yesterday, and the wind pushing in made it even higher; it wont surprise you that we all got totally drenched! 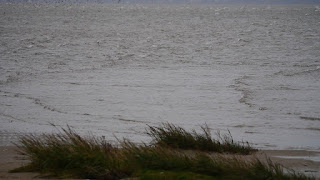 Kev and I had arrived early, so before we started to set the gazebo up,  he decided to give me a tour of the reserve at Red Rocks.  It was really interesting to see how it came about and the work the wildlife trusts has been doing, as well as the history of the site. I also got to meet the reserve manager who was really interesting to talk to. We spoke about how he is going to manage the site in the future, and about the successful work he and the Wildlife Trust have done for species like natterjack toads. It was also great to see Elliot Montieth again. 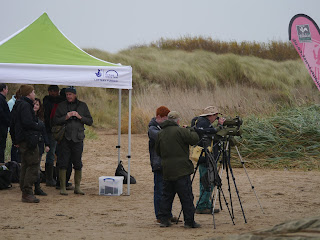 Because of the terrible weather,  not too many people turned up; however the few of us that were volunteering were rewarded with some great birding, including over 100 Brent Geese, a Long Tailed Duck, Goldeneye, Common Scoter and a fantastic murmaration of thousands of wading birds including Knot and Dunlin. I was hoping for a blown in Leach's Petrel, however the winds weren't strong enough on this occasion. 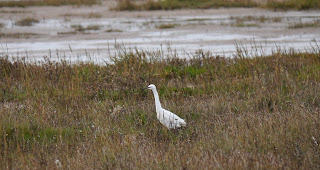 A brilliant experience and for those of you who couldn't get there, here is a short video of the wader murmurations: