About a week ago now, I came across a bird in the garden that I had only ever recorded once before (and that was quire a few years ago now when it was very cold). So it was a delight to see a female Brambling feeding on the tray of our large sunflower heart feeder, travelling in with the mixed flock of Goldfinch, Chaffinch and Greenfinch. 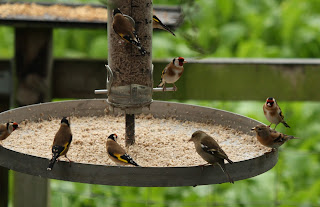 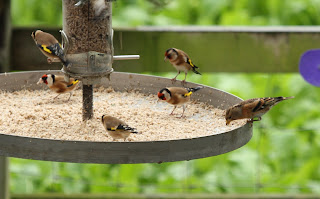 This particular bird came in to the garden after the first real frost of the year last weekend, and stayed for a couple of days. However, I haven't seen it since, so I think it was that snap of cold weather that brought it in to feed in the garden. 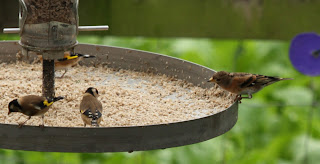 Bramblings in the UK are migrants, they winter here south of the breeding range and in varying numbers depending upon the availability of beech mast, which is there prime food source. It is only really in poor mast years, with bad winter weather that any numbers can be seen feeding in British gardens.

According to the BTO 2007-11 Bird Atlas, Brambling winter distribution has increased by 21% across England, Wales and Scotland since the 1981-84 Bird Atlas. The distribution maps also show more abundance of Brambling sightings round areas like the New Forest where there are denser amounts of beech trees.

So fingers crossed for some colder weather.