Frodsham Marsh is one of my most favorite places to go birding, not just in Cheshire, but out of all the places I've ever birded. It is in my opinion one of the best. Due to a sudden break in this awful weather we have been hit with, I decided to spend a full day at the marsh with my dad. We arrived at about half past nine and immediately noticed how flooded all the fields were because of the recent heavy rain, however the gulls were making good use of that feeding opportunity and plenty of Pied Wagtails also patrolled the edges of the floods.

As soon as we arrived, Bill Morton pulled up next to us, a great mentor to me and a faithful marsh birder (there most days).

We started off at No.6 tank in hope of seeing the Green Winged Teal, however making it out amongst so many Eurasian Teal was almost impossible due to the light which was in front of us making everything silhouetted. We decided that we should come back later and give the Teal chance to come further out in to the middle of the water rather than staying put near the daisy beds.

So our next stop was a place I've never visited before on Frodsham Marsh, and this place was Frodsham Score. We had a great vantage point opposite the Manchester Ship Canal and viewed the grazed grass and salt marsh. We immediately saw the mixed Swan flock of Mute and Whooper feeding alongside Holpool Gutter. We counted 18 Whoopers of which were all adults. No juveniles might suggest that they may not have had a good breeding season.

After further inspection of the score we soon picked out 2 Great White Egrets and numerous Little Egrets scattered all across the edge of the tide. Also on the tide line were hundreds of Canada Geese with a few Pink Footed mixed with in them. Sadly there was no sign of the 2 Dark Bellied Brent Geese that had been seen the last couple of days. Due to the visibility being so good we all got a great panorama of the whole of the score.

And one of the main reasons we were here was because of it being a relatively high tide, so we were all expecting a good show from the wading birds, mainly Dunlin (my phone video will only play sideways when uploaded, does anyone know how I can rotate a phone video).

Before all that action kicked in, we were joined by Frank Duff, also a regular birder at the marsh. We all stood together despite the cold, and waited for the Dunlin to rise in the air, and when they did it was utterly amazing; at least 15,000 birds were in the air, and performed something called the Mersey snake where they murmurate in a snake like shape because of the sheer quantity of the birds. This spectacle carried on for another hour at least before the birds finally settled as the tide retreated. I also learned that when huge flocks of birds are performing in the air you often see them twist and turn and at the same time see the flock going dark and lighter colors, this terminology is called stroboscopic.

As the tide continued to push in, it seeped onto the edges of the score, pushing all the birds in as well and allowing some great views of a Merlin and all the wading birds.

After a great proportion of the day spent at the score, me and my dad decided to head back to No.6 tank in search of the Green Winged Teal. When we arrived, most of the Teal had retreated back to roost in the daisy beds, however just before we were about to leave some very kind people pointed out that there had been a Short Eared Owl around this area. 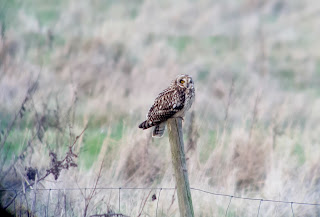 We soon latched onto it and found that there was not actually one but two Short Eared Owls quartering no.5 tank, putting on the best show I have ever seen them do. An absolutely incredible experience, and I also managed to get some great phone scopes. 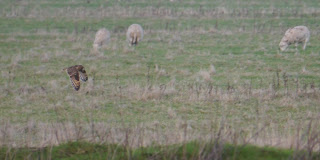 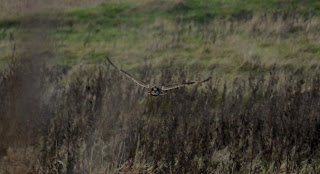 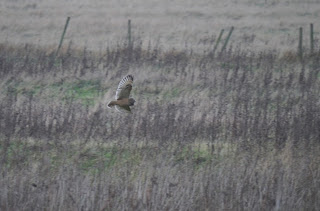 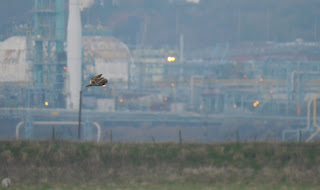 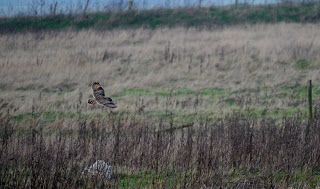 I got 6 species of bird of prey today including, Kestrel, Buzzard, Short Eared Owl, Peregrine, Sparrowhawk and Merlin. 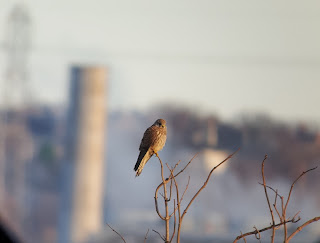 By the time we left it was getting onto 3:30pm. I must say a massive thank you to Bill for giving me such a great day at the marsh and I'm sure I'll be back down there before the New Year with more great bird species to tell you about.

I will leave you with a short video of the two owls.