The next blog in the 13 Years Wilde series comes from Andrew Fulton.  I'll get straight to the point, without Andrew, I may never have started blogging. I met him by chance when I was 10 at Anderton Nature reserve with my dad and we all got talking about the birds and wildlife we had seen; Chiffchaff, Willow Warblers, Gropper and the odd wader such as Common Sandpiper. Andrew gave me the time of day and was very happy to answer my questions and didn't just talk to my dad. We had a chat about loads of wildlife things and Andrew said that he was going to mention me in his blog. I said thank you, but I didn't even know what a blog was back then. When we got home from the walk I looked up Andrew's blog and that was it, I decided I had to start writing. Andrew has been really supportive and encouraging ever since then, and he will always be very important to me for the kick start he gave me with nature writing.
------------------------------------------------------------------ 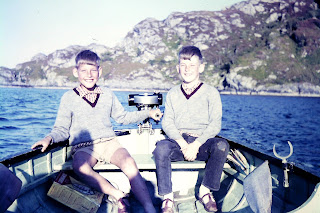 Andrew on the left with his brother Colin

I started watching the birds in our garden when I was just 8 years old... I had been to a friend's birthday party (1964) and he'd been given a bird table that came on offer with birdseed called "Swoop". His feeder had loads of birds feeding on it and I wanted one, my birthday was only a couple of weeks later and I got one. I was also used to handling birds in those childhood days, rescuing trapped birds in the nets covering my Dads strawberry beds. We lived in Sandiway a village just a few miles from where Findlay lives now... and just across the road were some fantastic woodlands. Kennel and Petty Pool Woods were our playground with wildlife a plenty and in the days when children just ran wild without supervision... "be home by 7o'clock or you'll get what for!", day's spent catching tadpoles and newts and bringing them home to show Mum. Minnows and Sticklebacks in jam jars were our Goldfish... wonderful days. At the age of 13 my life seemed fantastic... a couple of years earlier when I was 11 my parents took us (me and my younger brother Colin) to the Earls Court Boat Show in London, and Dad bought a yacht. 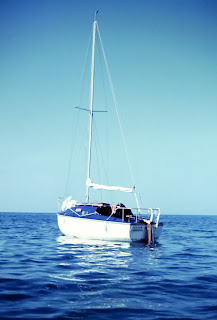 For the next couple of years our weekends and school holidays were spent in North Wales. The yacht was four berth, named Scaden (Gaelic for herring) and about the size of a caravan, we also had our own little dingy to play in. The boat was moored at Porthmadog. In the harbour there is an island made from the ballast dumped by ships which were then loaded with slate from the local mines. Ballast Island was our very own Treasure Island and we had it all to ourselves, as the local kids couldn't cross the water. We camped out, fished for our tea and searched for broken clay pipes discarded by the old sailors. The bird I remember most from those days were Oystercatchers and there were loads them.

We also saw dolphins while out sailing but the most memorable experience I had was one summer day on my brothers birthday (21st July). It was really calm as we dropped anchor off the stony beach between Criccieth and Black Rock Sands. We had fished for mackerel as we sailed there and were gathering driftwood to build a campfire to cook our supper when suddenly the seashore became a frothing mass... thousands of mackerel were thrashing about by the shore which I know were spawning. I would love to experience the whole episode again with video camera in hand it was amazing... all we did then was scoop fish after fish into buckets by hand and we caught loads... even taking them door to door around Criccieth the next day selling them to the locals (even the local chip shop bought some).

These were highlights of those days but sadly by the time I reached 13 my Dad was quite ill.

My brother and I spent the summer of 1969 in Scotland (our parents were both from Glasgow) on the island of Great Cumbrae just across the water from Largs. We stayed with family in the same house Dad stayed in when he was evacuated from Glasgow during the war (he served in the Royal Navy in Ceylon (Sri Lanka) before the war ended). We had a great time, played golf, cycled around the island (10 miles) and saw all sorts of wildlife (there is a famous crocodile near the harbour) the Crocodile Rock was first painted in 1913 before the First World War. 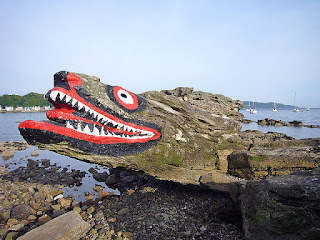 Another memory from this holiday was hearing the Rolling Stones singing "Honky Tonk Women" for the first time... it's funny what memories come flooding back while reminiscing.

Unfortunately my Dad passed away in 1971 aged only 44 (I was 15) but when I look back I had a wonderful and quite privileged childhood with some wonderful memories.

I must add I am £35 out of pocket after having to purchase a digital scanner... all Dads photos are slides. The scanner has enabled me to convert them into digital images, much to the delight of my family, they had been gathering dust in the loft for years. Mum is now 84 years of age with an Ipad and is delighted. 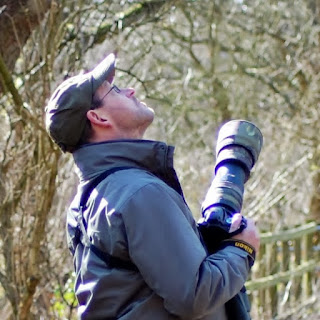