The next guest blog in the 13 Years Wilde Series comes from Alan Davies, one half of the Biggest Twitch team (with Ruth being the other half).  Alan and Ruth have been all over the world bird watching and in 2008 they set a new world record for the highest number of birds seen in a single year; an amazing 4,341 species.  I have bumped into Alan all over the place including Birdfair, Hen Harrier Day and at Parkgate.  Alan is always fascinating to talk to and we often share notes and sightings on the North Wales birds we have seen. 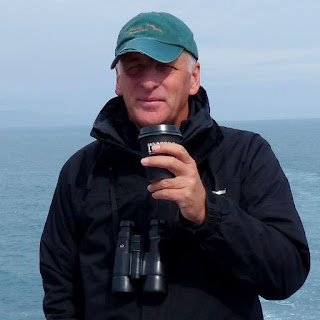 Being a teenage birdwatcher – 1973

By the time I was a teenager I was already well and truly hooked on birds and everything to do with birds. Birthday and Christmas present choice was easy for my family – anything to do with birds. It was on my thirteenth birthday that I got my hands on a “real” pair of binoculars, a pair of Zeiss Jenoptem 8x30’s. Prior to this I had been using some silver-coloured Boots 10x30’s which were pretty awful to say the least. But my Zeiss were the real deal and if you find someone who still has a pair and take a look, they still hold up remarkably well with today’s optics.

I grew up in Conwy town on the North Wales coast and luckily our house was outside town on the Sychnant Pass Road; in front was a large field and beyond that Conwy Mountain – the perfect place for a young birdwatcher to hone his skills. I would spend a huge amount of time on the mountain looking for birds and learning how to identify them, or at least trying to! In those days I was firmly in the closet as far as birdwatching was concerned; it was not cool to be a birdwatcher at school. Hardly any of my friends knew I was obsessed by birds, so most of my birdwatching was done alone. I don’t think I really minded this, I was very happy to get out and lose myself in watching birds. Home life was not particularly happy so any chance I got, I grabbed my binoculars and headed for the mountain.

My school, Aberconwy Comprehensive, overlooked the Conwy Estuary and several classrooms had panoramic views over the mudflats and saltmarsh, so you can imagine how often I was told off for “day-dreaming”. Of course I was watching birds. Looking back at my note books for those days I still had a lot to learn: those flocks of Tufted Ducks I noted on the estuary were almost certainly Wigeon!

Our summer holiday that year was to the Scottish Highlands and I was very excited about all the birds that I might see. One of my favourite bird books at the time was the “AA Reader’s Digest Book of Birds”, a large tome with lovely paintings of the birds. This book also had little maps showing where each species occurred, the only book I had that showed where to look for each bird. I spent every possible chance in the weeks leading up to the holiday looking at those tiny maps and dreaming of seeing lots of new birds that could only be seen in the Highlands of Scotland.

Finally the big day arrived and we set off north for Scotland! My parents liked hill-walking so the Highlands was an exciting place for them too, but no way were they anything like as excited as I was. On the journey north I amused myself by counting Kestrels. In those day they were the raptor commonly seen along our motorways, sadly not so many now, you’re more likely to see a Common Buzzard. At last we reached north-west Scotland and a chance to see new birds. At the very first loch we stopped, we noticed a gull on a rock and realised the bird was on a nest. Looking closely I was delighted to see it was a Common Gull – a lifer! My AA book had shown that the only place you could see these birds was in Scotland and here was one! What I had not realised at the time was that my book only showed the breeding distribution of the birds! Imagine my surprise when we got home and there in the field opposite our house was a Common Gull; I was learning! Sadly I didn’t see many of the amazing birds I had hoped for; not knowing where to look other than a tiny bit of colour on a very small map didn’t help much.

Somehow I managed to persuade my family that we should head east to RSPB Loch Garten to look for Ospreys. This was a dream come true for me. How many times had I looked at that painting in the AA book? It was a Holy Grail bird for me! We arrived at the reserve and walked to the hide and there was an Osprey! I was just over-the-moon, an Osprey, a real live Osprey in my binoculars! Of course, way back then Ospreys were rarer than Hen Harriers are in England today, so it was just brilliant to see one. But things got better, the RSPB Wardens picked up on how thrilled I was to see this rare raptor and asked if I would like to go to the forward hide – for wardens only – for a closer look. Of course I did and we crept through the pines trees to a tiny hide much closer to the nest. I looked through the telescope and had a full frame view of one of the Ospreys: wow!

Later the same year I had the chance to look for another of our rarest birds of prey, Red Kite. Yes in the early 1970’s the Red Kite was confined to small area in mid-Wales with just a few pairs breeding. Hard to believe now that these wonderful raptors are doing so well and I can now see them occasionally over Conwy Mountain. We spent two-and-a-half days touring the byways of mid-Wales scanning the skies and seeing many Common Buzzards but not a single kite. Again our information was very sketchy to say the least: we knew to look in mid-Wales and heard a rumour that the village of Tregaron might be a place to start. Half-way through our third day of looking we found ourselves on the mountain road above Tregaron in warm sunshine and enjoying a picnic. Then there it was, a Red Kite! Sandwiches were abandoned and we grabbed the binoculars as the beautiful raptor slowly glided over the hillside – what a bird! I can still see that first Red Kite even now after all these years.

So how has birdwatching changed since those distant days? I think the biggest change is the availability of information.  I remember being desperate to find out more, particularly about where I could go to see birds. Not knowing any other birdwatchers my own age was a shame in hindsight; it would have been great fun to share my birds with someone my age. Hopefully these days it is easier to meet other young birdwatchers? I do hope so.