Today's 13 Years Wilde guest blog comes from Andy Clements who is the Director of the British Trust for Ornithology. The BTO is a fantastic organisation and I feel very lucky to be a part of what they do. Andy is a great supporter of the younger BTO members and finds many ways to encourage us.  I have met Andy many times in quite a few places including Birdfair. AFON conferences and the the BTO Annual Conference, but my first ever contact with Andy was when he commented on the guest blog I did for Mark Avery when I was 10. In his comments he encouraged me to get more involved with the BTO surveys and since then I have learnt so much through volunteering in many BTO schemes. 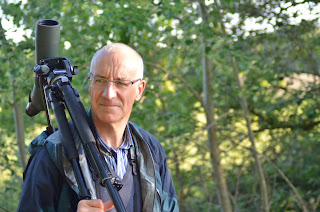 Three Cetti’s warblers were caught on the south coast of England in 1968 bringing the all-time British total to six - how things have changed. 1968 also saw the second year’s occupation of Bass Rock by the Black-browed Albatross. I was blissfully unaware of these ornithological tectonics, in my third year at secondary school with plane-spotting vying (unsuccessfully, thankfully) with the nature experience. Don’t laugh, I could have been a train-spotter!  It was the year of the last steam passenger train, notable because my Dad worked for British Railways, his career flourishing after beginning with firing those steam locomotives. The Viet Nam war was raging, Martin Luther King was shot dead and the only Apple products were Beatles LP’s on their new record label. Led Zeppelin began climbing their stairway to heaven….

We lived in Derbyshire at the time, and I was boarding at Haberdashers’ Aske’s school in North London, struggling to escape a northern accent, my National Health glasses persona, and to establish some sporting credibility. Being a birdwatcher didn’t help. At home in the holidays I could be myself, exploring the countryside by bike and monitoring a local patch, although I didn’t realise that was what I was doing. I clearly recall the day my YOC silver and grey Kestrel badge arrived, giving me permission to follow my hobby. My patch was Egginton Gravel pits where I first experienced wader passage discovering Green Sandpiper which should have been there, and Oystercatcher which, I thought, should not. These early experiences alerted me to the seasonal movements of birds, and to the inadequacy of Field Guide distribution maps. Information on which birds were where was sparse with a much rarer shorebird, a Killdeer, slipping through my patch without me knowing until years later.

So, how did I get from those shaky first steps to here? Like so many others it was the influence of an important mentor, mine in the shape of my biology teacher Barry Goater. Not only did his teaching shape my future career - zoological science, conservation and leadership - but he encouraged me to start a school bird club. Trips to local reservoirs and country parks brought my first Water Rails, Black Terns and Willow Tits and, in future years, we ventured further afield around East Anglia, the New Forest and even to Shetland - obsession was born. Highlights were finding a local Hoopoe, and finding our very own Snowy Owl on Ronas Hill, Mainland Shetland before visiting the known breeding pair on Fetlar. And it wasn’t just birds. Helping with moth-trapping and creeping through Breckland forest looking for Military Orchid ignited passions that remain with me 45 years later.

From where I am now, it all seems very different for the young naturalists of today. I’m glad we have passed the point where there is general lament about the lack of a new generation, and are celebrating today’s nature stars through initiatives like 13 years Wilde, AFON and BTO’s engagement with young ringers, nest recorders and surveyors. I am inspired by the opportunity to talk regularly through social media with Fin, Ellis Lucas, Josie Hewitt, Evie Miller and many others, and to engage with the conservation contribution you make through your passion. I wish I was 13 years wild all over again!